UK Government is blasted for refusing to extend VAT freeze on medical PPE despite daily Covid cases rising above 20,000 and hospital beds filling up

By Vivek Chaudhury For Mailonline

The Government has been criticised for refusing to extend a VAT freeze on PPE, despite demand being higher than ever before as the country grapples with a spike in coronavirus cases.

An email seen by MailOnline to industry representatives from the Treasury confirmed that VAT of 20 per cent on PPE they manufacture would resume from 31 October.

The controversial decision means that the increase will be passed on to consumers for items such as medical-grade surgical masks, which have become mandatory in many areas of British life.

The Government introduced its VAT freeze on PPE on 1 May, initially stating that it would run until 31 October, to help cope with a surge in demand.

The Government has been criticised for refusing to extend a VAT freeze on PPE, despite daily Covid cases rising above 20,000 (file photo) 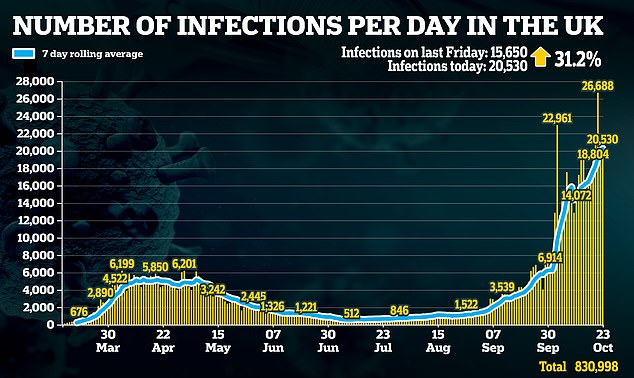 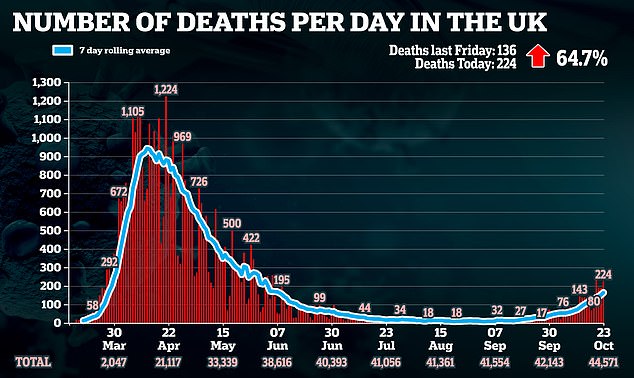 With the pandemic still gripping the country and the UK today announcing 20,530 more coronavirus cases and the deaths of 224 people, industry officials had been lobbying Government for an extension of the freeze – insisting that it was in the national interest.

There has also been a steady increase in the number of hospitalisations with the northern regions of England and the Midlands already reporting that they are at capacity.

James Bielby, Chief Executive of the Federation of Wholesale Distributors, which represents companies involved in purchasing and distributing PPE told MailOnline: ‘The Government’s decision means that the cost for PPE will be passed on to consumers.

‘We are still in the middle of the pandemic and in a period of restrictions across the whole country and believe that the VAT freeze on PPE needed to stay in place.

‘There is a compelling argument for this and valid reasons for it to continue. We will continue lobbying Government but are very disappointed with their decision.’

‘As one of those who pressed the Chancellor in the spring to get relief for PPE to help the care sector, it remains under pressure as we head into winter,’ the former minister said.

‘I would urge him to extend the VAT relief until we come out the other side of the Covid pandemic.

‘I am particularly concerned about care homes because they have an enormous demand for it.’

Both hospitals and care homes need medical-grade PPE supplies to ensure their staff, patients and residents are kept safe from the virus.

Early in the pandemic, reports of doctors and nurses using bin bags to protect their bodies and feet were commonplace due to a shortage in PPE for frontline staff.

The news of the imminent end to the VAT freeze comes shortly after it was announced that demand for beds has prompted the NHS Nightingale Hospital in Manchester to reopen in the next week as the city heads into a Tier Three lockdown.

Hospitals in neighbouring Liverpool are already treating more Covid-19 patients than in April.

A local NHS boss today announced the temporary hospital, set up in the Manchester Central Conference Centre, will be brought back into use before the end of next week. It will become the first one in England to reopen.

It had closed in June when the first wave of the UK’s outbreak burned out, but there are now fears that local hospitals will be inundated with Covid patients again.

The Nightingale will not be used to treat people seriously ill with coronavirus but instead opened to add capacity for ‘additional rehabilitation’.