UK heatwave: Experts warn of a spike in ozone pollution

The worst of the ozone will be concentrated just east of Britain, off the coast of East Anglia over the next few days, the service predicts.

Extremely high surface ozone pollution has already been experienced across western and southern Europe, particularly over the Iberian Peninsula and parts of northern Italy.

Ozone forms when heat and sunlight interact with greenhouse gases such as nitrous oxide, carbon monoxide and volatile organic compounds released during the burning of fossil fuels.

Ozone production accelerates during a heatwave, because these chemical reactions happen faster – posing a greater threat to human health.

CAMS also said wildfires have been increasing across southern Europe due to the heatwave, including those in Spain, France and even England.

Air pollution is spiking across Britain, France, and southern Europe amid record-breaking temperatures and scorching wildfires. Pictured are forecasts of daily maximum surface ozone concentration across Europe from July 19-22. The worst of the ozone is concentrated just east of Britain

Ozone (O3) – which causes a smoggy haze that can damage the lungs – is a molecule comprised of three oxygen atoms that occurs naturally in small amounts.

It is created by chemical reactions between oxides of nitrogen (NOx) and volatile organic compounds (VOC), found in exhaust fumes, in the presence of sunlight.

It’s already well known that at ground level, ozone can cause health problems for vulnerable people who suffer from lung diseases such as asthma.

Ozone is most likely to reach unhealthy levels on hot sunny days in urban environments.

Ozone (O3) is a molecule comprised of three oxygen atoms that occurs naturally in small amounts.

It’s already well-known that the ozone layer in the stratosphere, approximately 10-25 miles above the ground, protects life on Earth from the sun’s ultraviolet radiation.

However, at lower altitudes, it’s a component of air pollutant where it is one of the main elements of urban smog.

Surface-level ozone – which peaks during the middle of the day – is known to worsen respiratory and cardiovascular illnesses, and has been linked to increased mortality rates, says CAMS.

‘The potential impacts of very high ozone pollution on human health can be considerable both in terms of respiratory and cardiovascular illness,’ said Mark Parrington, senior scientist at CAMS.

‘Higher values can lead to symptoms such as sore throat, coughing, headache and an increased risk of asthma attacks.’

The concentration of an air pollutant (such as ozone) is given in micrograms (one-millionth of a gram) per cubic metre of air (µg/m3).

CAMS has said daily maximum values of surface ozone reached unhealthy levels in mid-July in Portugal, Spain and Italy, with some locations measuring in excess of 200 μg/m3.

This is twice the maximum exposure amount set by the World Health Organization – 100 μg/m3. 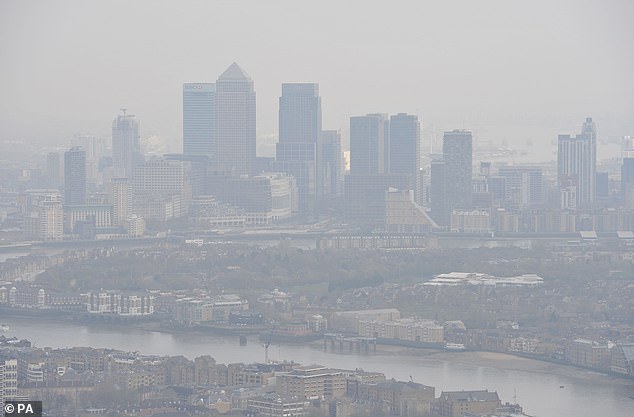 Ozone (O3) causes a smoggy haze that can damage the lungs. Ozone is most likely to reach unhealthy levels on hot sunny days in urban environments. Pictured is smog over London 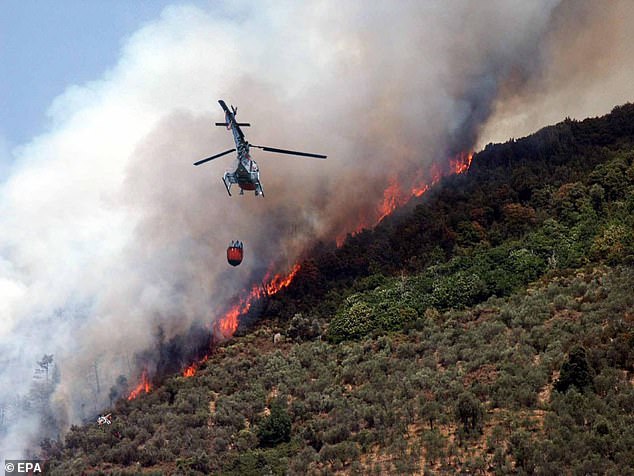 CAMS has also said wildfires have been increasing across southern Europe due to the heatwave. Pictured, fires burn in the areas of Massarosa and Bozzano, Italy, July 19, 2022

Ozone pollution causes approximately one million deaths per year, according to a 2017 study in Environmental Health Perspectives.

This is about one in five of all respiratory deaths, and substantially larger (125%) than prior estimates, said the authors, from Stockholm Environment Institute at the University of York.

Long-term exposure to ozone pollution is responsible for 55,000 premature deaths annually in Europe, according to another 2019 study in the journal Environmental Research Letters.

The study found that ozone pollution-associated mortality could be 11 per cent higher in some central and southern European countries in 2050 due to climate change.

However, if emissions of greenhouse gases are slashed, ozone-related deaths are projected to decline.

Another 2020 study in the BMJ said ozone pollution could be responsible for 6,000 deaths in over 400 cities in 20 countries each year.

Concentrations are forecast to ease across the Iberian Peninsula; however, they have been pushing above 120 μg/m3 across northern and western parts of Europe – such as Southeast England, northern France, and the ‘Benelux’ region (Belgium, the Netherlands and Luxembourg) – since 18 July.

In these regions, ozone concentrations are forecast to peak between 18 and 20 July before easing, according to CAMS.

As well as increased ozone pollution, dry conditions and extreme heat, the European heatwave is also exacerbating the scale and intensity of wildfires in southern Europe, especially in southwestern France, Spain and Portugal.

The worst affected regions to date include the Gironde region south of Bordeaux, Extremadura and Galicia in Spain, and parts of Portugal.

It’s revealed that wildfires in Spain have produced more carbon emissions in June and July this year than in the same period of any year between 2003 and 2021.

Fires in Spain produced 1.3 million tonnes of carbon emissions from June to July 17, the highest amount for June-July in any year since Copernicus’ dataset began in 2003.

With more than 30 fires still raging as of Tuesday, Spain has already smashed through its previous record of 1.1 million tonnes of carbon emissions in June-July 2012.

‘The emissions for Spain are already higher than what they have been in the last 20 years,’ Copernicus senior scientist Parrington told Reuters. 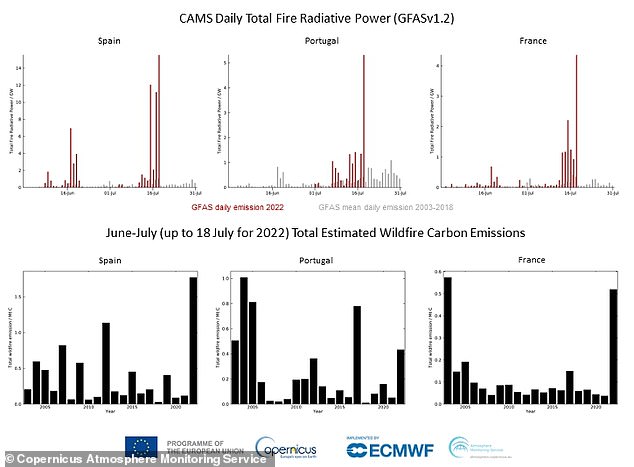 Top row: Fire Radiative Power (a measure of the rate of radiant heat output from a fire) for France, Spain and Portugal. Bottom row: Wildfire carbon emissions for the same countries for June and July

Morocco has also set a new record of 480,000 tonnes of carbon emissions from wildfires in June-July this year, the highest during any June-July period in the last two decades.

Climate change is exacerbating the hot and dry conditions that spur fires to spread faster and burn longer.

In turn, the fires emit more greenhouse gases that heat the planet and air pollutants that cause cardiovascular and respiratory problems.

‘Smoke particles are one of the most toxic forms of particles we can generate,’ said Athanasios Nenes, an atmospheric chemist at the Swiss Federal Institute of Technology Lausanne.

‘When you breathe them, they increase your chance of getting all kinds of cancers.’

People already suffering from cardiovascular or respiratory illnesses are also at a greater risk of flare-ups.