In another sign that the housing market has lost steam, 84,490 homes were sold in June, some 16,660 fewer homes than in June last year, when transactions stood at 101,150, according to the latest official figures by HMRC.

UK house sales have fallen by 16.5 per cent in the year to June

‘Until May, the figures for 2019 had been very similar to the figures for the same period in 2018, so this slowdown in activity has been quite abrupt,’ said Yopa property analyst Mike Scott.

The figures are in contrast to recent data from UK Finance showing little change in the number of mortgages completed in May compared to the same month in 2018.

According to Scott, that suggests that there’s been a sharp decrease in the number of homes bought for cash, which he said ‘tend to involve buyers who are not in chains and have no pressing need to move, letting them delay their purchase’.

‘The most likely explanation is that the uncertainty of the impending Brexit deadline caused home-buyers, especially cash buyers, to hold back from agreeing purchases in the first three weeks of March, before an extension was agreed, and that these delayed sales would otherwise have gone on to complete in May or June,’ he added.

‘Some transactions are happening but the volumes are not there as people can’t afford to move.

‘Affordability is an issue, coupled with uncertainty around Brexit, which is having a significant impact on people’s lives and decisions about whether to move or not.’ 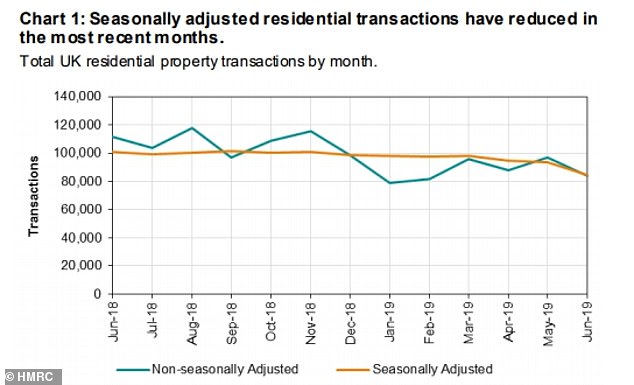 House transactions have been in decline in recent months

House transaction figures are generally a more reliable test of the housing market strength than house prices as the latter are more prone to fluctuation.

‘Scary reading on the face of it, but it’s important to note that this data is reported with a bit of a lag and so the level of transactions being relayed are really those accepted back in March,’ he said.

‘With many of us, perhaps foolishly, believing we would be exiting the EU at the end of March, it stands to reason that the vast majority of buyers may have refrained from a sale until this event had passed.

‘Therefore any dip in transactions should be viewed as a momentary stutter and with many other market indicators suggesting a return to form and growing levels of buyer demand over the last few months, we should start to see the number of properties being sold climb from here on in.’