Britain is close to giving up hope of striking a post-Brexit trade deal with the EU as Boris Johnson runs down the clock to his July deadline.

The Government is assuming there will not be a deal and expects it will trade with the bloc on WTO terms when the transition period ends on December 31.

Senior sources told The Daily Telegraph that a ‘basic’ agreement remains possible if the European gives ground in the autumn.

Britain is currently bound to EU rules during an 11-month period known as the transition which cannot be extended beyond this year.

Talks between Britain and Europe, led by the UK’s David Frost and the EU’s Michael Barnier, began on Monday and are due to finish tomorrow.

But negotiators remain deadlocked on fishing rights, the deal’s governance, the European Court of Justice’s role and so-called level playing field – with neither side seemingly prepared to budge as time runs out for Britain before the July deadline.

This means the UK could crash out of the customs union and single market without a post-Brexit trade deal with the EU in place before the end of transition.

The Government is assuming there will not be a deal and expects it will trade with Europe on WTO terms when the transition period ends on December 31. Senior sources claim a ‘basic’ agreement remains possible if the European gives ground in the autumn 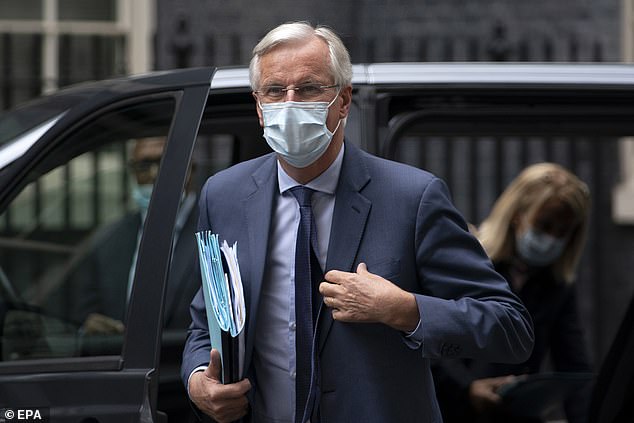 Talks between Britain and Europe, led by the UK’s David Frost and the EU’s Michael Barnier, began on Monday and are due to finish tomorrow. But negotiators remain deadlocked on fishing rights, the deal’s governance, the European Court of Justice’s role and level playing field – with neither side prepared to budge as time runs out for Britain before the July deadline

Trading on WTO terms would mean tariffs on goods and red tape that could lead to delays in goods entering and leaving the UK – a price Mr Johnson is willing to pay if the EU does not back down on issues like UK laws and fishing waters.

Britain has so far rejected Brussels’ demands for level playing field guarantees amid fears that matching European standards on tax, labour rights and environment will prevent it from forging its own rules after Brexit.

What is the transition period? And why does it matter so much?

Though the UK ‘left’ the EU on January 31, it remains in the EU customs union and single market during transition.

Britain has left the European Parliament and European Commission, but it is still following EU rules during transition – eg., the European Court of Justice is the final legal arbiter.

The transition also means the UK contributes to the EU budget.

While in transition, the UK remains in the EU customs union and single market. The transition cannot be extended beyond December 31.

If a post-Brexit trade deal is not struck by then, the UK will crash out without a deal and will trade with the EU on World Trade Organisation terms.

The EU is also insisting that the Court of Justice must have a role in the UK-EU agreement, where decisions on the interpretation of EU law are necessary.

Some in the UK government claim the two sides could reach a deal in the autumn, but said it would be a ‘basic deal, not a phenomenal deal’.

A senior source told The Daily Telegraph: ‘The Government has been making it clear for a while now that it is prepared for no deal. Britain isn’t going to budge on fundamentals like fishing rights, so it’s all in the hands of the EU.’

A member of the UK’s negotiating team said: ‘We wanted to see an agreement this month. It’s clear from the EU side that’s not going to happen. No trade deal has to be the working assumption, because that’s what we have to prepare for. But it doesn’t mean it’s what we want or are working to make happen.’

Britain is pursuing trade deals with other countries and setting up its own sanctions regime, and has previously insisted it should not have to sign up to the bloc’s standards.

A spokesman for Mr Johnson claimed on Monday that Britain will continue to engage constructively with the EU in talks on a future relationship, but that London is not willing to give up its rights as an independent state.

The deadlock comes after the Institute for Government (IfG) warned that many British businesses were unprepared for the impact of a No Deal Brexit.

Falling off the cliff edge in December could throw UK plc into dire straits after the Government crashed the economy during the coronavirus lockdown.

Last week the IfG said three out of five firms had not even begun to prepare for the end of the transition period: ‘Since the pandemic took hold in February, and with the formal lockdown taking effect in late March, government and business resources have been focused on responding to the pandemic, rightly prioritising this over Brexit preparations.

‘Firms reeling from the economic consequences of coronavirus are poorly placed to prepare for Brexit: in many cases, in a worse position than in the months leading up to the potential no deal in October 2019.’