UK is in a ‘very good position’ against Covid variants

Britain is in a ‘very good position’ against coronavirus variants, researchers insisted today as Pfizer claimed there is no proof its current jab needs to be updated to fight mutant strains.

Public Health England data shows variant cases have remained low in recent weeks, despite a spike in infections triggered by the Indian B.1.617.2 strain.

But Professor Sharon Peacock, who leads the UK’s variant tracking programme, said there was no evidence to suggest it triggered more severe disease.

And another Cambridge expert added early studies indicated it was still susceptible to the current crop of vaccines being deployed in Britain.

BioNTech, the German firm partnering with Pfizer to make the coronavirus jab, today said in its latest financial report there was no evidence that its current jab needed to be tweaked to fight off variants.

But it said it was still monitoring the situation, in case a variant did appear that could get around vaccine-triggered immunity.

It comes after official data revealed almost half of all cases in London are now down to the Indian variants. 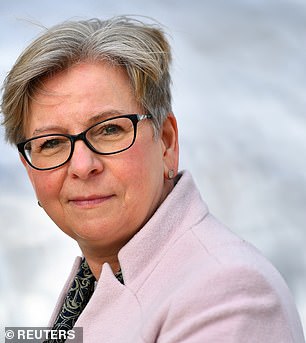 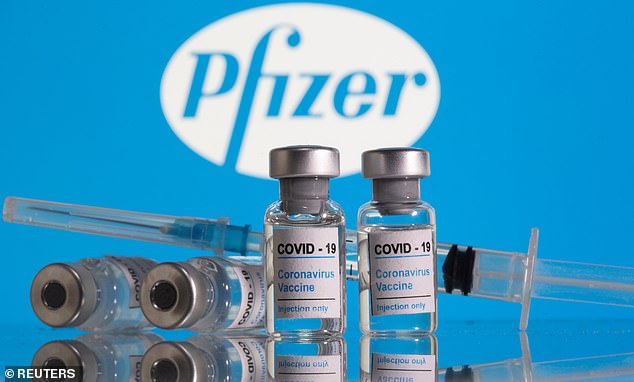 BioNTech said in their latest financial reports that the jab would block infections from variants in most cases, and almost all hospitalisations and deaths

DOES PFIZER’S VACCINE WORK AGAINST VARIANTS?

There is no evidence that Pfizer’s coronavirus vaccine needs to be updated to fight off variants, its developer said today.

BioNTech made the statement in its latest financial report, but said it was still monitoring variants.

But recent studies have suggested the jab also sparked significant protection against variants.

It was 75 per cent effective at blocking infections with the South African and Kent variant, studies in Israel and Qatar showed.

And almost 100 per cent effective at stopping hospitalisation and death.

Further studies found it was also effective against the Brazilian variant. although these were carried out on a small number of individuals.

But scientists say clinical studies are ongoing with results not expected for more than a week.

Speaking at a press conference for health journalists today, Professor Peacock said: ‘I think that, for me, looking at the overall landscape, I’m still very delighted that vaccines are working, that, you know, whatever is out there, vaccines are working, and disease rates are falling, so we’re in a very good position.

‘As scientists we just have to keep our eye on this so that we just maintain that trajectory.’

She added that simple moves such as washing hands and social distancing were still the best defences against the virus and its variants.

Discussing the Indian variant, she added: ‘I think the point to note is that this isn’t a special variant of concern that’s going to get around washing your hands and distancing and wearing a mask, and being in a well-ventilated place – I think that’s the key thing.

‘So, for me, the message is we just keep doing those things but we’re in a better position now because we have falling rates, and a good vaccination programme, which I would anticipate will just continue to increasingly protect our population.’

Cases of the three genetically similar Indian variants, particularly B.1.617.2, have risen rapidly since it was first spotted in the UK last month.

They accounted for more than 30 per cent of all Covid cases on May 9, according to variant tracker GISAID, up from five per cent a week ago.

But this is in the context of cases continuing to fall across the country amid a successful vaccine roll-out that has jabbed two in three adults — or 35million people.

BioNTech wrote in its latest report: ‘To date, there is no evidence that an adaptation of BioNTech’s current Covid vaccine against key identified emerging variants is necessary.’

The firm added that there was a ‘comprehensive strategy to address these variants should the need arise in the future’.

It came after the CEO Ugur Sahin said the company was still monitoring mutant strains to ensure it could react quickly if any troublesome ones appeared.

Scientists are spooked by variants because they carry key mutations that change the shape of their spike protein, which antibodies bind to to stop infections.

Lab studies already suggest fewer antibodies are made in response to some variants, raising fears that a variant could beat vaccine-triggered immunity.

But experts have stressed these studies exclude other parts of the immune system — such as T-cells — which also play a key role in fighting off viruses. 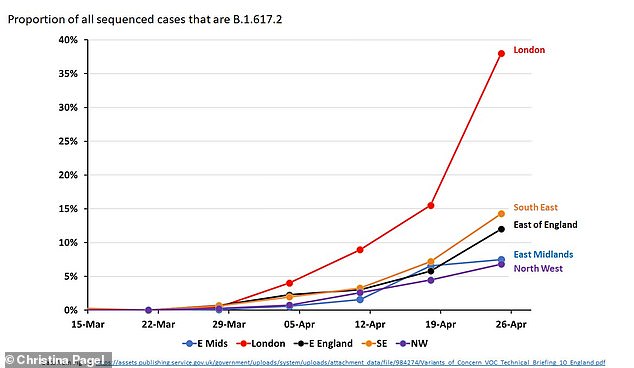 Professor Christina Pagel, a mathematician at University College London and member of Independent SAGE, produced this graph using PHE data to show that the proportion of Covid cases being caused by the Indian variant type .2 has surged to almost 40 per cent 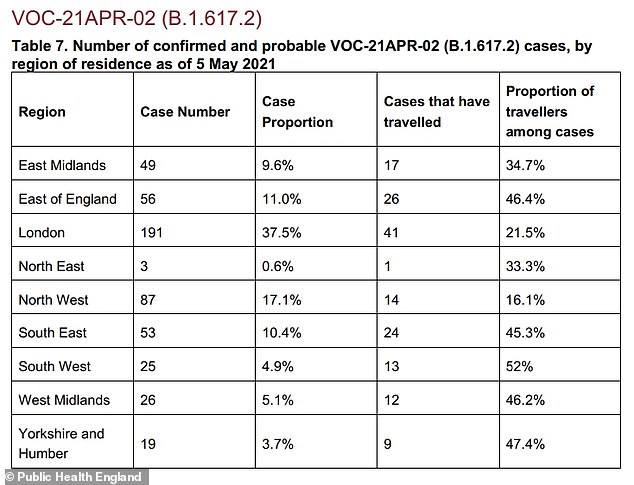 Public Health England figures reported on May 5, taken from tests up to around April 27, show that fewer than half of cases have been in international travellers in most areas

Studies in Israel and Qatar where most residents have been jabbed found Pfizer’s shot was up to 75 per cent effective at blocking infections with the South African variant (B.1.351), and also warded off most cases with the Kent variant (B.1.1.7).

It was more than 97 per cent effective at blocking hospitalisations and deaths in infections with either variant.

This is a slight drop from the 95 per cent figure from trials, but still far above levels for many jabs such as the flu shot which is often less than 50 per cent effective.

There is currently no evidence that the Belgian-made jab is less effective against either of the three Indian variants.

It is based on mRNA technology, which uses the body to produce harmless Covid spike proteins.

These trigger an immune reaction against the virus, ensuring the body has defences should the real virus come along.

Britain expanded its order of Pfizer jabs by another 60million in February to provide booster shots for the country this Autumn.

This brings the total to 100million doses, the same as for the Oxford/AstraZeneca vaccine.