UK is to blame for 55% of Europe’s ‘gonorrhoea epidemic’

Gonorrhoea cases shot up by 13,000 across Europe last year as figures show the UK continues to be the continent’s clap capital.

And the UK’s rate is more than three times as bad, with 74.7 in every 100,000 people diagnosed with the painful sexually transmitted infection.

One European expert said the new figures are just the tip of the iceberg and don’t show the true scale of the issue.

Another told MailOnline the rising popularity of online dating and apps, such as Tinder and Grindr, could be fuelling an increase in unprotected casual sex.

The UK had almost 50,000 cases of gonorrhoea in 2017, making up 55 per cent of the continent’s total and adding up to more than five times as many as second-placed France

Britons having sex without condoms have left the nation with more gonorrhoea infections than all other European countries combined.

Second to the UK was France which, despite having about the same population as the UK, had just 9,177 recorded gonorrhoea diagnoses.

The figures were released in an annual surveillance report published by the European Centre for Disease Prevention and Control.

ECDC expert Gianfranco Spiteri said: ‘We have to bear in mind that the numbers we see do not even show the true extent of the gonorrhoea epidemic in Europe.

‘Many infections are not diagnosed due to lack of symptoms or limited access to diagnostics or simply are not reported.’ 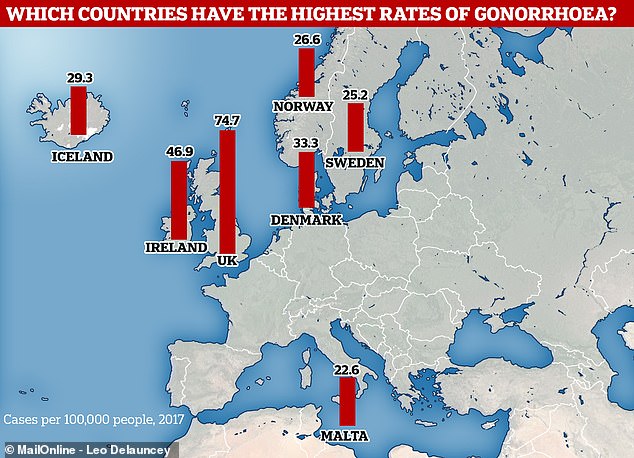 Figures revealed by the European Centre for Disease Prevention and Control show the UK has the highest rate of gonorrhoea, which more than 74 cases per 100,000 people, followed by Ireland (47) and Denmark (33)

Among 27 EU and EEA (European Economic Area) countries compared in the report, Cyprus had the lowest rate of the infection, with just two officially recorded cases – 0.2 per 100,000 people.

Gonorrhoea is a sexually transmitted infection (STI) caused by the bacteria Neisseria gonorrhoeae or gonococcus.

This bacteria is usually found in discharge from the penis or vaginal fluid.

The bacteria can infect the cervix, urethra, rectum, throat or eyes.

It can also spread from pregnant women to their unborn babies.

As the bacteria cannot survive outside the body for long, gonorrhoea is not spread by kissing, hugging, sharing towels, toilet seats or swimming.

Around one in 10 men and half of women experience no symptoms.

However, these can include:

Treatment is usually a single antibiotic injection and tablet.

Gonorrhoea can be prevented by using condoms during sex and not sharing sex toys.

An expert from the British Association for Sexual Health and HIV told MailOnline the popularity of online dating could be to blame.

‘The increases in gonorrhoea likely relate to an increase in frequency and number of partners, perhaps facilitated by online dating and hook-up apps.’

He said there isn’t data which suggests people in the UK are more promiscuous than elsewhere, and said higher rates may reflect better diagnosis and recording of the infections.

Dr Lawton said the infection rate shouldn’t be a source of shame.

He added: ‘Shame is not a word that should ever be associated with sexually transmitted infections.

Almost half (47 per cent) of all Europe’s gonorrhoea infections were diagnosed among gay men.

Cases among women rose by 15 per cent in the year from 2016 to 2017, which experts said was concerning because of its potential impact on fertility.

Estonia is the only country in which more women got the infection than men – all others, and the EU on average, had higher rates among males.

Gonorrhoea, known as the clap, is the second most common STI in the UK, after chlamydia.

Symptoms tend to include pain when urinating, unusual discharge which may be white, green or yellow, or pain around the genitals.

The infection most commonly manifests in the reproductive organs but can spread elsewhere in the body – if left untreated for a long time it can lead to infertility.