The UK new car market rose in August for the first time in seven months, according to fresh figures from the Society of Motor Manufacturers and Traders.

Overall growth of 1.2 per cent in the month was driven largely by battery electric vehicles, which recorded a 35.4 per cent upturn in volumes and a 14.5 per cent market share.

But, growth in this segment is slowing, with a year-to-date increase of 48.8 per cent compared to first quarter BEV registrations growth of 101.9 per cent.

The monthly growth was the first seen since February, with 68,858 new vehicles joining the road during what is typically the second quietest month of the year as many buyers choose to wait for the latest numberplate release in September.

Superminis remained the most popular vehicle class, growing market share to 34 per cent, as 7.4 per cent more of them were delivered to customers than in August 2021, the SMMT said.

Multi-purpose, luxury saloon and lower medium vehicles also recorded growth of 31 per cent, 1.5 per cent and 1.3 per cent respectively, while registrations of all other segments fell.

In the year to date, registrations are down by 10.7 per cent on last year at 983,099 units, which is over a third lower than during the first eight months of pre-pandemic 2019. 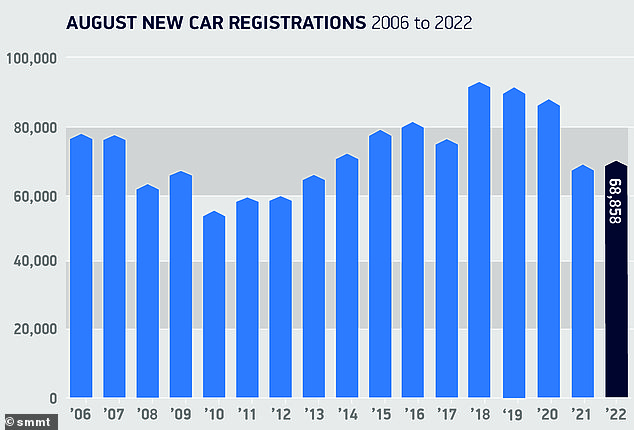 Shifts: A chart from the SMMT showing August new car registrations over the years

What would you choose? The VW Polo and Ford Puma were popular in August, the SMMT said

The auto market has been spiralling amid the cost-of-living squeeze in Britain and the impact of persistent chip shortages across the globe.

‘Spiralling energy costs and inflation on top of sustained supply chain challenges are piling even more pressure on the automotive industry’s post-pandemic recovery, and we urgently need the new Prime Minister to tackle these challenges and restore confidence and sustainable growth.

‘With September traditionally a bumper time for new car uptake, the next month will be the true barometer of industry recovery as it accelerates the transition to zero emission mobility despite the myriad challenges.’

‘This, coupled with on-going global supply constraints and semi-conductor shortages, has meant another month of low registration volumes, although moderate growth has been recorded.

‘The increase in petrol and diesel prices which we have experienced the past few months has resulted in sustained growth for EV sales, as people turn to greener, cheaper alternative modes of transport. Consumers are encouraged to visit an Electric Vehicle Approved dealer as they are best equipped to address this demand and provide a wide range of choice, price point, and knowledge for customers.’

Carwow’s consumer editor, Hugo Griffiths, said: ‘With the headwinds the UK automotive industry has been facing in recent years, any improvement in new-car registrations is to be welcomed.’

He added: ‘Some of the more granular aspects of August’s data are also illuminating: the rate of growth of EV registrations may have slowed last month compared to the first quarter, but it’s encouraging to see that one in five new cars registered in the UK was either a pure EV or a plug-in hybrid given these will be the only types of car allowed to be sold from new in a little over seven years’ time.

‘This does highlight, however, the amount of work that lies ahead, as industry and Government need to usher the remaining 80% of buyers into electrified vehicles by 2030.’

Ian Plummer, a commercial director at Auto Trader, said: ‘The SMMT’s sales figures highlight just how much the industry’s ongoing supply challenges remain the key factor holding back the market.

‘But energy price rises are beginning to bite ahead of October’s surge in the energy price cap, and our data is beginning to show early signs of a waning of appetite for electric vehicles as buyers weigh up higher charging costs against running a traditionally fuelled vehicle.’ 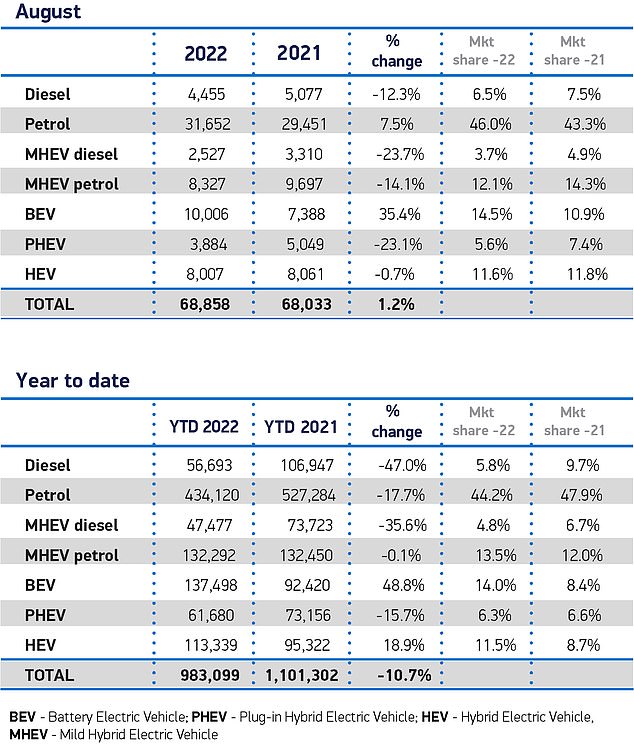 Options: Tables showing new car registrations by fuel type in August and the year to date