UK OFFICIALLY in recession after plunging by shocking 20.4%

Rishi Sunak warns of looming jobs catastrophe as UK economy OFFICIALLY goes into recession after plunging a shocking 20.4% at height of coronavirus outbreak – wiping out 17 YEARS of GDP growth

Rishi Sunak warned of a looming jobs catastrophe today as it was revealed the British economy plunged by more than a fifth at the height of the coronavirus outbreak.

Figures showed UK plc shrank by 20.4 per cent in the three months to June, the biggest fall in modern history, with record reductions in construction, services and production.

The news confirms that the country is officially in recession, which is defined by two consecutive negative quarters.

The economy dipped 2.2 per cent in the first three months of the year, and is now smaller than it has been since 2003.

However, there was a glimmer of hope as the single month figure for June bounced back by 8.7 per cent.

The Chancellor said the tumble showed that ‘hard times are here’ and warned many more jobs will be lost.

‘Hundreds of thousands of people have already lost their jobs, and sadly in the coming months many more will.

‘But while there are difficult choices to be made ahead, we will get through this, and I can assure people that nobody will be left without hope or opportunity.’

Boris Johnson has already warned that the country is in for a ‘bumpy’ ride, but insisted the government is ready to make ‘colossal’ investments in the future.

The plummet – the biggest in modern history – is roughly in line with the Bank of England’s predictions.

The grim picture emerged after figures yesterday showed that the number of people on company payrolls had fallen by 730,000 since lockdown –  with employment seeing the biggest drop in a decade.

Official figures showed UK plc shrank by 20.4 per cent in the three months to June 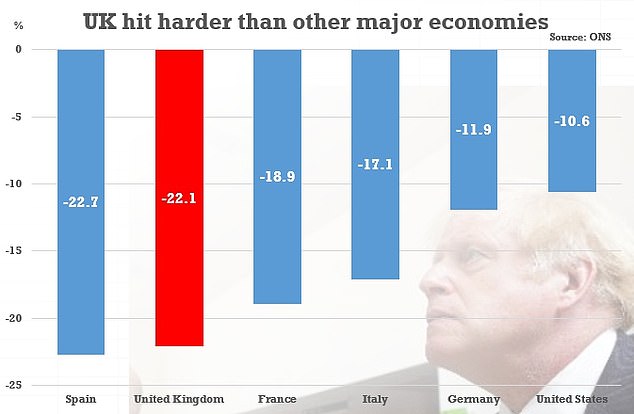 In the three months to June, the number in work decreased by 220,000 – the largest quarterly slump since 2009. Total hours worked slumped by a fifth over the quarter to the lowest level since 1994.

Meanwhile, the numbers on payroll tumbled another 114,000 in July, as the claimant count – which includes some people who are in work – increased again to reach 2.7million.

Underlining the misery, store chain Debenhams has announced that it is cutting 2,500 roles.

However, analysts warned the grim news is the tip of the iceberg, as the full effects of lockdown have so far been masked by the government’s massive support schemes.

The latest figures today showed that 9.6million jobs have been furloughed, with the Treasury paying out £33.8billion in subisidies.

Many people appear to have chosen to stay economically ‘inactive’ rather than hunt for work – meaning they remain outside the headline unemployment figures. 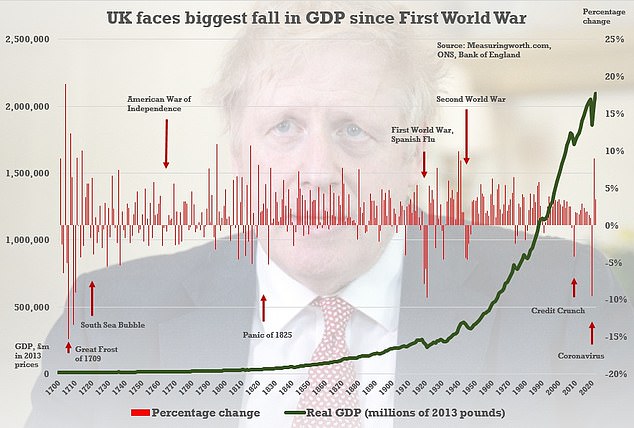 GDP figures show UK has entered a technical recession – with two consecutive quarters of contraction. The Bank of England predicts that the downturn will be the worst in a hundred years (chart pictured)