The UK is set to become the first country in the world to deliberately infect healthy volunteers with the coronavirus, the Government has confirmed.

Up to 90 volunteers would receive a dose of Covid-19 through their nose – a common transmission route – in challenge trials aiming to find the ‘lowest possible safe dose’ before an infection is triggered.

It is hoped the trials, if approved by regulators, will ramp up efforts to develop a vaccine, with the first only expected at the start of next year.

During the trial, earmarked to start in January, the volunteers will stay at a specialist diseases clinic in the Royal Free hospital, London, where their symptoms will be closely monitored. Results would be expected in May next year.

Professor Peter Openshaw, from Imperial College London, said the study aims not to get people ill but to ‘get the virus to replicate in the nose’.

‘We think that by taking every precaution we can really limit the infection and then we should be able to do it quite safely given the vast amount of experience that we have in this field,’ he said.

Challenge trials were pioneered in the 18th century by scientist Edward Jenner who exposed the eight-year-old son of his gardener to a virus to establish whether his experimental vaccine was effective.

Up to 90 volunteers will receive a dose of the virus through their nose at a specialist clinic in London. Scientists want to find the lowest possible dose required to trigger an infection (stock)

Volunteer, 18, says they signed up to ‘bring the world out of the pandemic’ 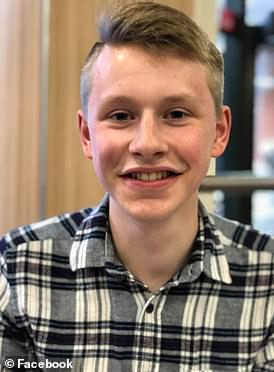 Alastair Fraser-Urquhart, 18, has volunteered for the challenge trials

Challenge trial volunteer Alastair Fraser-Urquhart, 18, has revealed he signed up for the trials to ‘bring the world out of the pandemic sooner’.

Speaking to BBC Radio 4, he revealed the trial will involve him being locked in the clinic for at least two weeks while his body’s response is monitored.

‘I’ll be remaining at the clinic, really, for as long as it takes,’ he said.

‘Obviously we can’t have it infecting anyone who isn’t a part of the trial, so every volunteer would need to be held in bio-containment.’

Explaining why he signed up he said the trials could save ‘thousands of lives’.

‘It was just something that made instant sense to me, really,’ he added.

The volunteers are aged between 18 and 30 – the group thought to be least at risk from SARS-CoV-19.

After receiving a dose, they will be required to stay at the clinic for two-and-a-half weeks while their symptoms are monitored. This is also to stop them spreading the virus in the wider community.

Access to the clinic will be tightly controlled through a specific entrance, careful decontamination upon entry and exit, a dedicated laboratory for tests and specialist air filtration to ensure there is no risk to anyone nearby.

The volunteers will be paid for their time in the lab.

Professor Openshaw told BBC Radio 4’s Today programme the trials could give a ‘really firm idea’ of whether a vaccine will work and how it will work.

‘There are so many vaccines now in field trials in the Phase III trials as we call them – which determine whether the vaccine is actually effective at preventing infection – but I think the vaccines that come through in the next three or four months won’t actually be the vaccines that we’re using in two to three years time.

‘So we need ways of aligning new vaccines against vaccines of proven efficacy and determining what it is that makes them work.’

He added that it is ‘likely’ a vaccine study will report its results before Christmas, with the likelihood being that it is rolled out to the most vulnerable at the start of next year.

‘I would be surprised if some of those vaccine studies don’t report this side of Christmas’, he said, ‘and of course some of those vaccines have been pre-purchased and pre-batched ready for distribution against the possibility that they are going to be found to be effective in the phase III trials’.

‘I think there  will be limited stocks of vaccine which will be available for high risk people in the early part of next year, but of course there won’t be sufficient vaccine to roll out a full vaccination programme.’

The Government has put £33.6million behind the challenge trials, which will start next year if they are approved by regulator the Medicines and Healthcare Regulatory Agency and ethics body the NHS Health Research Authority.

Imperial College London will sponsor the first part of the study, where volunteers are infected with Covid-19, before moving on to the second stage where vaccinated volunteers will be exposed to the virus.

The study is being designed by HVivo, a subsidiary of Dublin-based pharmaceutical company Open Orphan, which today announced it had secured funding from the Government.

Professor Jonathan Van-Tam, the UK’s deputy chief medical officer, said the trials ‘may help in the search for safe and effective vaccines’.

‘First, for the many vaccines still in the mid-stages of development, human challenge studies may help pick out the most promising ones to take forward into larger Phase III trials.

‘Second, for vaccines which are in the late stages of development and already proven to be safe and effective through Phase III studies, human challenge studies could help us further understand if the vaccines prevent transmission as well as preventing illness.’

Announcing the Government funding today, Business Secretary Alok Sharma said: ‘We are doing everything we can to fight coronavirus, including backing our best and brightest scientists and researchers in their hunt for a safe and effective vaccine.

‘The funding announced today for these ground-breaking but carefully controlled studies marks an important step in building on our understanding of the virus and accelerating the development of our most promising vaccines which will ultimately help in beginning our return to normal life.’ 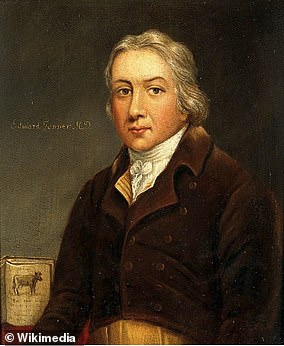 Edward Jenner pictured in a portrait

Esteemed scientist Edward Jenner used the eight-year-old son of his gardener for the first ever challenge trial, with just a hunch as to whether it would be successful.

Luckily, it worked. And the study led to the invention of the smallpox vaccine,  which saw the debilitating disease eradicated in 1977, more than a hundred years later.

The life-threatening condition caused fever, vomiting, mouth sores and fluid-filled blisters to appear on the skin which would then develop scabs.

Victims would be left with life-long scarring on their skin, and 30 per cent of all those who suffered from the disease would eventually die.

But, after the vaccine was administered worldwide, deaths from smallpox plunged from 150million in the 1950s to zero today.

How did the first challenge trial come about?

Edward Jenner had the idea for the trial after hearing about an old country tale, which said milkmaids who caught cowpox from the animals would never catch smallpox.

Cows infected with the mild infection had a few weeping spots (pocks) on their udders, but suffered little discomfort. Milkmaids occasionally caught it from their animals and felt off-colour for a few days, but could then return to work unscathed.

Mr Jenner thought he would test the affect of cowpox as a vaccine by purposefully infecting someone with it, and then exposing them to smallpox so he could monitor their response.

What happened in the first challenge trial?

In May 1796 a milkmaid, Sarah Nelmes, came to Mr Jenner about a rash that had appeared on her hand. He diagnosed cowpox and Ms Nelmes confirmed that one of her cows, Blossom, had recently suffered from the disease.

Spotting his chance Mr Jenner asked his gardener’s eight-year-old son, James Phipps, to take part in the experiment. On May 14 he made a few scratches in the boy’s arm and inserted some skin samples from the rash on Ms Nelmes’ hand.

The boy then became mildly ill with cowpox, but recovered a few days later.

On July 1 Mr Jenner exposed his gardener’s son to smallpox, to discover whether his trial had been successful. Fortunately, the boy did not develop smallpox on that occasion, or the many times he was tested afterwards.