Experts at the National Cyber Security Centre (NCSC) had to deal with 1,131 incidents in the last year.

Officials classed 590 of the reported incidents as significant, with more than 30 assessed as serious enough to require a cross-government response.

Key national institutions such as the NHS and the UK and Scottish Parliaments were among those targeted, a report by the NCSC revealed.

Small and large businesses were also hit by cyber attacks.

Experts at the National Cyber Security Centre had to deal with 1,131 incidents in the last year – with 590 classed as significant (stock photo)

The NCSC is part of Britain’s eavesdropping service, GCHQ, whose director Jeremy Fleming warned the threats to the UK are ‘evolving rapidly’.

He said: ‘The threats to the UK are evolving rapidly as technology advances. Our response has been to transform to stay ahead of them.

‘The NCSC is a pivotal part of that transformation.

‘It is a critical component not only of GCHQ, where it benefits from the data and expertise it has access to as part of the intelligence community, but of how the government as a whole works to keep the UK safe.’

He said the NCSC had made ‘enormous strides’ in increasing and improving UK cyber capabilities.

He added: ‘It is in the frontline in protecting the UK against a growing number of cyber attacks.’

The most high-profile episode was the global ‘ransomware’ outbreak which affected dozens of NHS trusts in May.

In June, email accounts were targeted in an attack on parliamentary networks.

He said: ‘Cyber security is crucial to our national security and to our prosperity.

‘We’re incredibly proud of what we have achieved in our first year at the National Cyber Security Centre, bringing together some of the best cyber-security brains in the country in a single place.

‘But the threat remains very real and growing – further attacks will happen and there is much more for us to do to make the UK the safest place in the world to live and do business online. ‘ 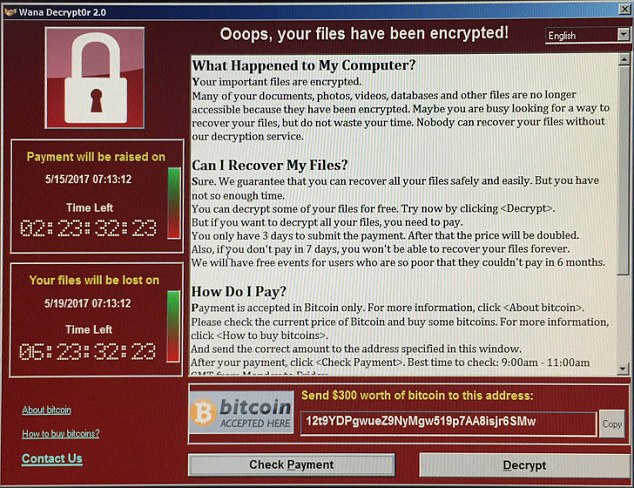 The NCSC was established to spearhead efforts to counter the mounting danger from cyber-criminals and hostile states.

In a report published on Tuesday, the centre sets out its activity in its first year and summarises the shape of the current threat.

It says: ‘There are now more devices connected to the internet than there are people in the world and with the growth of our dependence on technology comes an increased risk.

‘Despite the NCSC’s best work in defending the country from that threat, we can’t prevent every attack.’

The assessment underlines how threats can originate from a range of sources, including cyber criminals or nation states that ‘may seek to exploit UK organisations to further their own agenda and prosperity’.

It warns: ‘Campaigns by nation states can be persistent, including espionage and intellectual property theft that take place over many years and use significant technical capability.

‘Nation states are also starting to explore how cyber operations can support a disruptive and destructive strategy.’

As well as managing hundreds of incidents, the NCSC has prevented thousands of attacks through its active cyber defence programme, it says.

Tens of millions of suspicious communications are being blocked every month under a partnership with the private sector.

The centre has also produced more than 200,000 protective items for Armed Forces communications.

Earlier in the year the defence secretary said the UK could carry out military strikes in response to cyber attacks.

Sir Michael Fallon told the Chatham House think tank the UK had the ability to respond to hackers ‘from any domain – air, land, sea or cyber’.