A freak storm in the Mediterranean at the start of April has led to a drop in the number of sightings of swallows, swifts and other migrating birds in the UK.

In April thousands of birds migrating from Africa to Europe died due to high winds battering Greece – they were blown off course and found dead in the streets.

The British Trust for Ornithology, which tracks migrating birds as they arrive in the UK, say they’ve had reports from the across the UK of a drop in bird numbers.

They say that sightings of swallows, swifts and house martin numbers were all down and that the ‘disastrous storm’ in Greece is the most obvious cause.

However, they warn that this is purely anecdotal evidence as they haven’t been able to conduct proper surveys due to coronavirus lockdown measures.

A freak storm in the Mediterranean at the start of April has led to the number of sightings of swallows (pictured), swifts and other migrating birds falling in the UK

A spokesman for the BTO told DevonLive that they were getting calls from across the UK from people asking ‘where are our swallows’.

It was thought at the time that birds arriving in the UK from Africa wouldn’t be affected by the storm – but it now looks like that prediction was wrong.

Initially bird experts assumed birds flying to the UK from Africa took a different route to those flying to the Mediterranean but the BTO says ‘it’s time for a rethink’.

‘We always think the birds probably come up through Spain and France but we don’t really know,’ a BTO spokesman told DevonLive.

‘If ever we get the technology we might find that more come through East Africa than West,’ he said.

Over a period of three days in early April over the Aegean Sea thousands of small birds birds were found dead or severely injured.

Southerly winds pushed flocks of birds from north Africa into air currents that left them exhausted and starving.

The RSPB says these migrating birds usually arrive in the UK in March and April but the lower than usual number of sightings could just be down to a late arrival.

‘Swallow numbers have fluctuated over the years, with the 80s famously seeing a decline in both swallows and house martins,’ an RSPB spokesman said.

‘They did seem to bounce back from this, so the fluctuations could be quite natural.’

‘However, since 2010 there has been a downward trend – this isn’t enough to indicate any long term trend in terms of conservation in comparison to other bird species that have suffered as a result of the climate and ecological crisis,’ he said.

This has been backed up by the BTO who say birds including Nightingale, Cuckoo and Swift are in particular decline according to their monitoring. 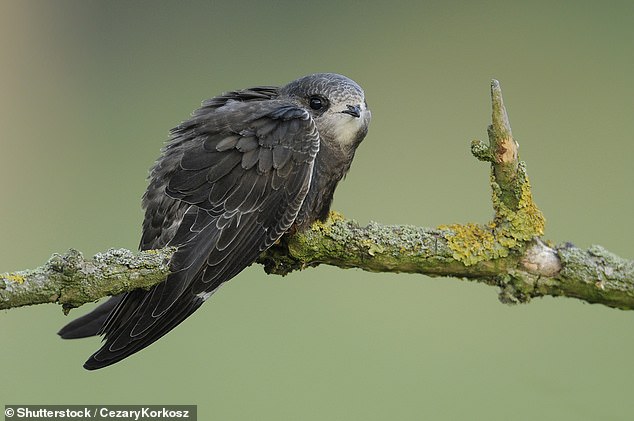 The British Trust for Ornithology, which tracks migrating birds as they arrive in the UK, say they’ve had reports from the across the UK of a drop in bird numbers including the swift (pictured)

The current decline in numbers, which they believe is linked to the storm in Greece, is only linked to this year – but there is a wider problem.

‘Many of these species occupy complex habitats such as woodland whilst they are breeding and they may be impacted by processes occurring anywhere in their annual cycle,’ the BTO wrote in a study.

‘They might use several sites separated by thousands of kilometers through the year and the processes driving declines may occur at several of these, and there may be interactions between events occurring at different stages.’

Bird experts say the current decline in the number of swallows could be due to a mixture of long term decline and the storm in Greece.

‘There have been so many anecdotal reports of fewer swallows that it suggests something has gone wrong,’ said a spokesman for the Devon Wildlife Trust.