The board of UK tech firm Blue Prism has hit back after a major shareholder lashed out at the proposed £1.1billion takeover by US private equity business Vista Equity Partners.

Coast Capital, which owns three million shares of Blue Prism, said last week it would not be voting in favour of the takeover and insisted the cash on offer for the business was ‘materially below consensus valuation’.

Blue Prism denied there was a ‘clear conflict of interest’. It agreed to the acquisition offer last month, urging investors to vote in favour of the bid worth 1,125p per share.

The offer for the multinational software corporation, which counts eBay and the NHS among its customers, was at a premium of more than 35 per cent to the stock’s price at the time of the initial approach in August.

Blue Prism was also previously in talks with TPG Capital over a possible offer.

‘The proposed transaction leads shareholders to question the board’s clear conflict of interest in unanimously supporting a transaction which values the company materially below consensus valuation, 52-week high, and its average price since IPO,’ Coast Capital said last week.

But, in a note to investors on Wednesday, Blue Prism said it reached out to 15 strategic parties and 12 financial sponsors during its sale process and that assertions of conflicts of interest were ‘entirely flawed’.

The firm’s board also claimed to be ‘experienced and unconflicted’, noting that it had ‘undertaken significant refreshment’ with the addition of three independent, non-executive directors this year. 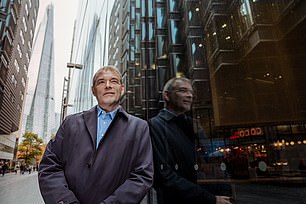 ‘The acquisition is in the best interests of Blue Prism shareholders, immediately delivering certain value without the execution risks associated with the necessary strategic investments envisaged.

‘The Board appreciates the constructive feedback it has received from Blue Prism shareholders and looks forward to further engagement with investors in the coming weeks.’