A heatwave set to hit Britain this week could beat the all-time temperature record for July, forecasters say.

Warm sunshine is predicted for much of England and Wales from today, with the mercury hitting 84F (29C) in south eastern areas. Further north, where rain is due to clear this morning, it could reach 79F (26C).

By Wednesday the warmest areas of southern Britain could reach 97F (36C) – and it could get even hotter still, raising fears of health problems for the elderly.

Even in the far north of England, temperatures could still hit the 80Fs (high 20Cs). The hot weather is being brought north from a plume of Saharan air which is already hitting parts of southern Europe.

England’s chief nurse Ruth May has urged people to check on their neighbours as a heatwave hits parts of the UK for the start of the school summer holidays, while Asthma UK urged sufferers to keep up their medication. 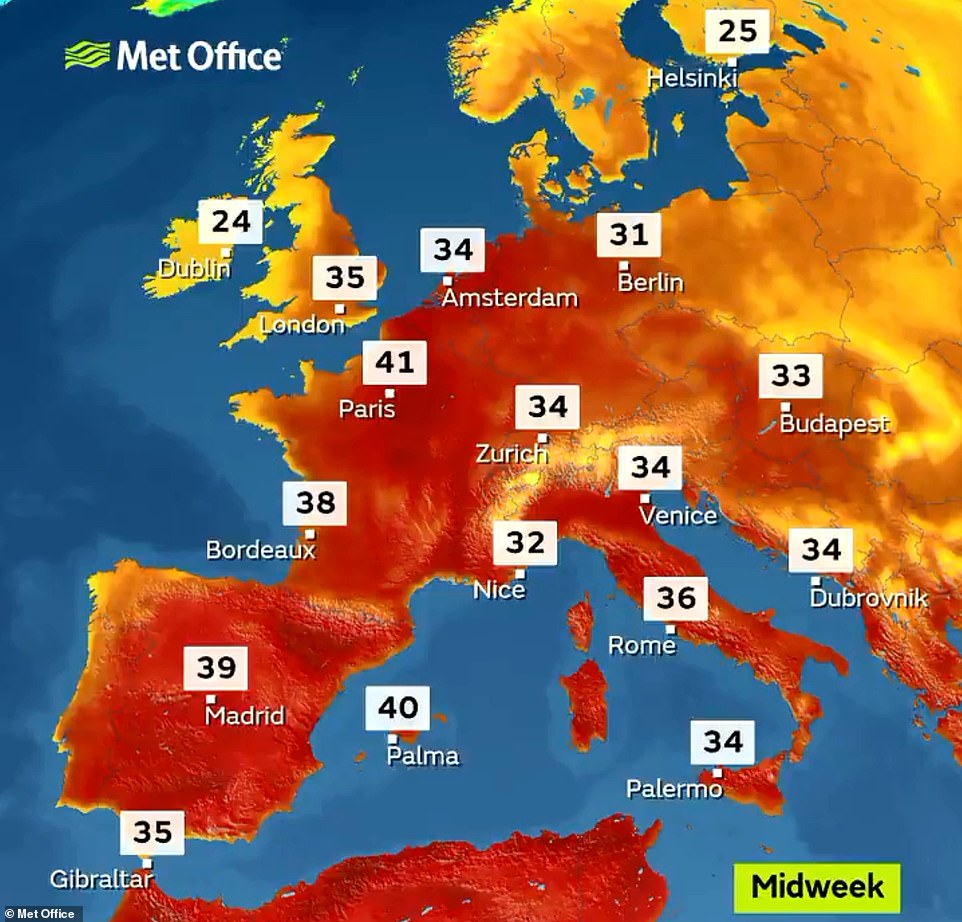 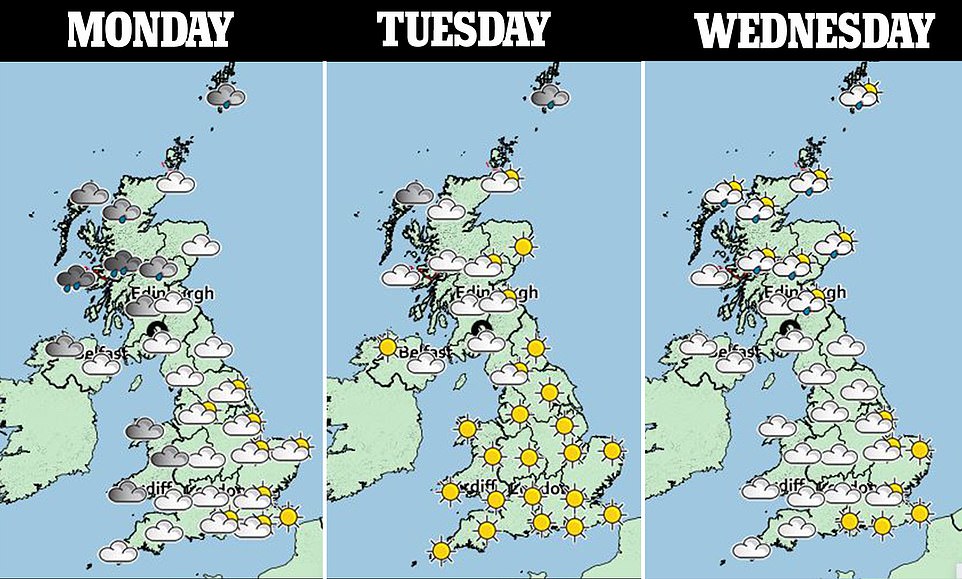 Met Office spokesman Emma Smith said: ‘On Thursday, there is a chance it could become even warmer. The current highest July temperature since records began in 1910 is 36.7C recorded at Heathrow on July 1, 2015.

‘There is a possibility the record could be broken – although we are forecasting a more widespread maximum temperature of 33C (91.4F) that day. It depends on how quickly thunderstorms move in, bringing cooler air.’

For most of the UK, the mercury needs to hit 77F (25C) for three consecutive days to become a heatwave. This threshold increases the further south east in the country, with temperatures in London needing to reach 81F (27C). 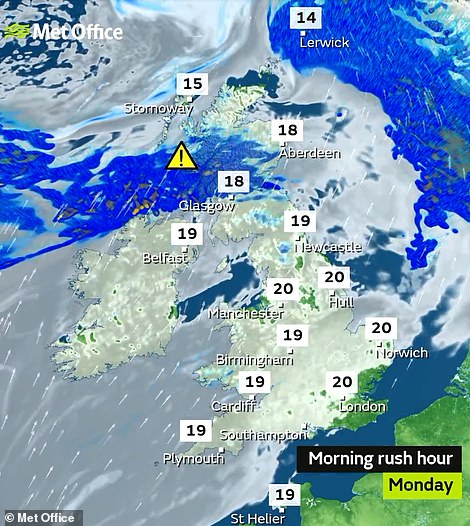 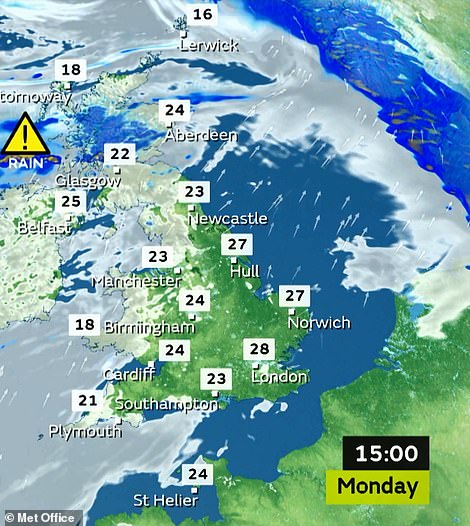 Warm sunshine is predicted for much of England and Wales from today, with the mercury hitting 84F (29C) in the South East 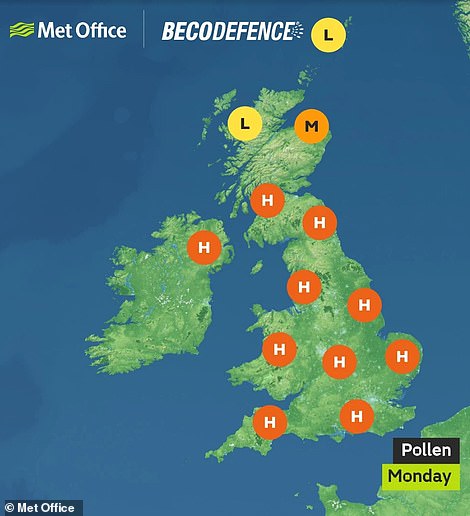 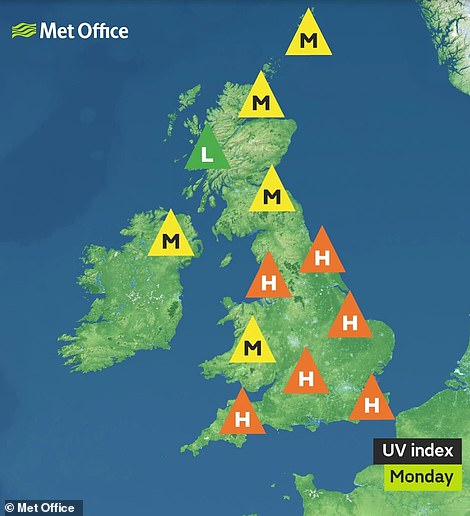 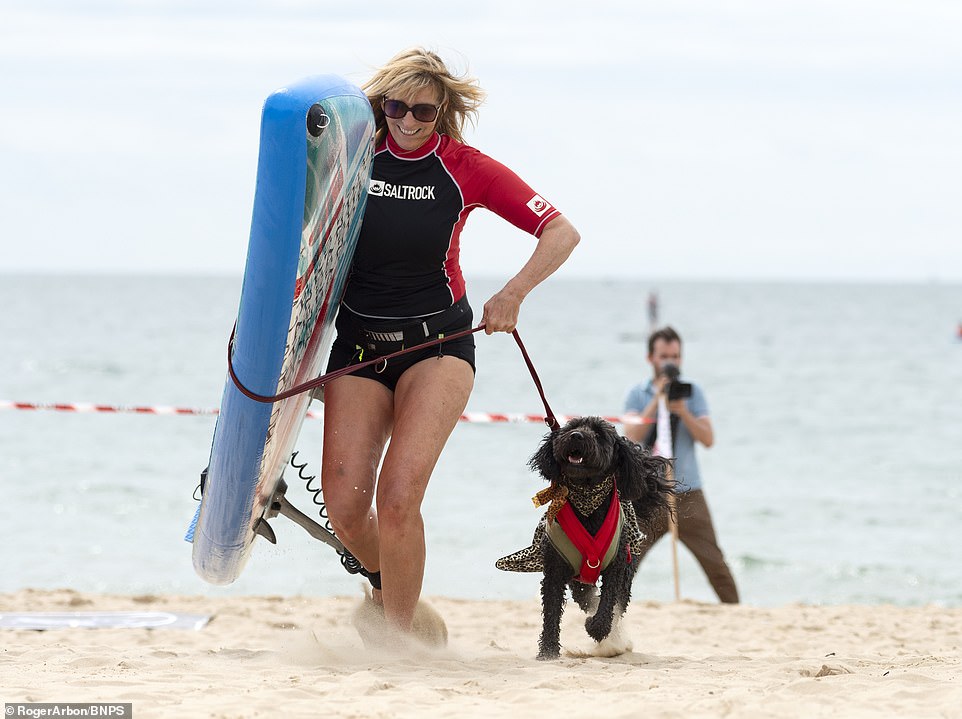 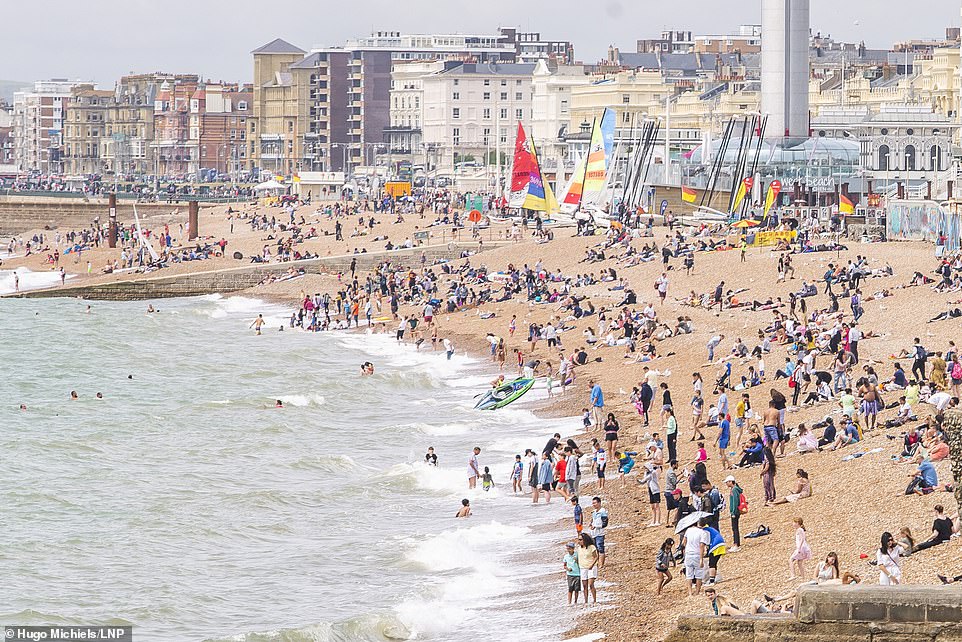 Amid tinder-dry conditions in central Portugal yesterday, more than 1,800 firemen – assisted by 13 aeroplanes, bulldozers and 20 soldiers – battled a wildfire after bringing under control two other blazes which left 20 people injured and caused a village to be partially evacuated.

Strong winds and highs up to 36C (97F) were making it harder to put out the remaining wildfire in the Castelo Branco area.

Meanwhile, hot conditions were also affecting much of the United States yesterday. US officials said around 95million people were under a heat warning yesterday – on Saturday the figure had been 157million.

At least six people have died in the sweltering heat which took temperatures above 37C (98F), including four in Maryland, one in Arizona and another in Arkansas.

New York was among the worst affected and mayor Bill de Blasio declared a heat emergency with a heat index – what the temperature feels like – of 46C (115F).

England’s chief nurse has urged people to check on their neighbours as a heatwave hits parts of the UK for the start of the school summer holidays.

Ruth May, chief nursing officer for England, said people should take care as temperatures rise, while Asthma UK urged sufferers to keep up their medication. People with minor illnesses are urged to check the NHS website or call 111 for help.

She said: ‘Like lots of people I’m looking forward to having fun in the sun with family and friends this weekend, but nobody wants to spend a pleasant day stuck in a hospital or urgent treatment centre.

‘It’s really important to take simple precautions like drinking plenty of water, using high-factor sunscreen and remembering to take allergy medication if you need it – as is making sure to check in on neighbours and loved ones who can suffer the most from heat and pollen.’

Dr Andy Whittamore, clinical lead at Asthma UK and a practising GP, said: ‘A toxic cocktail of hot humid weather and rising pollen levels this week could be extremely hazardous for the 5.4 million people in the UK with asthma, triggering deadly asthma attacks.

‘Hot air and hay fever can cause people’s airways to narrow, leaving them struggling to breathe, with symptoms like coughing, wheezing, a tight chest and breathlessness. Hot weather can also increase the amount of pollutants, pollen and mould in the air which can trigger asthma symptoms.

‘If you are worried about the weather or hay fever affecting your asthma, make sure you take your hay fever medicines, keep taking your regular preventer as prescribed by your doctor and carry your blue reliever inhaler at all times.

‘We’d advise you to drink lots of water to prevent dehydration and plan any outdoor activities for earlier in the day when the air quality tends to be better.’

Public Health England warns that the main risks posed by a heatwave are:

It says those most at risk are:

The Met Office has raised a Level 2 heatwave alert for this week. Public Health England advises people to stay tuned to the weather forecast, check the forecast at their destination if travelling, and keep cool at home. Tips for coping include: