UK weather: Balmy Britain will be hotter than Athens, Madrid and Rome this weekend

Almost a year ago, Britain was gripped by the Beast from the East – with Arctic scenes and major snowfall, leaving areas cut off for up to a week and huge drifts which almost buried houses.

But a flow of warm air originating from north Africa is likely to send temperatures for this February close to the all-time record this weekend.

Temperatures which are currently around 12C (54F) 13C (55F) in many areas could reach 15C (59F), around double the average for the time of year, from tomorrow onwards.

Pictured: Florence O’Sullivan, three, plays in the middle of daffodils as Green Park, central London, as the country looks forward to temperatures hotter than Athens, Madrid and Rome heading into this weekend 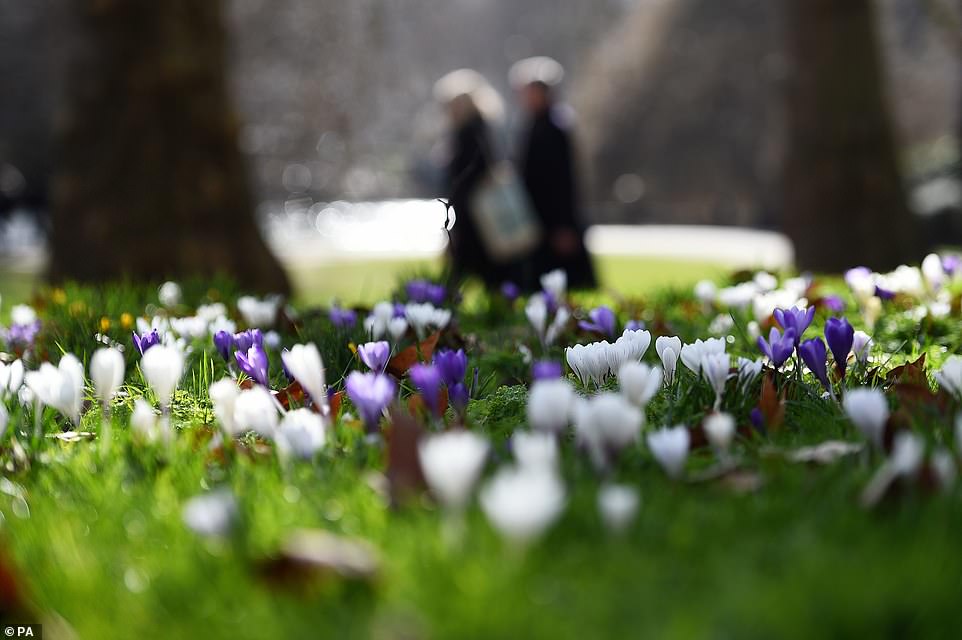 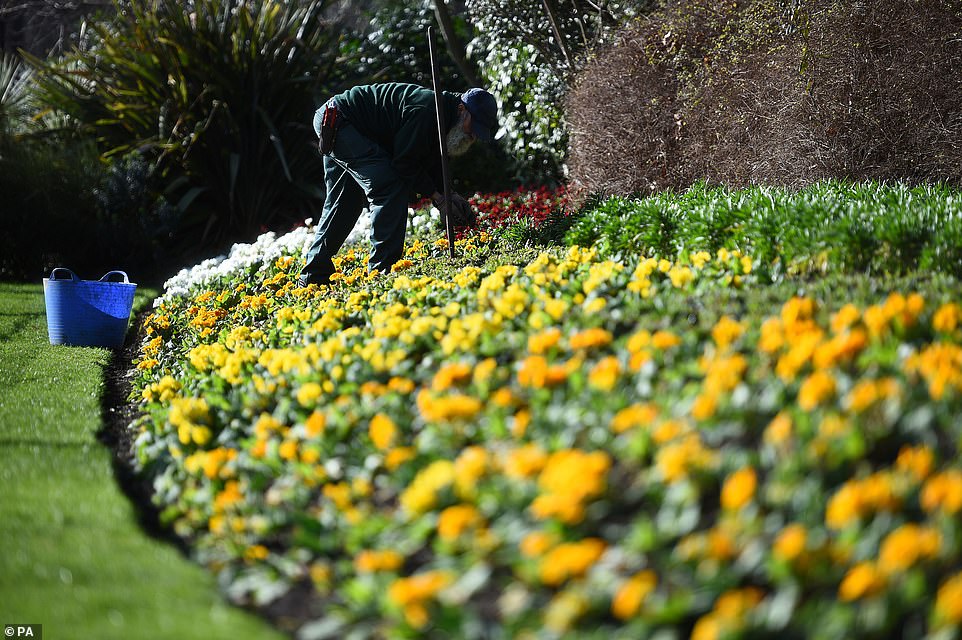 A gardener tends to flowers in St James’s Park, central London, as Britain braves itself for a balmy weekend set to be hotter than Athens, Madrid and Rome As the weather heats up across the UK over the next few days, people are pictured in Brighton, East Sussex, enjoying the sunshine on the beach 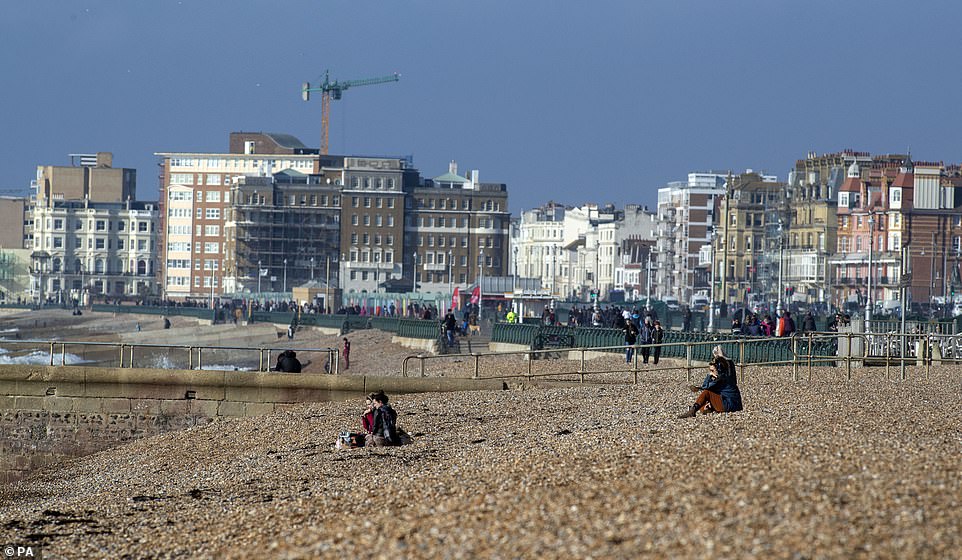 Seaside sunshine in Brighton, East Sussex, today offered a sign of days to come as Britain is set for a balmy weekend with temperatures higher than Athens 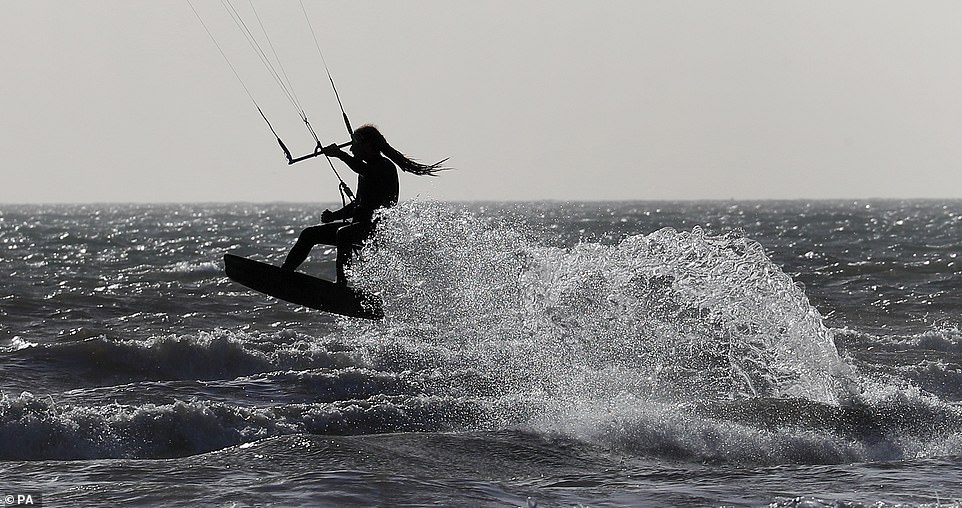 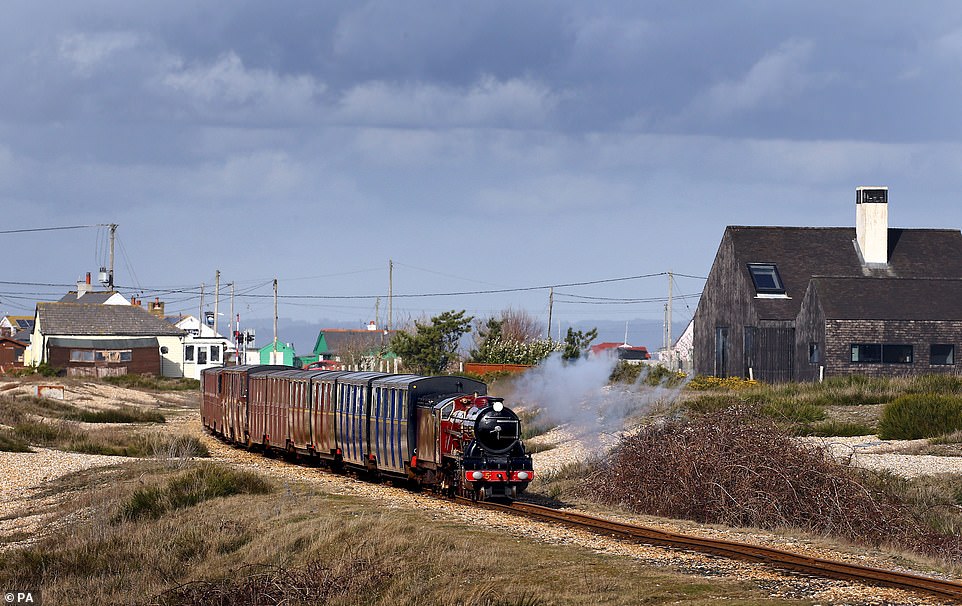 A steam train from the Romney, Hythe & Dymchurch Railway passes through Dungeness in Kent yesterday 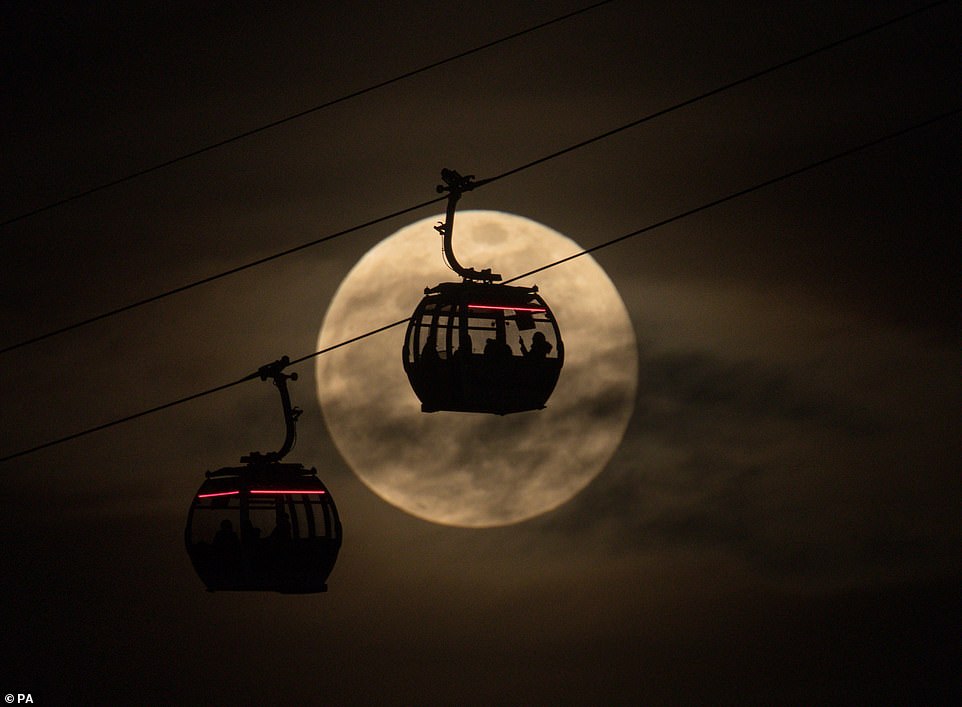 Cable cars are silhouetted against the backdrop of a ‘Super Snow Moon’ last night in Greenwich, South East London

Across many parts of the UK, spring flowers are already in bloom, while trees are beginning to bud.

After temperatures which reached 18.2C (64.7F) in North Wales last Friday – the warmest of the year so far – similar figures are predicted for the coming weekend. By Saturday, most of the country could be bathed in sunshine.

Met Office meterologist Becky Mitchell said: ‘There is a good chance the weather will get warmer towards the weekend, with some very mild temperatures, because we have winds coming from the south.

The 2018 Beast from the East by numbers

‘At the moment, it looks as though we could have similar maximum temperatures to last weekend.

‘The warmest temperature last Friday was at Colwyn Bay, North Wales, and it looks as though similar places could again be warmest, on the lee side of hills and mountains.

‘Places where it could be warmest again include parts of north Wales, and the North East, as well as central and southern England.’

She added: ‘There is a small chance we could come close to the record but are unlikely to break it.’

Miss Mitchell said the mild and settled conditions could last for the rest of the month, in much of England and Wales. ‘High pressure is likely to be around until the end of February, at least,’ she said.

‘But into March, areas of low pressure and weather fronts could start to make inroads and we could also see some easterly winds, making it cooler.’

However, the Met Office said it is not predicting a repeat of the Beast from the East this year. And, in good news for gardeners whose plants have started blooming early, the chance of frosts is also low. 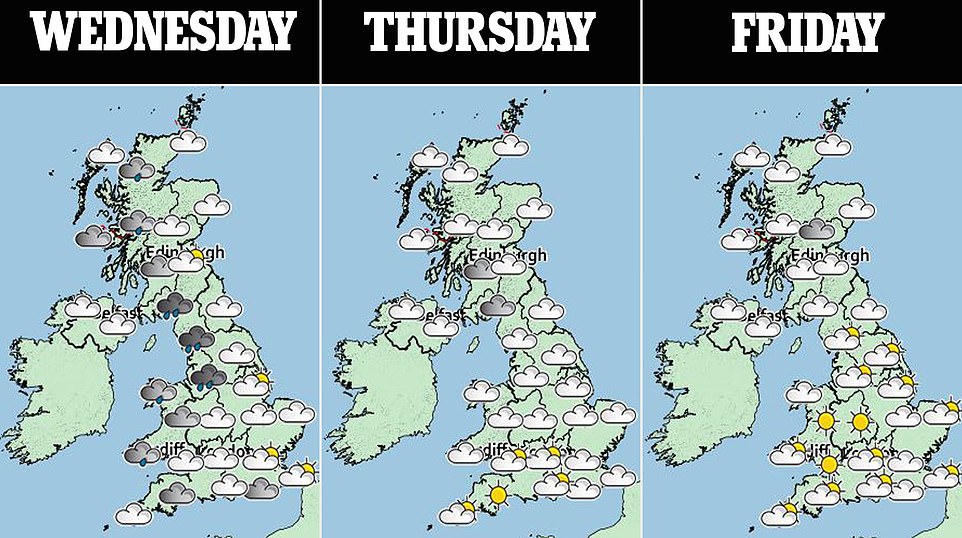 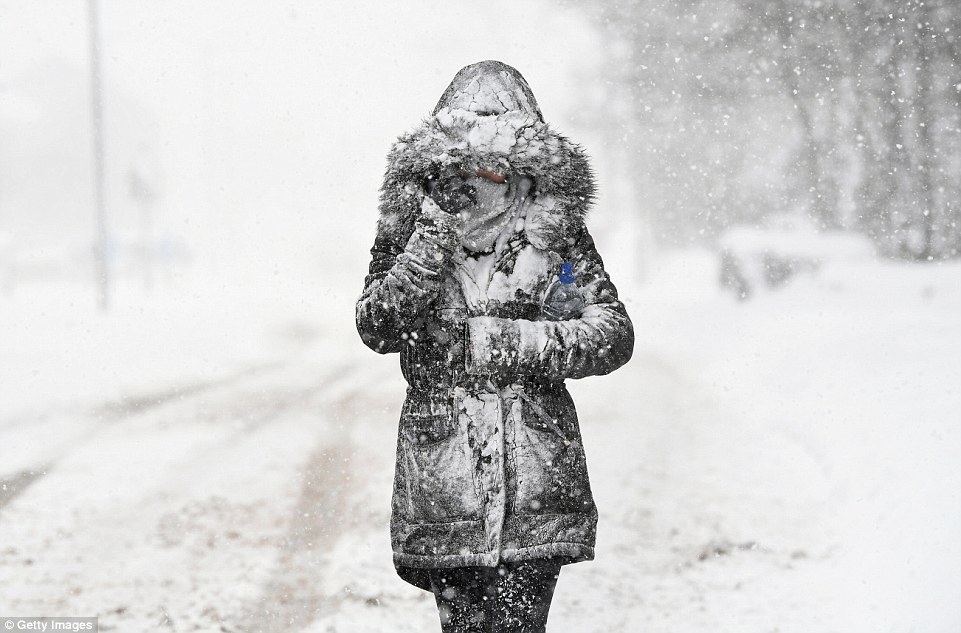 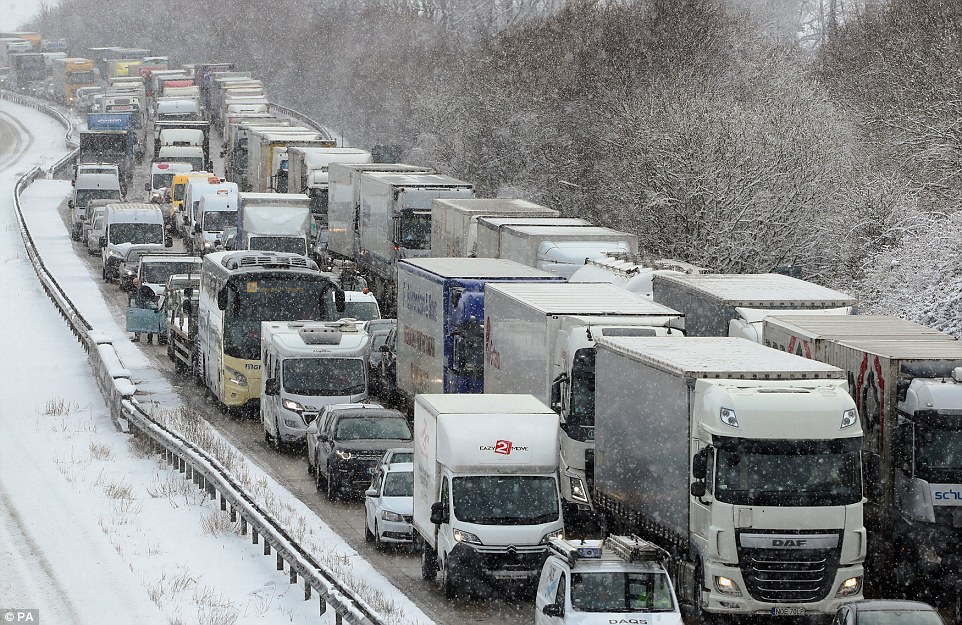 Traffic on the M20 near Ashford, Kent, after heavy overnight snowfall on February 27 last year during the Beast from the East 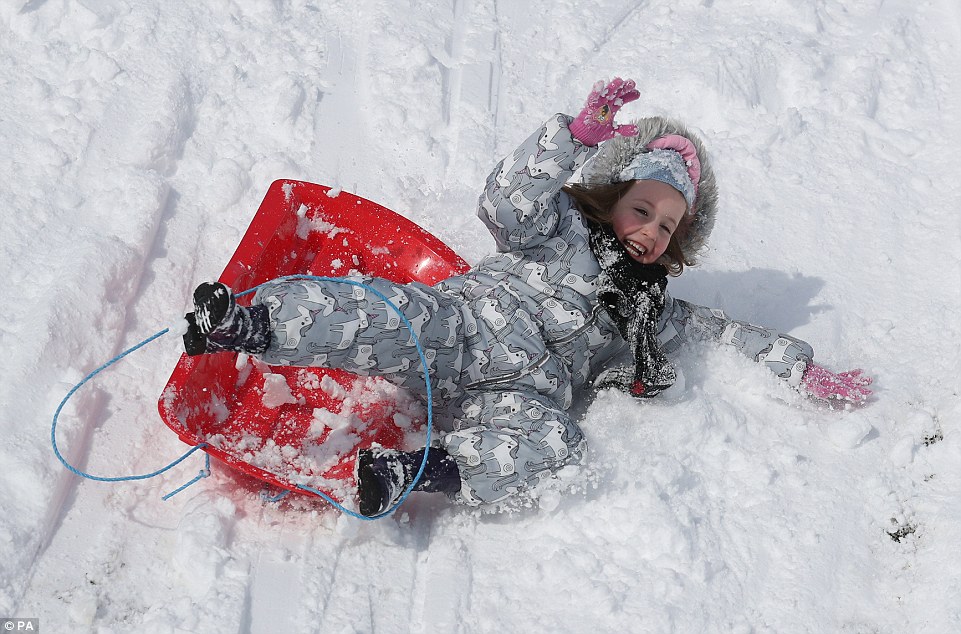 Poppy Burchill, four, falls off a sledge while playing in Larbert, near Falkirk on March 1 last year during the Beast from the East

Miss Mitchell added: ‘Over the next week or so, the chance of frost is very limited although there is an increased risk into March.’

Today: It will be a cloudy day for most with rain affecting much of Scotland, Northern Ireland and north-west England. Wales and southern England will be mostly dry with one or two bright spells possible, most of which will be in the morning. Moderate south-westerly winds. Temperatures above average.

Tonight: During the evening, it will be dry with clear spells across much of England. However, in Scotland, Northern Ireland, Wales and north-west England, it will be mostly cloudy with outbreaks of light rain or drizzle. A few mist or fog patches may develop later in the south. Moderate southerly winds.

Tomorrow: There will be sunny spells for many parts of England and Wales but it will be cloudy with patchy rain in Scotland and Northern Ireland, especially in the morning.

Friday: It will be sunny for most, although there will be cloud and patchy rain in Scotland and Northern Ireland, mostly later.

Saturday: It will be mostly dry and sunny with a few early fog patches. Cloud and rain is possible in the far west during the afternoon.

The UK’s highest temperatures this weekend are again set to be at least on a par with southern European cities such as Madrid and Rome, which are due to be 17C (63F).

It should be much warmer than in the eastern Mediterranean, where a rainy Athens is due to be 8C (46F) on Saturday.

But before the weekend, some rain is in store during today. Showers are due in the north and west today, although settled weather is set to continue elsewhere.

During tomorrow and Friday, it is set to be cloudier in the north and west, but sunshine is expected for most of the country on Saturday.

Into next week, the Met Office predicts a North West / South East split, with the best of the mild and sunny weather in the south and east.

In its long-term outlook, it adds: ‘Into early March there are signals for Atlantic fronts to cross the whole of the UK, bringing a mixture of wet and windy weather to many parts, but also intermittent drier spells.

‘Snow remains possible over higher ground in the north. There are weaker signals for snow to lower levels elsewhere should a cold easterly develop; this remains a small possibility. However, milder conditions remain more likely, with occasional overnight frosts.’