We’re all dreaming of a white Christmas – but Christmas Day will be decidedly grey, not to mention wet.

Forecasters warned that most of us can expect to wake up to dull, drizzly skies on Christmas morning, with only those in the North of Scotland having a chance of seeing any snow.

For the rest of Britain it will be overcast and windy, with mild temperatures of around 10C (50F) . 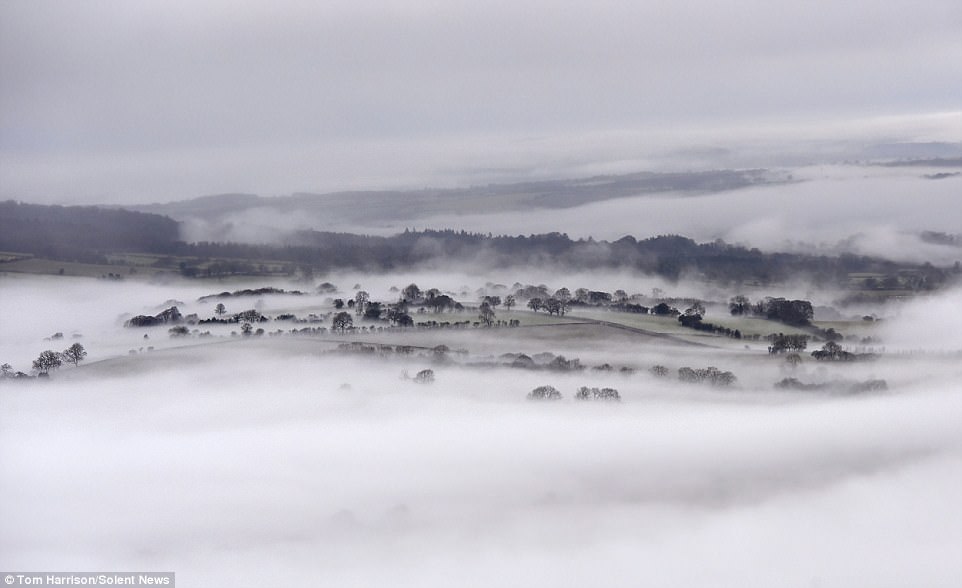 A dramatic sunrise from Clee Hill in Shropshire today as the mist rises, with fog still seen over the fields this morning 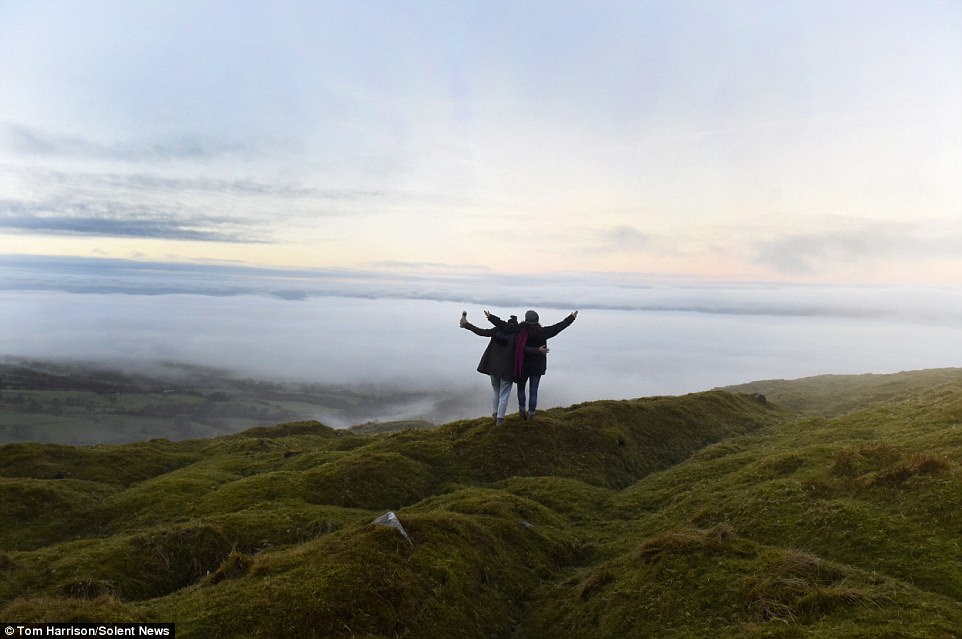 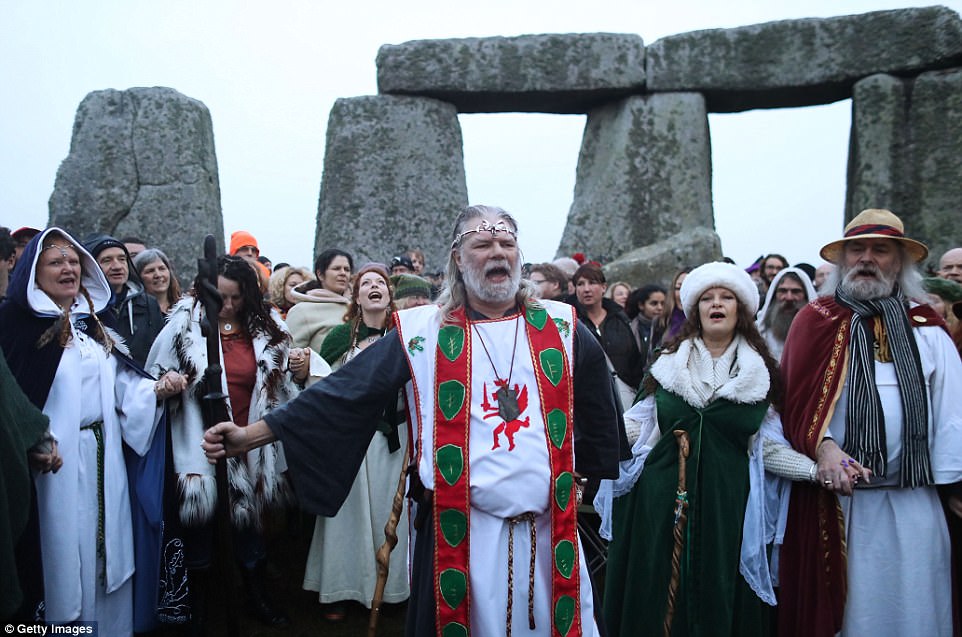 Druids, pagans and revellers gather in the centre of Stonehenge in Wiltshire this morning as the sun rises 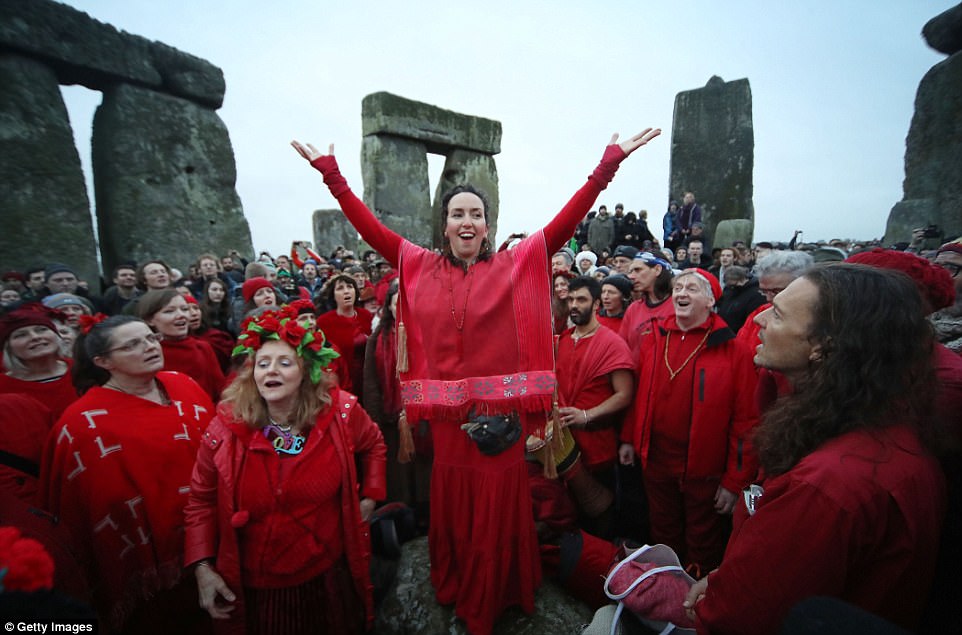 Despite a forecast for cloud and rain, a large crowd gathered to celebrate the sunrise closest to the winter solstice 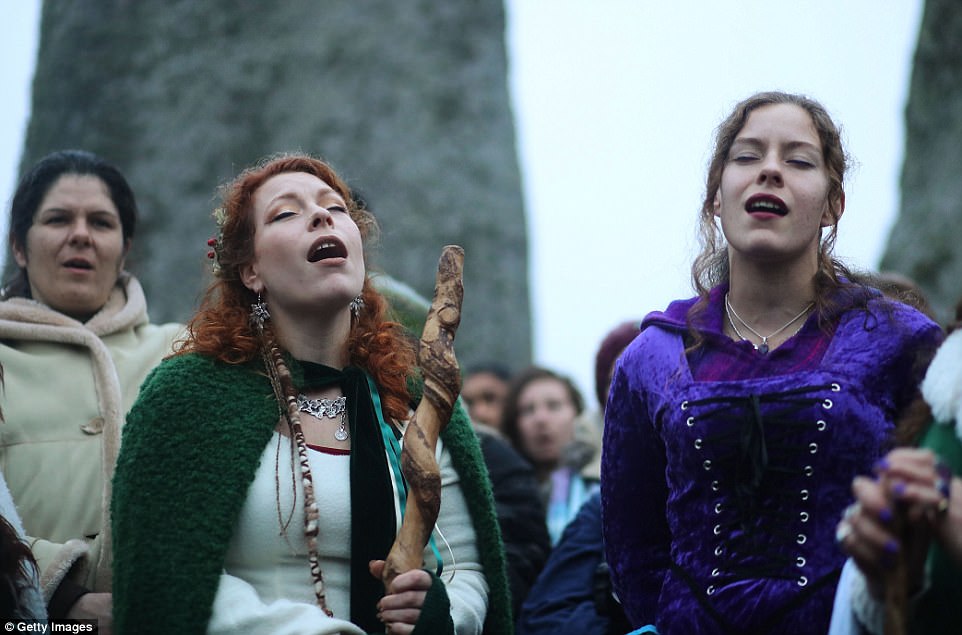 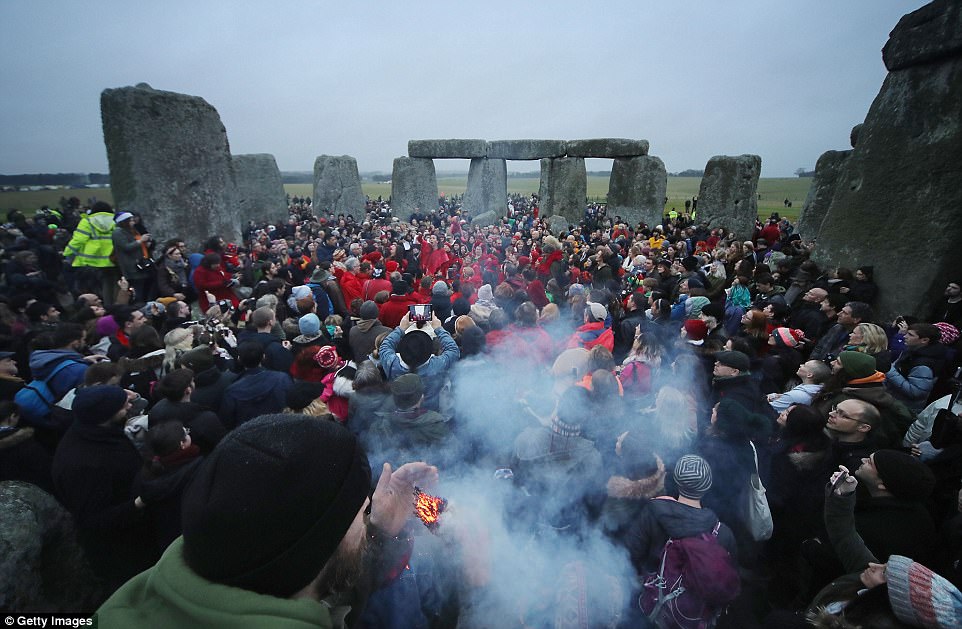 Druids, pagans and revellers gather in the centre of Stonehenge for the sunrise today, one day after the winter solstice

Christmas Day will be followed by strong winds, which could see the latest storm – set to be named Storm Dylan – hitting by the end of the year.

Weather warnings are in place for strong winds and heavy rain on Christmas Eve and Christmas Day in northern Scotland. If temperatures fall low enough some snow could fall.

But Met Office spokesman Grahame Madge said that for most Christmas would be a mild day, with grey, wet and breezy conditions. ‘It is going to be rather overcast and windy with rain in quite a few places,’ he said.

‘So there is a band of heavy rain working its way across Northern Ireland and Scotland. There is a chance that we could see a white Christmas but it is only a fairly low probability …More likely rain.

‘It is going to be breezy and windy for most and in some locations there will be the chance of stronger winds – perhaps even gales.’

Temperatures could reach 12C (54F) in London on Christmas Day and double figures are expected across the country – well above the December average of 7C (44F). 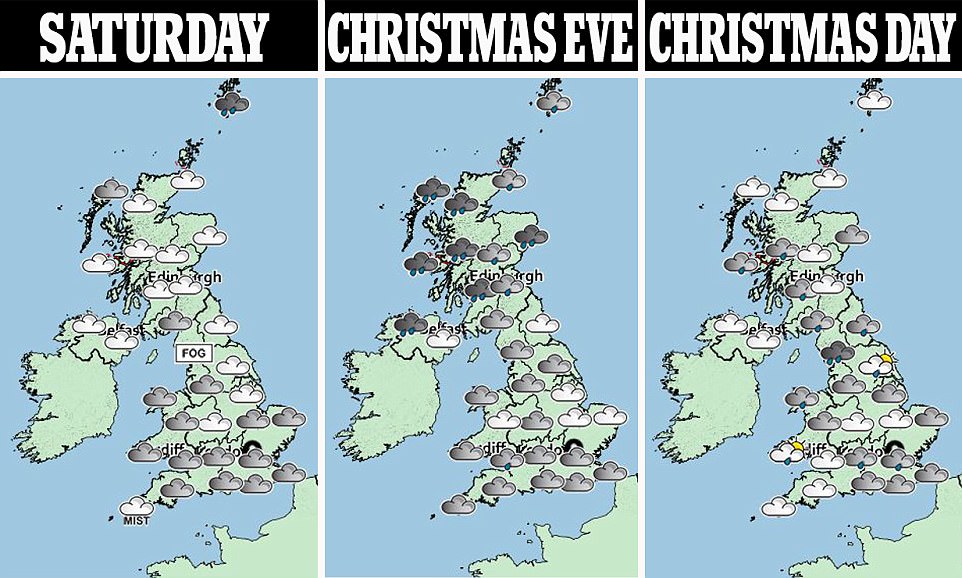 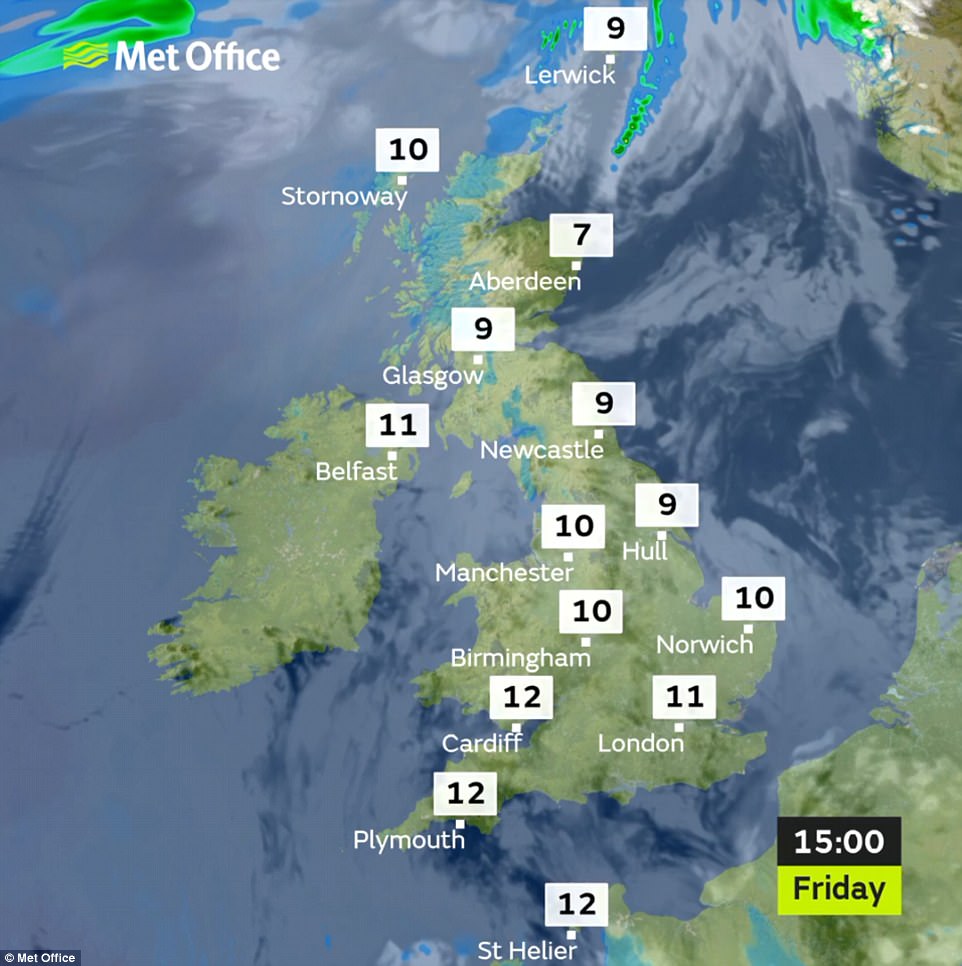 Mr Madge said there would be a period of ‘unsettled’ windy weather between Christmas and New Year’s Day but it was too early to say if it could be a named storm.

Motorists have been warned that major routes across the UK are due to experience some of the busiest delays today – nicknamed ‘Frantic Friday’ – as people begin the Christmas getaway.

The RAC predicts there will be 12million vehicles on the road, with traffic expected to peak between 4pm and 8pm.

Traffic jams will be made worse after planned rail strikes, which have now been cancelled, led travellers to make alternative plans and travel by road instead.

Airports, ports and international train stations will also be exceptionally busy with more than 4.5million people heading abroad over Christmas and the new year. 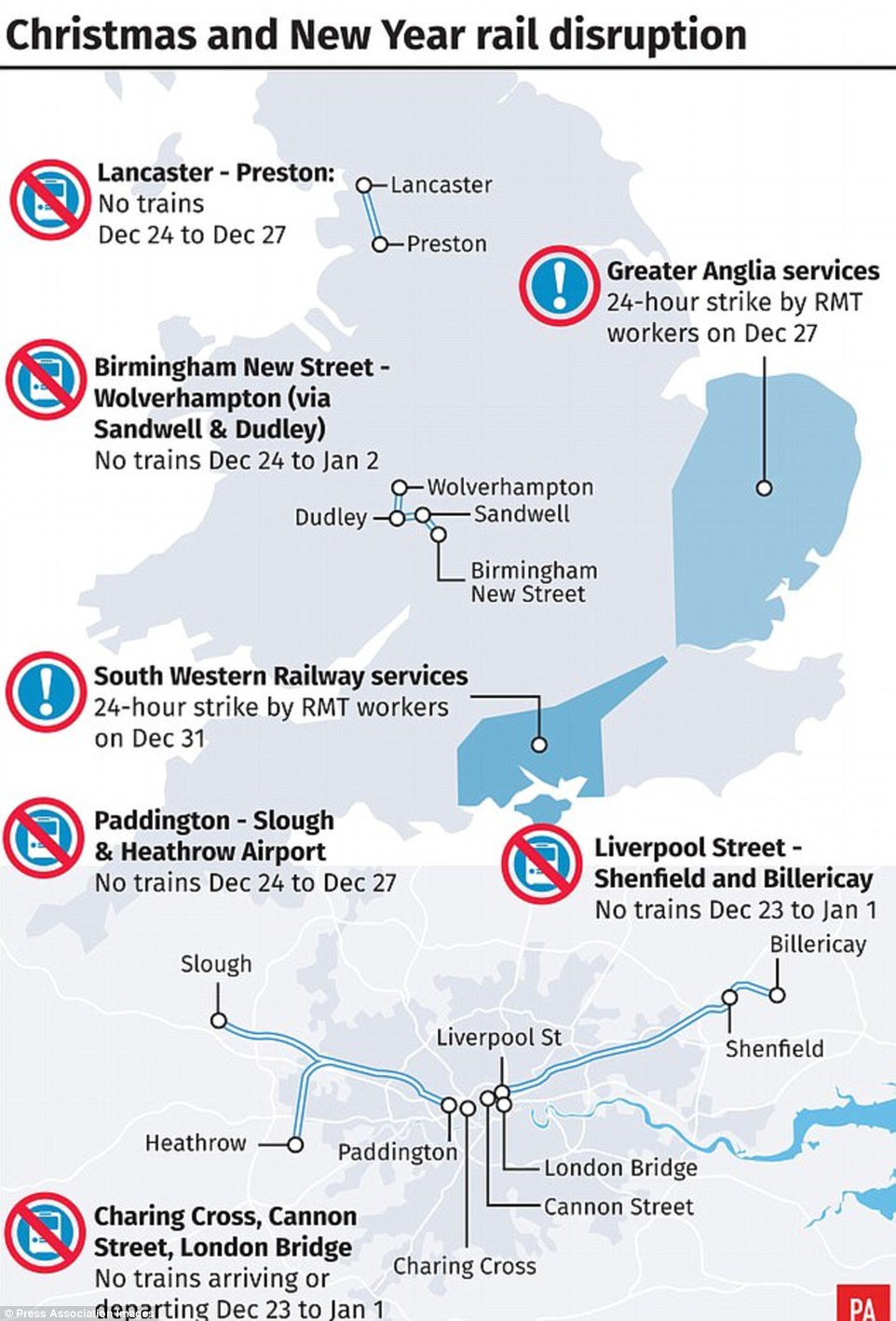 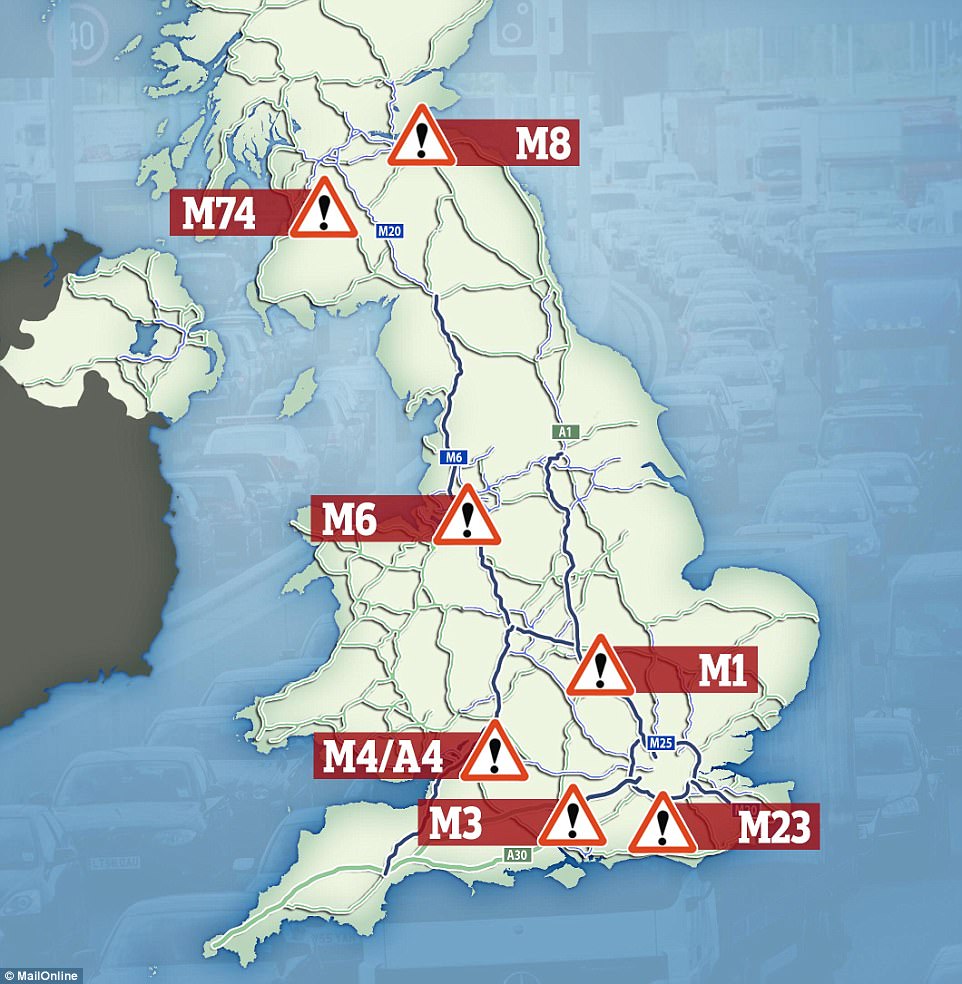 Tomorrow 14million people are expected to hit the shops on what is set to be the busiest day of the year for supermarkets.

Analysts are predicting spending of £1.6billion in high streets and online – £1.2million a minute – on what is dubbed ‘Super Saturday’.

Most people will be buying their turkey, trimmings and other fresh food tomorrow rather than on Christmas Eve, when opening hours will be shorter because of Sunday trading restrictions.

Major stores have slashed prices by upwards of 50 per cent in the hope of fuelling the spending binge, and the Centre for Retail Research predicts that £1.4billion will be spent on the high street – up 49 per cent on December 23 last year.

Meanwhile 3.4million shoppers are expected to go online to snap up bargain gifts and big-ticket items, spending another £220million.