Britain woke up to sub-zero conditions today after the coldest night of the winter so far saw temperatures plummet beyond -14C (7F) – ahead of further heavy snowfall on the way tonight.

Up to 4in (10cm) of snow could fall in six to nine hours over parts of Wales and South West England tonight into tomorrow, while snowfalls of up to 1in (3cm) are possible across the rest of England.

Braemar in Aberdeenshire was the UK’s coldest spot overnight where temperatures fell to -14.3C (6.3F) – well below the previous record for this winter of -10.8C (12.6F) set in the same village on January 18.

Dozens of schools were closed across Britain today due to the severe weather, with at least 20 reported as being shut in the Scottish Highlands, five in Merseyside, three in Northern Ireland and three in North Wales. 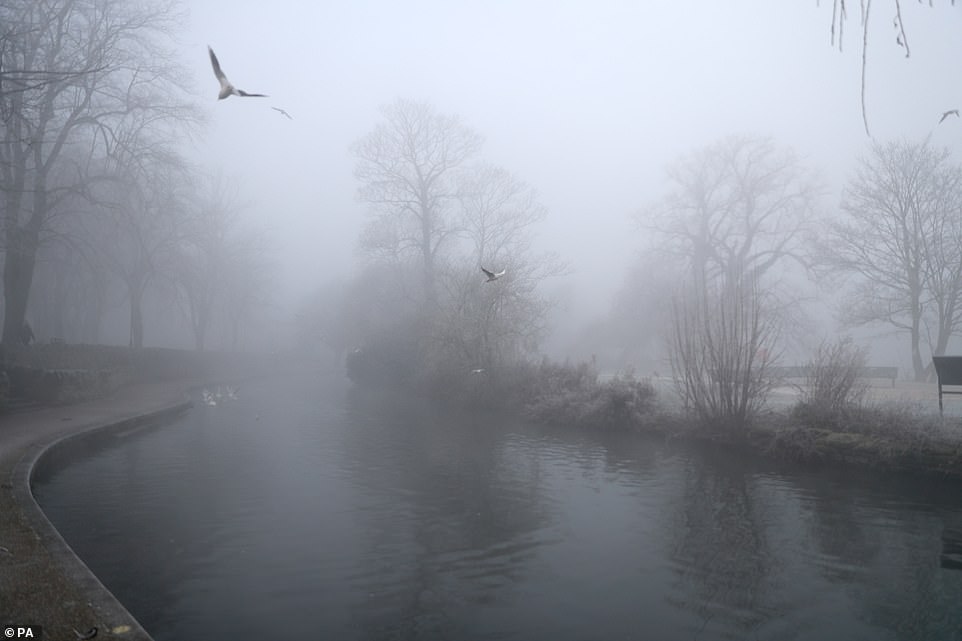 Freezing fog over the River Thames in Windsor, Berkshire, this morning as the cold snap continues to cause icy conditions 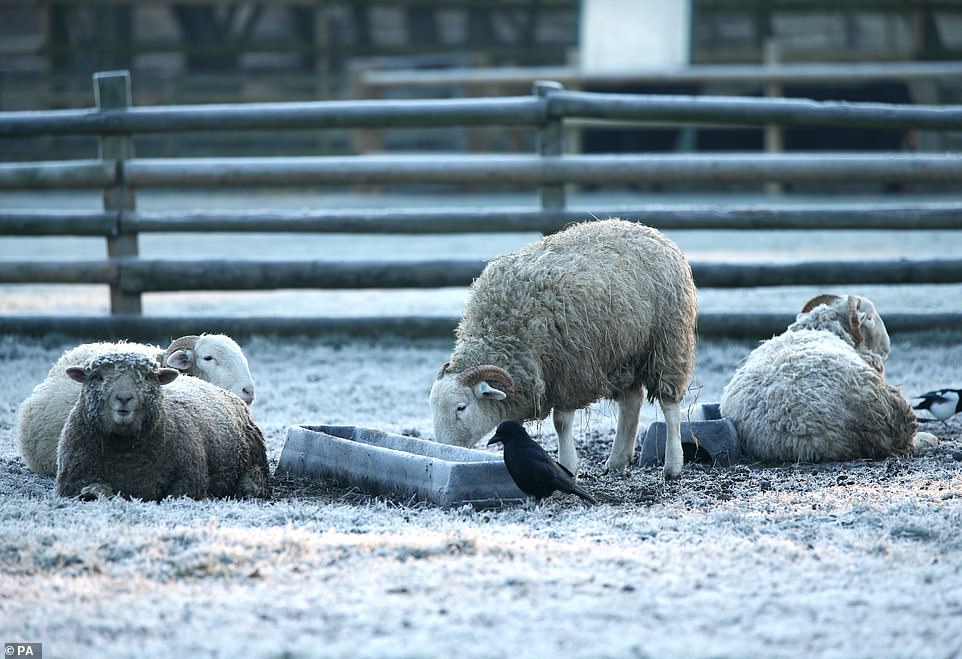 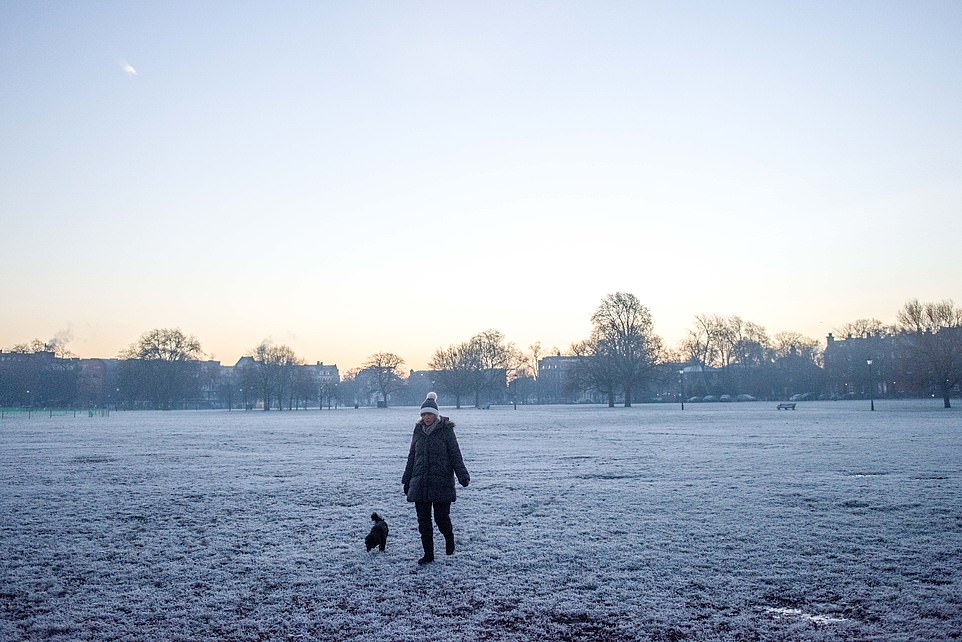 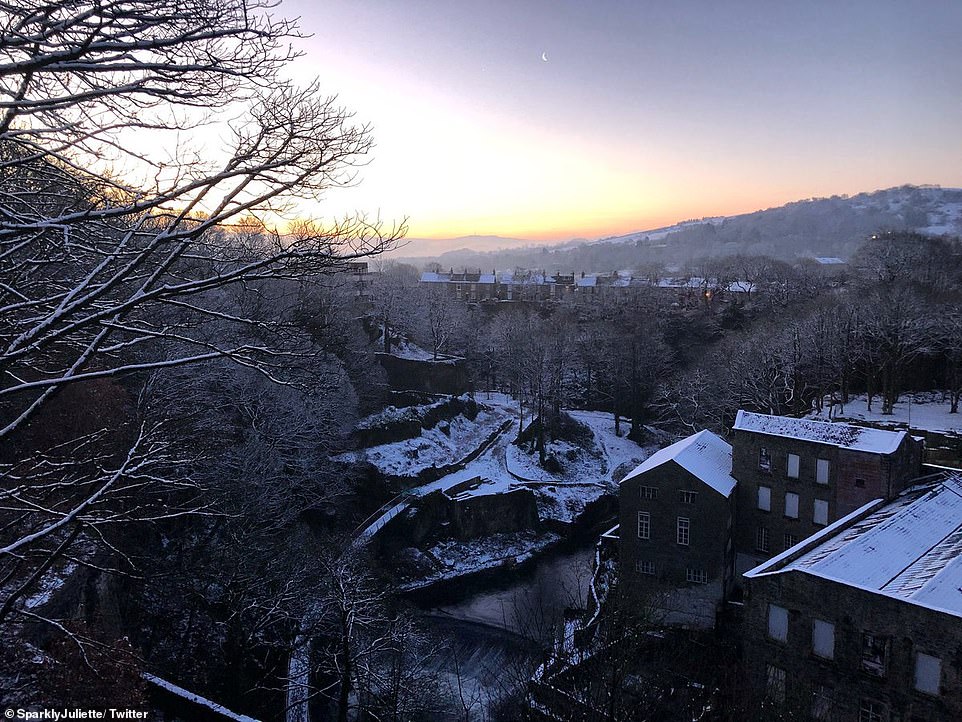 Snow over the rooftops of New Mills in Derbyshire this morning, close to the Cheshire border and the Peak District 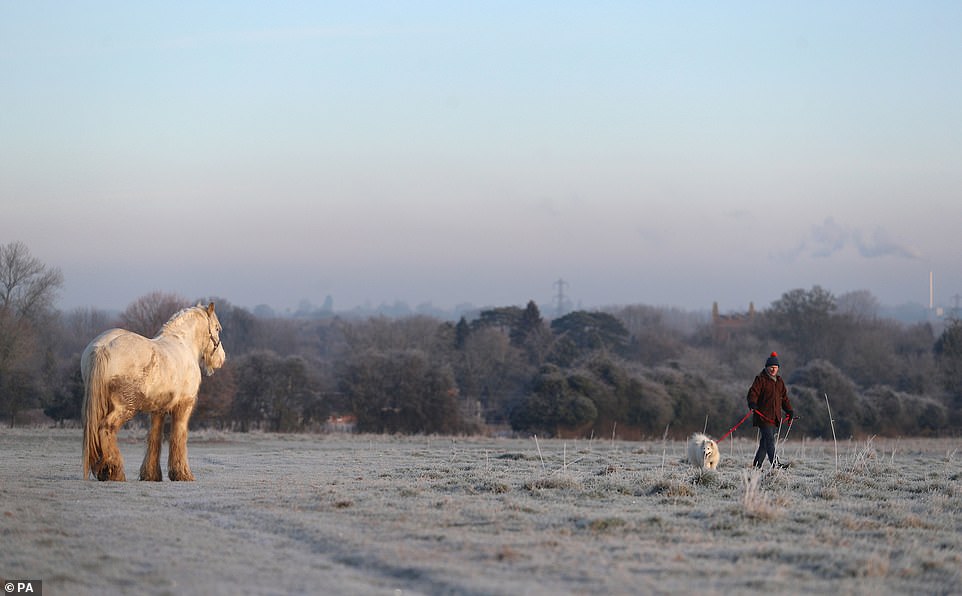 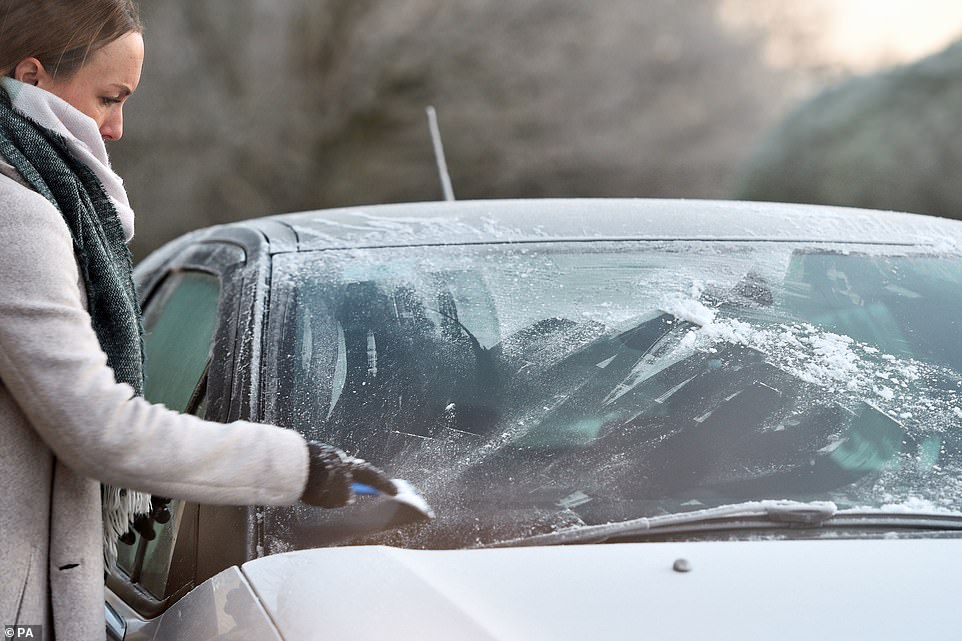 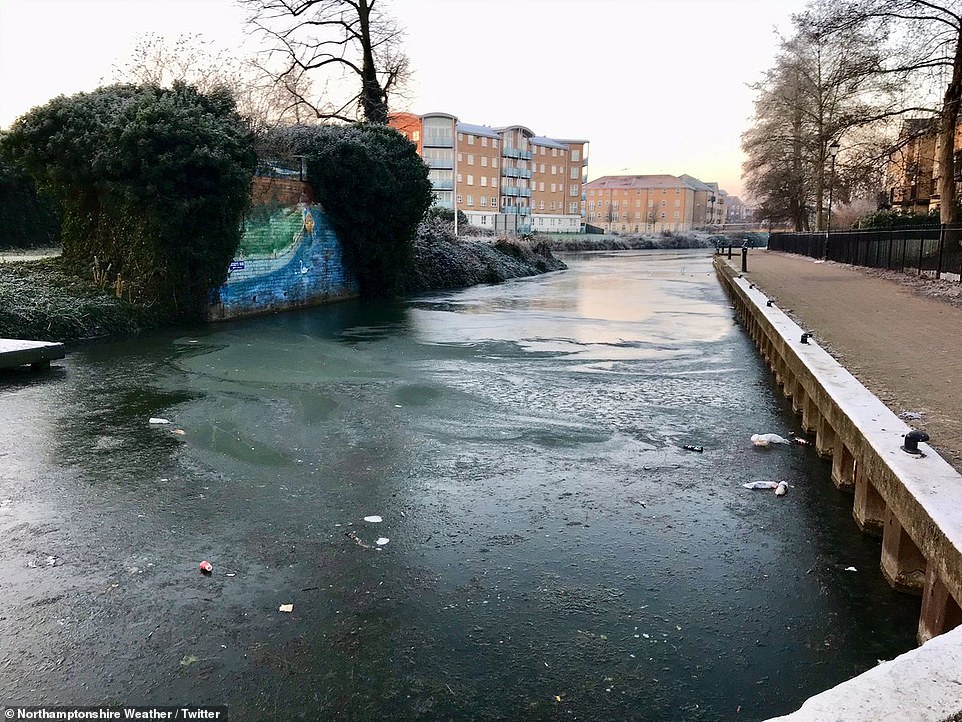 All four UK countries set new records for this winter overnight with Sennybridge in Wales down to -9.3C (15.3F), Magilligan in Northern Ireland falling to -8.5C (16.7F) and Redesdale Camp in Northumberland at -10.5C (13.1F).

He said: ‘It’s been a very, very cold night. Tonight we could see similar temperatures in Scotland, but Northern Ireland, England and Wales probably won’t be quite as cold. Saturday night into Sunday could also be very cold.’

Southeastern Trains said 21 services were being cancelled or altered this morning to minimise the impact of ice forming on the rails and ensure lines were clear and that it would run its ‘winter weather timetable’ tomorrow. 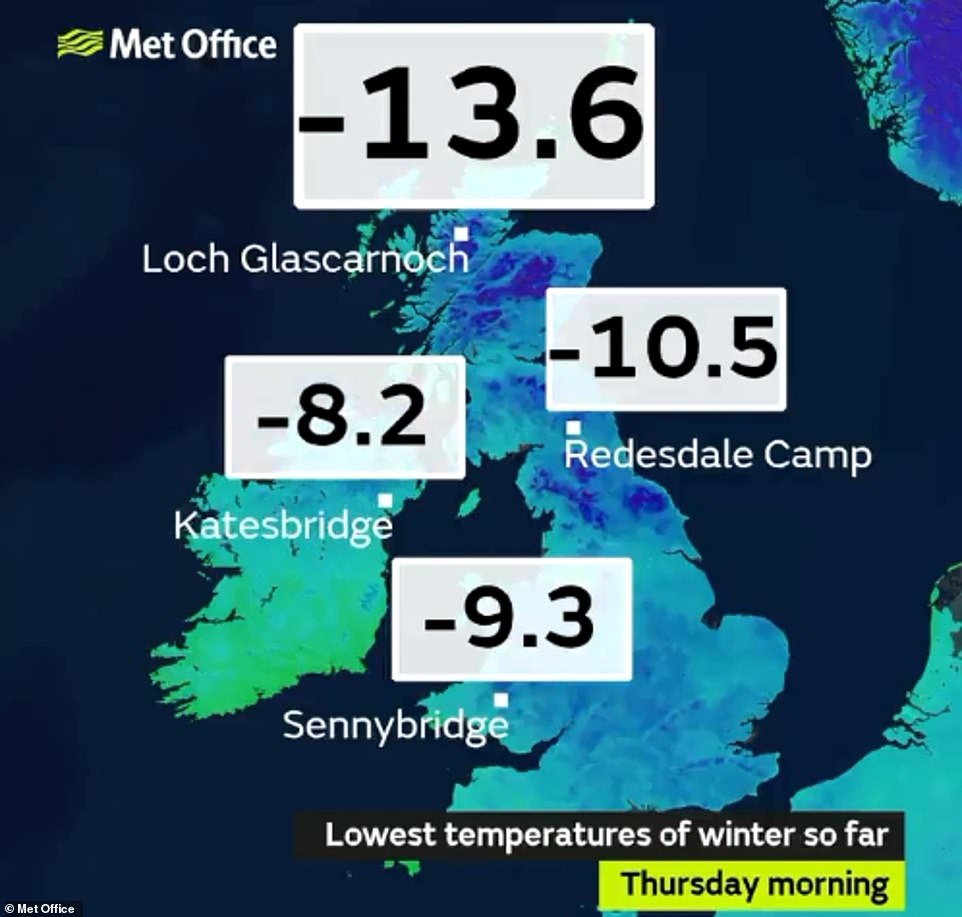 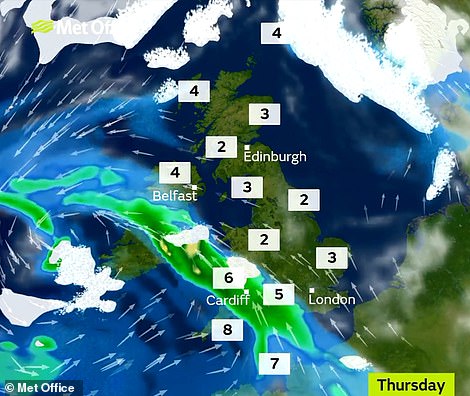 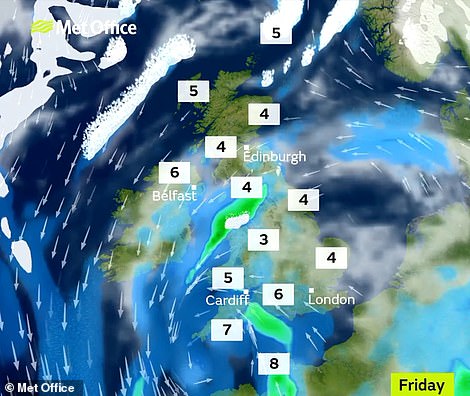 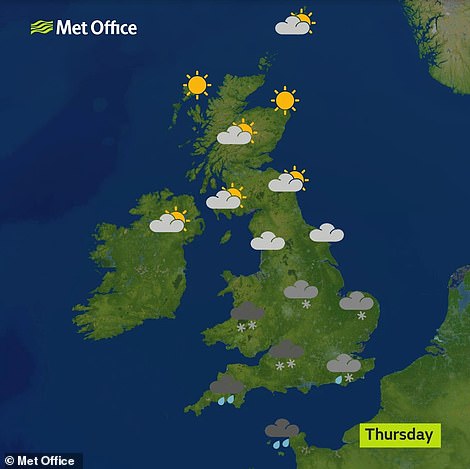 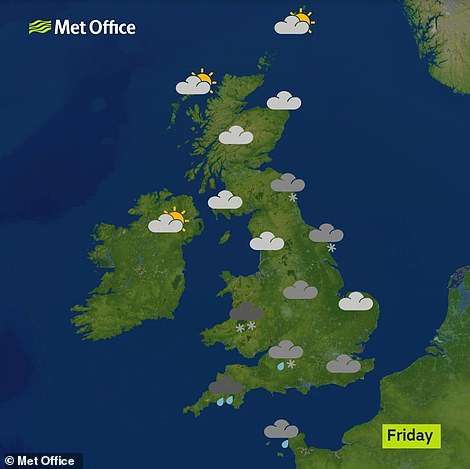 Snow will fall again in many parts of England today (left) and tomorrow (right), although Scotland is expecting some sunshine

Where and when are the Met Office warnings? 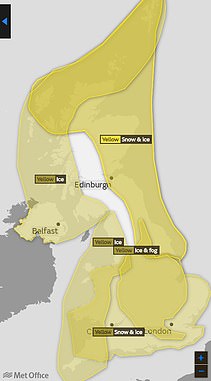 Ice: 5pm yesterday until 11am today

Ice: 6pm yesterday until 10am today

Ice and fog: 10pm yesterday until 11am today

Richard Leonard, Highways England Head of Road Safety said: ‘Gritters will be out treating our roads around the clock, but it is still important to drive to the conditions when snow is forecast.

‘Keep your distance and reduce your speed, because even in conditions that seem normal, and where the snow is not settling, it can be slippery if ice patches have formed, or where fresh grit has not been worked into the carriageway.

‘Drivers should plan their journeys, monitor weather reports and pack a snow kit of blankets, food, water and a shovel.’

Manchester and Liverpool airports were brought to a standstill yesterday morning, and hundreds of schools closed across the UK – including more than 200 in Greater Manchester – due to the harsh conditions.

Mr Wilson said central England and Wales could bear the brunt of the snow this afternoon and into the evening as wet weather coming through the South West turns wintry, with some places seeing up to 4in (10cm) of snow.

The Arctic grip on the weather has already caused chaos for thousands. Airport runways at Liverpool and Manchester were blocked yesterday, and roads and railways brought to a standstill. The snow also shut 400 schools across northern England and North Wales. 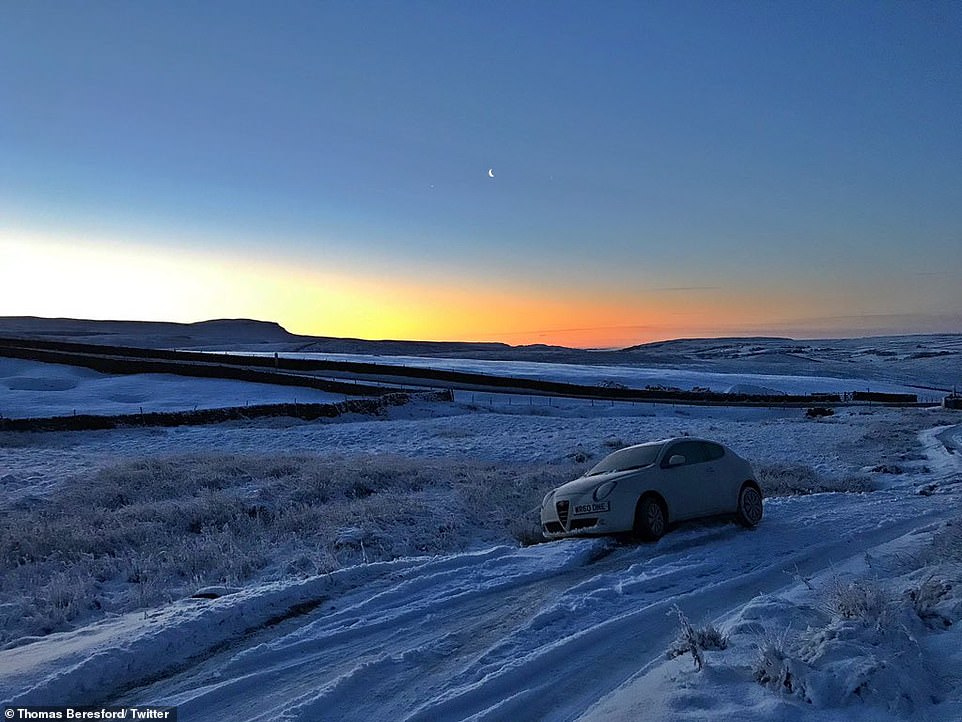 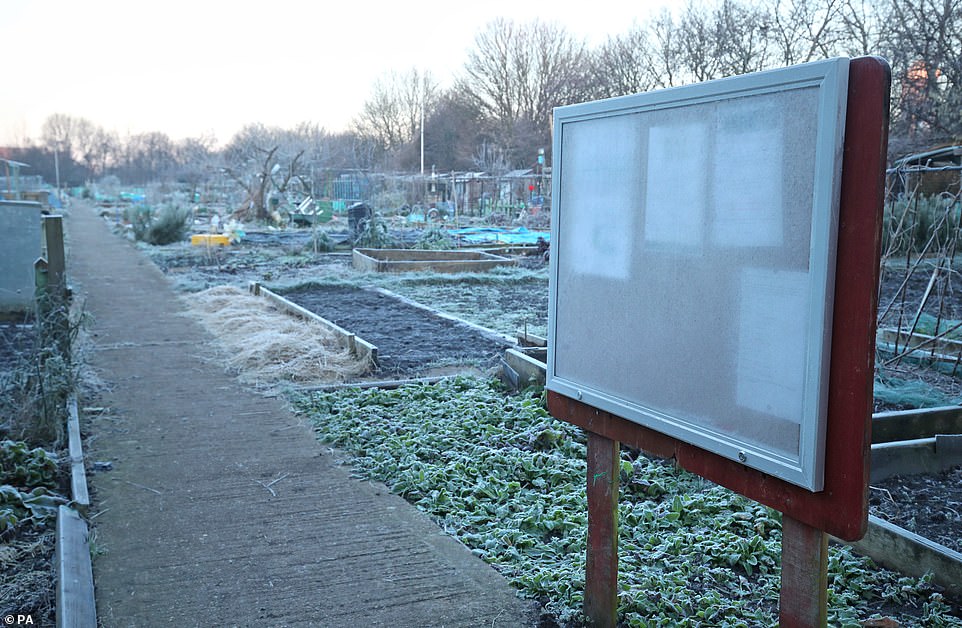 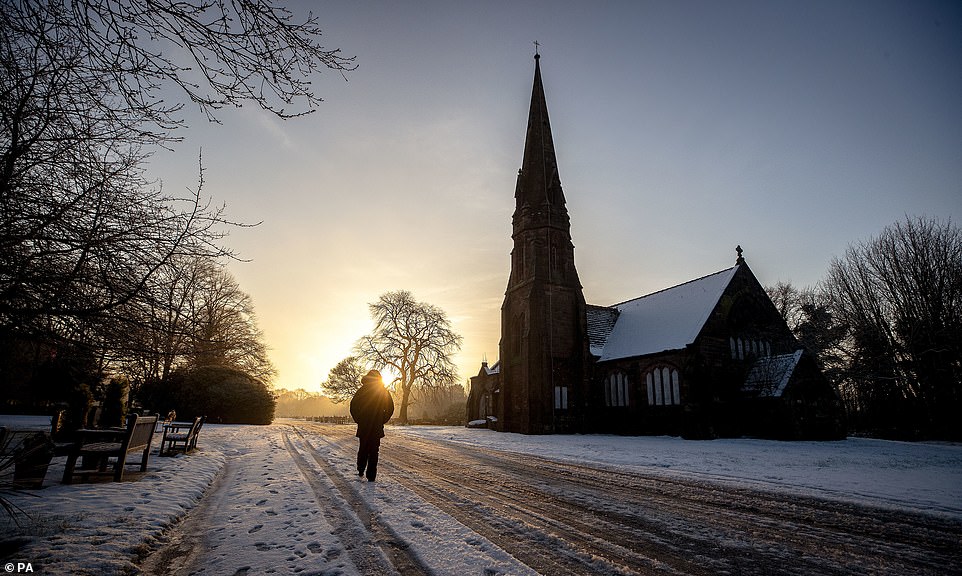 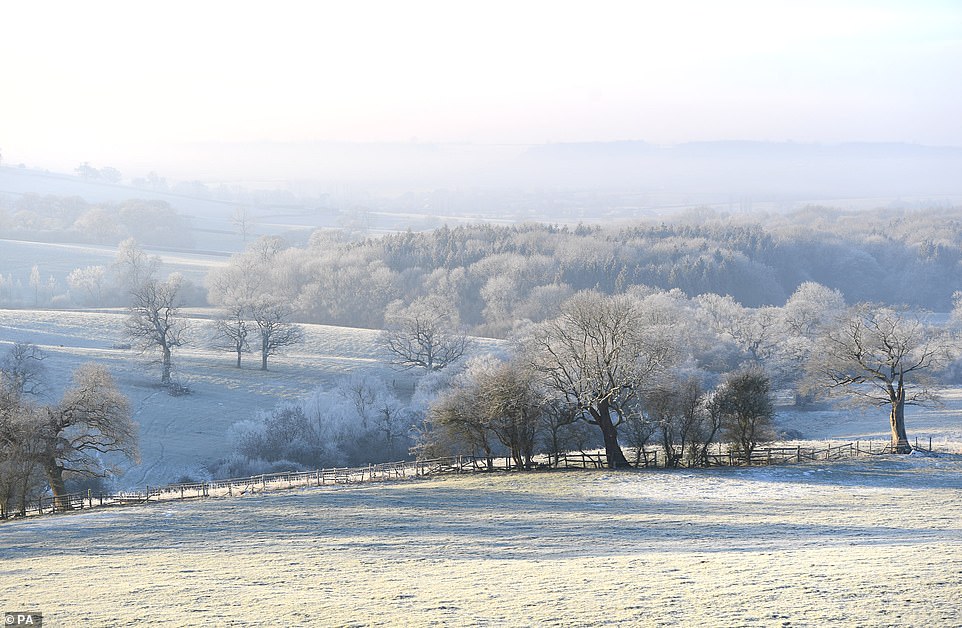 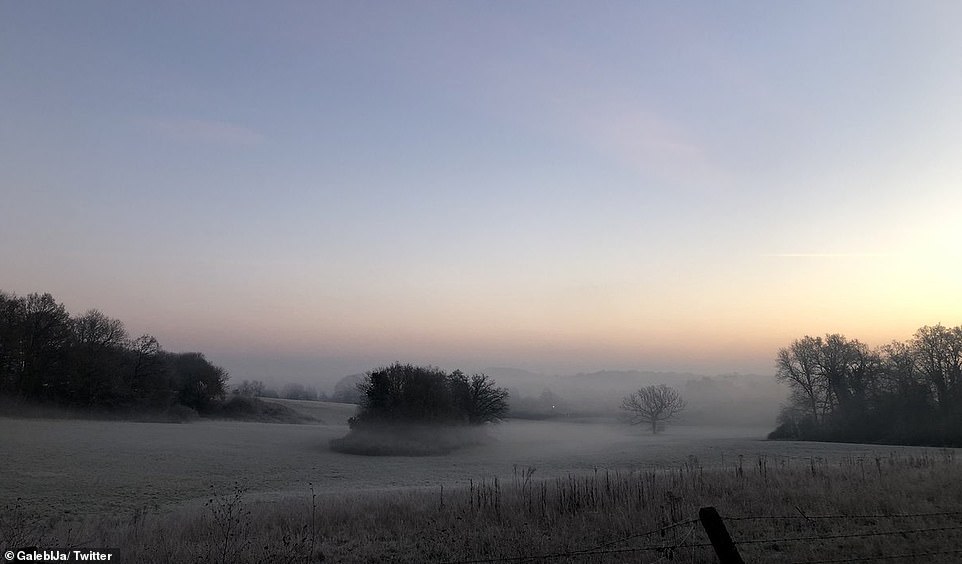 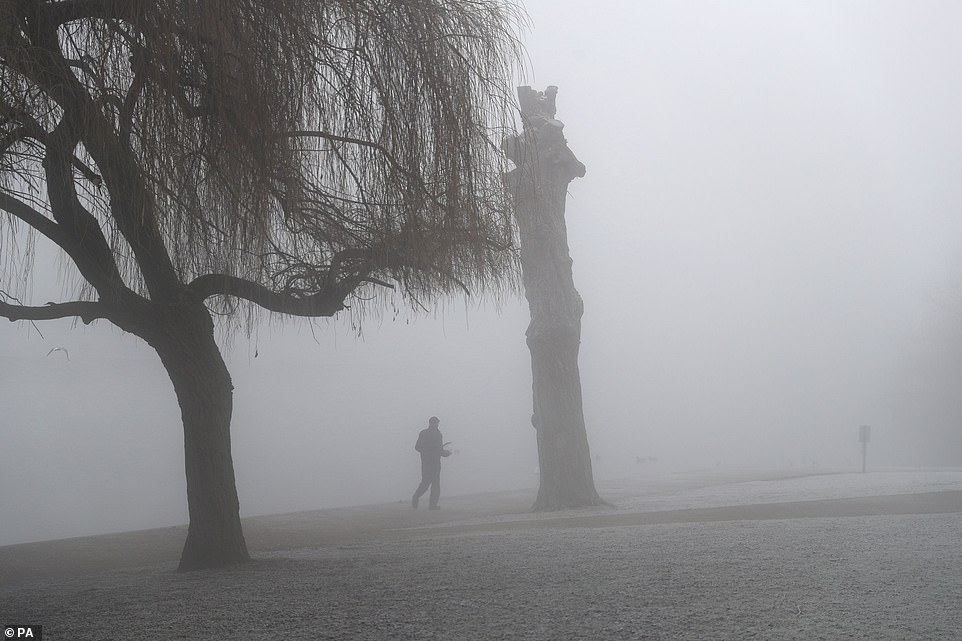 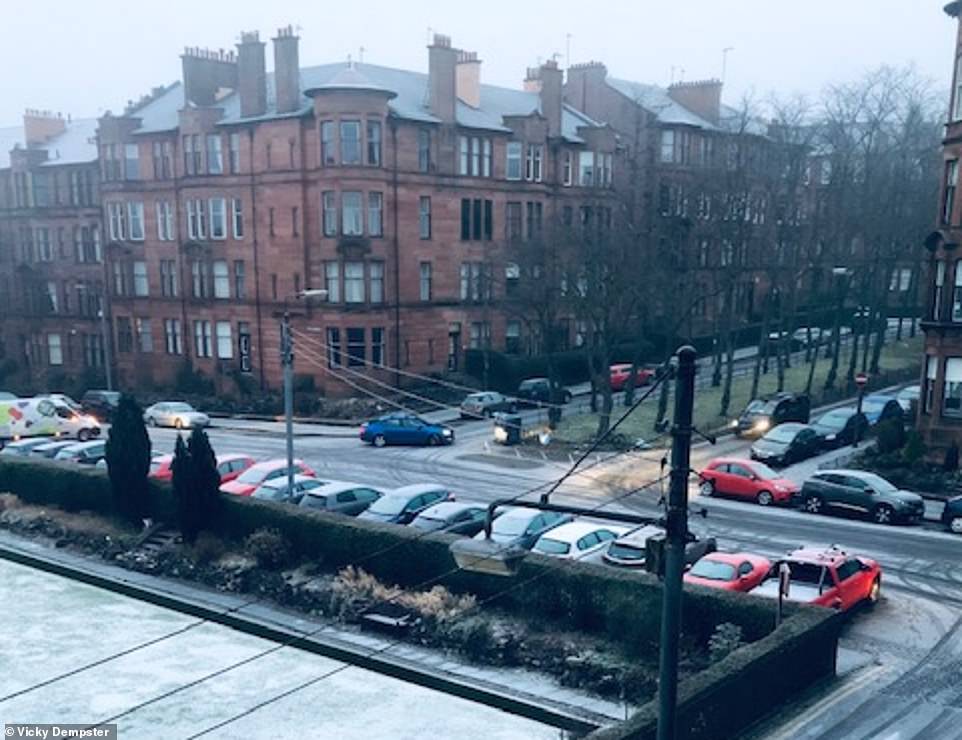 Icy roads and pavements in the Hyndland area of Glasgow this morning, with witnesses saying several people have slipped 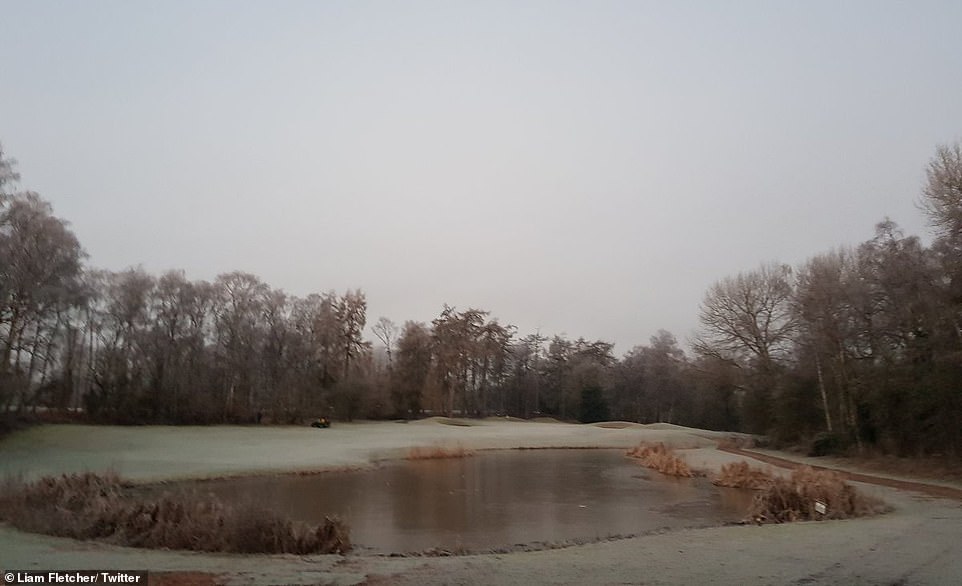 A frozen pond pictured today at a golf course in Enville, a village in Staffordshire between Stourbridge and Bridgnorth

This morning, ice and a blanket of freezing fog was forecast to extend across England, from the Pennines to the Thames Valley. The fog could affect flights and is expected to make rush-hour driving hazardous, forecasters say.

Before you grumble about the weather here, spare a thought for the folk of Chicago. They’ve been warned temperatures could fall as low as -70F, cold enough to bring on almost instant frostbite.

Nearly a dozen states in the US Midwest have been hit by a freezing blast that has left 83million Americans shivering. Five deaths have already been blamed on temperatures which are the lowest for a generation. 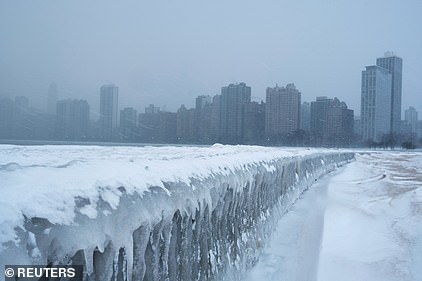 Windy city: Skyscrapers behind an ice-encrusted walkway by Lake Michigan this week in Chicago, Illinois

As schools and businesses closed and thousands of flights were cancelled, people were urged to stay inside because exposed skin could become frostbitten within minutes. They were also urged to avoid taking deep breaths to protect their lungs.

In Chicago, gas heaters were used to keep railway points from freezing and snow ploughs battled to keep the city’s roads clear while, next to the city, Lake Michigan turned into a vast ice rink. 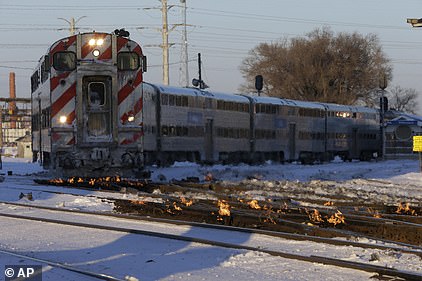 Wintry showers were due to have brought an inch more snow overnight, particularly in north eastern England as far south as the Humber estuary.

But worse is to come, with a further band of rain, sleet and snow due to arrive from lunchtime today. It could bring up to four inches of snow to Wales and the South West.

Most of the South, along with central and eastern England, Manchester, Liverpool, and South and West Yorkshire will see smaller snowfalls.

The wintry conditions are likely to last overnight and through tomorrow, even lingering into the evening. Only the far North of England, where it is due to be fine but cold, is likely to escape.

The weekend is set to be mostly fine, dry and cold, though areas near the east coast could face further wintry showers. Hard frosts are expected until at least Sunday. More very cold weather is expected through next week.

Yesterday morning, some made light of their grim commute. Footage of a man making his way down a road in Didsbury, Manchester, on skis was shared on social media.

There were two-hour traffic jams in some parts of North-West England, and railways around Liverpool were closed while ice was cleared.

Snow and ice also caused disruption in South-West England, with the A38 blocked between Whiddon Down and Okehampton, Devon, and schools closed.

There was a spate of road accidents across the country caused by treacherous roads yesterday. Motorists were warned to take extra care today and to take warm clothing, food, water and a shovel in case they become stranded.

Meanwhile Scotland is said to be facing more than a month of bone-chilling temperatures as Siberian winds batter the country. A long-range forecast by the Met Office predicts weeks of sub-zero conditions and snow flurries.

Western and northern parts of Scotland remain under a yellow ‘be aware’ warning for ice, which began last night and continues until 11am today. 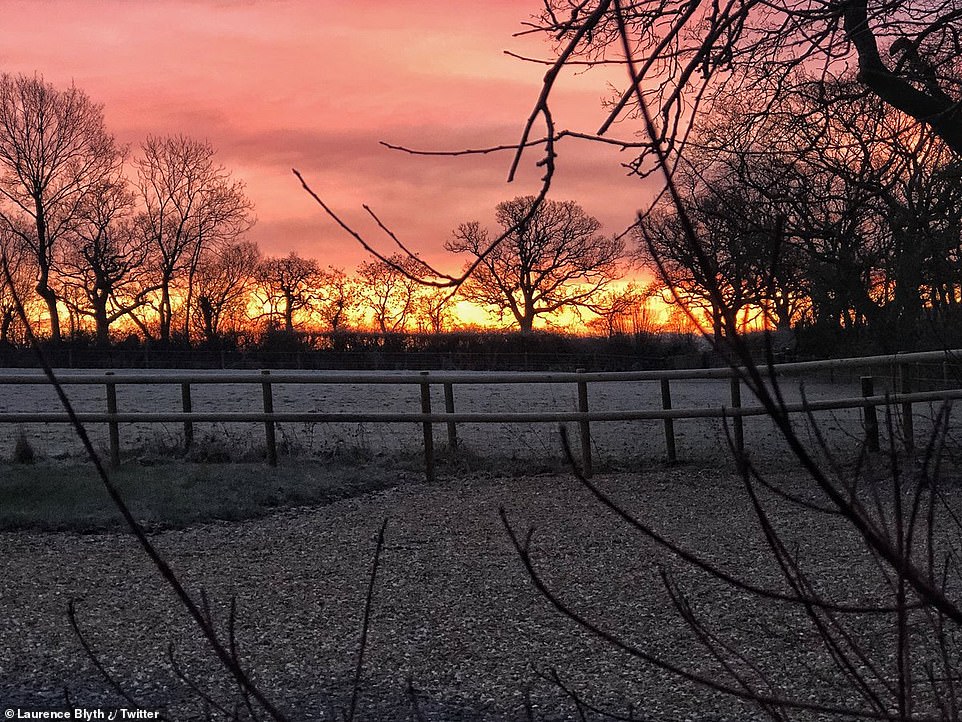 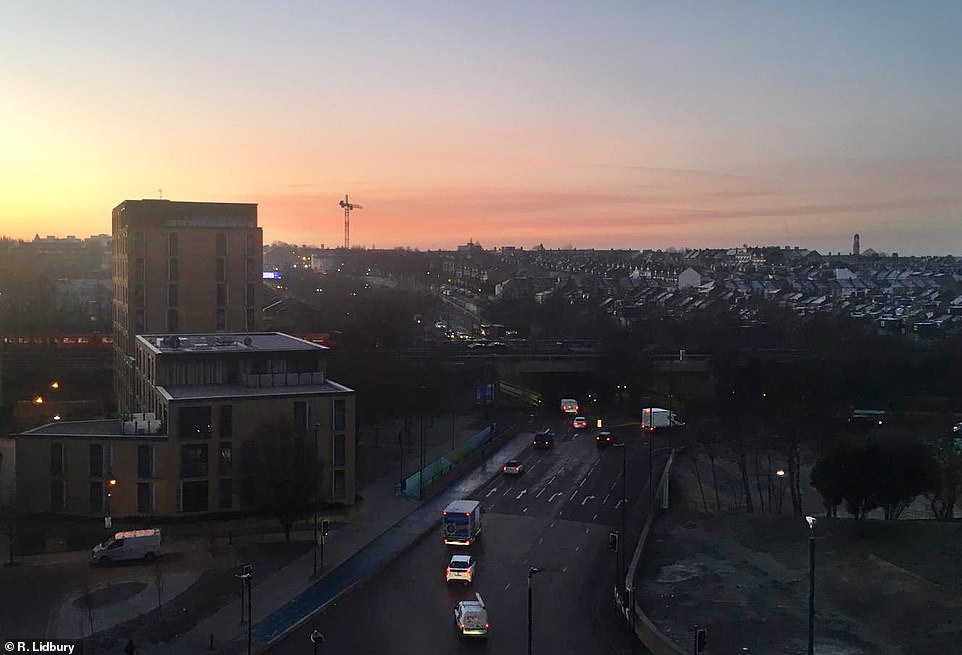 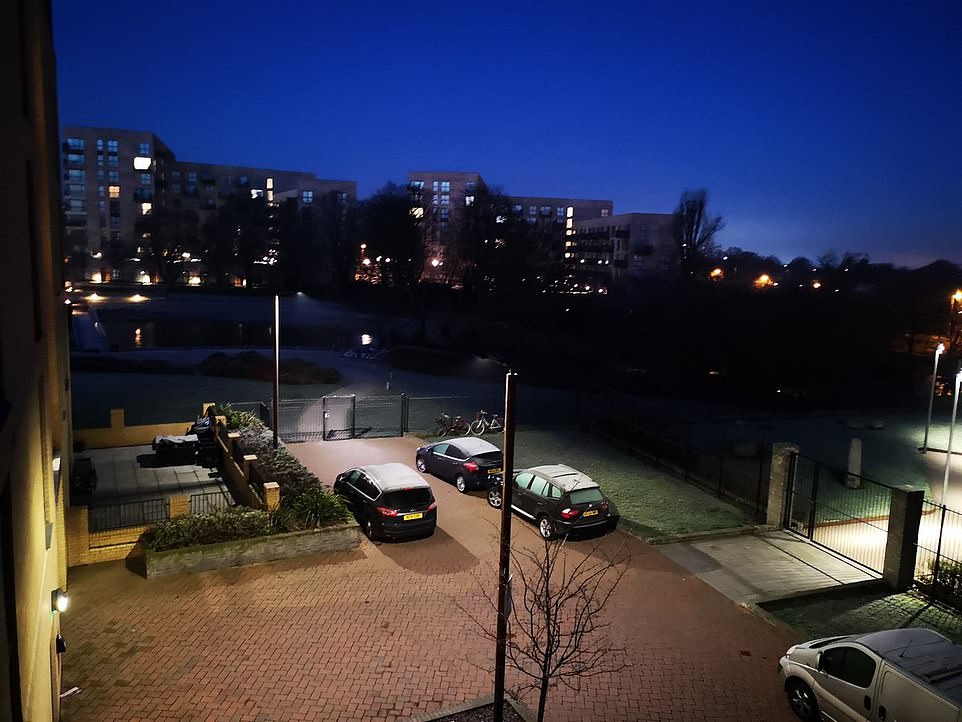 Frosty ground in Park Royal, North West London, this morning as the capital wakes up to sub-zero temperatures 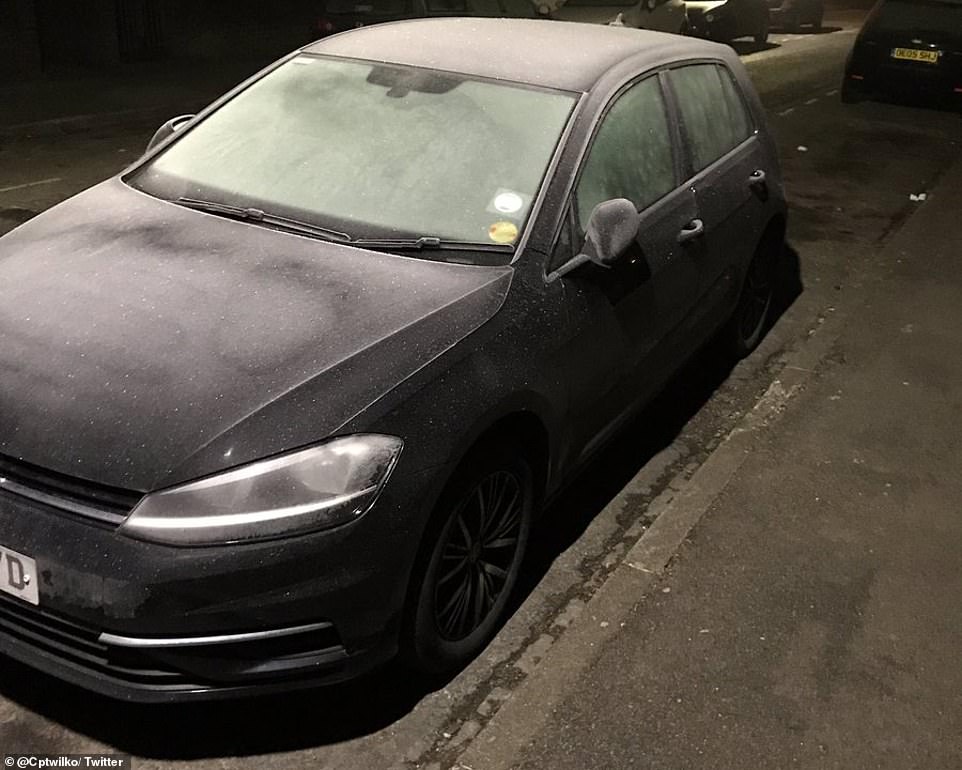 Frost sits on a car in Reading, Berkshire, this morning as the Met Office warned drivers to take extra care today 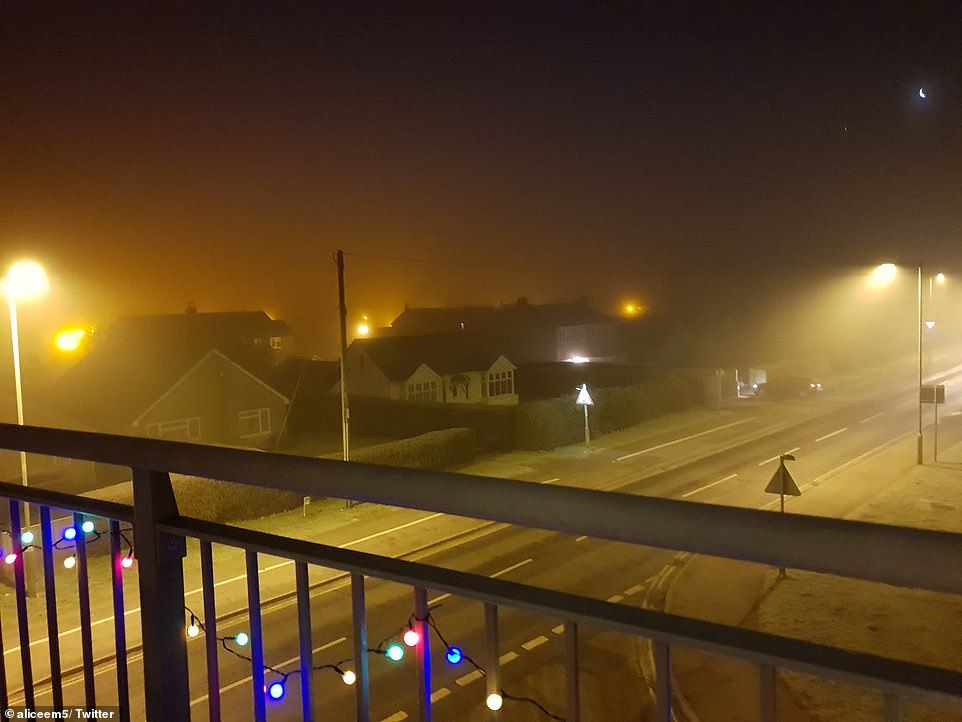 Frosty and foggy conditions this morning in Carterton, Oxfordshire, as commuters make their way to work

Commuters use skis as Manchester is blanketed in snow

At least two people from Manchester took the weather warnings as seriously as possible, setting out on skis for their morning travel. Footage of a man making his way down a road in Didsbury by ski was shared widely on social media.

University of Manchester student Gabrielle Sanderson, 20, filmed the skier and said: ‘There were quite a few people stuck at the bus stop since the traffic was blocked up. He was getting further than the traffic so I’d say he was pretty successful.’

Others on Twitter appeared to appreciate the man’s gear too, with user @Jaycee81161715 commenting: ‘I needed them this morning.’ Photos posted later appeared to show another skier, dressed in a bright orange jacket, joining the man.

Overnight showers were expected to freeze on untreated surfaces, coupled with the threat from melted snow refreezing. Tonight, another yellow warning for snow and ice kicks in, this time for North and East Scotland, including Edinburgh.

Fakenham abandoned racing today as the cold snap continues to bite around Britain.

An official announcement preceded the scheduled 7am inspection, with the Norfolk course frozen under a light dusting of snow following a -6.7C (20F) overnight low.

A Wincanton inspection was due to take place at 8am to determine whether there will be any jumps action in Britain today – with all-weather cards at Southwell and Newcastle set to go ahead.

Chepstow has also announced an inspection today at 2pm, for tomorrow’s scheduled card. The course is currently described as ‘frozen’.

In advance of a planned inspection today, Catterick said its fixture tomorrow has been abandoned after temperatures dropped to -7C (19F) in North Yorkshire.

But winter’s icy grip will tighten as freezing February gives way to an even colder March. The Met Office long-range forecast says it will stay ‘mostly cold, with frost and ice likely overnight’ between February 4 and 13.

And from Valentine’s Day until February 28 it warns ‘cold conditions are often likely to dominate the weather’.

It adds: ‘Towards late February there is the possibility of a colder, more easterly flow developing, though the signal for this has decreased in recent days.’

The icy conditions will raise the risk of people falling on icy pavements and streets. There is also likely to be an impact on the transport network, meaning longer journey times by road and rail.

The avalanche risk in three of Scotland’s five mountain areas has been raised to ‘considerable’ following recent heavy snowfall.

Scottish travellers endured more disruption yesterday. On the roads, a gritter overturned on the A828 near Appin, Argyll. The driver was taken to hospital, though not badly hurt. The A85 in Argyll was shut in both directions when an HGV overturned east of Dalmally.

Emma Smith of the Met Office said: ‘Looking ahead through February, generally cold conditions are likely through the month. Things could turn even colder at the beginning of March.’

* Taken any photos of snow in Britain today? Please email pictures@mailonline.co.uk with their location *

Which UK schools are shut due to the cold snap today?

Dozens of schools were closed across Britain today due to the severe weather, with at least 20 reported as being shut in the Scottish Highlands, five in Merseyside and three in North Wales. Here is a list of those reported closed so far: