Freezing fog is making for treacherous travel conditions for large swathes of Britain today as it prepares for a further hit of heavy rain and wind from Storm Diana tomorrow.

With low temperatures the length and breadth of the country this morning fog will turn to frost as it hits people’s windows and car windscreens, triggering a yellow weather warning for London, the south east and east of England.

Drivers are being warned of dangerous road conditions and to allow extra time for their journeys until this afternoon.

Low-lying fog around the capital could cause chaos at airports with London City warning of possible delays and cancellations. Meanwhile train passengers are complaining of slow-moving services due to poor visibility.

This all comes as Storm Diana makes its way from the Azores, bringing up to 80mph gusts and ‘danger to life’ conditions across coastal regions from Devon and Cornwall to the north west of Scotland and Wales.

Freezing fog is making for treacherous travel conditions for large swathes of Britain today as it prepares for a further hit of heavy rain and wind from Storm Diana tomorrow. Pictured: Early morning fog in Flintshire, North Wales 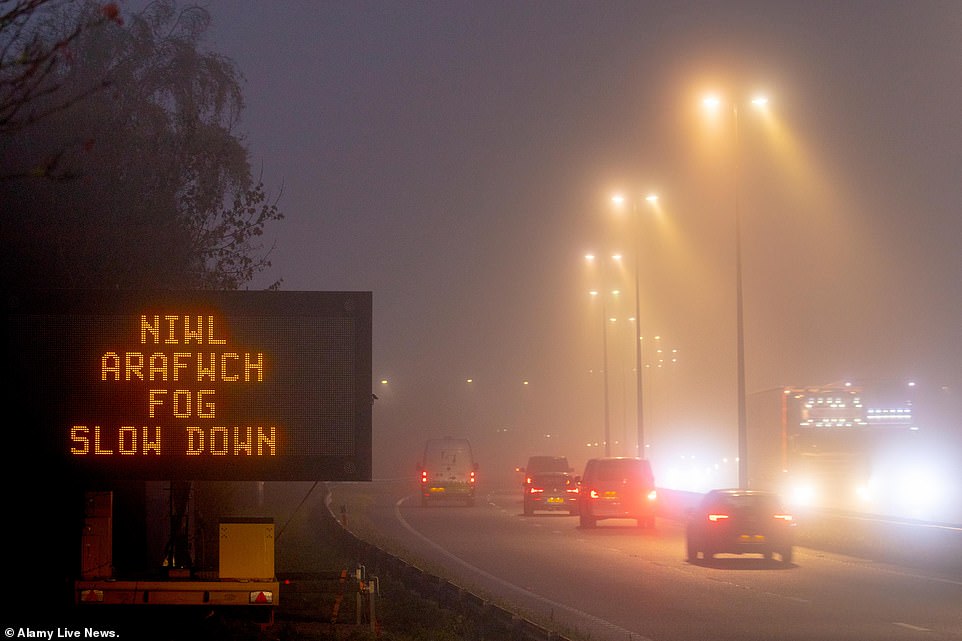 With low temperatures the length and breadth of the country this morning fog will turn to frost as it hits people’s windows and car windscreens, triggering a yellow weather warning for parts of the country. Pictured: Flintshire, north Wales 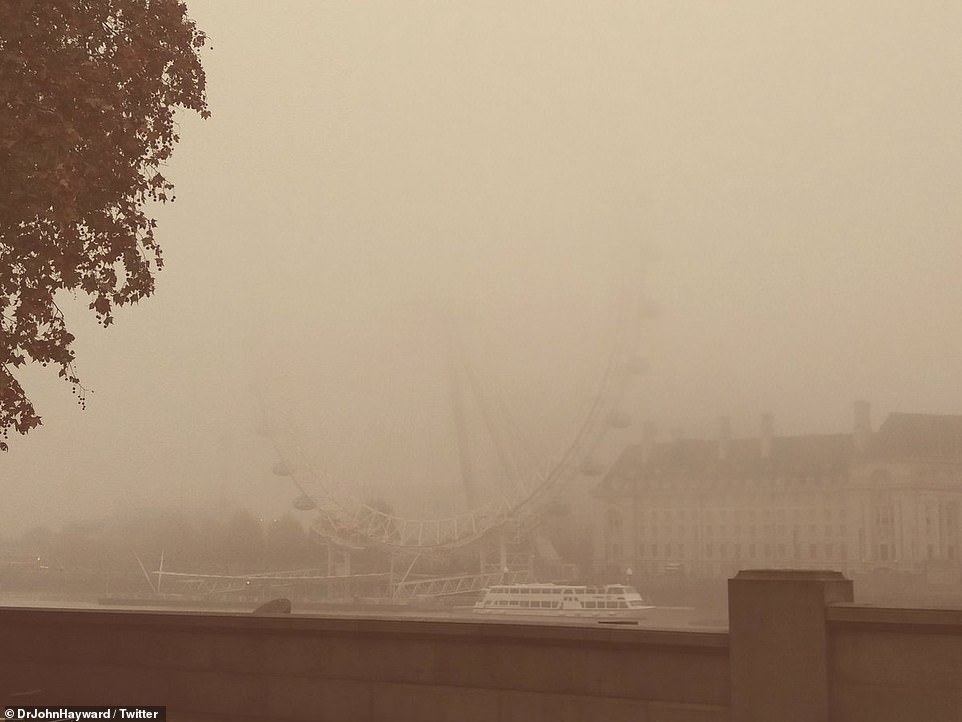 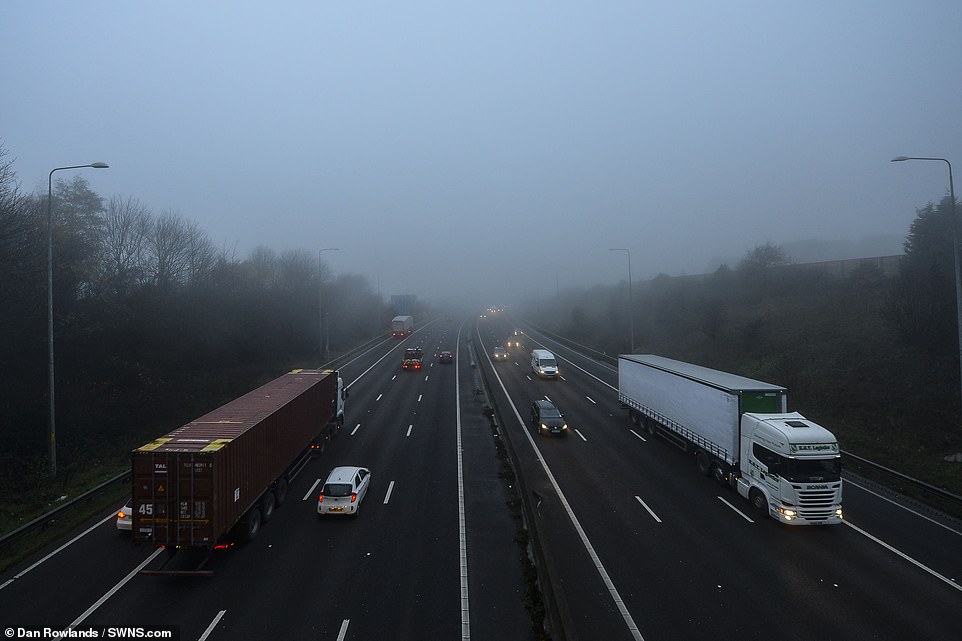 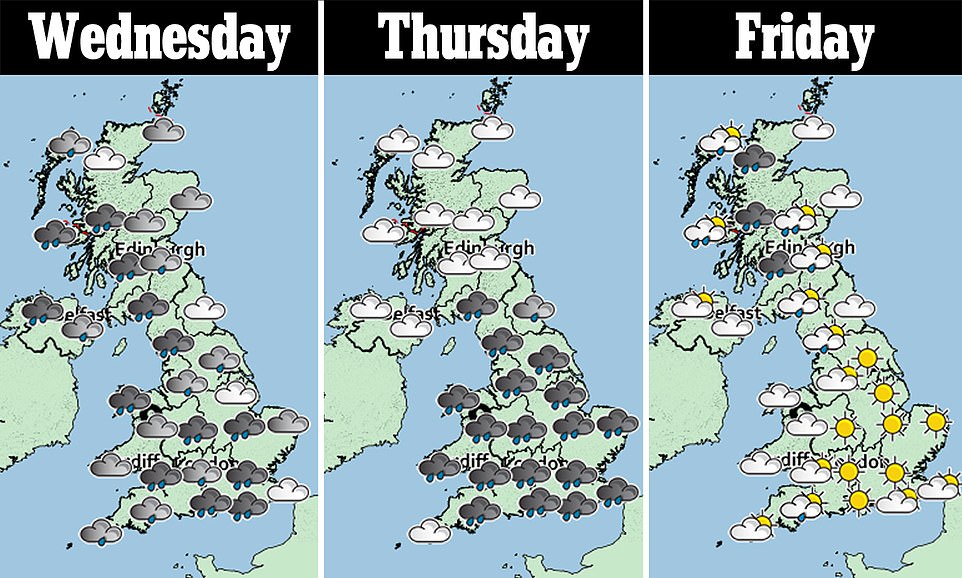 The Met Office has weather warnings in place for the north west of England, south west England, the West Midlands, Yorkshire and Humber, Wales, Northern Ireland, Scotland and Orkney and Shetland throughout Wednesday and Thursday.

They warn of severe wet and windy weather for large parts of the country, with risks of road closures, power cuts and potentially fatal damage to buildings and beach material along the coast.

There is also risks of flooding due to heavy rain with 50mm predicted to fall in 12 hours on Wednesday.

Tough conditions are the result of different weather fronts coming in from the Atlantic Ocean and Portugal as Storm Diana prepares to hit parts of the UK.

The storm, named by the IPMA Portuguese weather service, is currently threatening the Azores and is due to make itself felt mainly over western parts of the UK on Wednesday. 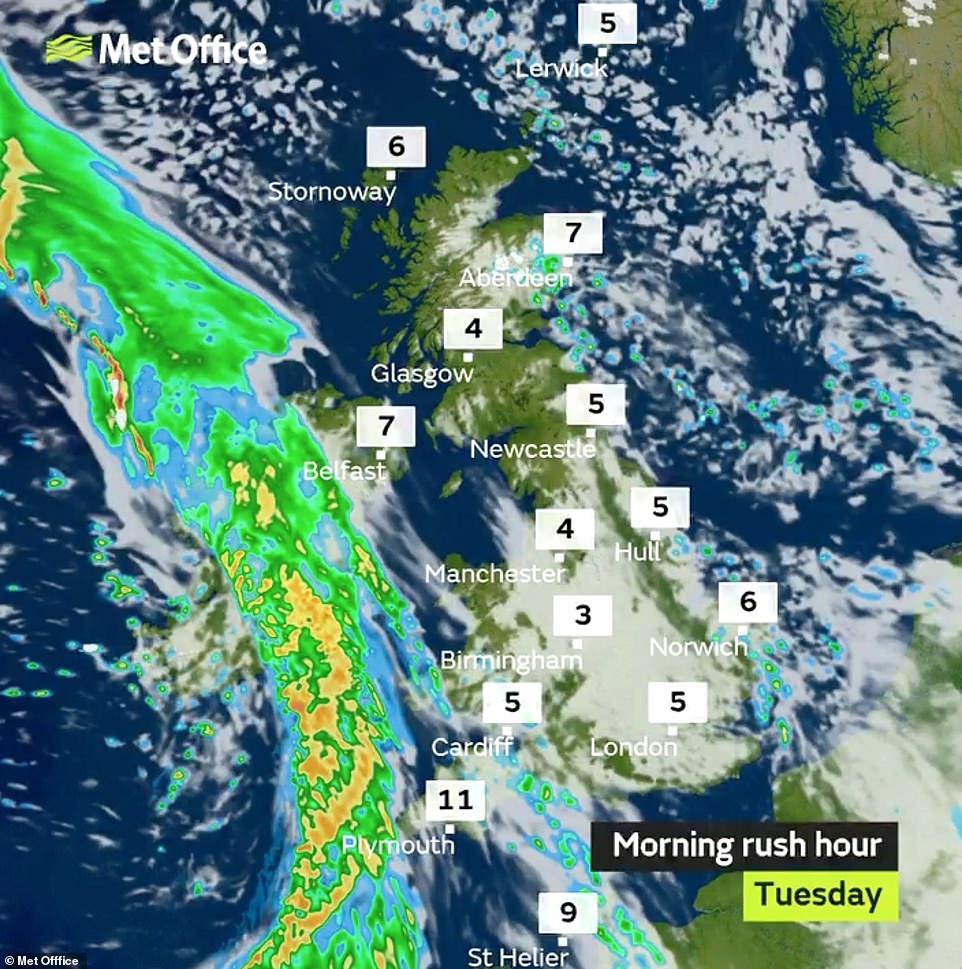 A Met Office weather map shows fog across most of England, Wales, parts of Scotland Northern Ireland this rush hour 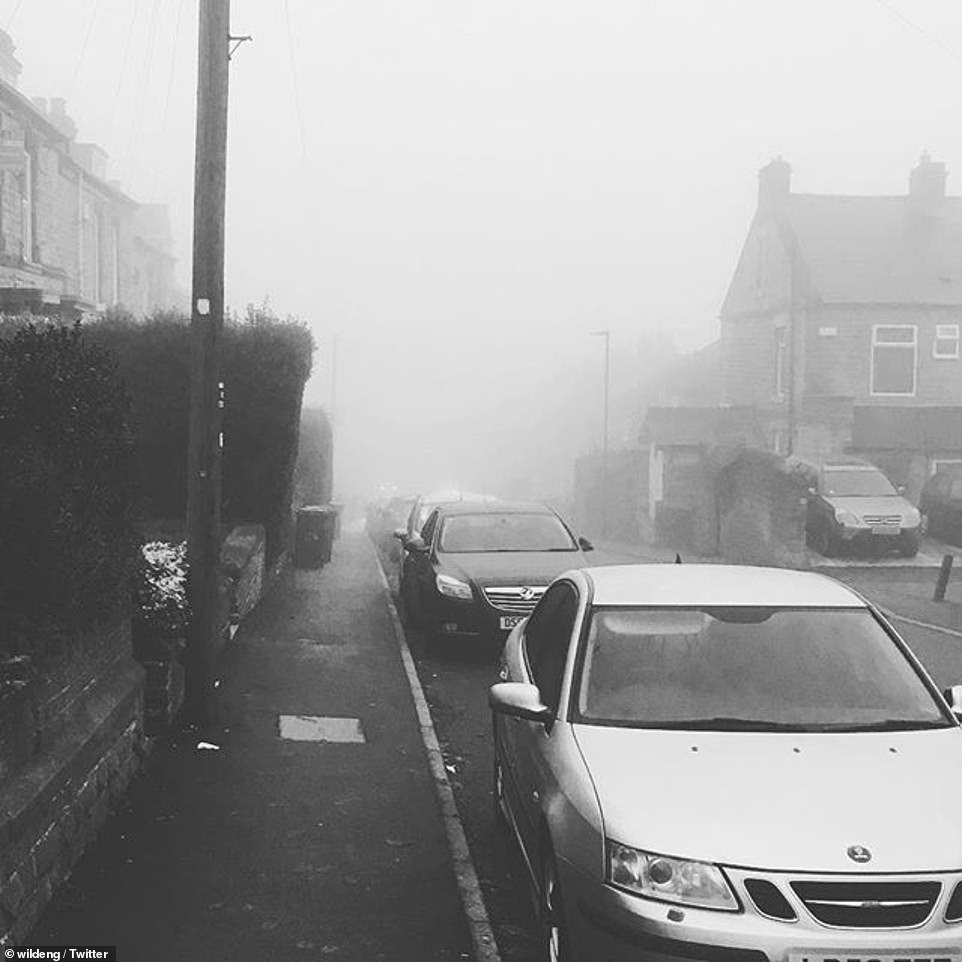 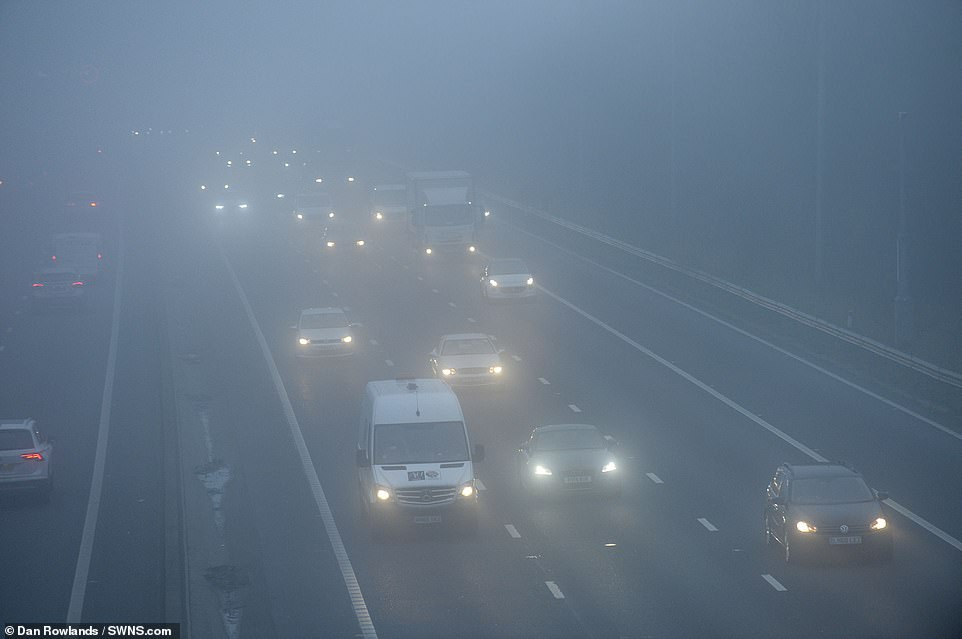 Lights on! Foggy weather in Morley near Leeds made for difficult conditions for commuters on the M62 this morning 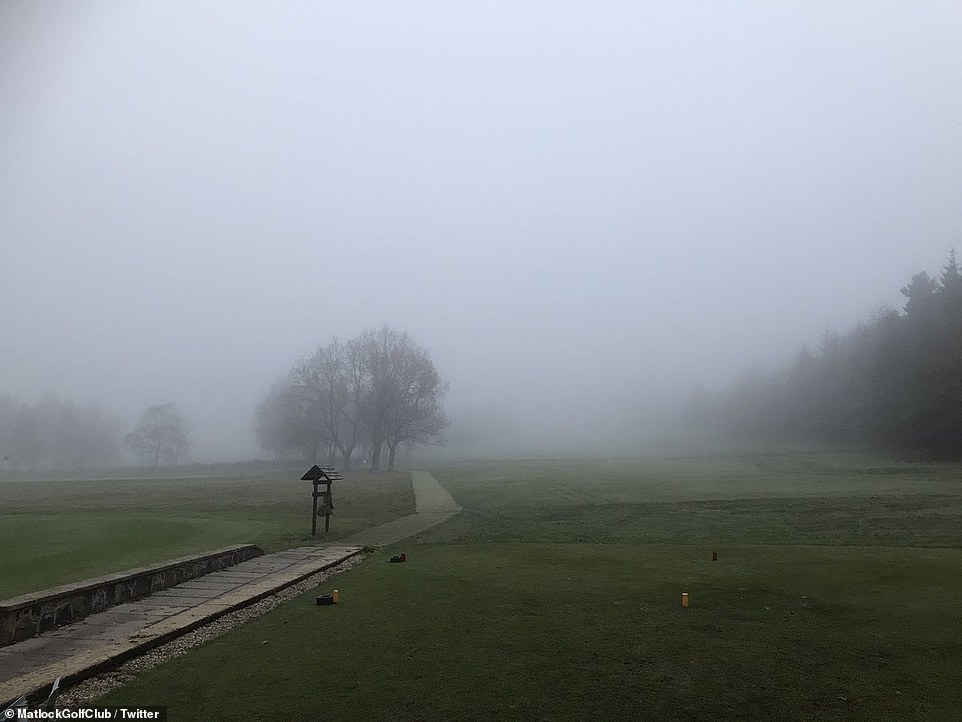 Matlock Golf Club near the Peak District is closed this morning due to fog. They posted this picture on their Twitter page

Dan Harris, deputy chief meteorologist at the Met Office, said: ‘It now looks very likely that we will see a major change in the UK’s weather early in the week ahead.

‘We expect spells of wet and windy weather to sweep across the UK from the south west from Tuesday, although at the moment there is uncertainty around the timing and the focus for the heaviest rain and strong winds by Wednesday as Storm Diana approaches our shores.’

After cold but bright spells last weekend, wet and windy weather is pushing in from the south west today.

A separate system to Diana, the front will move eastwards bringing rain and blustery conditions to all parts by the end of the day.

After building in the Atlantic, Storm Diana is due to arrive on Wednesday as a low pressure system tracks to the north of Ireland.