Stormy weather conditions caused chaos for morning commuters in parts of Britain today after 80mph wind gusts and more than an inch of rain left cars smashed, roofs torn off and homes without power.

A tree blocked the line between Chessington and Motspur Park in South London, the line between Marks Tey and Sudbury in Suffolk was shut after a train hit a tree and there was flooding between Romsey and Southampton.

Heavy rain flooded the railway between Swindon and Bristol Parkway causing 45-minute delays on services, and a landslip between Horsham and Dorking resulted in diversions and disruption on South Western Railway.

The Environment Agency imposed 176 flood alerts and 37 warnings across England after more than an inch of rain fell overnight – with 1.2in (30mm) recorded in Hampshire; about a third of its 3.2in (81mm) monthly average.

A roof was blown off a building in Slough, Berkshire, onto the road last night amid strong winds which battered the UK 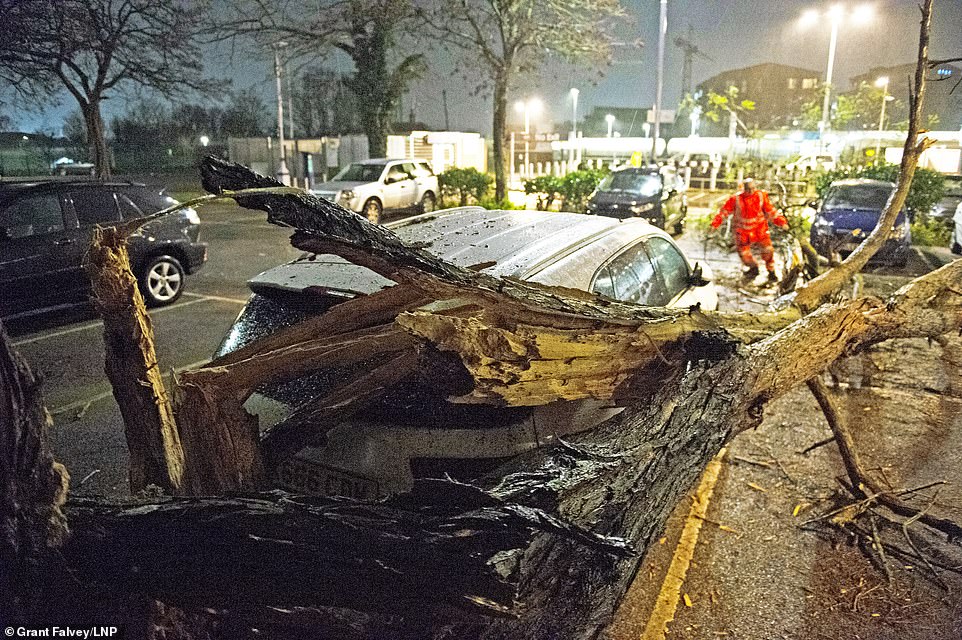 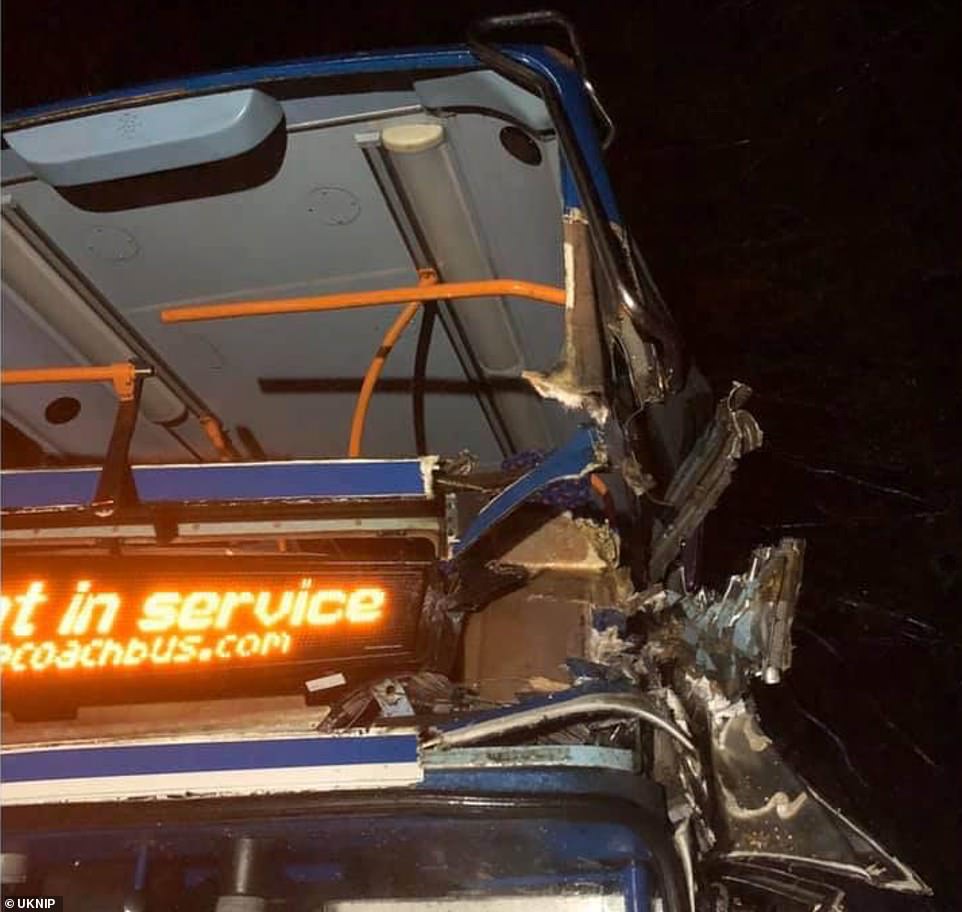 A Stagecoach bus was damaged by a tree which fell in the storms in Highclere, Berkshire, last night – but no one was injured 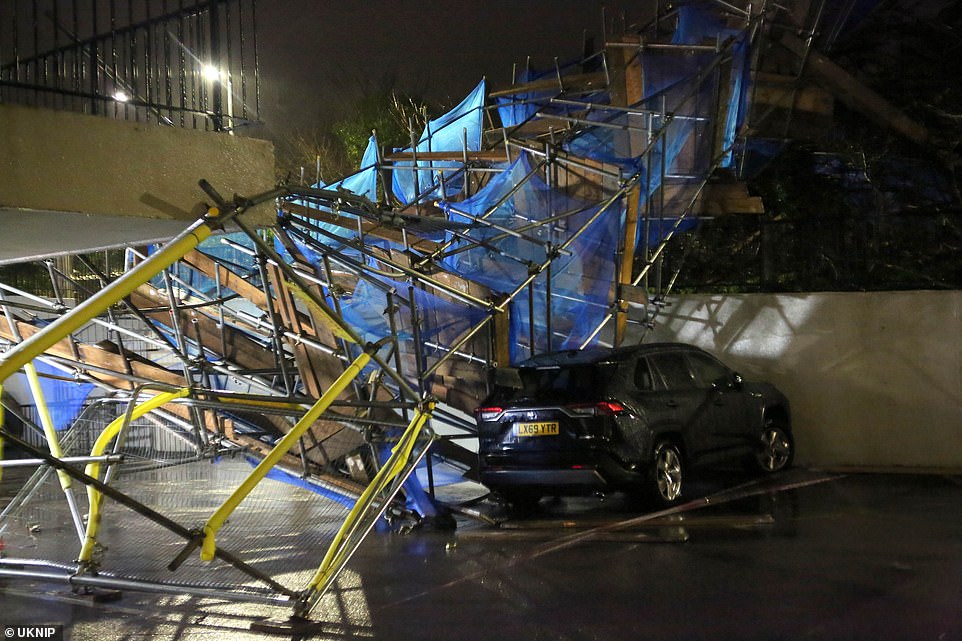 A ten-storey scaffolding tower fell from a block in Orpington, Kent, last night amid the stormy weather conditions

In Slough, Berkshire, a huge section of roof was torn off a building and sent crashing into a busy high street. Onlookers were sifting through the rubble after the incident but police do not believe anyone was seriously hurt.

It is believed the roof, which appeared to have landed on a van, was ripped off a block of flats housing around 200 residents. Council officers attended the scene, where 50mph winds were recorded, and helped clear the street.

Where are the train delays in Britain today?

But the stormy weather is now due to ease temporarily – before another spell of wind and rain hits the UK.

The 48-hour period of wild weather began with Storm Brendan hammering Ireland on Monday, causing thousands of homes to lose power, before bringing winds in excess of 120mph to parts of Scotland.

Airlines were forced to divert flights scheduled to land at Gatwick Airport on Monday evening while ferries and railways faced disruption. A second low-pressure front brought further strong gales to the UK yesterday.

A yellow warning of wind covering much of England expired at 5am today, while a rain warning covering South East England was scheduled to cease at 9am.

Met Office meteorologist Alex Burkill said: ‘It will take a little while but the rain should clear by lunchtime.

‘Once it does clear away, otherwise tomorrow, most places are in for some decent sunny spells.’ 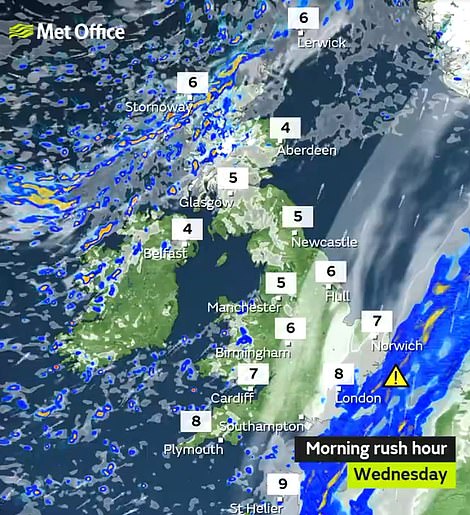 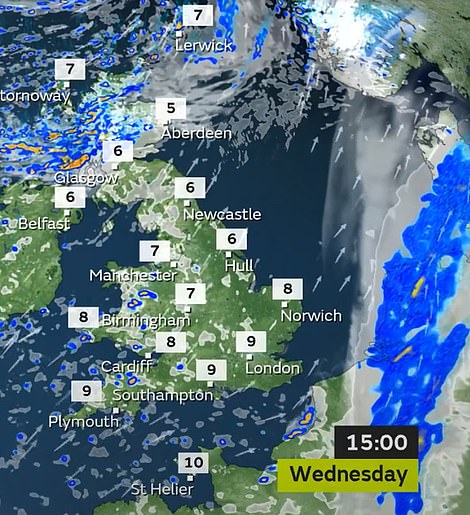 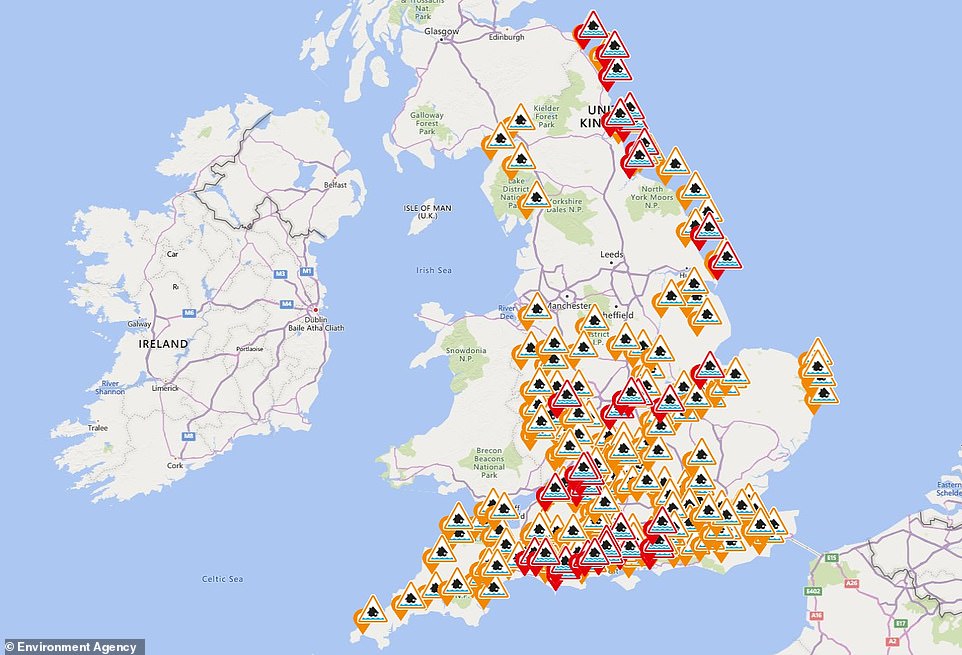 There could be further thundery showers mainly to the North and West of the UK, with the chance of sleet and snow across the hills and mountains of Scotland and Northern Ireland, according to the forecaster.

Although the wind is due to ease off today, conditions will still be blustery, Mr Burkill said, and temperatures are due to dip slightly to 9C.

But he warned that more unsettled weather was ahead tomorrow, particularly during the second half of the day, when places across the country could expect wet and windy weather. Drivers were advised to take extra care.

‘It doesn’t look as bad as what we’ve had through the past couple of days,’ he added. ‘At the moment it looks like we’ll stay warning free (on Thursday). It’s just a windy day rather than a hazardous one.’

A gust of 78mph was recorded on the Isle of Wight yesterday, while the village of Libanus in the Brecon Beacons National Park in South Wales saw 42mm of rainfall in 24 hours, according to the Met Office.

Yesterday trees falling on the lines caused travel disruption in Hampshire, while Great Northern said a temporary speed restriction of 50mph was put in place between Cambridge North and King’s Lynn.

Motorbikes, cyclists and cars towing caravans were banned from the 1,500ft-long Britannia Bridge, which links the island of Anglesey and mainland Wales, due to the winds.

Around 150 homes near Penzance, Cornwall, were blacked out by a power cut when trees came down on overhead cables and a 50-mile stretch of the county was put on flood alert.

Properties were also flooded in the Somerset village of Dunkerton. Coastguards issued a safety warning, urging people to avoid beaches, piers and headlands in case they were swept away by huge waves.