UK weather: More than 120 people are rescued from flooding

More than 120 people have been rescued after being trapped by devastating flooding after two weeks’ worth of the month’s average rainfall came down in just four hours last night.

Emergency services in Northern Ireland received a call every 45 seconds as roads became impassable, bridges collapsed and drivers were rescued, after 2in (50mm) of rain fell in some areas that also suffered thunderstorms.

The departure lounge at City of Derry Airport was left underwater with all flights cancelled, while football pitches were flooded and there was severe disruption on the Coleraine to Antrim railway line due to the weather.

And in Scotland a family of four were rescued from a campervan on Skye in the early hours after a river burst its banks and left them surrounded by water, while a man was also rescued from his house on the isle of Barra.

Elsewhere in Britain, parts of South East England including Kent, Norfolk or Suffolk could see temperatures of up to 77F (25C) on a sunny day today, with the Met Office expecting some of the recent warm, humid air to be lost. 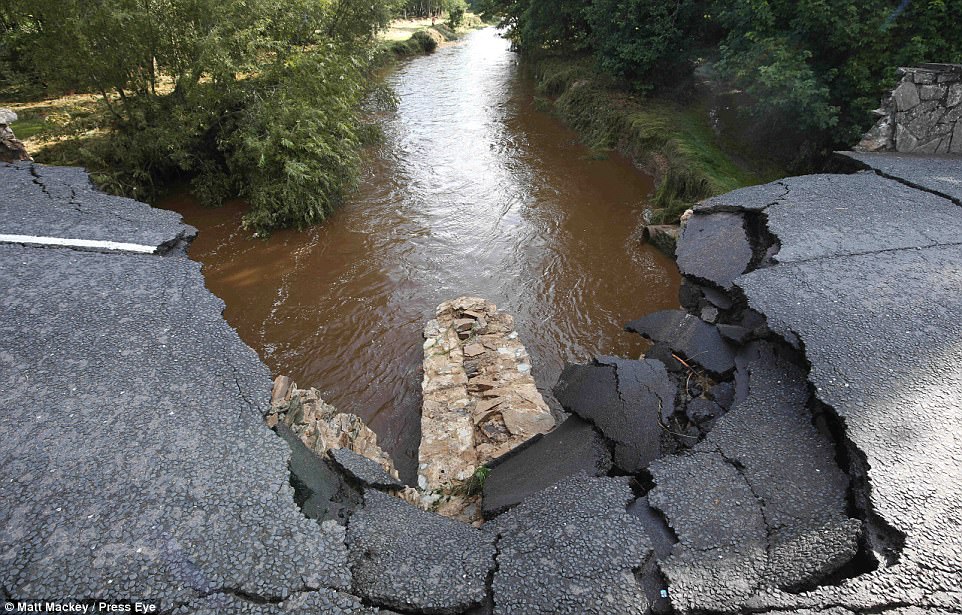 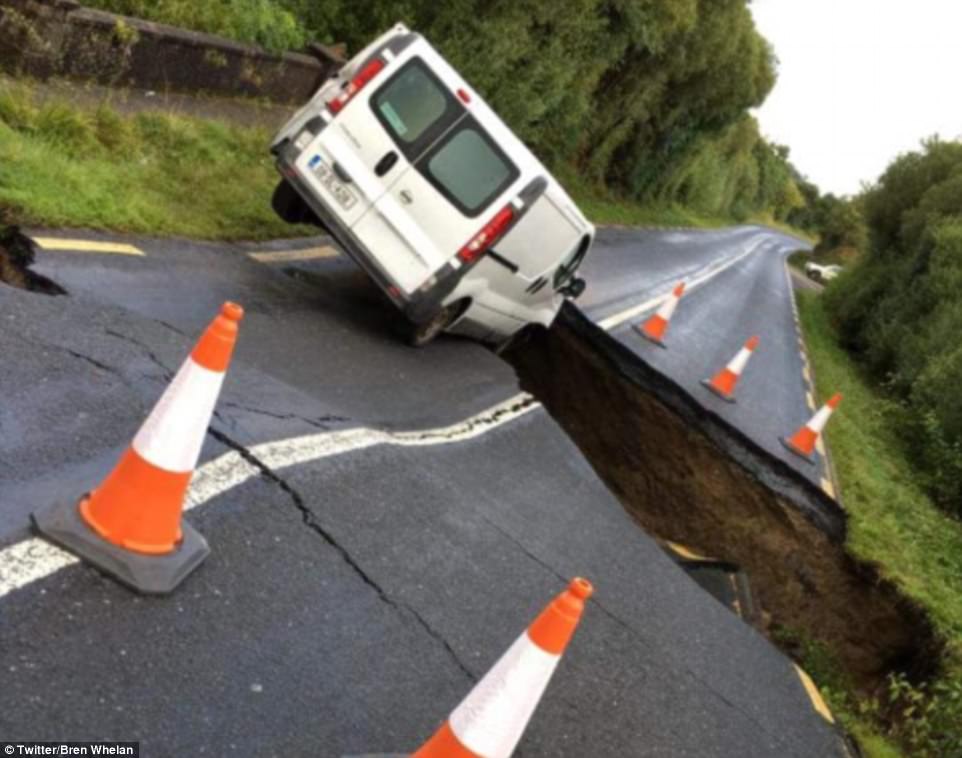 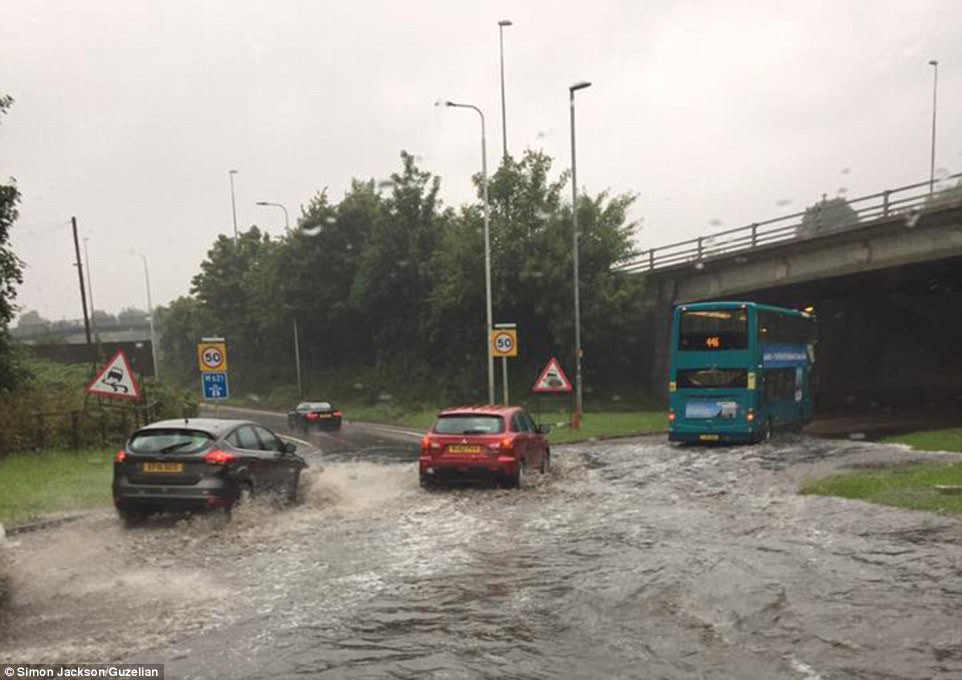 While heavy rain had been forecast for parts of Northern Ireland and Scotland last night along with a Met Office weather warning, the warm and sunny weather expected in England has not quite lived up to expectations.

The blast of tropical air expected to warm southern England yesterday did not manage to hit the forecast temperatures of up to 81F (27C) in the South East, peaking at 78F (25.3C) in Bude, Cornwall, the Met Office said.

Overnight, the North West of Northern Ireland was worst hit by the flooding, with Londonderry and Tyrone suffering especially badly as firefighters rescued 93 people trapped by flood water in their cars or homes.

Dawn Grieve, who was rescued with her two young sons from their home in Ivy Mead, Derry, by tractor, told the BBC: ‘I had to leave the house, I actually got a tractor ride out of there by two local boys.

‘Their mum lives at the top of our street. I have two young boys, one is four and one is two, and we had to get out of there at about half three this morning. It was too bad for them – they were scared.’

Motorist Paul Duddy also told the BBC that he had ‘never seen anything like this in all my life’, adding: ‘It was terrifying, particularly whenever I seen the water coming up over the bonnet of the car.’

Heavy rain also pummelled parts of the North of England today, as roads and homes were inundated with flood water in Leeds and York. It has sparked panic among people of both cities after the devastating flooding of 2015. 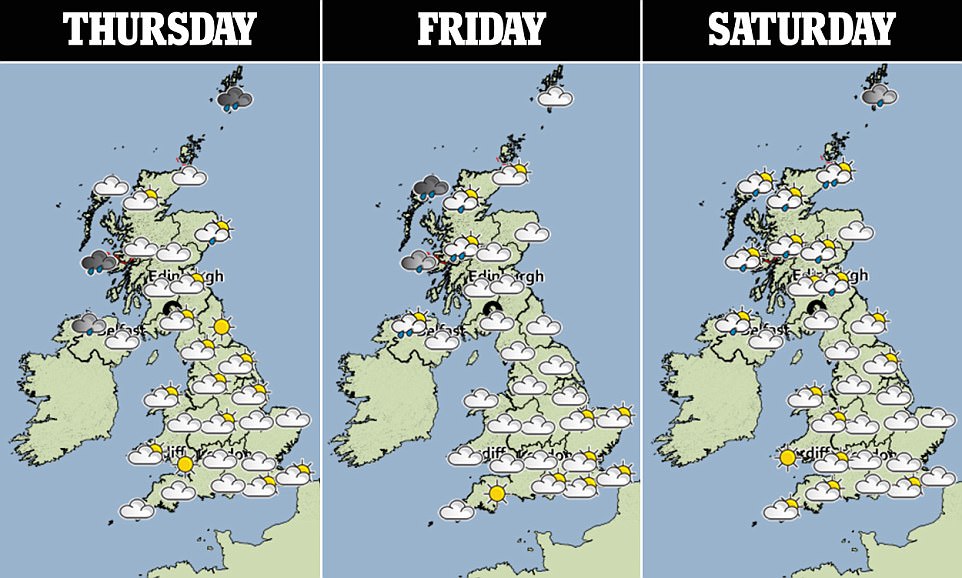 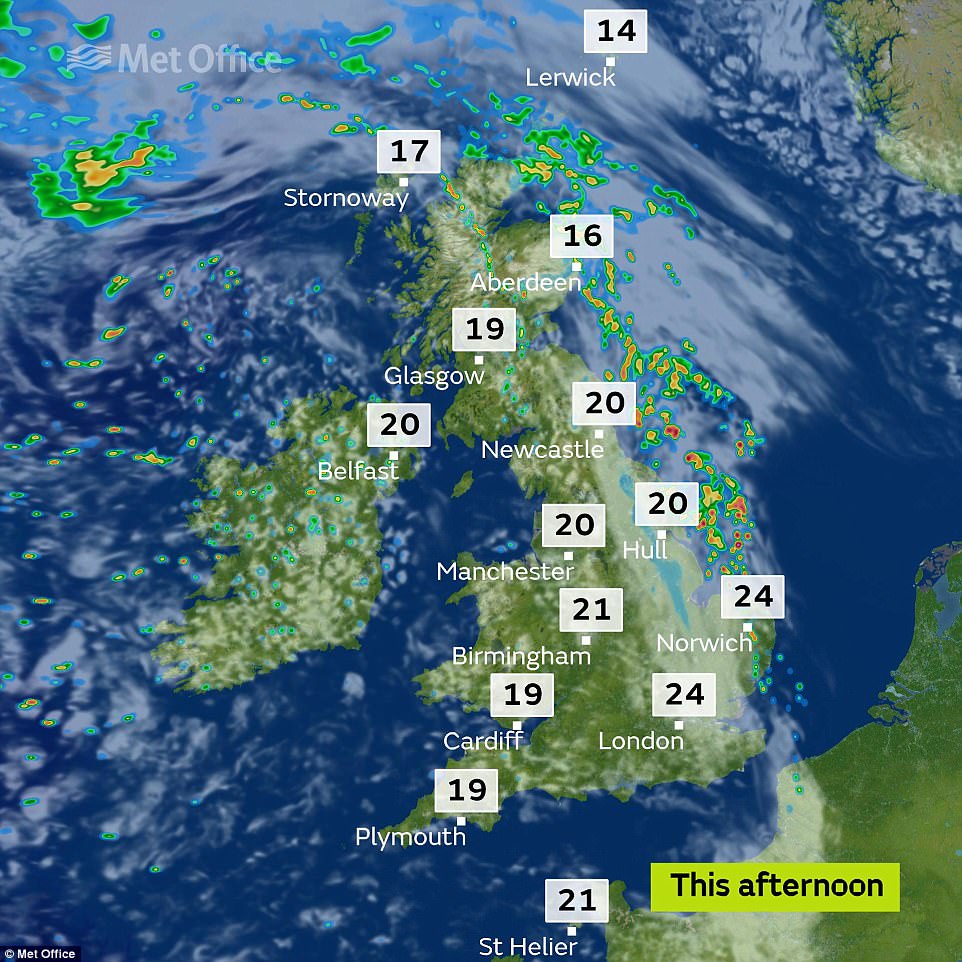 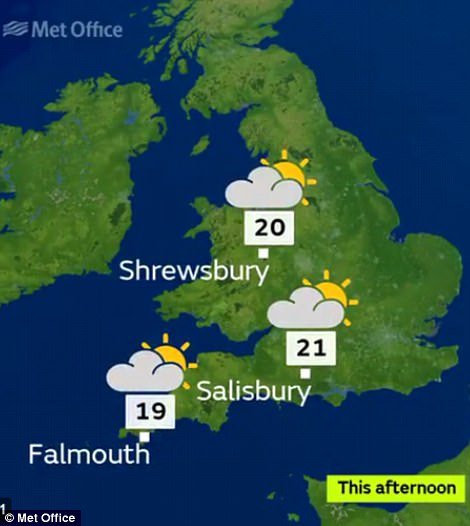 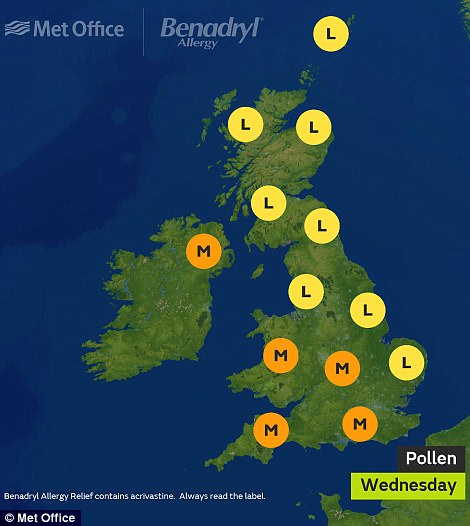 These three areas as sunny hotspots in England today (left), while the pollen count is moderate in some areas today (right)

Samantha Last said water was cascading into an Asda store in Leeds this morning as shoppers arrived in wellies, adding: ‘It was worrying that not only was the water in the entrance but it had come into the store.’

Leeds resident Tina Murray said she had rescued her rabbits from drowning in her waterlogged garden, while Andrew Parkin told how there was a river of water in a car park where he works in the Seacroft area of the city.

Fire crews received 402 emergency 999 calls between 7pm yesterday and 4am today – and received one every 45 seconds between 9pm and 11pm last night. More than 30 people were also rescued by the coastguard.

Alan Walmsley, assistant chief fire officer at Northern Ireland Fire and Rescue Service, said crews ‘worked in extremely challenging circumstances to reach people’ and ‘a number of roads were impassable due to flooding’.

And Ryan Gray from the Coastguard told the BBC: ‘Flood water up to 6cm (2.4in) in depth will take a human being off their feet and if it does so, it’s very unlikely that the person will be able to stand up again.’

He added that the floodwater was ‘lifting vehicles up and taking them down’ and the rescue teams did their best to calm down people because there was ‘a little bit of panic’.

Derry City and Strabane District Council opened centres to temporarily accommodate people affected by the flooding, and will be providing a scheme offering emergency financial assistance to those affected. 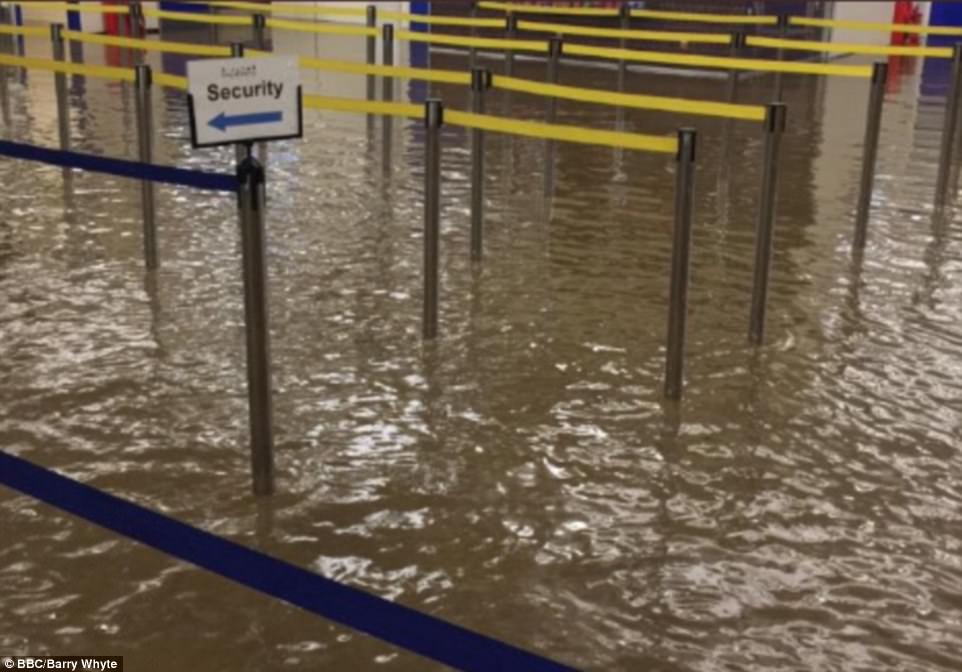 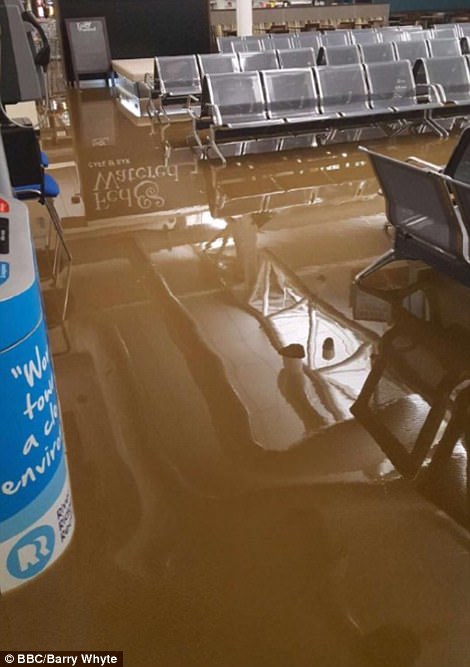 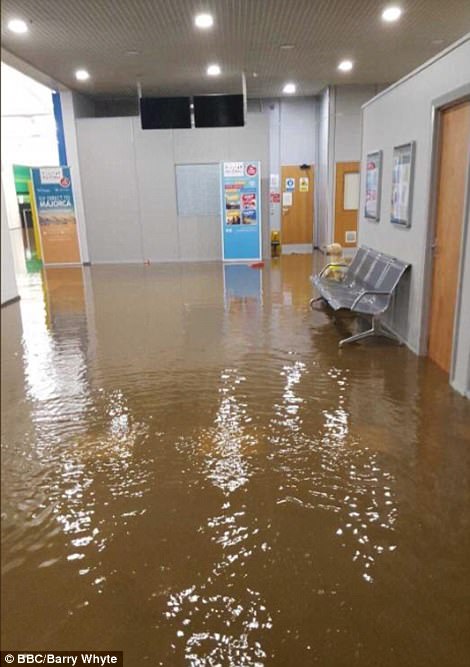 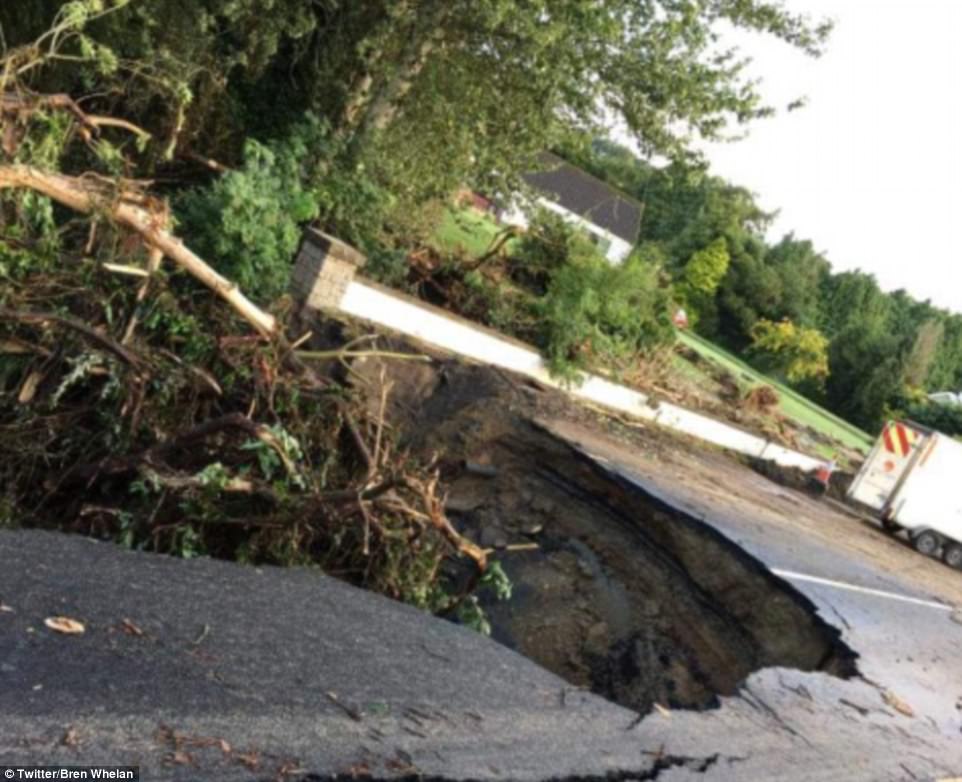 The downpours swept in from the Atlantic Ocean, hitting Co Donegal before moving across Northern Ireland yesterday evening. Met Eireann and the Met Office issued yellow rain warnings for the northern half of the island.

Across the border on the Inishowen peninsula in north Donegal, roads turned into rivers of water as rain battered the area, while the Ballynamee Bridge collapsed on the Cumber Road in Claudy near Londonderry.

A Northern Ireland Fire & Rescue Service spokesman said: ‘NIFRS has carried out a number of rescues of persons trapped in vehicles in flood water and we would advise all road users to exercise extreme caution.’

The greatest amount of rain recorded overnight was 2in (50.4mm) at Lough Fea in the Sperrins between 4pm and 8pm last night, but there were also problems in Scotland where the Met Office had forecast up to 2.8in (70mm).

On Skye, a family were rescued from a campervan after a river burst its banks and left them surrounded by water. It is thought the two adults and two children were asleep when the incident happened at around 4.30am.

The campervan was parked beside the river at Glendale on Skye when the banks burst. The occupants raised the alarm and firefighters, Coastguard rescue teams and the Scottish Ambulance Service went to the scene. 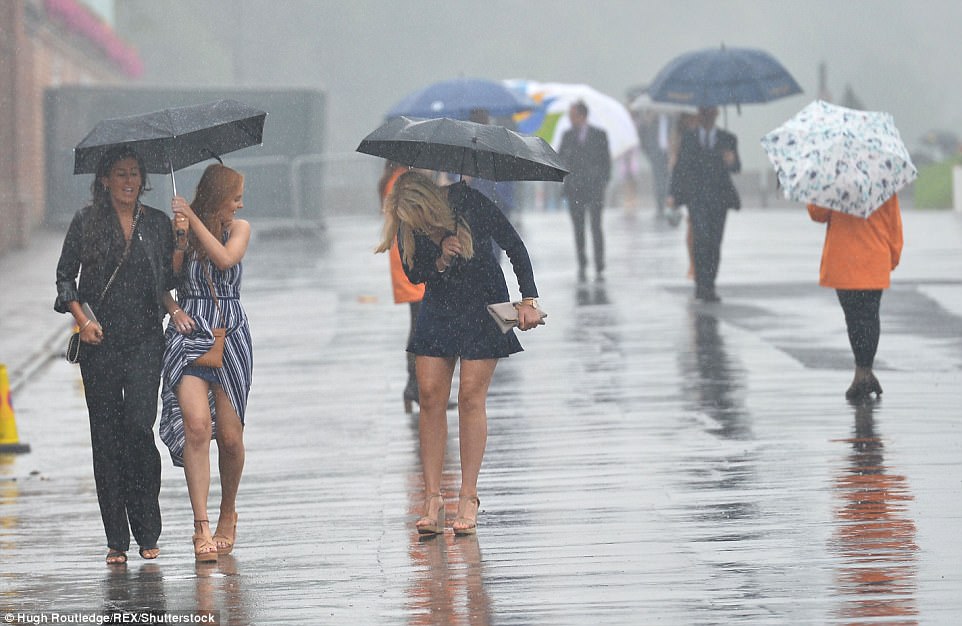 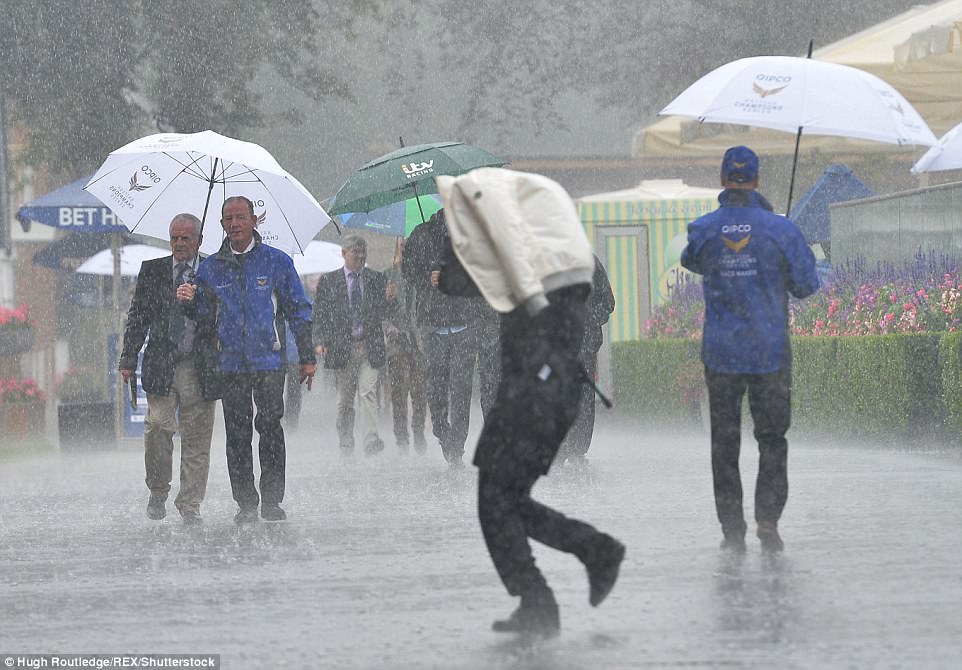 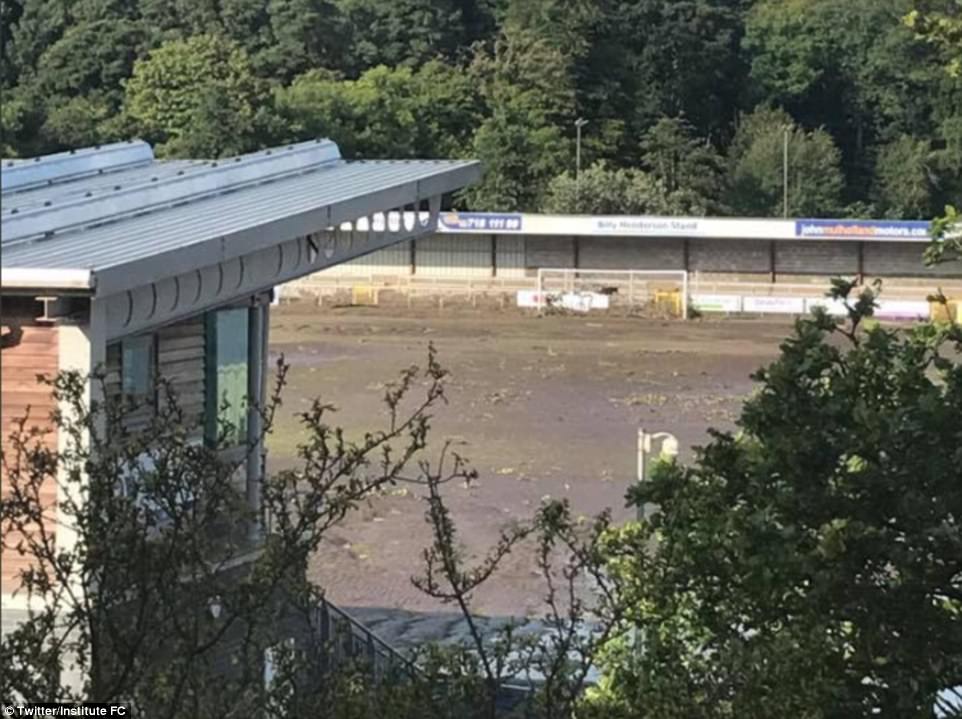 Institute Football Club, who play in the NIFL Championship, were devastated after their Riverside Stadium was flooded today 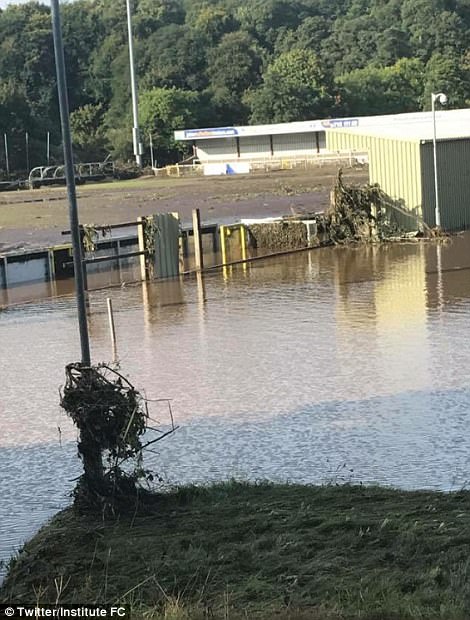 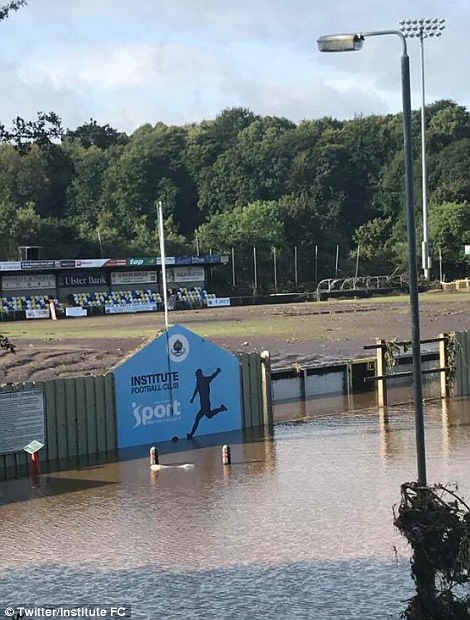 A family walk along Saltburn Beach in East Cleveland in the rain today, determined to make the most of the summer holidays 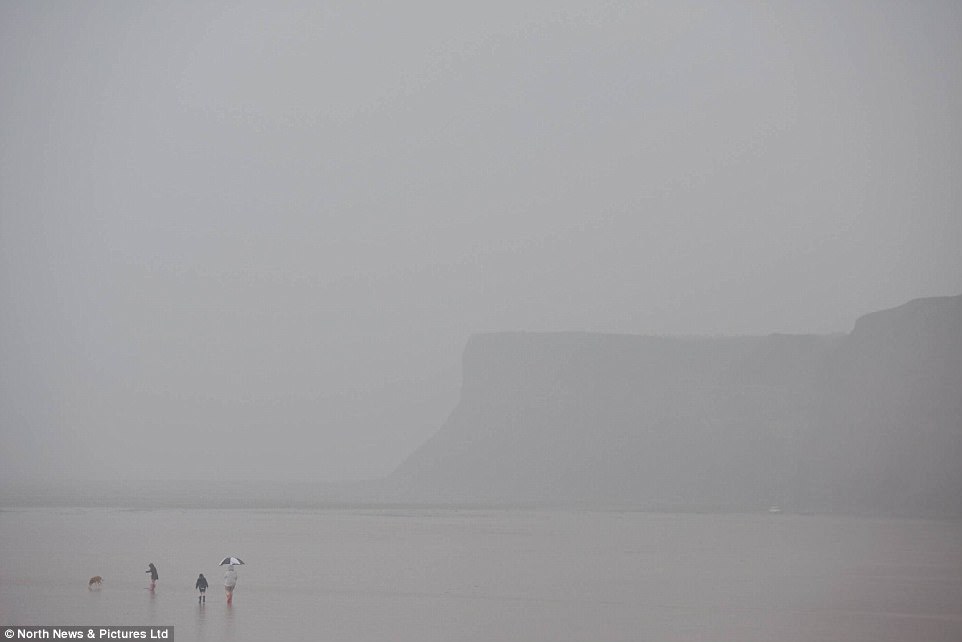 The family did not need any medical treatment. Meanwhile on the isle of Barra a man was rescued from his house just outside Castlebay after it flooded. The Coastguard, fire service, police and ambulance were also at the scene.

Elsewhere, fire crews were also called to deal with flooding in the water treatment station at Balivanich on Benbecula early today and were still at the scene at 7am.

A Met Office weather warning valid until 9am today said: ‘Some intense downpours, perhaps thundery, will lead to localised flooding of roads. Some travel disruption should be expected through into the morning commute.’

Hopes of the highest temperatures since mid-July did not materialise yesterday as cloud cover across much of the UK ensured the mercury only reached its highest since August 17, when it was 78F (25.4C) in Cavendish, Suffolk.

Forecaster Rachael Adshead said this was caused by the lack of prolonged sunny spells, even though it was humid and warm. She said: ‘For most people, temperatures have not been dramatic

‘There’s just been a bit more cloud around than we were expecting. Nowhere has seen the sunshine for long enough. We needed somewhere to see the sun for a long time and it just did not happen.’

Excellent early summer weather left many believing their crops would bring record returns for them this year, but rain has now stopped them harvesting them.

Wheat and barley farmer Nick Rowsell, who runs West Stoke Farm in Winchester, Hampshire, revealed what is left of his crops is almost certainly useless for anything but animal feed now.

Mr Rowsell said he is just two thirds of the way through harvesting the 400 acres of land he owns. He said: ‘Like all farmers, I was full of optimism for an excellent yield this year after the really good weather we had early in the summer.

‘But this season has ended up being very stop-start for us – in the last 45 days, which is when we would be harvesting – we have had just 14 dry days. Then on the dry days you have to ensure the crops are dry enough themselves to be harvested.

‘We are only two thirds of the way through our harvest here, which causes problems for the quality of the wheat and barley. The longer it goes unharvested the more the quality reduces and it gets to the point where it can only be used for animal feed.’

Mr Rowsell said it had been suggested to him that he should start his harvest earlier to avoid the issue, but he said that is just not possible.

‘Sadly, the crops do not allow us to start early each year and avoid this problem. The crops come ripe when they come ripe – and to harvest them too early would also leave us with poor quality wheat.

‘It’s not just here at West Stoke that we have had this problem; it’s the same across the South and South West. The poor quality crops mean we have to import more bread – I mean, most of what we have here will be useless for making bread now.

‘And with Brexit having already knocked prices up, the price of bread will most likely become more expensive. The bad weather also hits our income, which we need to re-invest in the crops ahead of next year.’

Mr Rowsell, who runs West Stoke Farm with his father John, said they can earn upwards of £160 per tonne of wheat used to produce bread. But they will only receive £114 per tonne if it is used for animal feed.

National Farmers’ Union south-east adviser Sandra Nichols said the wet weather was a serious problem for farmers. She said: ‘It has not been good for farmers in recent weeks.

‘After a very dry July, the harvest got off to a reasonable start, but time is getting on now and those crops still in the field will be losing their quality. It’s very serious now for farmers across the south of England.

‘There may well be an impact on shoppers because of this – hopefully not too much but that is a risk.’