It’s been a long, cold winter for Britain – and the end is still not in sight for at least another month, forecasters say.

Despite the start of British Summertime on Sunday, temperatures are expected to remain below average for the time of year for the next four weeks, with overnight frosts and even snow expected this Easter weekend.

But looking ahead there are signs of an improvement towards the end of April with drier weather and rising temperatures, with forecasters expecting ‘an increasing number of milder days’.

And research titled the ‘Pimms Summer Forecast’ has suggested that more good news should be on the way soon after, with analysis of decades of sunshine and rainfall data revealing May as the best time of year to be outside.

The study revealed by forecaster Weatherquest for drinks company Pimms showed May is also the driest month, with an average rainfall of 54mm over Britain, compared with 58mm in July, 60mm in June, and 67mm in August.

A Met Office spokesman told MailOnline: ‘During May we are looking at an average of between 186 and 195 hours of sunshine for May, depending on where you live, although that is not a guarantee of high temperatures.

‘It is still too early to be able to say what the summer will look like. At the beginning of April the weather is looking quite changeable, with longer periods of rain and temperatures on the cold side, especially in the north.

‘But as we go through the month it will become dryer, and although that means frost and fog in some parts, it should also mean rising temperatures which look like they will be above average for the end of the month.’

Winds from Scandinavia, the same source as the two Beasts from the East which have caused major travel disruption across Britain over the past month, will sweep across the country in the run-up to Easter. 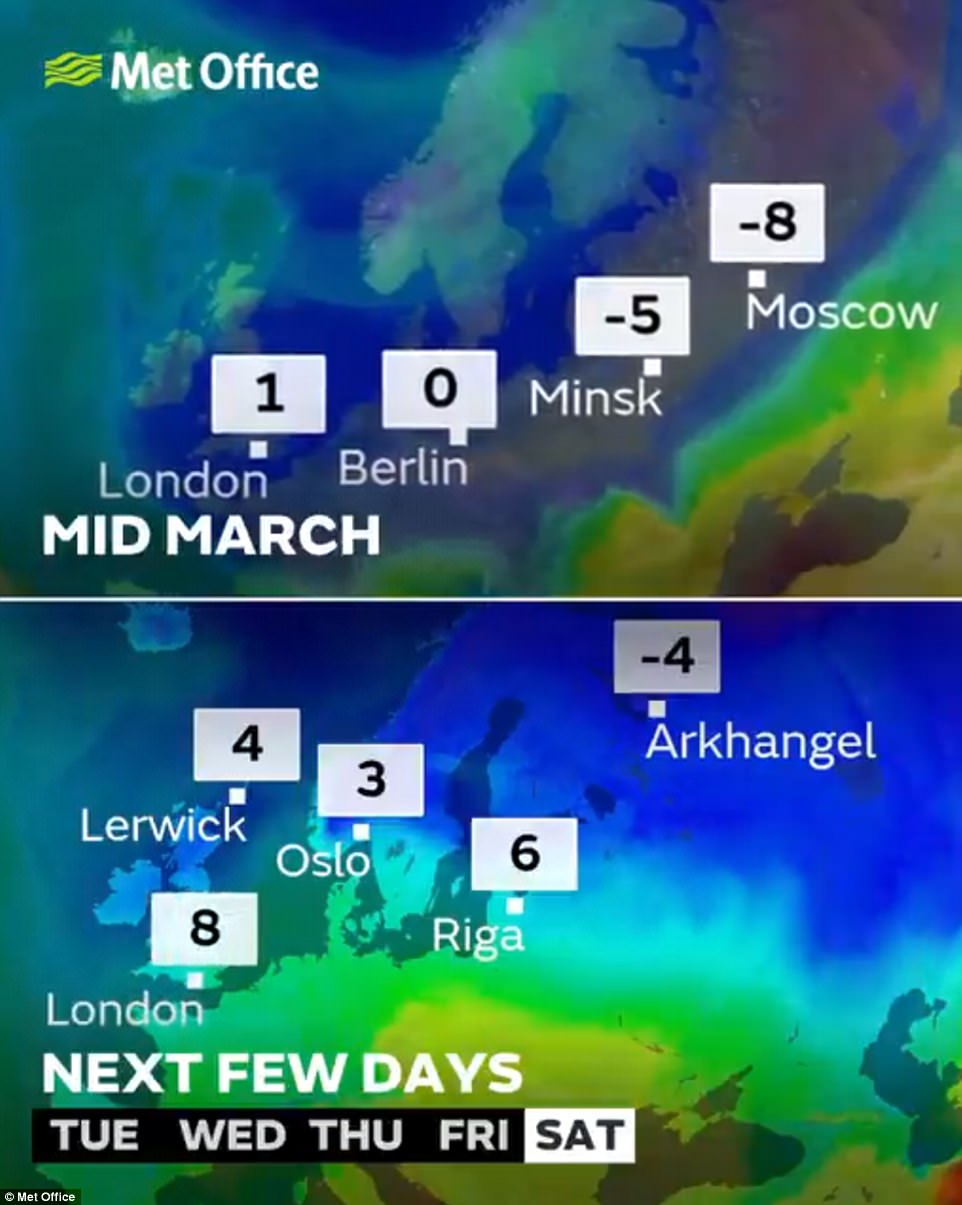 The spectre of widely disruptive snow at Easter has been lifted for most of Britain, but there will still be sub-zero temperatures – and snow falling in areas above 1,000ft as well as Aberdeen and the North East of Scotland.

Heading into next week it will remain cold with ‘a risk of snow for all areas, although this is most likely over northern high ground’, the Met Office said. The driest and sunniest periods are expected in the North West.

Elsewhere unsettled weather will persist for central and southern parts of the UK, and it will be windy at times with overnight frosts likely. Towards the second week of April there will still be overnight frosts and patchy fog.

Settled, slow-moving conditions are likely to be more dominant by mid-April with overnight frosts and patchy fog, with forecasters then expecting changeable or showery spells interspersed with drier and more settled periods.

The Met Office said temperatures ‘overall are likely to remain below average although an increasing number of milder days can still be expected’, adding that overnight frosts are still possible but more restricted to the North.