The summer holidays in Britain have so far been characterised by heavy rain and strong winds which have left beaches deserted and holidaymakers raiding the cupboard for board games.

But an improvement is on the way for the final few weeks before the schools go back, starting with a balmy bank holiday weekend that will see temperatures soar towards 80F (27C) on Saturday.

Conditions are also expected to be mostly pleasant for this week, after some thundery showers for some areas today – with the mercury rising gradually each day as the weekend draws nearer. 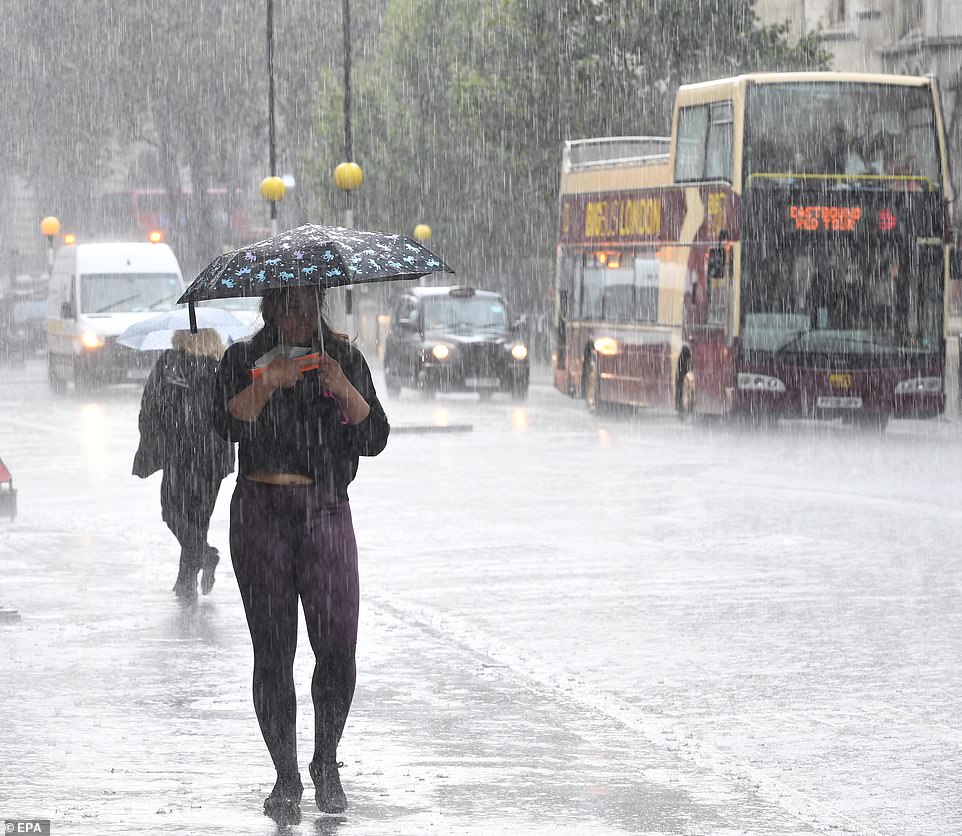 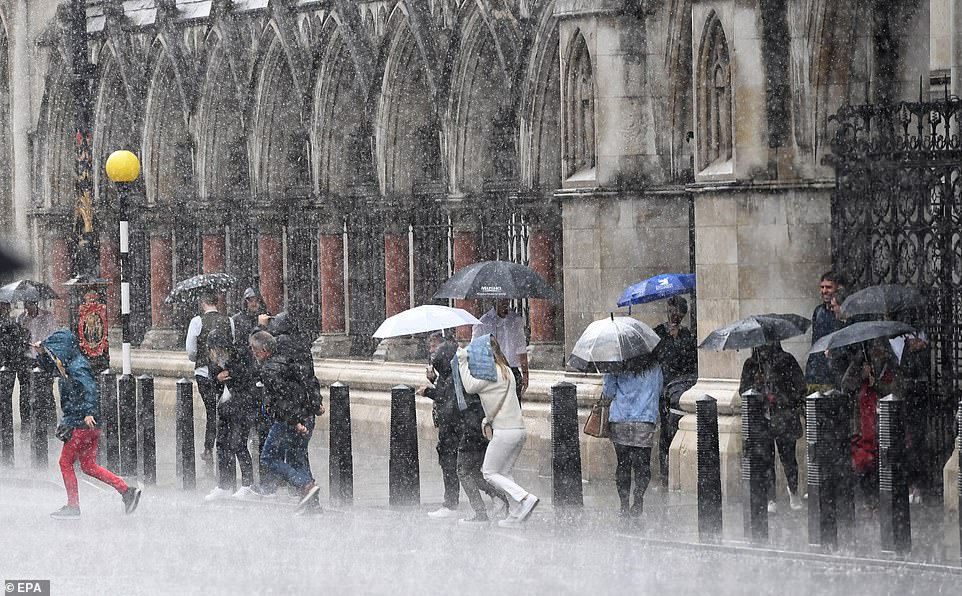 Met Office forecaster Craig Snell predicted ‘something a little more summer-like’ for the first half of the bank holiday weekend, with temperatures getting up to 25C (77F) in the South East by Friday.

However, he warned that the forecast for Sunday and Monday was less certain. ‘The week ahead will see a north-south split develop across the UK, Mr Snell said. ‘But gradually the South will turn drier and sunnier.

‘Temperatures are still struggling for this time of year, at best reaching 23C (73F) in the South East. Factoring in the breeze it will feel cool for mid-August. The Bank Holiday weekend will be warmer, but still cooler than it should be.’

Northern and western regions will today see showers and longer spells of rain, some locally heavy and thundery – although it will be drier and brighter in the South with sunny spells despite a few showers in the South West.

Tonight will bring showers for much of southern Scotland and the far north of England. Elsewhere, any daytime showers should largely fade to leave a dry and largely clear night with a gentle south-westerly breeze. 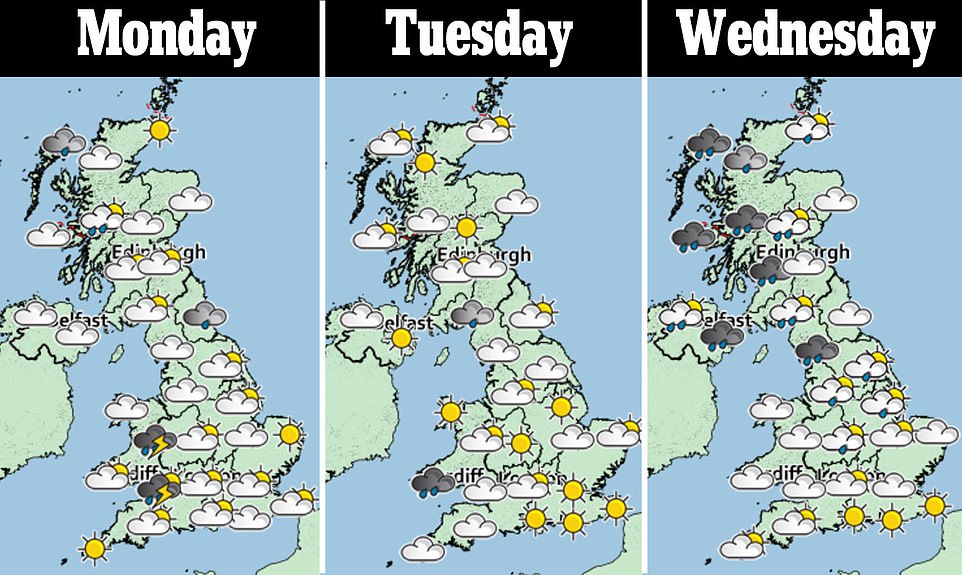 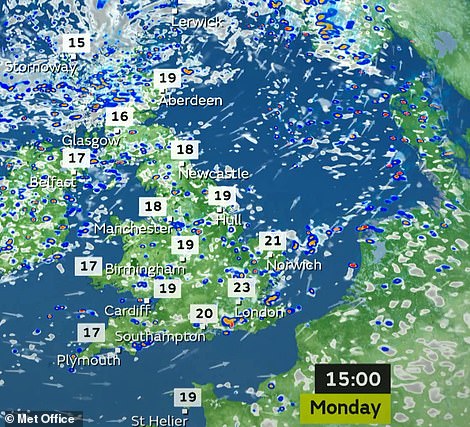 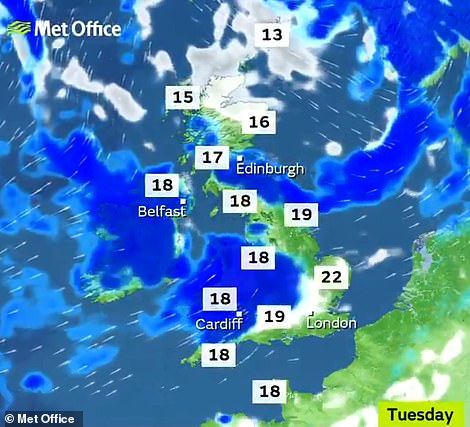 Northern and western regions will see showers today (left), while there may be some rain in the West tomorrow (right) 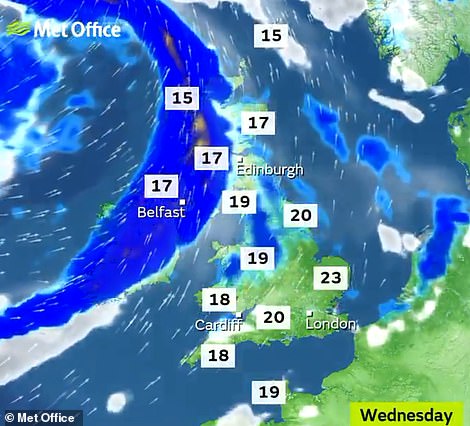 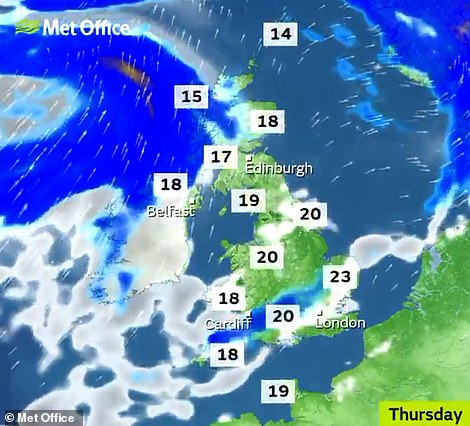 It will be fine and dry for many through most of Wednesday (left), while Thursday will see a mix of clear spells and rain (right)

Sunny spells will feature tomorrow for most areas, although there will be a risk of a few showers in the West which may merge into longer spells of rain across Northern Ireland and later western Scotland and North West England.

It will be fine and dry for many through most of Wednesday, though heavy rain crossing Northern Ireland from the West during the morning will spread east to other northern and western areas later.

The warm weather is being brought in by a tropical typhoon developing over Asia. Storm Krosa is spinning over the Pacific Ocean and will soon hit the jet stream over Japan, bringing high pressure across Asia and then Europe.

The top temperatures over the weekend were 75.4F (24.1C) at London Heathrow Airport on Saturday, before 72.3F (22.6C) at Holbeach in Lincolnshire yesterday. The low was 45.7F (7.6C) at Balmoral in Aberdeenshire.