The summer is about to return for a brief spell in Britain with temperatures of up to 82F (28C) this – making the country hotter than Mexico.

The 1,000 mile-wide Hurricane Gert is bringing Caribbean air to the south of England and Wales, but Scotland and the north east could face floods, with heavy rain forecast.

The Met Office said Gert, the second Atlantic hurricane of the season, hit the north today as part of another Atlantic low pressure system.

Hurricane Gert is shown dragging hot air (in orange and red) to Britain on Tuesday. Britain will be hotter than Greece as the South has a 29C (84F) sizzle 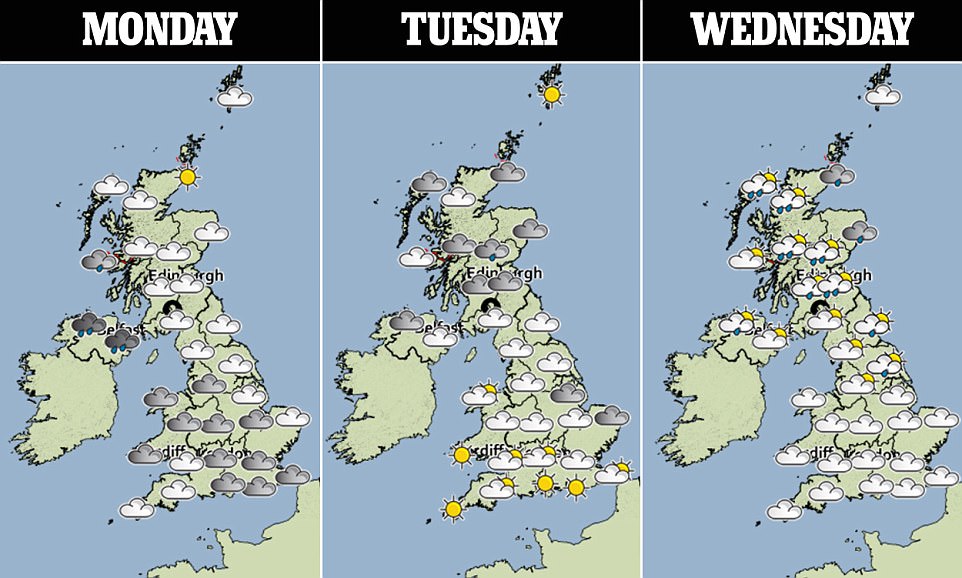 Government weathermen said the ex-tropical storm was bringing up to an inch of rain to Wales, Scotland and Northern Ireland into tomorrow, with up to half an inch in northern England on Tuesday.

Around 1.5ins of rain in Scotland – half a month’s worth – and 2.3ins in Ireland was forecast by The Weather Company.

The Environment Agency warned of flooded homes and roads in northern England and north Wales.

The Met Office said tropical air in Gert – which passed just east of the Caribbean – would help highs leap from 73F (23C) tomorrow to up to 82F (28C) on Tuesday in the south.

It comes after Britain has been anchored below 79F (26C) for a whole month – covering what is usually the hottest month of the year.

South-east and central southern England had their coldest August 1-13 for 30 years, since 1987, the Met Office said. But the Met Office forecast a cool-down from Thursday. 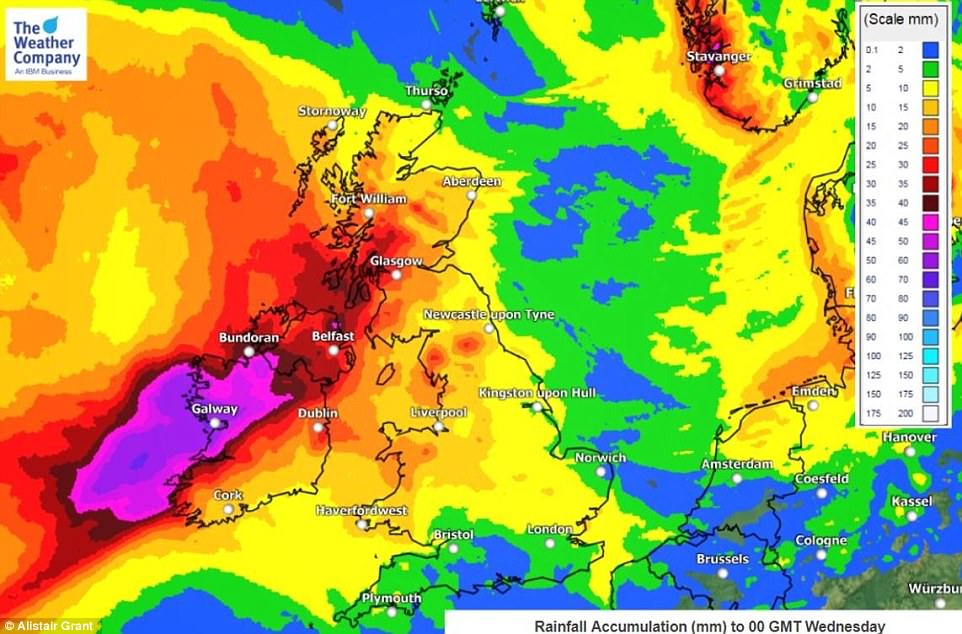 Hurricane Gert’s deluges by Tuesday evening are shown in this grpahic. The Met Office said that the north faces localised flooding this week

Government forecasters said the Bank Holiday weekend would ‘not be a complete write-off’ – but forecast spells of rain, average 16-21C temperatures and gales in the North.

Met Office forecaster Chris Page said: ‘Tropical air is arriving with the remnants of ex-Hurricane Gert, which is part of an Atlantic low pressure area.

‘There will be increasing sunshine for the South with 27-28C most likely and 29C a lower chance.

‘But heavier pulses of rain were also expected in the West and North. Drivers should take care with extra spray on roads. 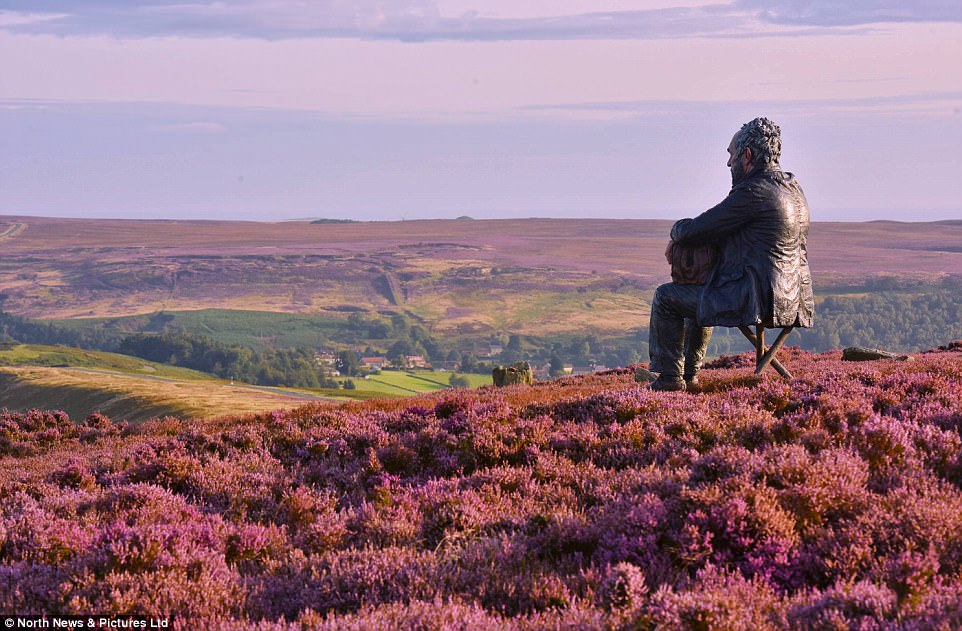 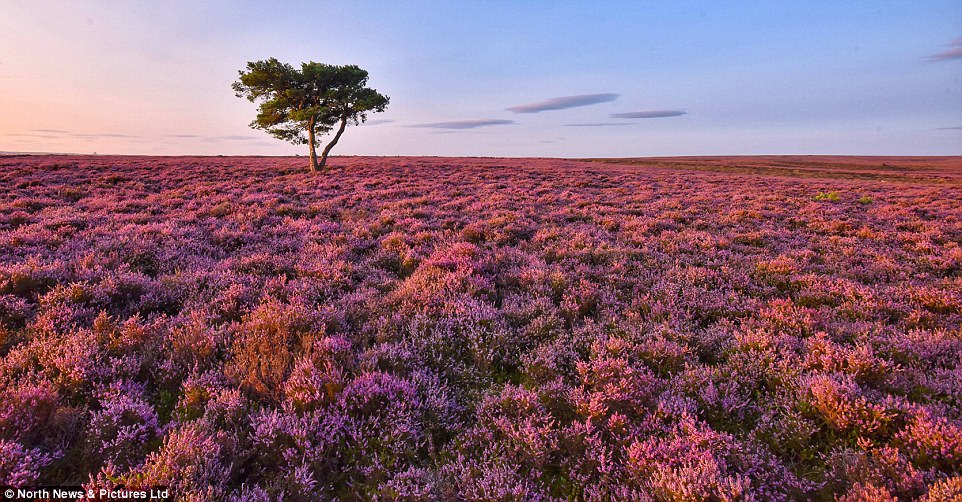 Miles upon miles of moorland have turned into a magnificent carpet of pink and purple heather in bloom across the North York Moors in North Yorkshire this morning, with the rising sun accentuating the most extensive display found in England

‘And it’s unsettled from Wednesday with low pressure in charge. The Bank Holiday weekend is not a complete write-off – but there is an increasing chance of unsettled weather. People should stay up to date with the forecast.

‘There is the chance of gales in the north, with temperatures around average.’

The Environment Agency said: ‘Local flooding is possible from rivers and surface water in north Wales and northern England on Sunday, Monday, Tuesday and into Wednesday. Land, roads and some properties may flood and there may be travel disruption.’

The Weather Outlook forecaster Brian Gaze said: ‘The Bank Holiday weekend shows a decreasing chance of dry and settled conditions. All regions could have showers or longer spells of rain.’