Summer’s over! Temperatures plunge by 30F in just 12 hours as heatwave is replaced by an inch of rain and 35mph winds

A weather front will cross the country today, with longer spells of rain in the North and showers possible in the South. Temperatures are set to reach maximums of just 70F (21C) in northern England and 75F (24C) in the South.

It comes after temperatures in Britain got above 91F (33C) for the third day in a row yesterday, before thundery downpours brought a return to cooler and fresher weather – and it was 64F (18C) in the same areas this morning.

Winds gusting at up to 35mph are expected on the coasts of North Wales and South West England this morning, although speeds are unlikely to get much above 10mph in the South East. 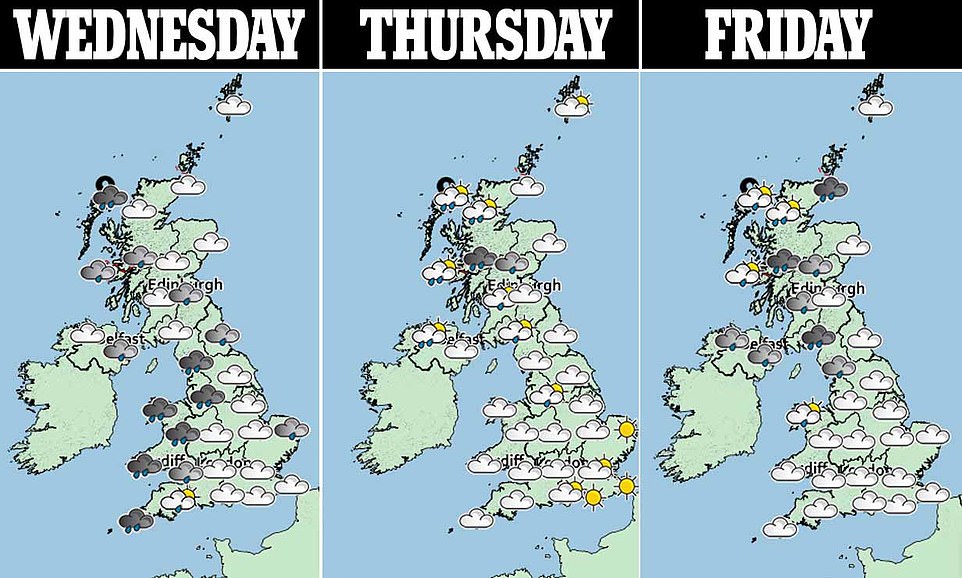 A ridge of high pressure will bring sunnier conditions for many areas of England and Wales tomorrow and on Friday but conditions are set to be breezy, with showers expected in northern and western areas on both days.

The Met Office issued a warning for heavy and persistent rain to affect South West Scotland through Friday afternoon and into Saturday morning, with up to 4in (100mm) possible over the hills of Dumfries and Galloway.

Highs of between 91.8F (33.2C) and 92.1F (33.4C) have been recorded on each of the past three days at London Heathrow, although temperatures plunged overnight and into this morning as showers moved from west to east.

Met Office spokesman Mark Wilson said: ‘Again, we had very warm temperatures in south east England but showers moved in through the day, starting in the South West and moving north and east.’

Mr Wilson said temperatures would fall significantly as ‘cooler, fresher’ air moved in following the thundery showers. It comes after a weekend heatwave saw beaches and parks packed as people enjoyed the sunshine. 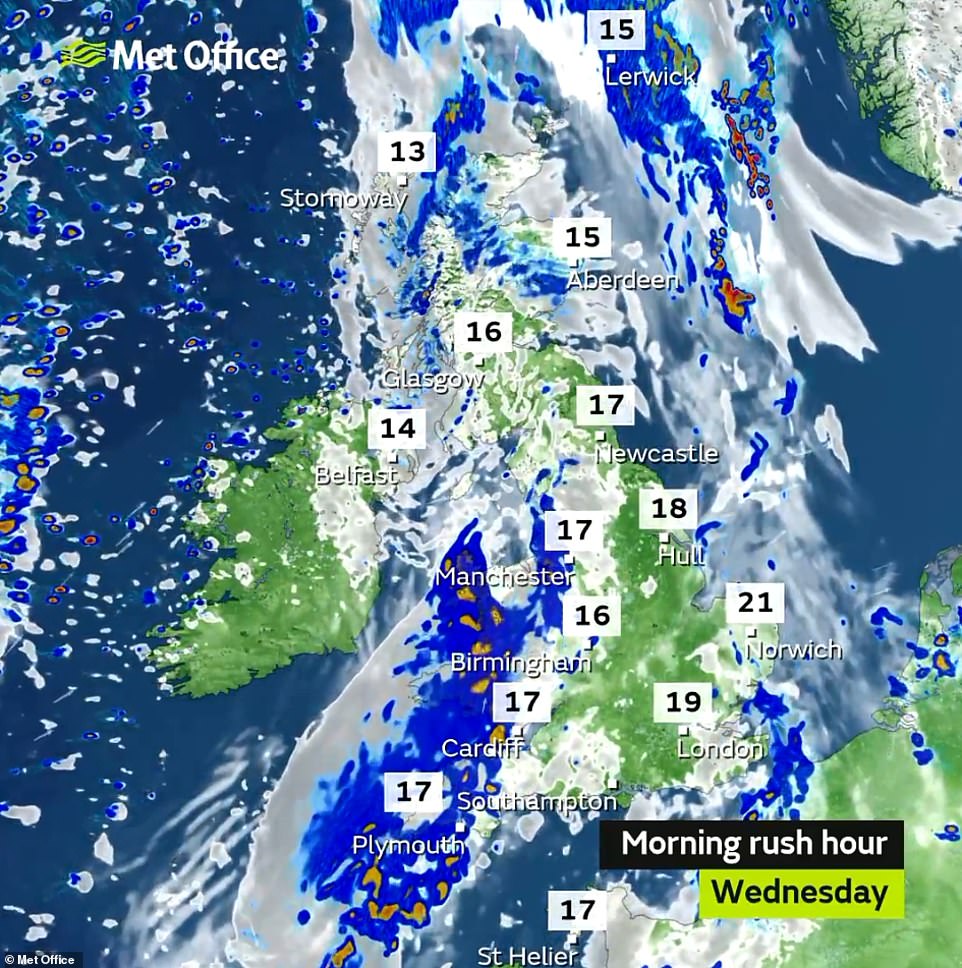 Rain is forecast across Wales and the South West of England this morning, with temperatures feeling much cooler today 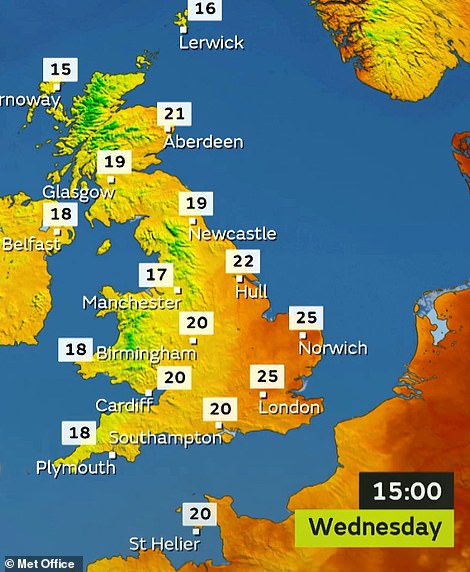 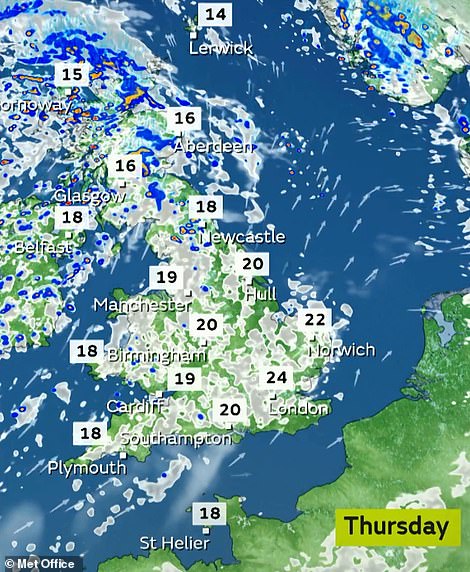 Conditions will be much fresher today compared to the last few days, while tomorrow will be similar but slightly cooler again 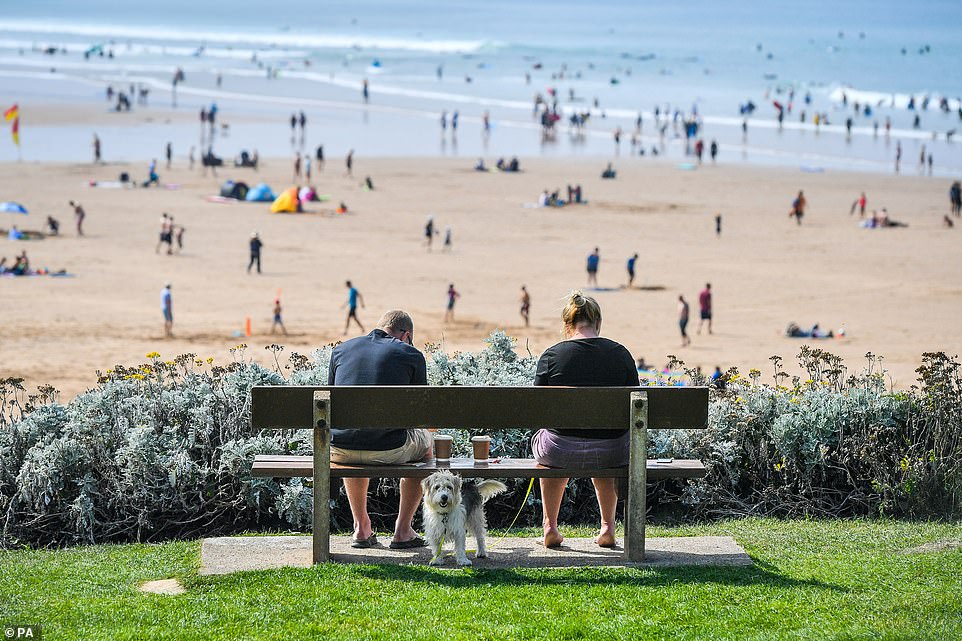 Records were broken for the hottest ever August Bank Holiday weekend – with 91.9F (33.3C) recorded on Sunday – and the warmest Monday of the break at 91.8F (33.2C). Both temperatures were recorded at Heathrow Airport.

Yesterday’s conditions saw the Met Office issue a thunderstorm warning for eastern England, with up to 2.4in (60mm) of rain expected to fall. The wettest place yesterday was the Isle of Tiree which saw 1in (25mm) of rain.

The forecast comes as a survey found Britons have lost hundreds of pounds this summer after having plans cancelled due to this summer’s unpredictable weather.

After the hottest UK temperatures since records began (101.7F/38.7C) was recorded at Cambridge Botanic Garden on July 25, torrential rain brought flash flooding at the end of the month and beginning of August.