Britain faces a third storm in just four days today as the country braces for a week’s worth of rain and 60mph winds following a week of weather chaos.

A third low pressure system this week will hit the West of the UK this morning before spreading across to eastern areas by the early evening, following 121mph Storm Brendan on Monday and a second 78mph storm on Tuesday.

Up to an inch of rain (25mm) is expected today – just over a week’s worth for the time of year – along with gales across the UK with winds as high as 35mph for many, while coastal areas and western England will have 60mph. 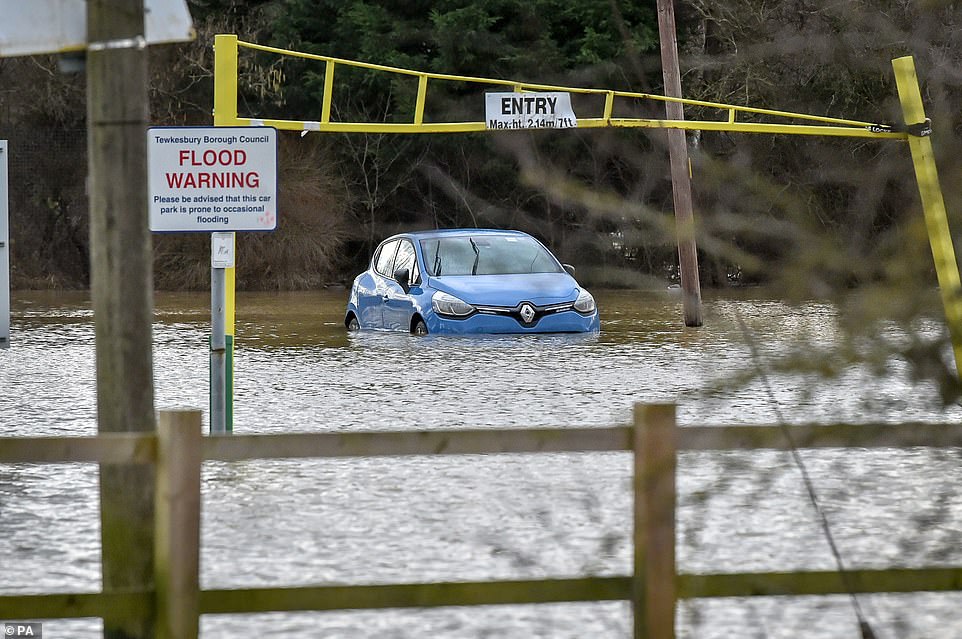 Pictured: A stranded car inn floodwater in Tewkesbury, Gloucestershire, after storms and heavy rain across the UK as a week’s worth of rain sweeps in 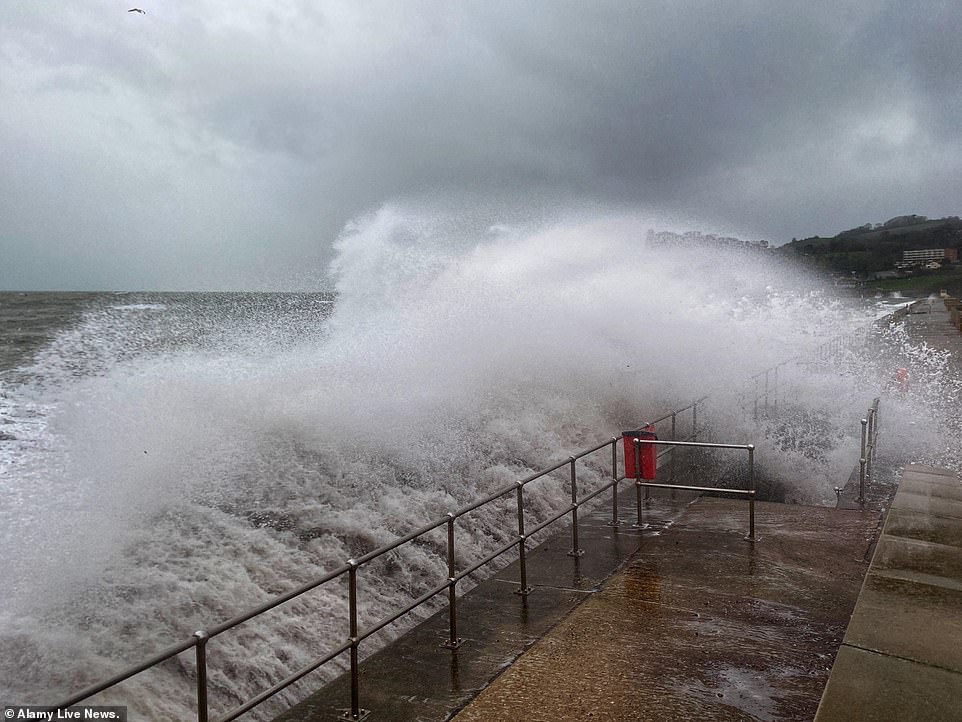 Pictured: Huge waves in Devon today as wet weather and 60mph winds batter the country after a week of adverse weather 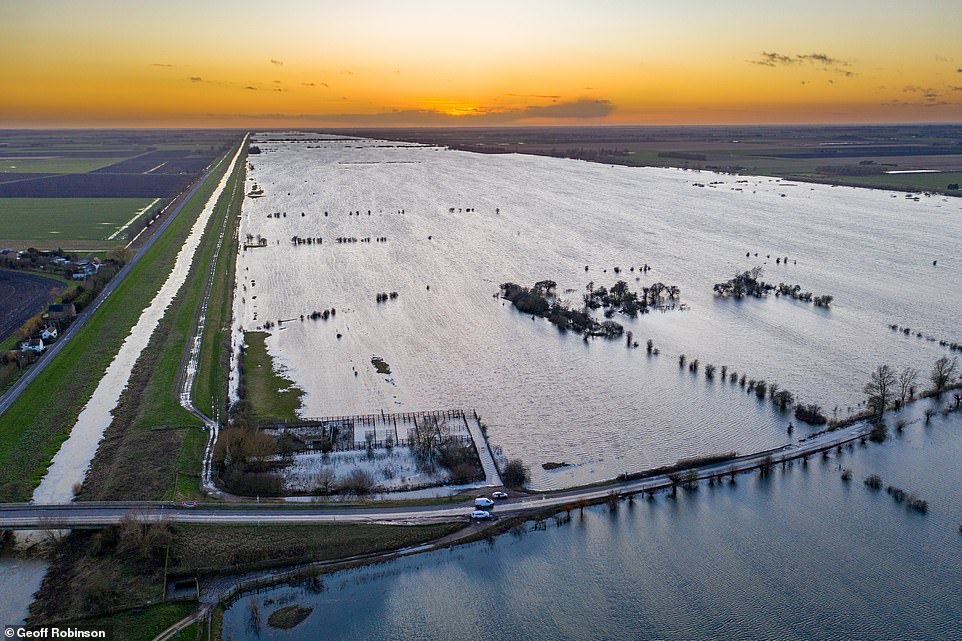 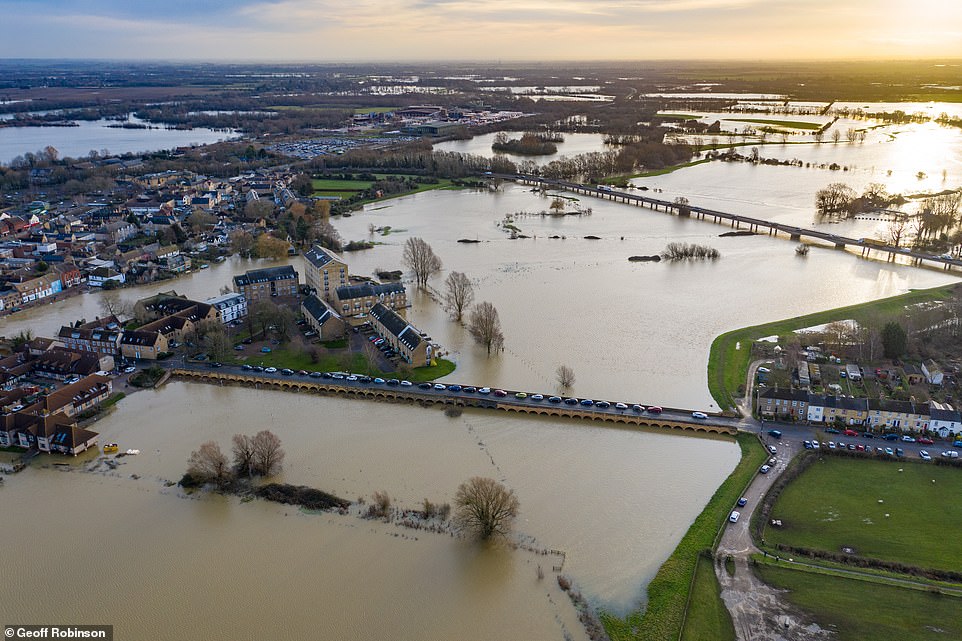 Pictured: The town of St Ives in Cambridgeshire on Thursday morning surrounded by flood water after the River Great Ouse burst its banks after Storm Brendan brought heavy rainfall 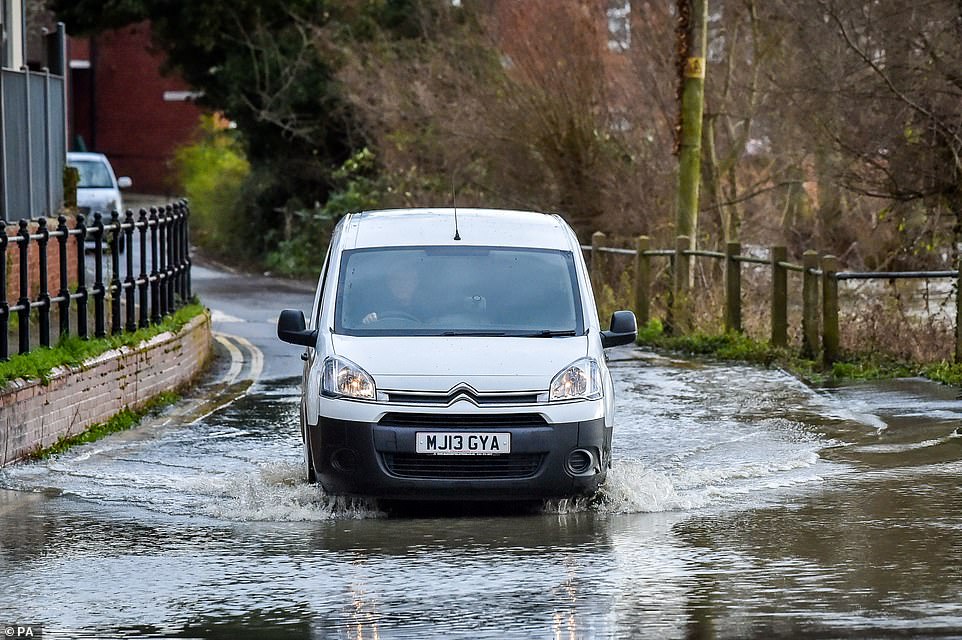 Pictured: A van drives through floodwater in Tewkesbury, Gloucestershire, as wet weather sweeps across the UK this week 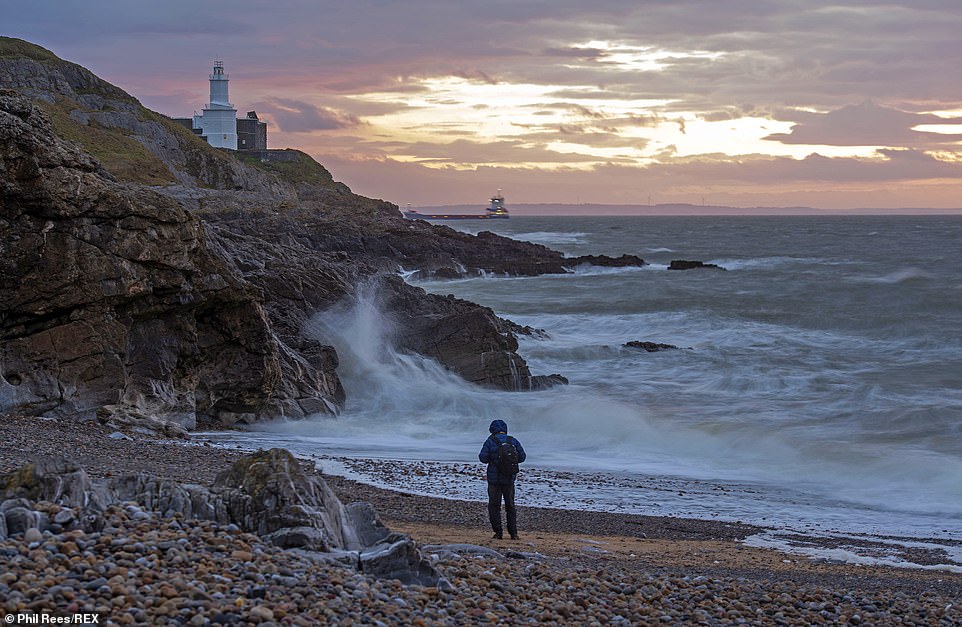 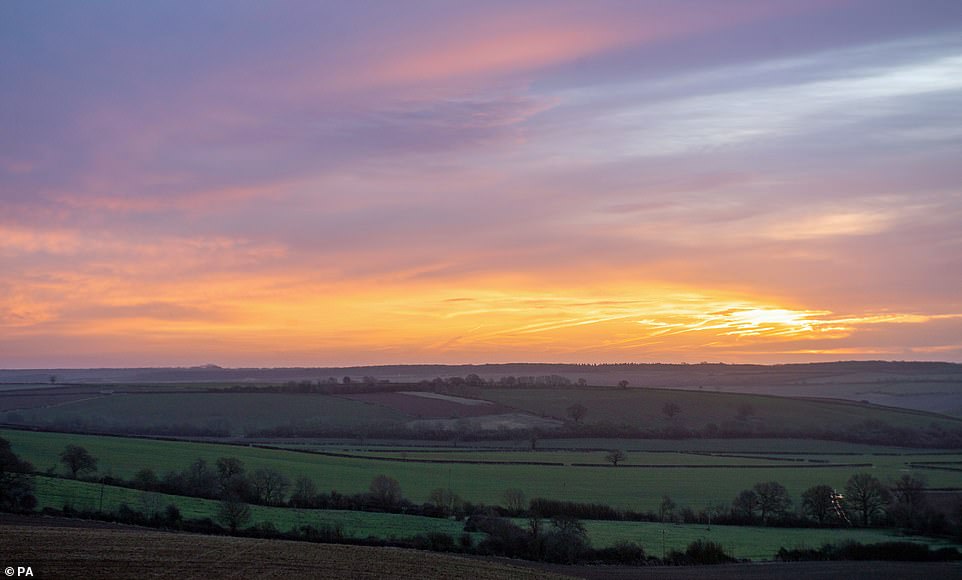 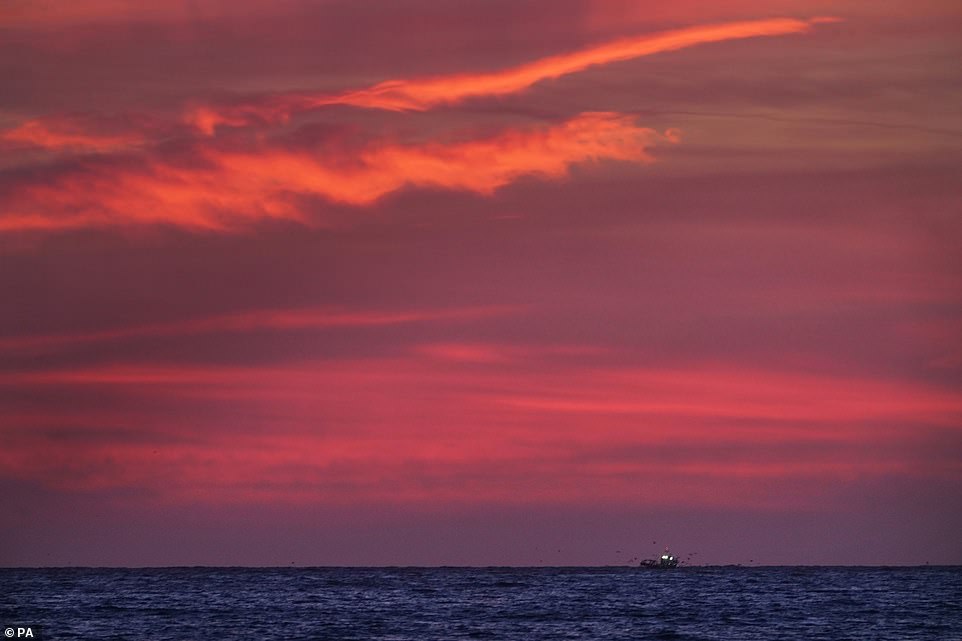 Met Office meteorologist Luke Miall told how the rain today will spread from the West to the East – but tomorrow will be better, with some sunshine and showers before cold but clear weather moves in over the weekend.

He said: ‘We have another low pressure storm coming in bringing strong winds and heavy rain. Rain is likely to be heaviest in the west of the country at first and get across to the east of England by early evening.

‘We are looking at gales across the UK with winds as high as 35mph for many, while coastal areas and the west of England seeing as high as 60mph. 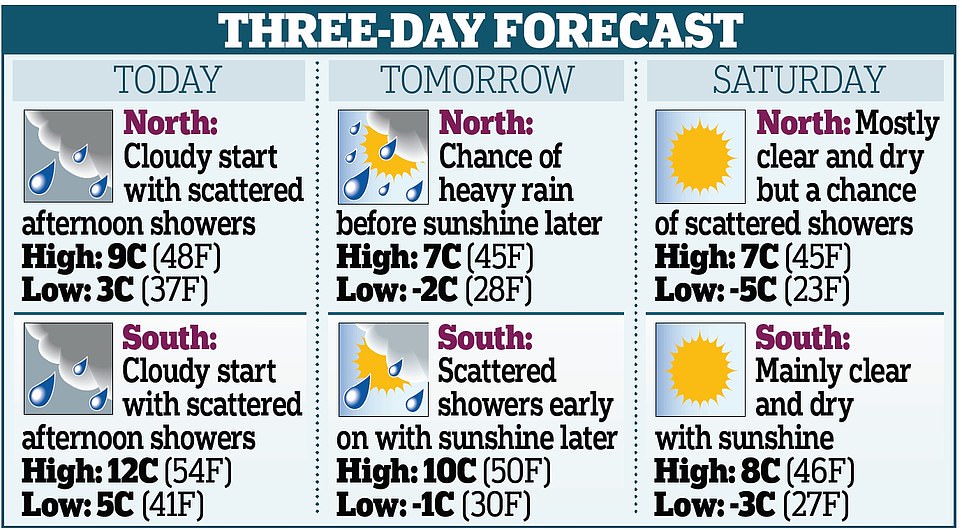 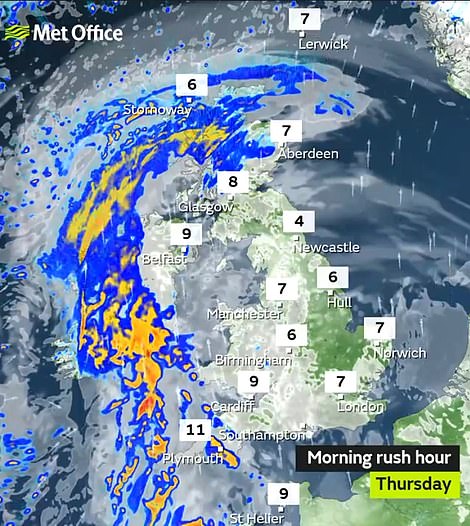 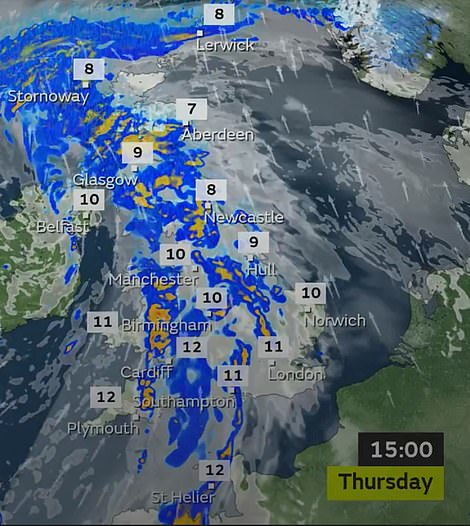 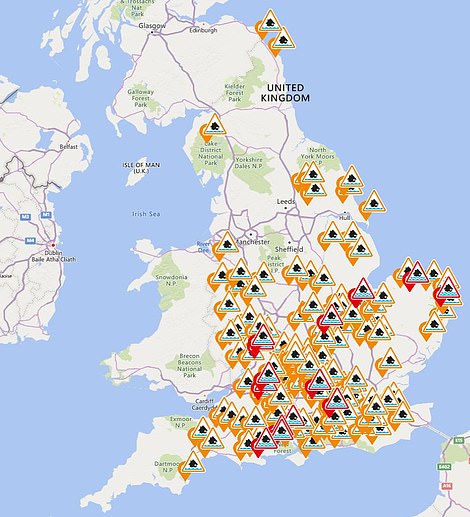 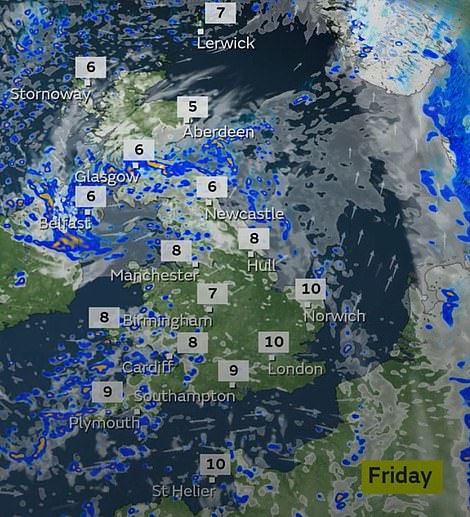 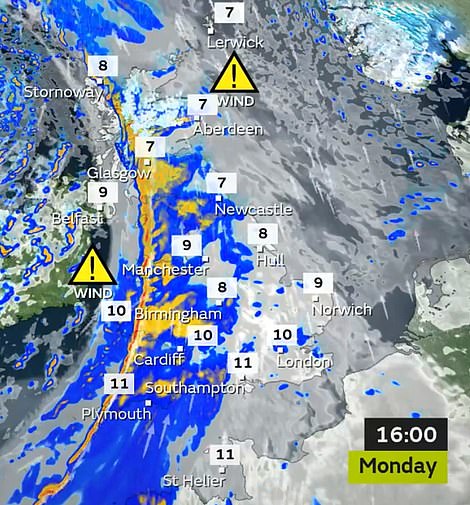 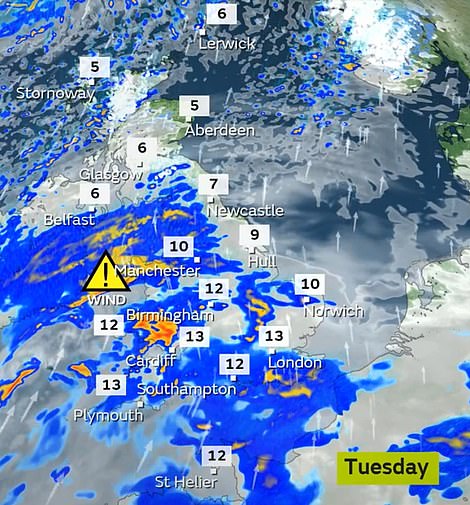 ‘In terms of rain, we will see up to an inch of rain, although the ground is already wet so there could be minor impacts from that. Once that clears though, tomorrow will be better with sunshine and showers.

‘Going into the weekend there is a big area of high pressure, so most places in the country will see a nice day but also some frost, which we haven’t seen so far this winter. It will be mostly sunny skies although cold and clear.’

Flooding in recent days has added to the country’s woes amid a clean-up operation following Storm Brendan, which rattled the UK with winds of up to 121mph in the Cairngorms in the Scottish Highlands earlier this week.

The South Coast has seen tides so high that car parks were flooded, and the River Avon burst its banks near Chippenham, Wiltshire. As much as 1.2in (30mm) of rain was recorded in Hampshire overnight on Tuesday night.