Homes were evacuated in Britain today due to severe flooding after torrential downpours and thunderstorms, which are set to continue with a further four inches of rain still on the way this week.

The Met Office has issued a swathe of weather warnings over the next two days for the country, amid fears homes and businesses could be flooded and there could again be difficult driving conditions and road closures.

The Environment Agency has issued 44 flood alerts for England, advising flooding was possible, and seven more serious flood warnings, which mean flooding is expected and immediate action is needed.

The worst of the flooding today was seen within the Wrexham, Flintshire and Denbighshire areas of North Wales, where homes were evacuated, roads were closed, trains were cancelled and a school was shut.

Conditions are expected to improve next week with highs of 75F (24C) in the South East, although the Met Office has warned showers are still possible, especially in the North West where they could be heavy and with thunder.

(From left) Ana Maria Mocahu, Denis Dana, five, and her mother Daniela Danda find themselves flooded with only sandbags stopping the worst of the water coming into their home at Mancot in Flintshire, North Wales, today after torrential rain 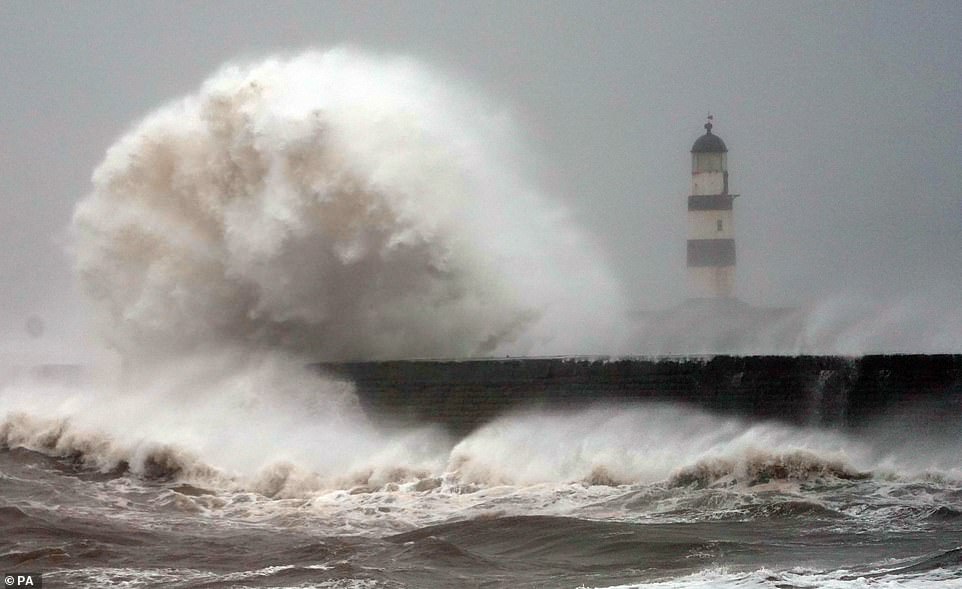 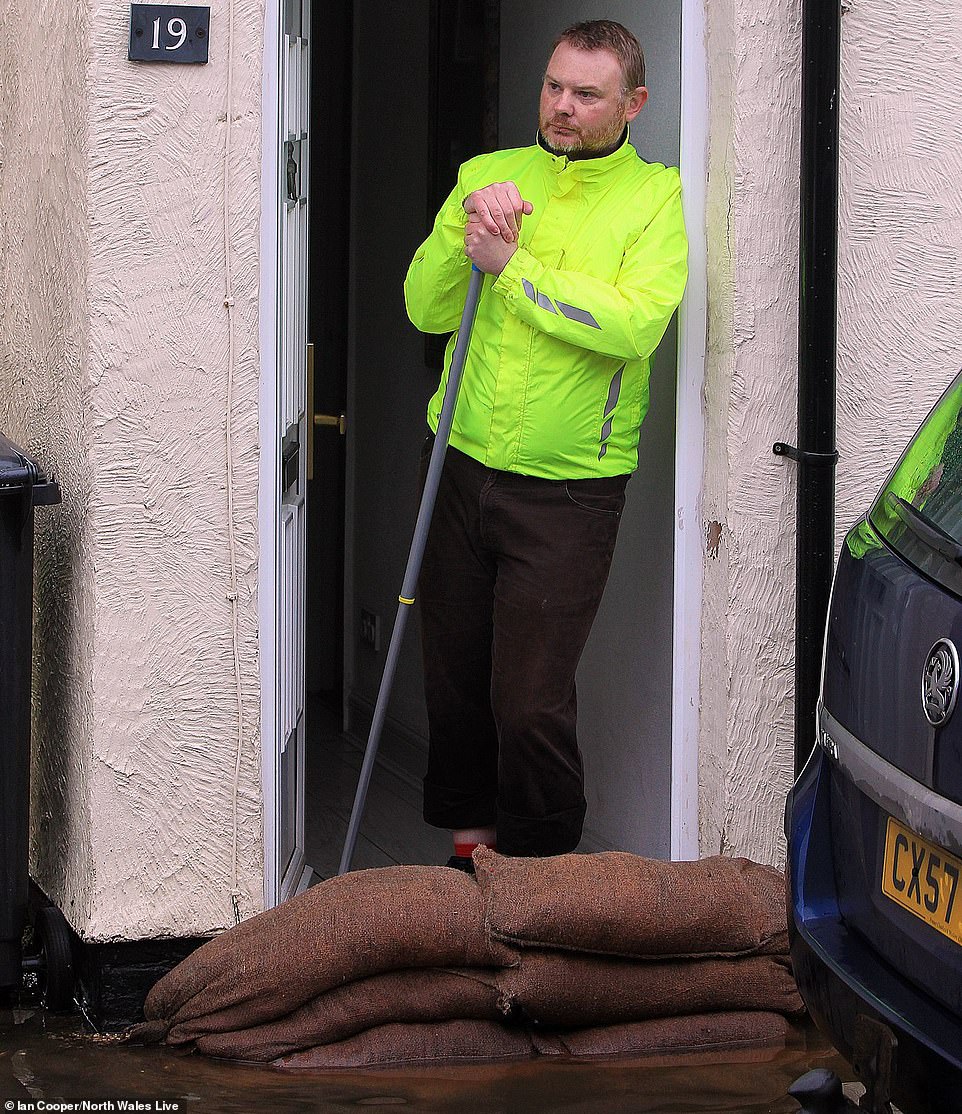 Stewart Crofts can only watch on as the water level rises outside his property in Mancot, Flintshire, today after heavy rain 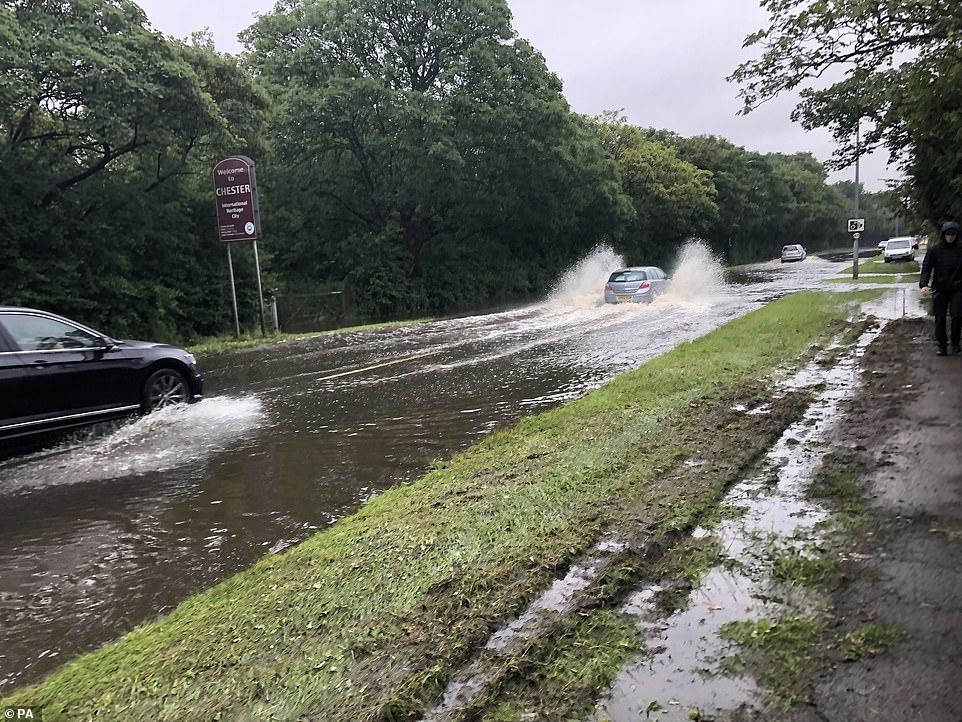 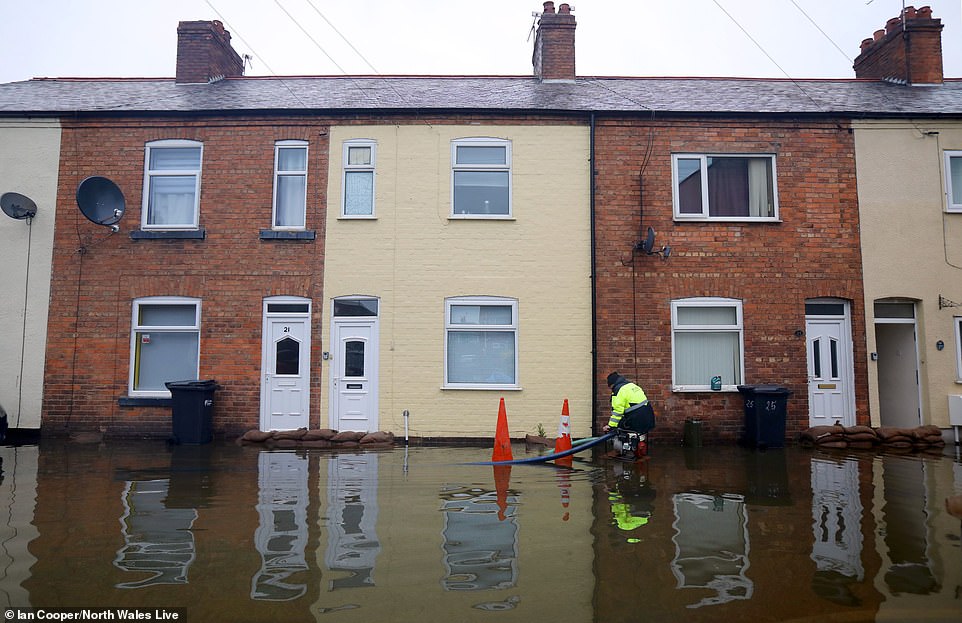 Drains in Mancot, Flintshire, are pumped out this morning as heavy rain causes flooding to multiple properties in North Wales 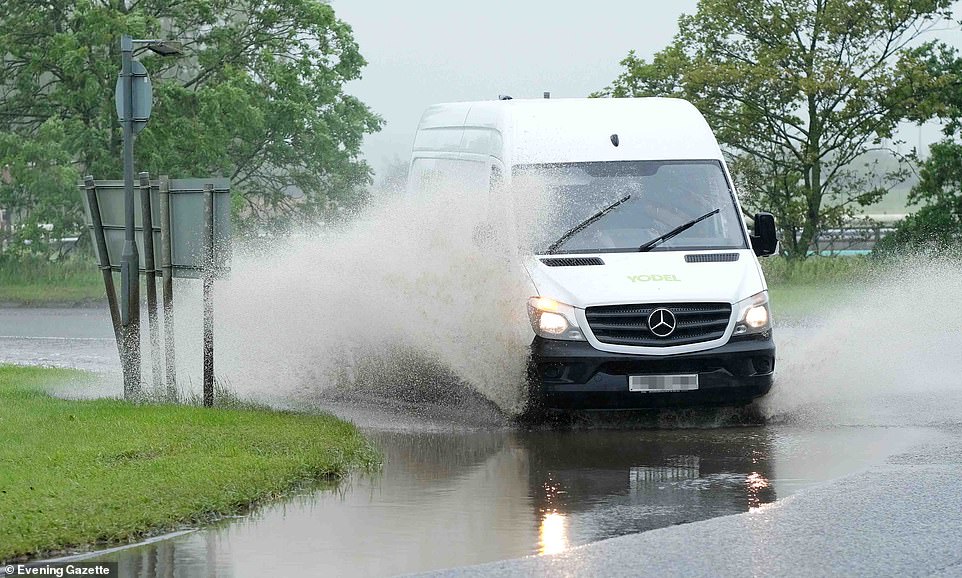 A van drives through a puddle this morning at Seal Sands in Teesside, which is expected to see the heaviest rainfall today 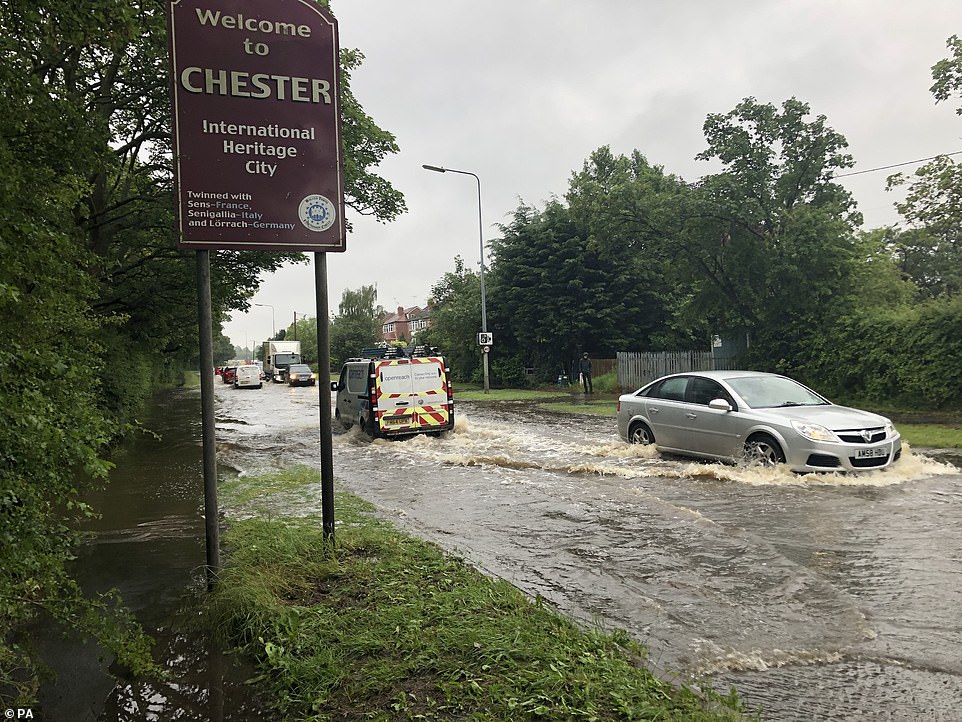 The supplier said it would make emergency bottled water available across affected parts of the W, TW and KT postcode areas if it was unable to fix the problem within a few hours. Three schools were closed due to the issue.

Firefighters were called to ‘severe flooding’ in Greenfield, Flintshire, while homes in Sandycroft and Mancot were flooded. Crews were also been pumping water away close to caravan park in Llangollen for more than 16 hours.

National Rail reported that heavy rain and flooding was affecting services in the North West and trains could be cancelled or delayed. Virgin Trains between Llandudno Junction and Crewe and Chester were among those hit. 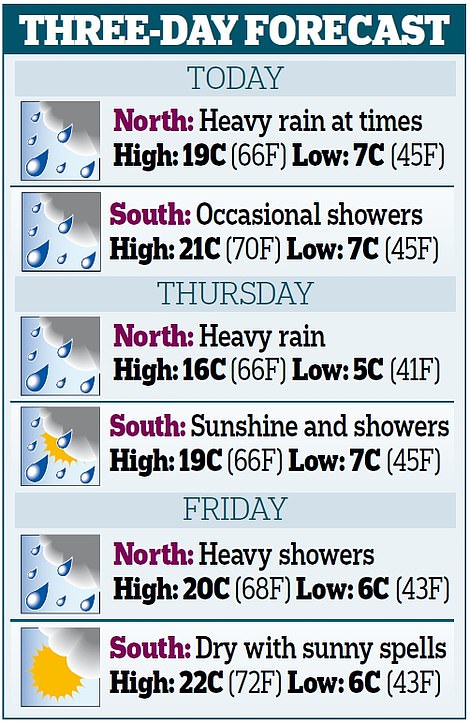 Other routes affected include the Merseyrail service between Hamilton Square and Ellesmere Port and Chester, as well as Transport for Wales services between Aberystwyth, Chester, Crewe and Shrewsbury.

North Wales Police tweeted about road closures in the area today, saying: ‘Good morning, weather and road conditions are atrocious. Please slow down wherever you may be going. Assess the need for your journey, drive to the conditions and your driving ability. Please do not ignore any road closure signs. Think Safety.’

South East England faces another 1.2in (30mm) to 1.6in (40mm) of rain in two to three hours today as thunderstorms break out along with torrential downpours this afternoon and evening.

Also today, there is a rain warning for the Midlands and North East. This week has seen heavy downpours and thunderstorms in the South East, with a persistent band of rain edging north and west as the week has gone on.

The heaviest downpours expected over the next two days are in parts of south-eastern Scotland near Edinburgh, where there is an amber warning amid fears up to 4in (100mm) of rain could fall tomorrow.

Some parts of the country have seen double the average monthly rainfall in June already this week, with Stenigot in Lincolnshire experiencing 122.8mm (4.8in) in 48 hours, and 4.1in (104mm) in just one day at Ham Hill in Kent.

Met Office meteorologist Bonnie Diamond said parts of the country could see up to 2in (50mm) to 3.2in (80mm) of rain falling on higher ground today, with the heaviest rainfall was expected to be in the Teesside area. 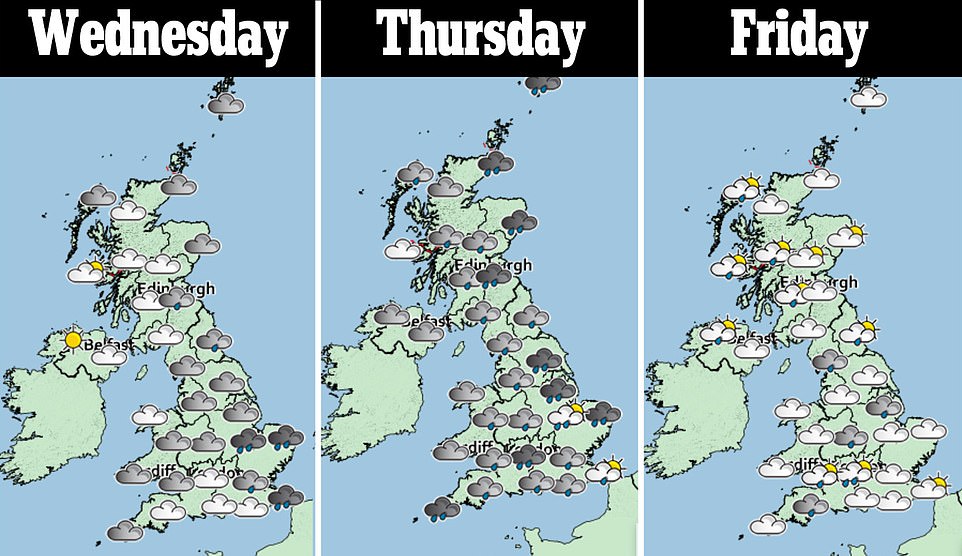 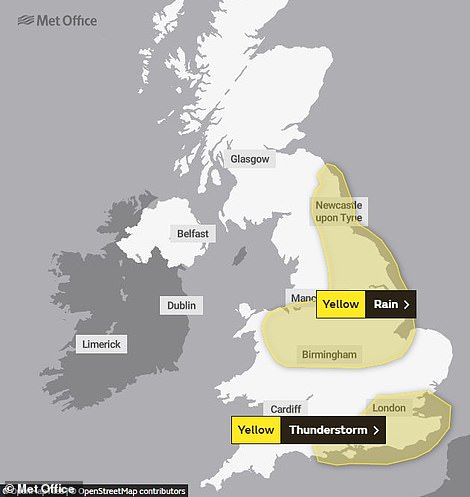 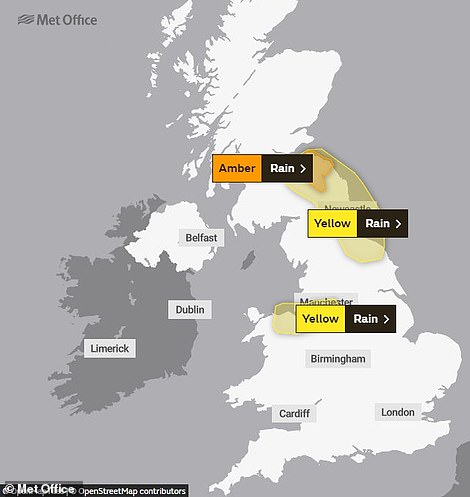 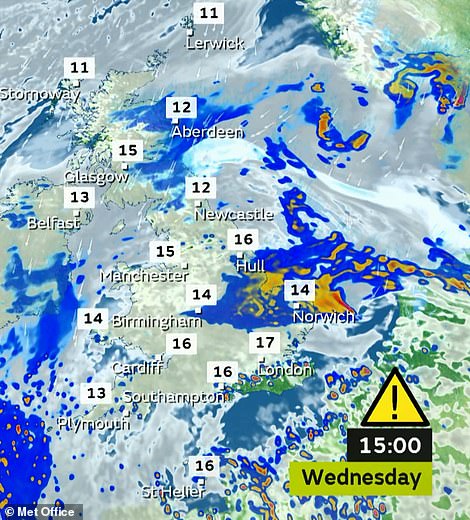 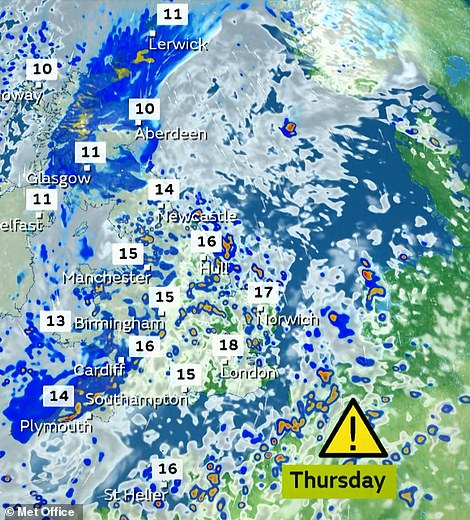 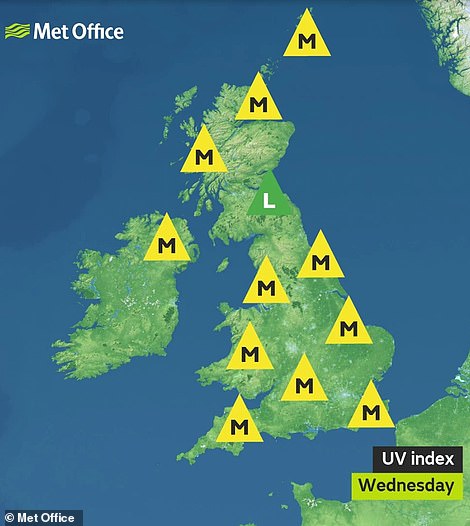 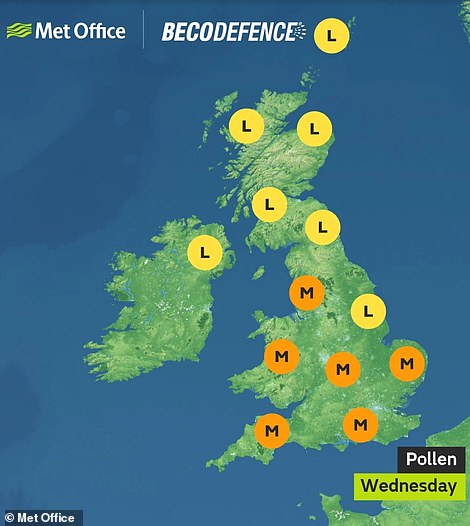 The UV index is moderate for almost the whole of Britain today (left), while the pollen count will be moderate in places (right)

She said: ‘Anywhere within the warning area there is a risk that, with persistent rainfall, there could be a localised impact in terms of flooding. Tomorrow unfortunately is another wet day.’ 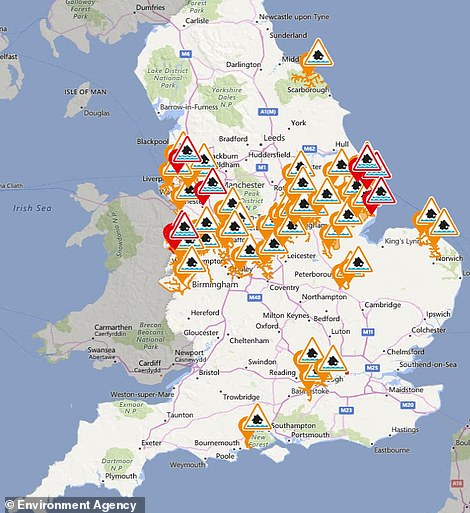 The Environment Agency has issued 44 flood alerts (in orange), advising flooding is possible, and seven flood warnings (in red), which mean flooding is expected

Going into the weekend, the wind direction is expected to change, meaning less heavy and persistent rain, although the weather will still be unsettled with some showers expected, Ms Diamond said.

Yesterday, roads had to be closed including a section of the M25 when two sinkholes were exposed. The worst downpours affected a swathe of the UK from Wales to the Midlands, along the east coast and up to Newcastle.

Photos emerged of the top of traffic lights and playground equipment poking out of water in Pembroke, South Wales, while others showed cars fording waterlogged roads in Birmingham and Kent.

In the West Country, river valleys became flooded and water began lapping near homes in low-lying villages. More than 80 homes had power cuts in St Austell in Cornwall, and Torquay in Devon.

A centuries-old thatched cottage near Dartmoor was destroyed when it was hit by lightning. Roadside rescue service Green Flag said it was set for a surge in demand with 22 calls for assistance expected every minute.

Network Rail said it was coping with a month’s worth of rain which had flooded tracks in the South East. The atrocious weather has been caused by a low-pressure system drawing in warm air from Europe.