British military veterans are flocking to join Ukraine’s fight for freedom despite warnings that their involvement risks dragging Nato into the conflict.

Mamuka Mamulashvili, commander of a paramilitary group of foreigners who have been operating in the country for eight years, said he had about 600 applications from Britain, with scores of former soldiers already on the frontline or in training camps.

‘There are at least 100 Brits fighting,’ he said. ‘They are good fighters – among the best soldiers because they are well-trained and well-motivated.’

The revelation will alarm British ministers and military chiefs who fear that captured Britons could be used by Vladimir Putin to justify widening the war with retaliatory attacks on Nato nations.

‘No good comes from British service people or veterans going to Ukraine to be a part of this,’ Armed Forces minister James Heappey warned last week.

Yet when I visited a secret training camp in Ukraine on Sunday Mamulashvili summoned a group of about 40 recent recruits from a classroom and called for all the Britons to pose for a photograph. Sixteen stepped forward.

Although one or two such recruits have previously talked to the media, this was an astonishing display that underlines the number of British volunteers seeking to join Ukraine’s resistance.

Almost all asked for their identities to be hidden.

‘My parents don’t know I am here,’ said one of the younger men. ‘I told them I was going to Poland as a humanitarian volunteer. I don’t want them to be worried.’

Another said he had served for five years in the British Army and had been inspired to join Ukraine’s fight by the defiance of its president, Volodymyr Zelensky.

He insisted: ‘We all know politicians are liars but he seems different. This is a fight for freedom.’

He added that, having grown up in foster homes, he had been driven to join Ukraine’s struggle in a personal mission to prevent families being ripped apart and children forced to grow up without their parents.

Mamulashvili, commander of the Georgian National Legion, a volunteer militia which is part of Ukraine’s armed forces, let me visit his camp on condition I kept the site confidential. ‘The Russians are trying to find our location and targeting us,’ he said.

His battalion was set up by Georgian veterans in 2014 to fight pro-Moscow separatists in the Donbas in gratitude for the support of Ukrainians during their own nation’s fight six years earlier against Putin’s invading forces.

After driving to an agreed location outside some shops, three uniformed men with assault rifles swept the area before an Albanian recruit – AK-47 dangling over his shoulder – led me through a heavily-armed checkpoint to meet Mamulashvili. 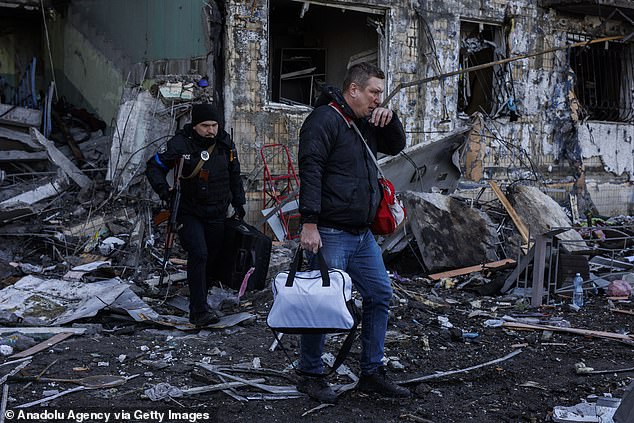 Destruction after an apartment building hit by Russian attack in Kyiv, Ukraine

‘We want people who know what they are fighting for,’ he said. ‘This is the only place in the world where you can defend freedom today. And it’s not just freedom for Ukraine but for the whole world.’

I watched as Mamulashvili formally inducted Britons who had arrived the previous day into his unit, handing them his legion’s badge featuring a Georgian wolf against the blue and yellow colours of Ukraine.

Among those to answer his call is Yorkshireman Matthew Robinson, 39, a former soldier and US military contractor in Iraq, who arrived last week after travelling from his home in Spain.

‘I want to test myself, push myself, stand for something,’ he said. Robinson stressed he also wants to atone for aiding an ‘unjust’ war in Iraq. ‘I got paid blood money in Mosul. Now I’m taking the opportunity to earn no money and do some good for an honourable cause. I feel like I’m making up for my time in Iraq.’

He admitted that his parents and three sisters are ‘not thrilled’ by his decision. It comes after more than a decade of enjoying sports such as sailing and sky-diving while living off income from rental properties bought with money earned in Iraq.

He said: ‘Having enjoyed a good few years of not doing anything beyond sport-orientated activities, I wanted to give something back again and put in some hard work. Then I’ll enjoy my life again, maybe respect it a bit more.’

Robinson, originally from Whitby, confessed to nerves. ‘Everyone is scared. Anyone who isn’t is lying to themselves – or a very brave man,’ he said. ‘You are running around with an AK-47 without air support.’ He travelled here with the aim of joining the International Legion for the Territorial Defence of Ukraine – a military unit set up by Zelensky with an appeal for foreigners at the beginning of the invasion.

The unit has been compared with the international brigades of the Spanish Civil War, which included 1984 writer George Orwell who fought with the republicans against General Franco’s fascists.

Robinson speaks of the Georgian legion as ‘a band of brothers’. However, the Britons are apprehensive over the shortage of body armour, helmets and weapons.

‘There’s an opportunity to go to Kyiv but we need some intelligence and to see some equipment before we go to the front,’ said Robinson. 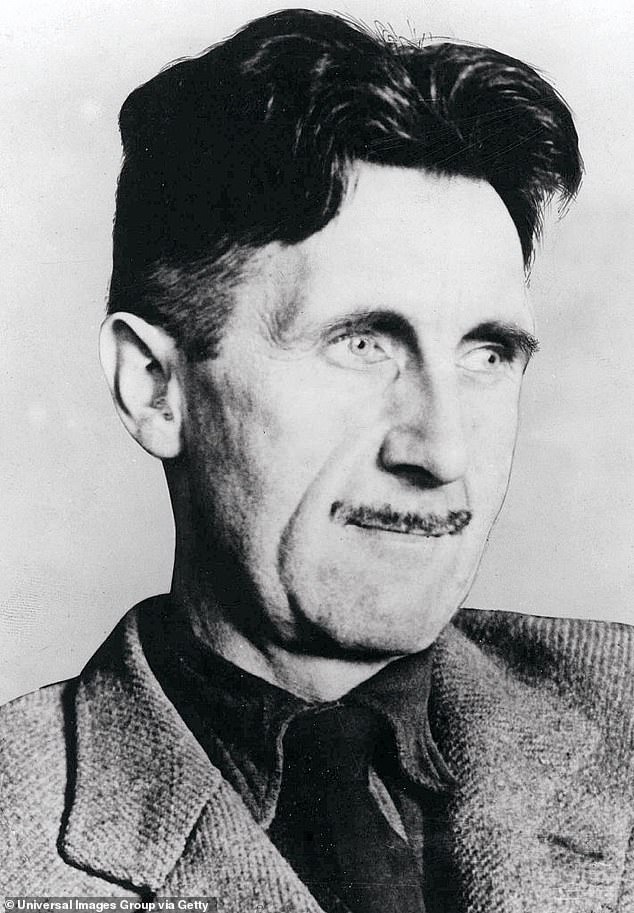 The unit has been compared with the international brigades of the Spanish Civil War, which included 1984 writer George Orwell who fought with the republicans against General Franco’s fascists

Mamulashvili – who claims to have been jailed by Russian forces when fighting aged 14 alongside his father almost 30 years ago – said he was taking in more than 20 foreign volunteers a day, mostly from Georgia, the UK and US.

The recruits are sent to the frontline, usually after five days of training, to join army brigades fighting across Ukraine.

He added: ‘They need a military background because we have no time for training.’

Although British Army chiefs admit a few serving troops have disobeyed orders and may have travelled to Ukraine to fight ‘in a personal capacity’, the Georgian commander said he did not accept such recruits and recently sent home a 21-year-old UK soldier.

British volunteers have been engaged previously in the Donbas combat, including at least two now involved in some of the war’s fiercest fighting around Mariupol.

Although Foreign Secretary Liz Truss has said she supports British civilians who wish to travel to fight with Ukraine, the Government advises against all travel to the country.