Ukraine has released a video which purports to show the grim aftermath of Russian bombardment of a military field hospital where hundreds were sheltering within in Mariupol.

The images, released by the far-right Azov Brigade, are reported to be from within the Azovstal steelworks.

It is the last Ukrainian holdout in the strategic port city which has been under siege for almost two months.

As many as 600 people are thought to be holed up in the hospital, many of those being treated for war wounds, plus 50 children and elderly.

Major Serhiy Volyna, commander of the 36th Brigade of the Ukrainian Army, told Sky News there had been a direct hit on the shelter of the military hospital, describing the situation as ‘difficult’.

This latest attack is despite Vladimir Putin calling off the offensive and ordering all routes out of the site of the Azovstal steelworks to be sealed off.

Petro Andryushchenko, an adviser to Mariupol’s mayor, said on Friday ‘every day they drop several bombs on Azovstal, despite false promises not to touch the defenders’, adding that ‘fighting, shelling, bombing do not stop’.

Defiant Ukrainian soldiers holed up in the steelworks are still refusing to surrender Mariupol despite being surrounded by Russian forces as the bodies of dead civilians continue to pile up.

In the video, which has not been independently verified, a rescue worker wearing a red head light can be seen digging away at rubble with a shovel.

In another shot, a survivor is holding a bottle of water with a tremendously shaking hand.

In a wider shot, rescue workers attend to the survivors in a dark and smoky scene reminiscent of a natural disaster or terror attack. 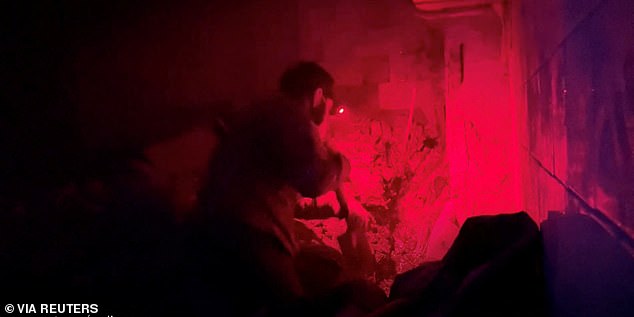 The images, released by the far-right Azov Brigade, are reported to be from within the Azovstal steelworks. It is the last Ukrainian holdout in the strategic port city which has been under siege for almost two months

Azov is a far-right all-volunteer infantry military unit whose members – estimated at 900 – are ultra-nationalists and accused of harbouring neo-Nazi and white supremacist ideology.

The Azov brigade is an all-volunteer far-right military unit of the National Guard of Ukraine, based in Mariupol, holding around 900 members.

Formed in May 2014, the ultra-nationalists have been fighting Russian forces since the annexation of Crimea in the same year.

In 2015, a spokesman for the Azov Brigade, Andriy Diachenko, said that up to 20 per cent of the group’s members are Nazis, he told USA today.

Russia used the Brigade’s official status with the National Guard as evidence that their invasion of Ukraine in February 2022 was to ‘denazify’ what they described as a nazi-leaning Ukranian government.

The Azovstal steelworks, a huge and sprawling facility that makes up almost 20 per cent of Mariupol, has been home to the last remaining Ukrainians in the city.

The rest of the city has been effectively razed to the ground by Russian forces.

Vladimir Putin gave the word to trap the survivors inside the steelworks and starve them out if they did not surrender.

Efforts to evacuate those remaining from the city along humanitarian corridors have reportedly been blocked by the Russians. 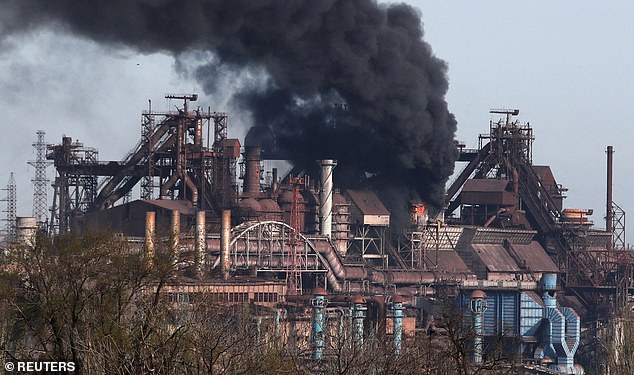 As many as 600 people are thought to be holed up in the hospital, many of those being treated for war wounds, plus 50 children and elderly (the Azovstal iron and steel works plant in Mariupol)

This comes after local officials said there were mass graves in the besieged city of Mariupol, containing around 9,000 bodies of Ukranian civillians.

Mariupol’s mayor Vadym Boychenko accused the Russians of ‘hiding their military crimes’ by taking the bodies of civilians from the city and burying them in Manhush.

Boychenko labelled Russian actions in the city as ‘the new Babi Yar’, a reference to the site of multiple Nazi massacres in which nearly 34,000 Ukrainian Jews were killed in 1941.

‘The bodies of the dead were being brought by the truckload and actually simply being dumped in mounds,’ adviser Andryushchenko said.