Roman Abramovich did take part in early peace talks between Ukraine and Russia, the Kremlin has admitted for the first time today.

The Chelsea FC owner, who is currently under UK and EU sanctions, was widely rumoured to have attended a first round of peace talks between the two sides in Belarus during the opening week of the war.

But now Dmitry Peskov, Putin’s spokesman, has confirmed he was in attendance – though is no longer attending the summits which are being left to diplomatic teams from the warring nations.

‘He did take part at the initial stage,’ Peskov said Thursday. ‘Now the negotiations are between the two teams, the Russians and Ukrainians.’

Peskov spoke out after it was revealed that President Volodymyr Zelensky had asked Joe Biden not to follow UK and EU sanctions on Abramovich because he might prove ‘useful’ as an intermediary in talks.

Russian oligarch Roman Abramovich was spotted in a VIP lounge last week bore he left Tel Aviv for Istanbul. On Wednesday, details emerged about how Ukrainian President Volodomyr Zelensky intervened to protect him from U.S. sanctions 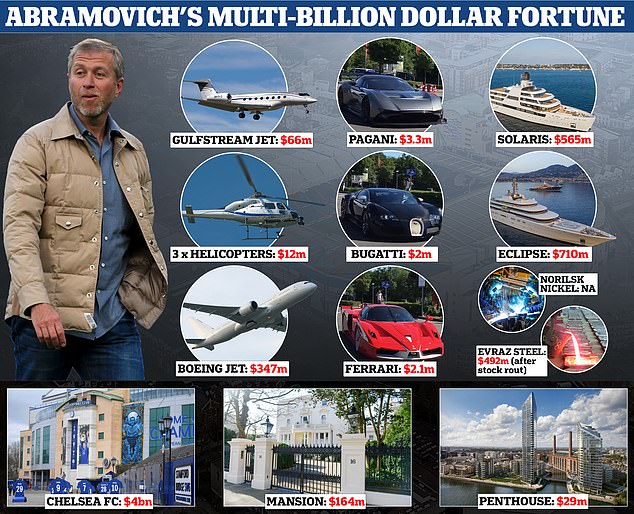 Biden then pressured the Treasury Department to hold off sanctions on the 55-year-old, which has not yet followed Britain and Europe in seizing his assets and banning him from travel.

The revelations, reported by explain how one of the world’s richest men has avoided U.S. sanctions even as the United Kingdom and European Union hit him with travel bans and asset freezes.

Sources familiar with calls told the Wall Street Journal, that Biden consulted Zelensky on a range of sanctions, including on Abramovich.

‘We are not going to read out private conversations between President Biden and President Zelensky,’ said Emily Horne, a spokeswoman for the National Security Council.

The Treasury Department also did not respond to a request for comment.

‘For the negotiations, and in the interest of them succeeding, it is not helpful commenting on the process nor on Abramovich’s involvement,’ said his spokesperson.

‘As previously stated, based on requests, including from Jewish organizations in Ukraine, he has been doing all he can to support efforts aimed at restoring peace as soon as possible.’

The Russian billionaire made his fortune buying up discounted state assets after the collapse of the Soviet Union.

In the past month he has been hit by a string of sanctions in the U.K. and E.U. thanks to his close relationship with Putin, and scrambled to divest before the asset freeze hit. 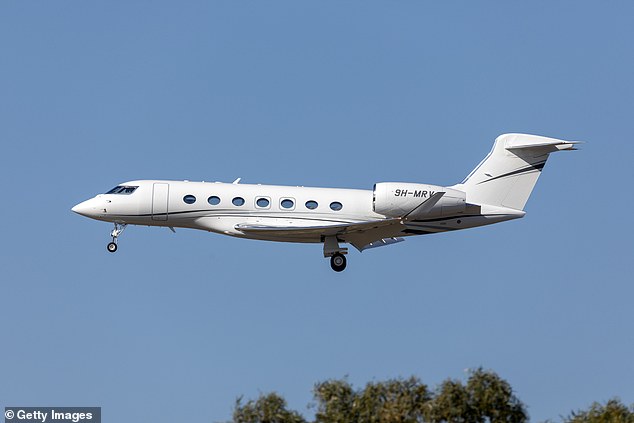 Abramovich’s Gulfstream – like the one pictured here – is valued at about $65 million and is effectively barred from international travel, according to the Department of Commerce 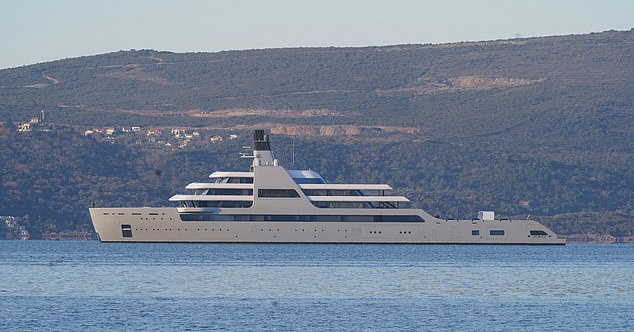 The billionaire’s superyacht Solaris was seen off Tivat, Montenegro, at the start of last week, but amid a seizure threat arrived in Turkey

He put Chelsea up for sale, and staff are said to have been ready for viewings at his 15-bedroom $195 million (£150m) mansion at Kensington Palace Gardens, London, and a three-storey penthouse at Chelsea Waterfront.

Abramovich himself is believed to be in Moscow, having traveled there from Israel, where he has nationality.

He quickly came under scrutiny by the Treasury Department as Russia invaded Ukraine almost a month ago, according to a person familiar with the issue, and his holdings were analyzed.

But it proceeded cautiously for fear that sanctions could affect global steel prices, given that he holds a stake in Evraz PLC which has steel plants in Oregon and Colorado.

At the same time Ukrainian officials were tapping up anyone with Russian contacts who might be able to act as an intermediary with Putin. That reportedly included film producer Alexander Rodnyansky who in turn contacted Abramovich.

But his involvement is viewed with skepticism in some quarters.

‘A lot of people claiming to be helping have their own financial or geopolitical interests at stake,’ said a western diplomatic source.

U.S. lawmakers have called for Washington to add its weight to the pressure on Abramovich. 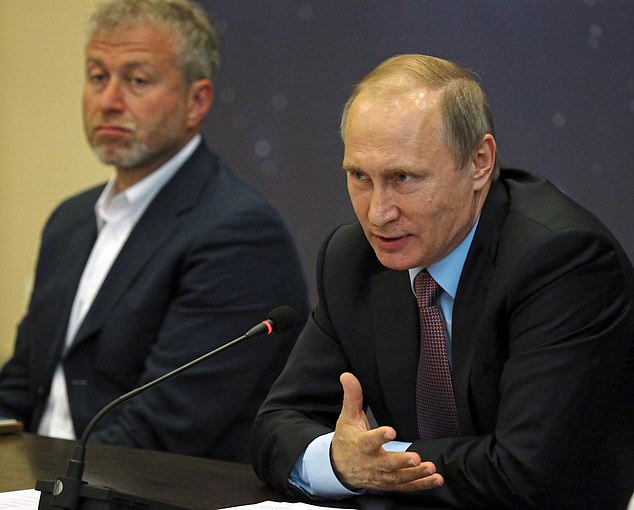 Abramovich made his fortune buying up discounted state assets after the collapse of the Soviet Union and was one of the oligarchs that make up Russia’s wealthy elite. The West has imposed sanctions on them in an attempt to put pressure on Vladimir Putin

‘We request that Abramovich be sanctioned as a matter of urgency,’ wrote members of Congress, including Rep. Tom Malinowski, co-chairman of the Congressional Counter-Kleptocracy Caucus.

It came after investigators at State Street bank in Boston claimed that more than a billion dollars of his in cash had been funneled through offshore companies into the US from 2001 to 2016, BuzzFeed News reported.

And last week, the administration did make a move, effectively barring one of Abramovich’s private jets from making international flights.

His $65 million Gulfstream G650 was on a list of 100 aircraft operated by Russian passenger and cargo carriers such as Aeroflot, AirBridge Cargo, Utair, Nordwind, Azur Air and Aviastar-TU.

Commerce Secretary Gina Raimando said: ‘Today, the Department of Commerce is demonstrating the power and reach of the actions we took over the past few weeks in response to Russia’s brutal war of choice against Ukraine.’

‘We are publishing this list to put the world on notice – we will not allow Russian and Belarusian companies and oligarchs to travel with impunity in violation of our laws.’

Abramovich’s super yachts have also been on the move – fleeing European waters for areas were they are less likely to be touched by sanctions. My Solaris, worth $560 million, was moored in Barcelona two weeks ago and the Eclipse, worth $704 million was in the British Virgin Islands but both have since arrived in Turkish ports.