An explosion has struck an arms factory deep inside Russia, a senior Ukrainian official said – just the latest in a series of fires and blasts at military sites amid suspicion they are being orchestrated from Kyiv.

Anton Gerashchenko, adviser to the Ukrainian foreign ministry, tweeted out footage which he claimed showed the arms factory in Perm – 700 miles to the east of Moscow – burning, claiming a ‘powerful’ explosion had struck it.

Russia acknowledged a fire took place at the factory around 8pm Sunday but did not say what caused the ‘accident’. It comes amid a series of blazes and blasts at military sites which Kyiv is thought to be orchestrating, though it has not confirmed this.

The Perm factory is used to make rockets for Russian artillery systems of the kind being used to bomb Ukrainian cities and troops.

The blast came as Ukraine today released footage showing Polish tanks arriving in the country as they prepare to join the fight in Donbas. Warsaw has donated more than 200 of its Soviet-era T-72 tanks to Ukraine.

At the same time, British intelligence said that more than quarter of Russia’s invasion force is now out of action after suffering heavy losses and will take years to recover. 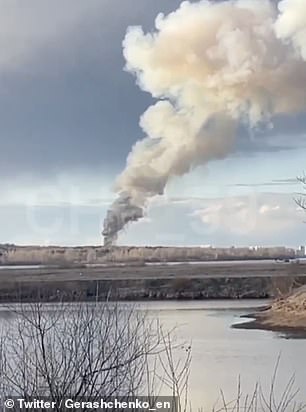 A fire at a Russian arms factory has killed at least two workers, local officials confirmed, as a Ukrainian government adviser shared this footage and claimed there had been an ‘explosion’ 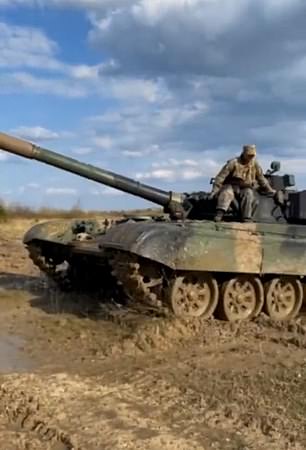 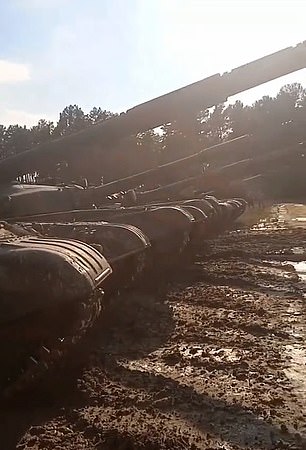 Ukraine today released footage which it said showed T-72M1 tanks donated by Poland arriving on the frontlines near Donbas, as crews prepared to join the fight

The Ministry of Defence said that  Putin assembled around 65 per cent of his total ground forces for the attack on Ukraine, around 25 per cent of which has now been rendered ‘combat ineffective’.

‘Some of Russia’s most elite units, including VDV [paratroopers], have suffered the highest levels of attrition,’ the briefing said. ‘It will probably take years for Russia to reconstitute these forces.’

Meanwhile Sergei Lavrov, Russia’s foreign minister, denied reports that Putin is aiming for victory in Ukraine by May 9 because coincides with the date of an annual parade commemorating Nazi Germany’s surrender.

Lavrov said the victory over Hitler’s forces will be marked in a ‘solemn manner’ and won’t affect the timing of events in Ukraine.

‘Our soldiers won’t base their actions on a specific date,’ he said. ‘The timing and speed of what is happening in Ukraine will hinge on the need to minimize risks for civilians and Russian solders.’

Russia is now more than two months into what was supposed to be a days-long ‘special military operation’ to topple Ukraine’s government and install a puppet regime loyal to Moscow.

Having been defeated in their mission to take the capital Kyiv, Putin’s generals have merged their battered units together and thrown them back into battle in an effort to take the eastern Donbas region.

Fighting here will likely prove pivotal: If Ukraine can hold on, then Russia will likely lack the manpower to carry out more attacks elsewhere and may even struggle to hold the territory it has taken.

If Russia prevails, then it could push further west in an attempt to seize Mykolaiv and Odesa to establish control over the Black Sea coast, and perhaps return to Kyiv.

In an effort to hamstring Russia’s forces, Ukraine has been carrying out an increasing number of attacks behind enemy lines in order to cut supply lines and wear out the invasion effort.

Belgorod, which sits just a few dozen miles from the Ukrainian frontline, has been repeatedly targeted with explosions at ammunition dumps, fuel depots and railway bridges in the last several weeks.

Ukraine has refused to acknowledge carrying out any such attacks, but is widely thought to be behind them – mostly using drones and missiles. 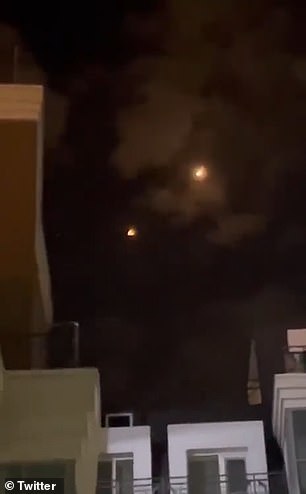 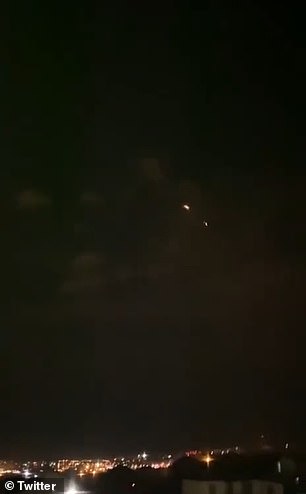 Two loud explosions were heard in Belgorod, a Russian city near the Ukraine border, overnight as videos appeared to show jets letting off flares in the night sky

Russia last month accused Kyiv of using helicopters to blow up a fuel dump in Belgorod, which Ukraine denied.

Since then, two fuel dumps, and ammunition dump, and a railway bridge have been destroyed. A fire broke out at a military facility in the region yesterday, while a blaze also destroyed a base in Tver, near Moscow, two weeks ago.

Overnight Monday, air defence systems were once again active over Belgorod with two explosions heard as lights appeared in the sky.

The bright marks appear to have been a trail of flares left behind by either jets or helicopters flying over the city, in what observers speculated could be another Ukrainian attack.

Belgorod Governor Vyacheslav Gladkov sought to dispel those rumours, saying the flares were fired by Russia jets and that the blasts had caused no damage.

However, he did not explain what the blasts were, why they had taken place over Russia rather than over Ukraine, or why Russian jet would be letting off flares above one of their own cities where they should be protected by air defences.

Flares are designed to distract heat-seeking rockets, and are generally only used over enemy territory where aircraft are in danger of being hit.

The Russian Defence Ministry said its forces struck dozens of military targets in eastern Ukraine in the past 24 hours, including concentrations of troops and weapons and an ammunition depot near Chervone in the Zaporizhzhia region.

The information could not be independently verified. 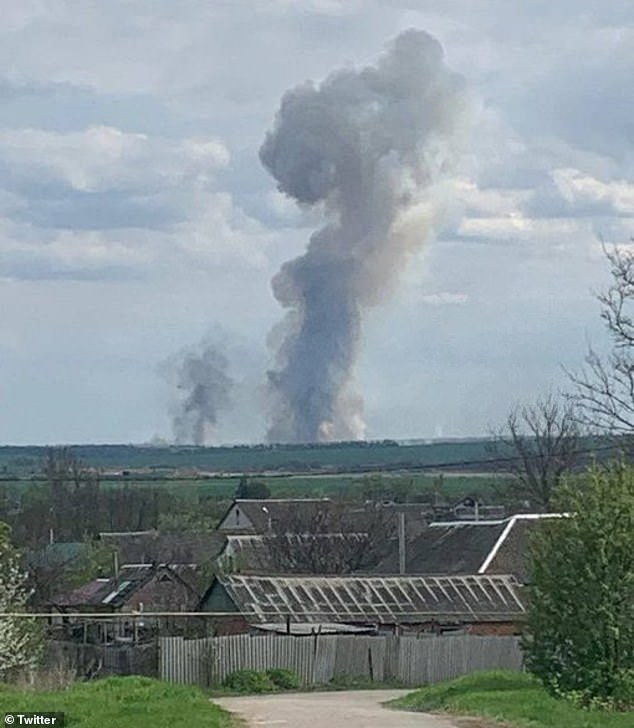 Flames were seen rising from Belgorod during the day on Sunday, as a blaze engulfed a Russian defence ministry facility

The Ukrainian president’s office said at least three people were killed and another three, including a child, were wounded in the eastern Luhansk region over the last 24 hours.

It said that four people were wounded in the shelling in Donetsk, another eastern region.

The regional administration in the Zaporizhzhia region farther west said that at least two people died and another four were wounded in the Russian shelling of the town of Orikhiv.

A full picture of the battle unfolding in eastern Ukraine is hard to capture.

The fighting makes it dangerous for reporters to move around, and both sides have introduced tight restrictions on reporting from the combat zone.

Western officials say Russia is advancing slowly in its eastern offensive and has captured some villages, but is inflicting heavy civilian casualties through indiscriminate bombing.

Hundreds of millions of dollars in military assistance has flowed into Ukraine during the war, but Russia’s vast armouries mean Ukraine still needs massive support.

America has pledged some $33billion to help arm and support Ukraine, while its allies have stepped up deliveries of heavy weapons including artillery, tanks, armoured vehicles and helicopters.

Meanwhile the West is debating harsher sanctions on Russia to prevent their money being used to fund the war, including cutting off oil, gas and coal exports.