Vladimir Putin gave a chest-beating speech to troops Moscow’s Victory Day parade today – telling his soldiers that they are now fighting for the security of the entire country against what he called Western plans to invade.

Twisting the truth of his war on Ukraine, he declared NATO to be the aggressor and said Russia is trying to deescalate the situation and congratulated his troops on a day of ‘great victory’ despite their mounting defeats.

Describing his ‘special military operation’ in Ukraine as ‘the only right decision’, he vowed to achieve victory over ‘neo-Nazis’ – repeating Kremlin falsehoods that the country has been taken over by a fascist regime.

But he stopped short of what many had feared: An official declaration of war on Kyiv which would have allowed him to mobilise Russia’s military reserves and conscript civilians in order to escalate fighting across the border.

A planned flyover by his ‘Doomsday jet’ – which would allow him to continue ruling Russia in the event of a nuclear blast – was also axed at the last minute, allegedly due to fears it could be attacked.

The parade itself is also downsized from previous years, featuring almost a third fewer vehicles than in 2020 because it has committed – and lost – so many of its ground forces in Ukraine.

Putin’s speech came after a parade through the streets of Vladivostok that featured tanks streaming Soviet banners and ‘Z’ symbols emblazoned on the site of motorbikes in the orange and black colours of the Saint George’s ribbon, the highest decoration of Imperial Russia. 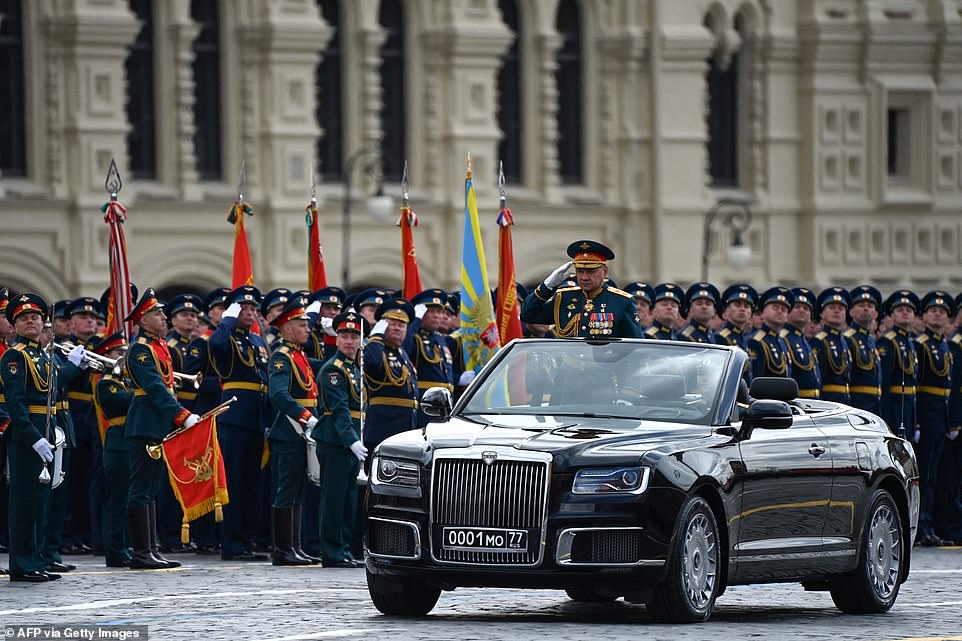 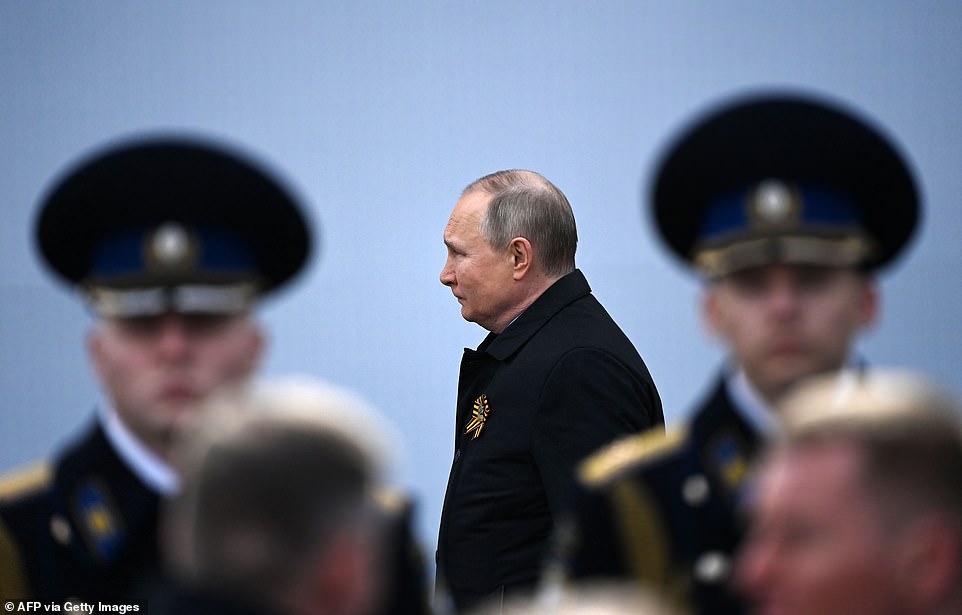 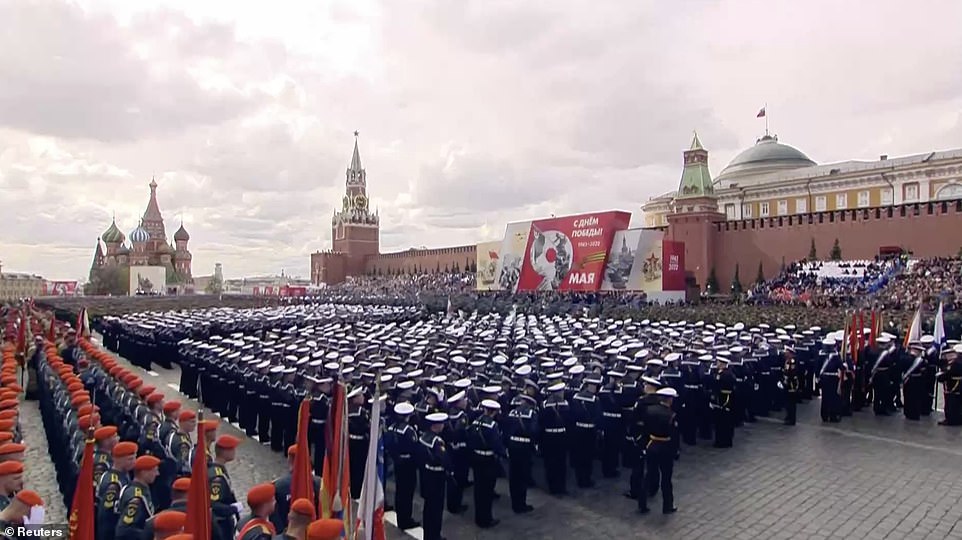 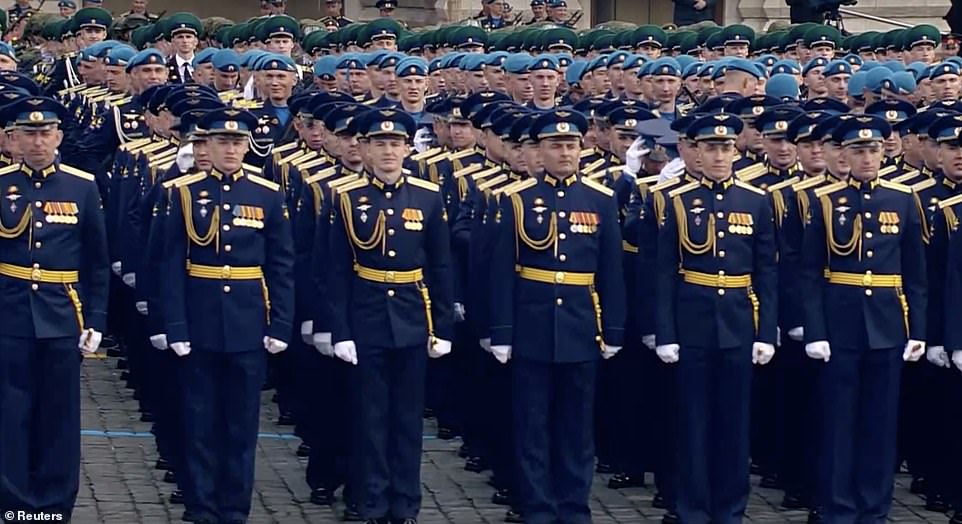 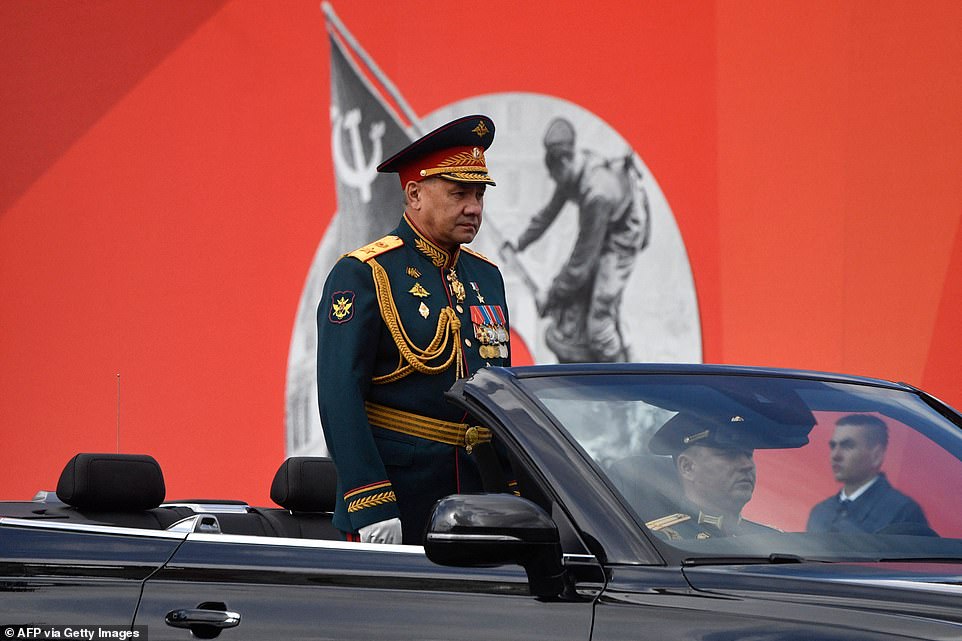 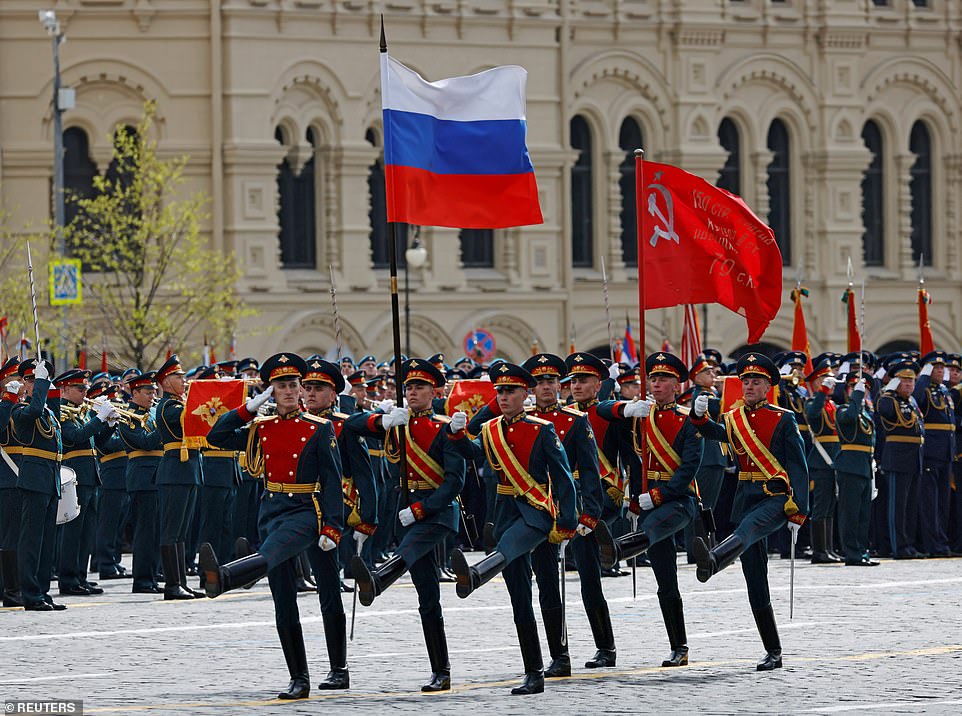 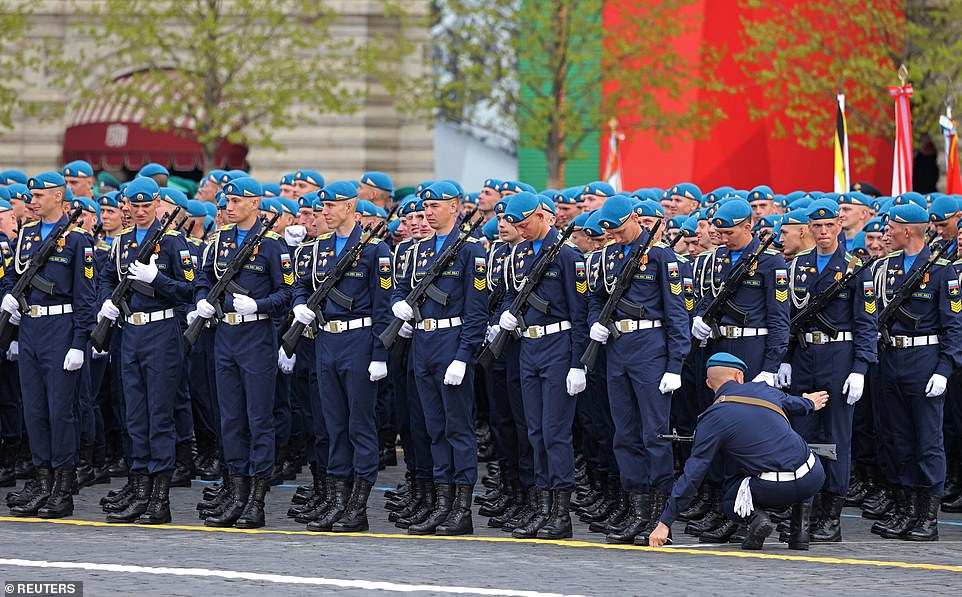 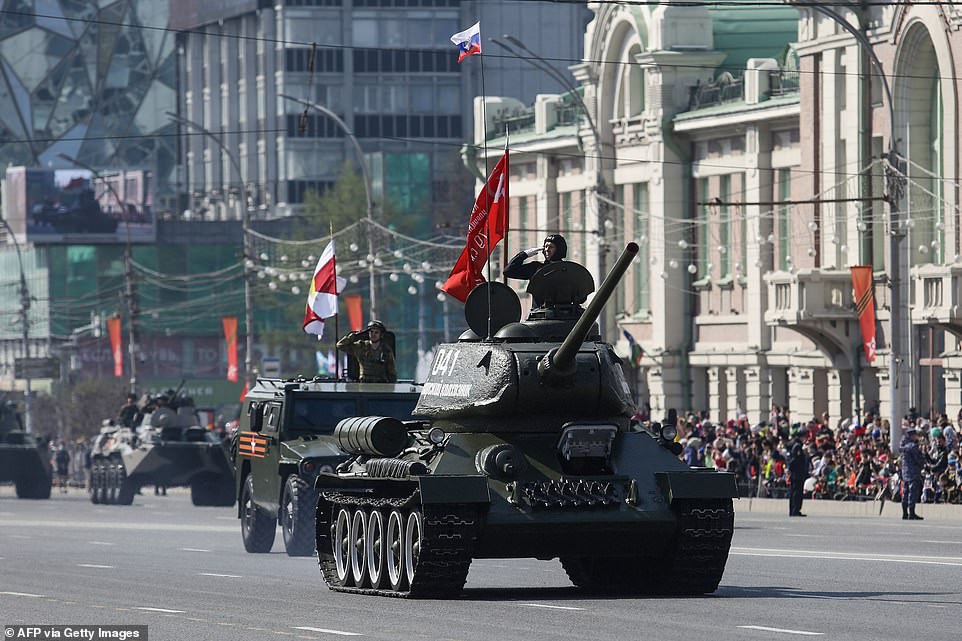 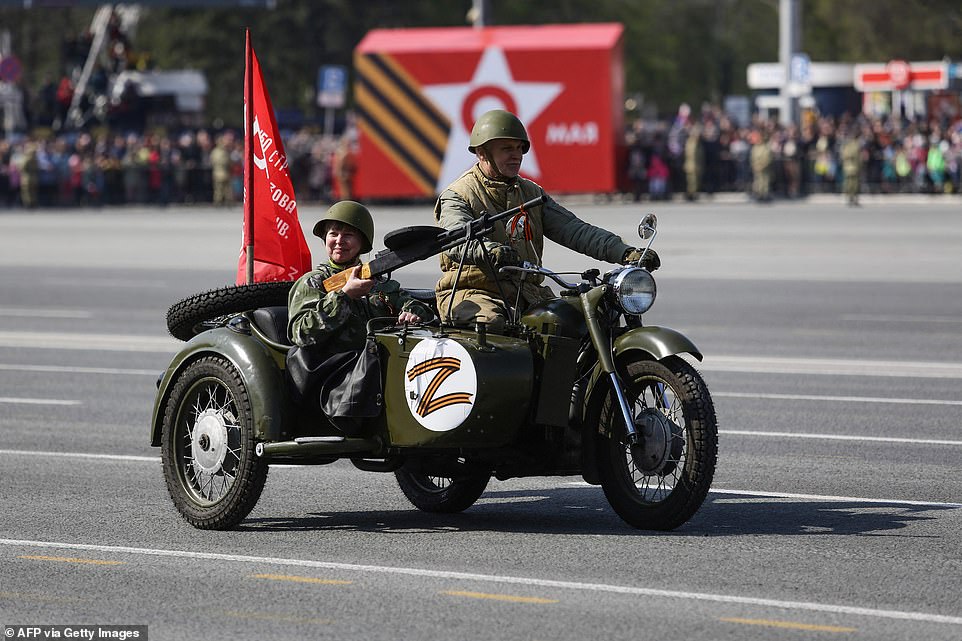 Goose-stepping soldiers followed close behind, rifles held across their chests which were emblazoned with a ribbon in the same Saint George’s colours. A Soviet-era motorbike and sidecar joined them, a ‘Z’ symbol – which has become synonymous with Russia’s war in Ukraine – stuck on the side in the same black and organ livery.

The parade in Vladivostok – which is seven hours ahead of Moscow time – took place ahead of the main parade which will process through Red Square later today. Vladimir Putin is due to oversee it, and is expected to give a speech hailing Russia’s military might and drumming up support for the war in Ukraine.

But after the failure of Russia’s generals to seize Kyiv and with their offensive in Donbas largely at a standstill, there will be little for Putin to cheer. That has led to speculation – denied by the Kremlin – that Putin will instead use the speech to announce a further escalation in the fighting.

Putin could use his speech to officially declare war on Ukraine instead of the ‘special military operation’ he is currently waging, allowing him to call up Russia’s military reserves and perhaps conscript more men into the army in the hopes of turning the tide of war in his favour.

President Zelensky has warned his nation to be on high alert for missiles strikes across the country today, suspecting that Russia will try to dampen any displays of defiance using withering rocket and artillery fire.

All of which comes against a back-drop of increased nuclear threats from the Kremlin and Russian state media, adding to the lingering fear that a desperate and detached Putin could order an atomic strike either on Ukraine or its allies in order to achieve victory by shock and awe.

Victory Day in Russia is a public holiday that marks Nazi Germany’s surrender to Field Marshal Zhukov and other Allied commanders that ended the Second World War in Europe.

Most other nations mark the holiday on May 8 – the day the surrender was signed shortly before midnight in Berlin – but Russia marks it a day later because the time difference between the German capital and Moscow meant the signing happened on May 9.

The Soviet Union lost a staggering 27 million people in World War II, which it calls the Great Patriotic War. The conflict, which devastated cities and the countryside, caused enormous suffering and left a deep scar in the national psyche.

Victory Day is a rare event in the nation’s divisive post-Soviet history that is revered by all political players, and the Kremlin has used that sentiment to encourage patriotic pride and underline Russia’s role as a global power. 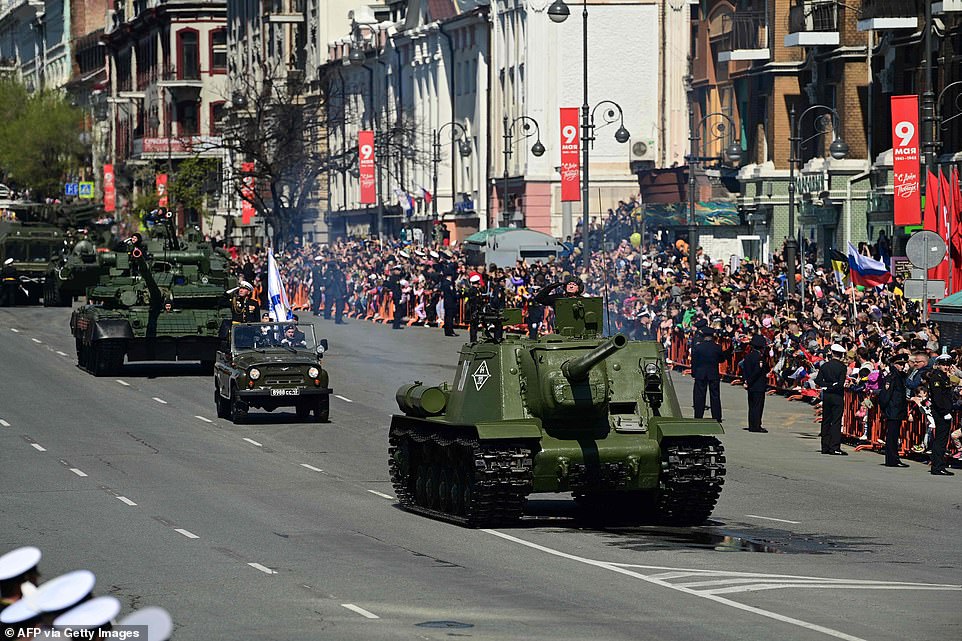 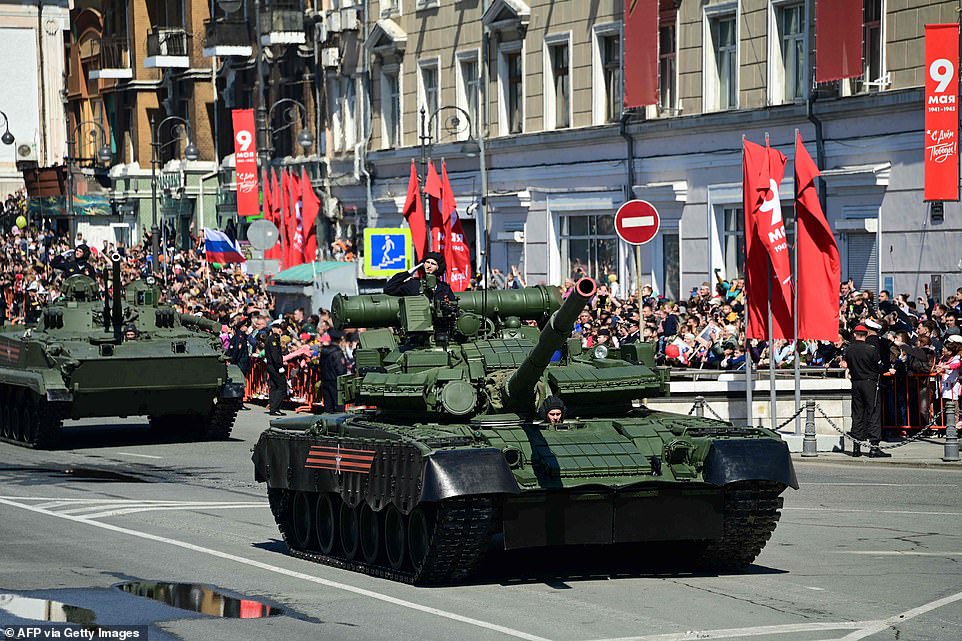 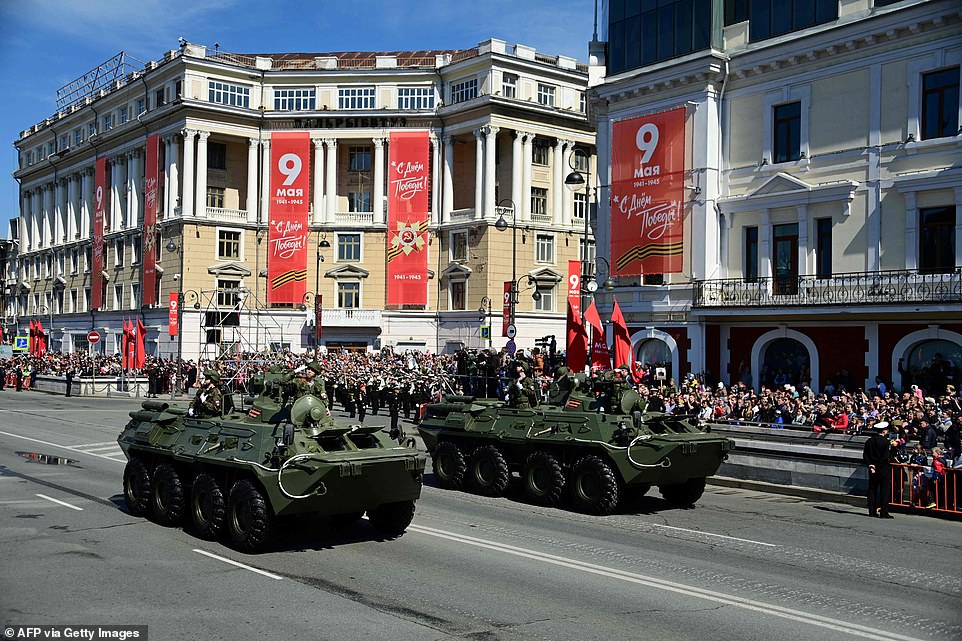 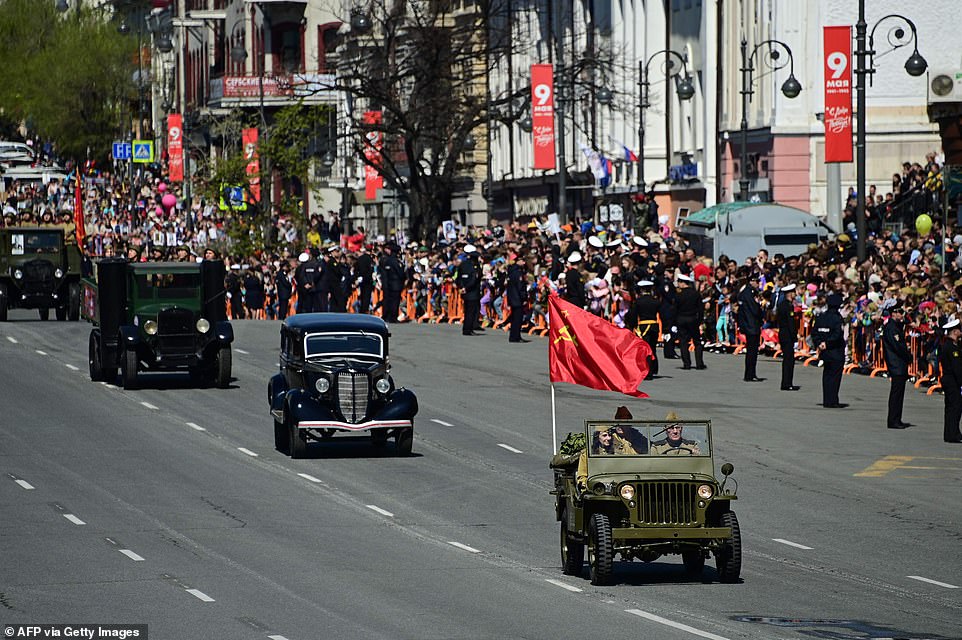 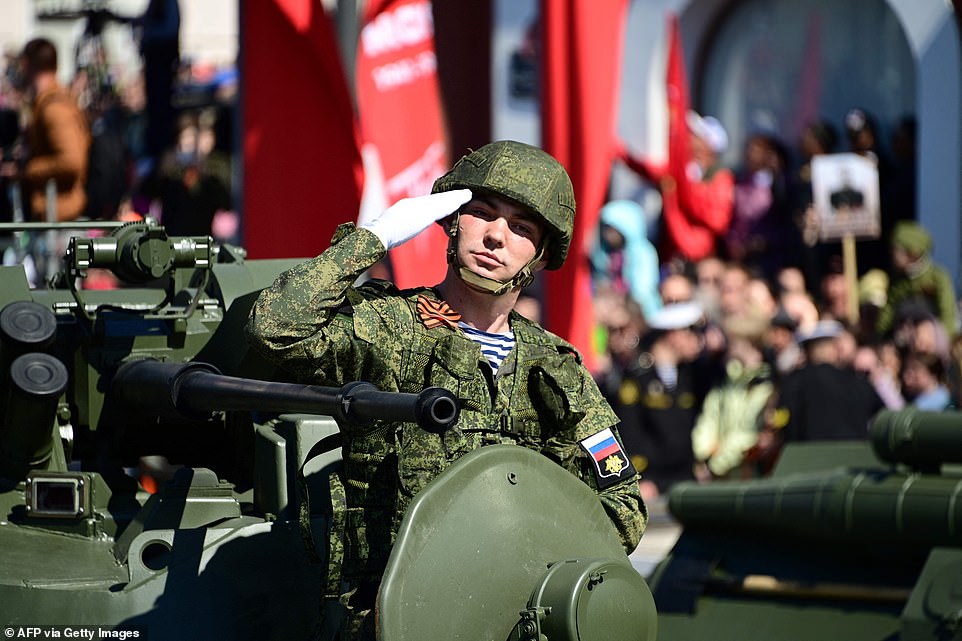 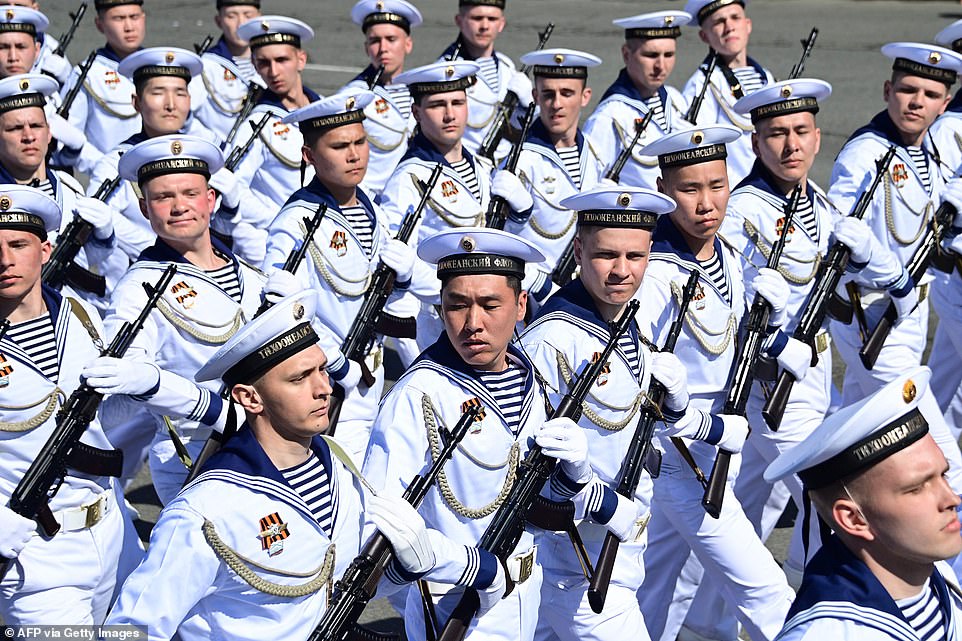 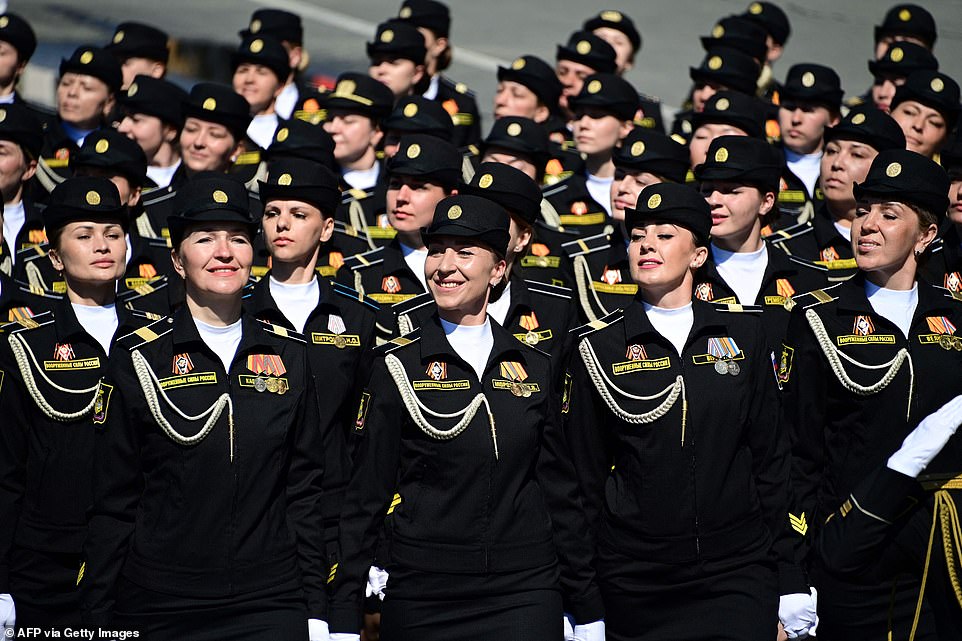 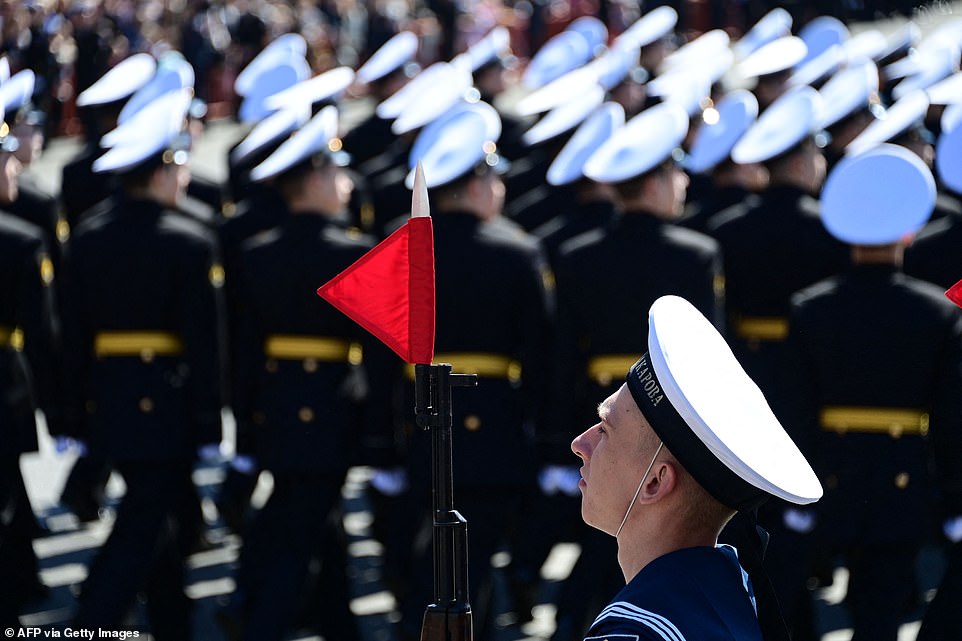 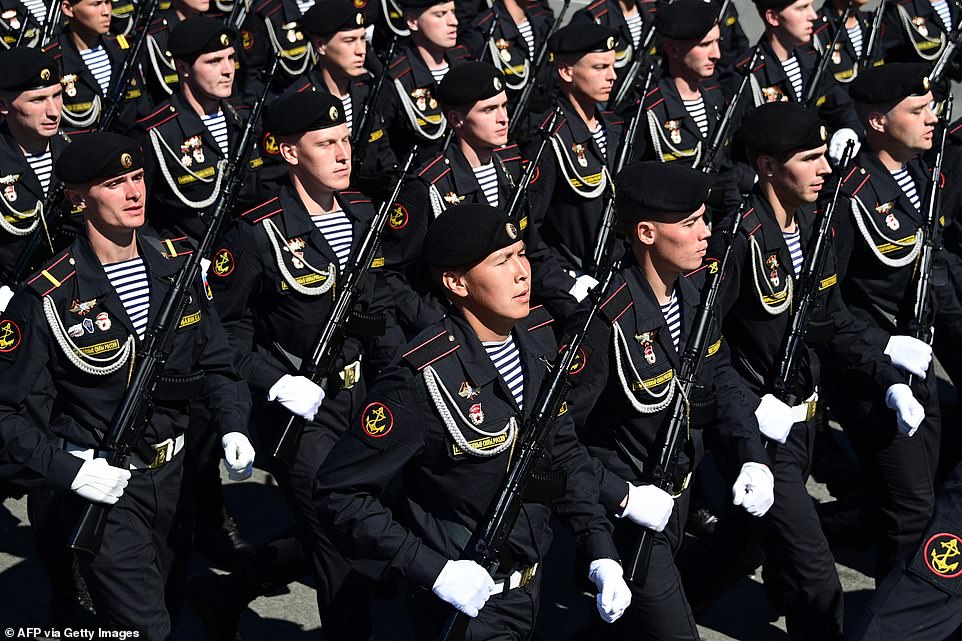 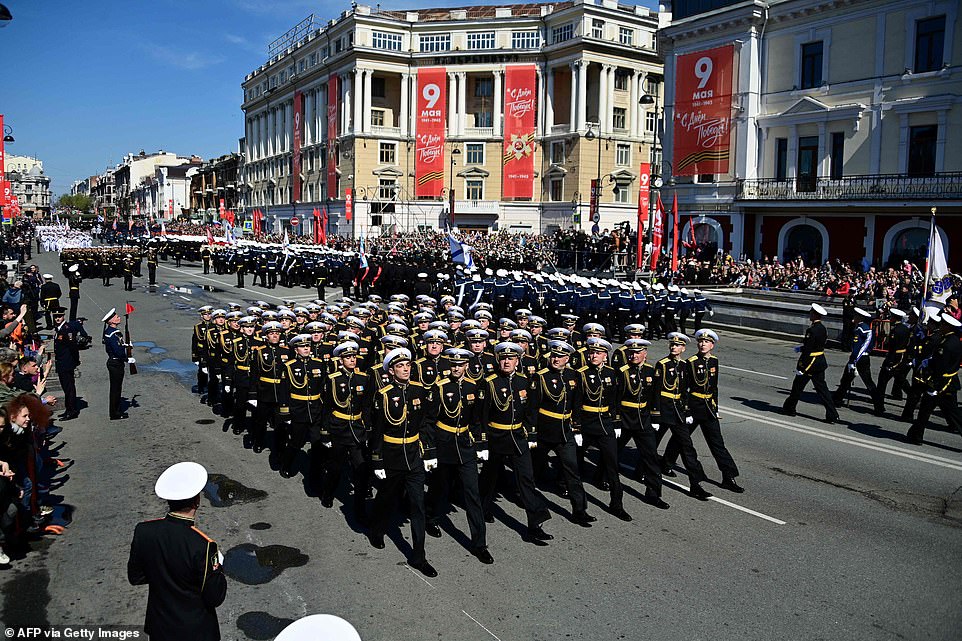 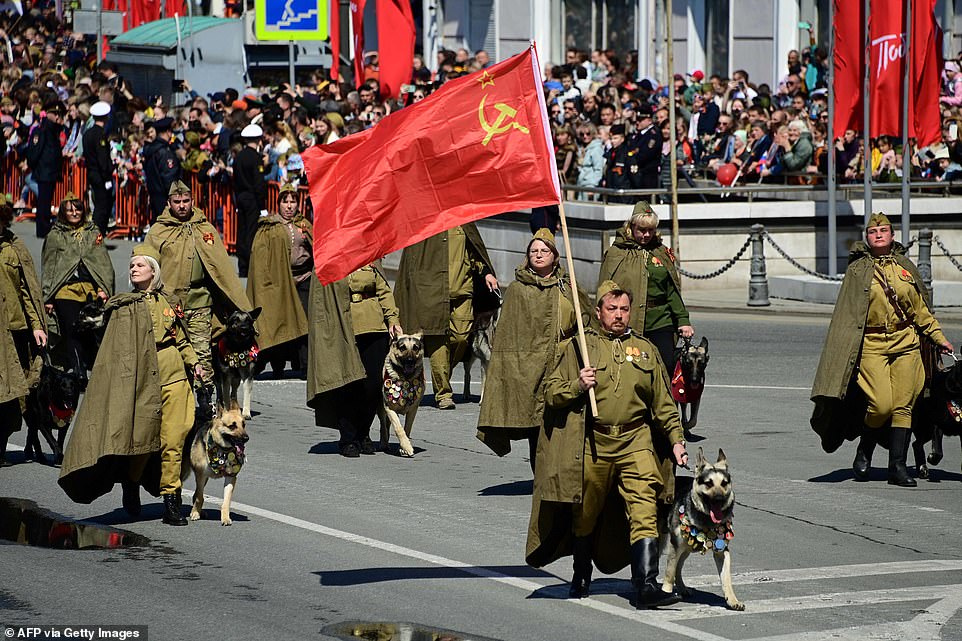 This year, the array of weapons to be displayed in the parade has been significantly curtailed from last year in an apparent reflection of the military’s heavy engagement in Ukraine.

In ordering the invasion, Putin declared that it was aimed at the ‘demilitarization’ of Ukraine to remove a perceived military threat to Russia by ‘neo-Nazis’ – rhetoric condemned by Ukraine and the West as a fictitious cover for a blunt act of aggression.

To try to back up the claim, Putin and his officials have pointed to the adulation by Ukraine’s right-wing groups of nationalist leaders Stepan Bandera and Roman Shukhevych, who sided with the Nazis during World War II and their perceived use of Nazi units’ symbols.

The rhetoric also has been used by the Kremlin to try to bolster public support for the war amid heavy losses of troops and equipment and massive economic damage from Western sanctions.

Ukrainian President Volodymyr Zelenskyy, who is Jewish, has derided the Kremlin ‘denazification’ claim. Russian Foreign Minister Sergey Lavrov fired back by drawing a parallel between Zelenskyy and Adolf Hitler – a statement that has drawn sharp criticism from Israel.

Some in Ukraine and the West expected Putin to try to seek quick gains before the May 9 holiday in a possible attempt to present it as a decisive victory and use it as an exit from what increasingly looks like a disastrous quagmire bleeding Russia’s resources and threatening its stability.

After a failed attempt to storm Kyiv and other big cities in Ukraine’s north in the early stages of the war, the Kremlin has shifted its focus to the eastern industrial heartland known as the Donbas, where Moscow-backed rebels have been fighting Ukrainian government forces since 2014. That conflict erupted weeks after Russia’s annexation of Ukraine’s Crimean Peninsula.

The Russian military has rearmed and resupplied its forces withdrawn from Kyiv and moved them to Donbas in an apparent attempt to encircle and destroy the most capable and seasoned Ukrainian troops concentrated there.

But that offensive in the east has faced staunch Ukrainian defenses and made only incremental advances, dashing Kremlin hopes for a quick victory. Significant gains look all but impossible before May 9.

In an interview this week, Lavrov said: ‘Our military isn’t going to artificially link its action to any date, including Victory Day.’ 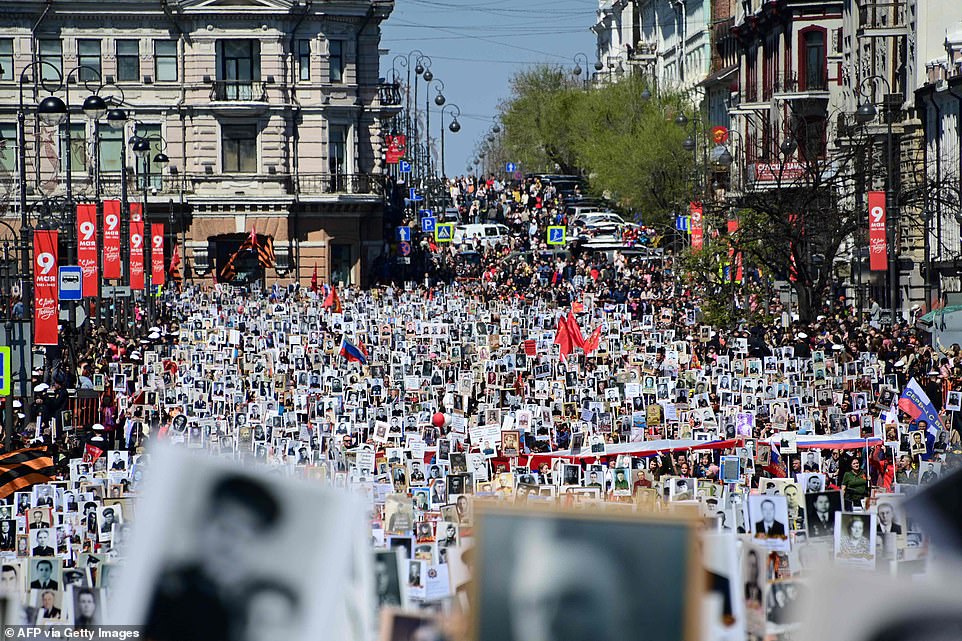 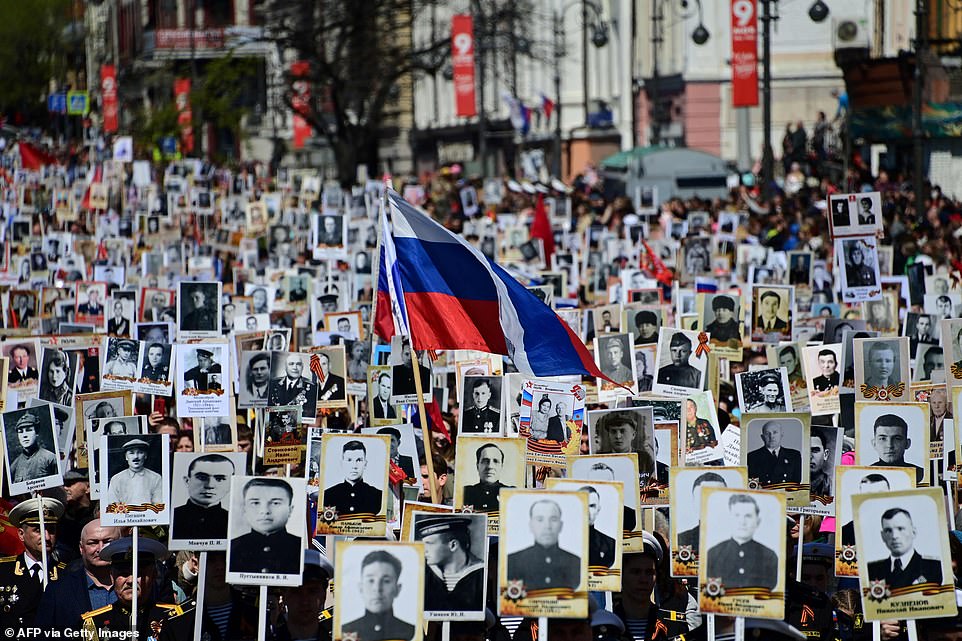 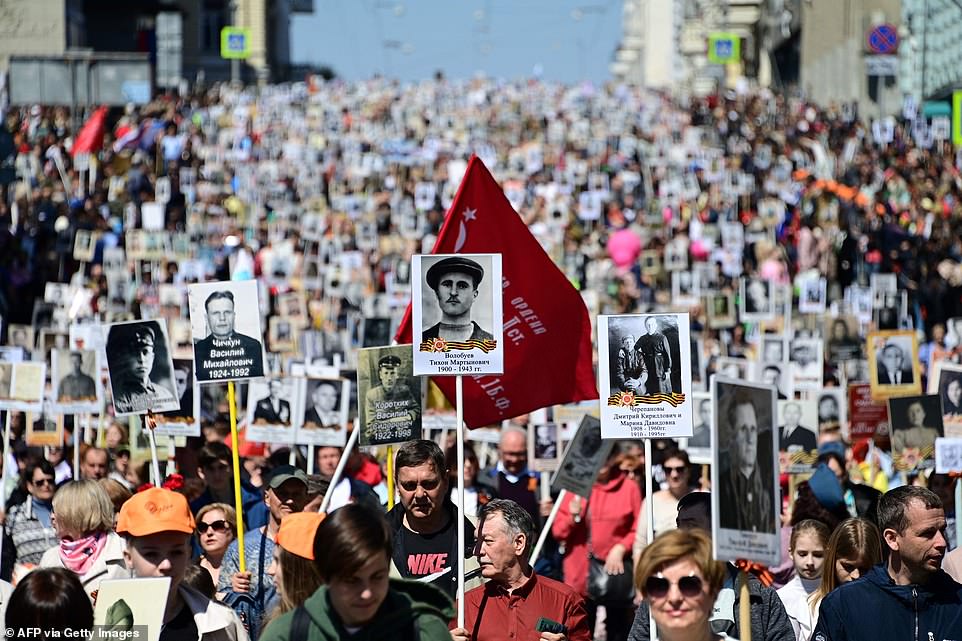 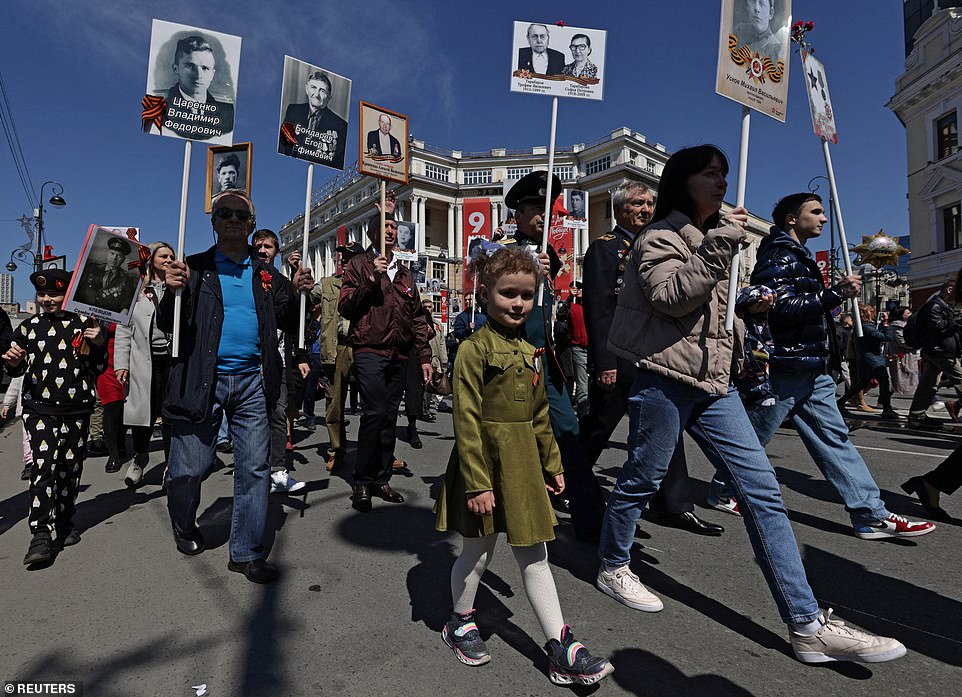 Some Russian hard-liners have criticized the Kremlin for using only a limited force and urged a nationwide mobilization effort. Some Western officials and observers believe Putin may use May 9 to formally declare a war and announce a total mobilization of the population to boost troop numbers for an offensive.

‘He’s been rolling the pitch, laying the ground for being able to say, `Look, this is now a war against Nazis, and what I need is more people,” British Defense Secretary Ben Wallace told LBC Radio last week.

Russian authorities have claimed that only volunteer contract soldiers have been fighting in Ukraine, even though many conscripts were taken prisoner in the war’s initial days.

Russia’s military has about 1 million service personnel – 400,000 of them contract soldiers, including 147,000 in ground forces. Western officials estimated the initial strength of Russia’s invasion force at about 180,000.

The military acknowledged losing 1,351 soldiers as of March 25 and hasn’t updated its casualty numbers since then. Western officials have said Russian losses were much heavier and estimated that up to a quarter of Moscow’s initial attacking force was made unfit for combat.

If the war drags on, the current Russian troops numbers in Ukraine could be insufficient to sustain the operations, forcing the Kremlin to rely on poorly trained conscripts or call up reservists.

The Kremlin faces a stark choice between trying to win the war with a limited force or attempting to bolster its troops in Ukraine with draftees and reservists, a move that could bring public outrage and potentially destabilize the political situation.