A Russian powerlifter known as the ‘strongest man in the world’ has carried a 55-stone cow on his back for more than a minute in an impressive display of strength.

Dmitry Khaladzhi, 40, has performed in the Donetsk circus and holds 63 Guinness World Records to his name.

Footage shows the strongman, of Ukraine, holding a cow on his back in a field near Moscow, Russia.

Dmitry Khaladzhi, 40, carries a 55-stone cow on his back for more than a minute in a field near Moscow, Russia. He has been called the ‘strongest man in the world’ and holds 63 Guinness World Records

He grips on to the animal’s legs and and shows a determined look in his eye, unwilling to give up.

Dmitry steadily moves forward while keeping his gaze focused on the movement of his feet.

He is said to have performed the stunt to prove what he is truly capable of.

The hulking powerlifter has proudly broadcasted his extraordinary feats of strength. 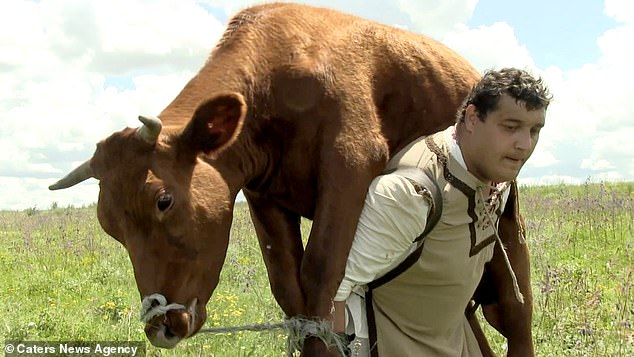 He gradually walks forward with the cow attached to his back. The Ukraine-born powerlifter’s records are to include lifting a 335-pound stone with one hand 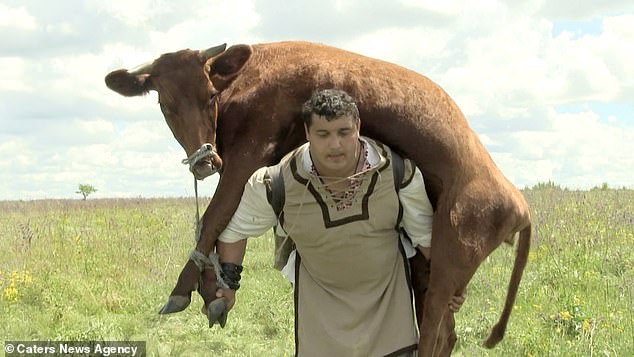 This is not the first time he has carried animals for his stunts (pictured). In 2017, he took on the challenge of holding a horse on his back. Dmitry’s cult status has led bodybuilding websites to call him the ‘world’s strongest giant’

In 2017, he took on the challenge of carrying a horse on his back.

His world records are said to include lifting a 335-pound stone with one hand, binding six 20cm nails in 90 seconds and lying down on a bed of nails while three concrete blocks weighing over 1,500 pounds were smashed with sledgehammers on his chest. 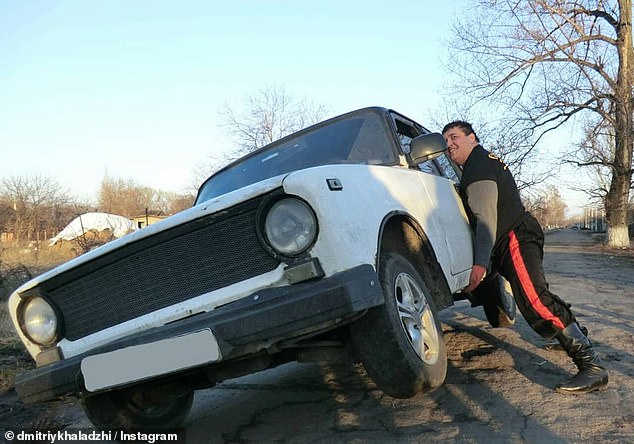 He sent the internet into meltdown after a video emerged of him bending a metal rod with his teeth, and another showed his performance of Devil’s Forge. 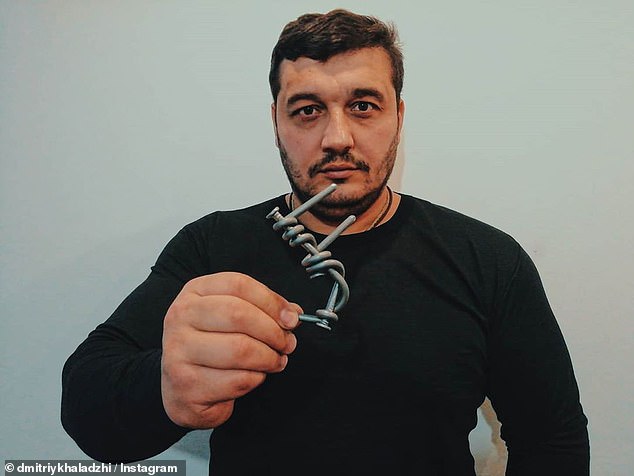 Dmitry holds a ‘classic knot of three nails’ manipulated by his sheer physical force.  Among his portfolio of world records, he can bind  six 20cm nails in 90 seconds

Among his ‘unique features, he boasts the ability of ‘lifting two adults with teeth on a belt weighing up to 200kg’, on his website.

For this reason, bodybuilding websites including Generation Iron have dubbed him the ‘world’s strongest giant’.