The US has only accepted seven Ukrainian refugees since the war began, despite President Joe Biden saying he would welcome those fleeing Russia ‘s aggression ‘with open arms’.

At least five Ukrainian refugees fleeing to the U.S. have been detained in Immigration and Customs Enforcement (ICE) centers, with one person moved to a detention center in Louisiana, according to Newsweek.

State Department data obtained by Reuters reveals the low number of accepted refugees in the U.S. while other western countries have taken in thousands – and even millions of such asylum-seekers.

One reason Ukrainian refugees are being turned away at the U.S. southern border is due to ongoing enforcement of the coronavirus-era Title 42, which allows migrants to be instantly expelled due to the ongoing health emergency.

Homeland Security Secretary Alejandro Mayorkas told reporters Thursday afternoon that Border Patrol agents were reminded there are individualized exceptions to Title 42 that can be applied to Ukrainians arriving at the southern border.

Revelations of America’s low acceptance of Ukrainian refugees come as estimates reveal the U.S. could be just hours away from another wave of mass migration if Title 42 is lifted.

An Axios report Thursday shows 170,000 migrants are waiting on the Mexican-side of the southern border to cross and claim asylum should the policy come to end. Many of these individuals are as little as hours away from the border – while others planning to migrate are within a few-days trip, an official familiar with discussions told CNN.

With more than 3 million refugees dispersed among Europe from Ukraine, Secretary of State Antony Blinken said ‘the numbers are staggering.’

‘This is the largest refugee crisis in Europe since World War II,’ Blinken said.

He told reporters that he spoke with G7 counterparts Thursday and that they discussed a coordinated approach to help refugees fleeing Ukraine.

Biden gave Ukrainians fleeing the war hope that they would be able to come to the US, saying on March 12: ‘We’re going to welcome Ukrainian refugees with open arms if, in fact, they come all the way here.’

Questions are emerging over whether the U.S. will actually take in these Ukrainian refugees, many of whom are fleeing Ukraine to be with family in the U.S., just to be turned away at the border.

The map shows the amount of Ukrainian refugees accepted by each nation since the war began, with some countries taking in far more than others. The most recent data of refugees available is from March 16 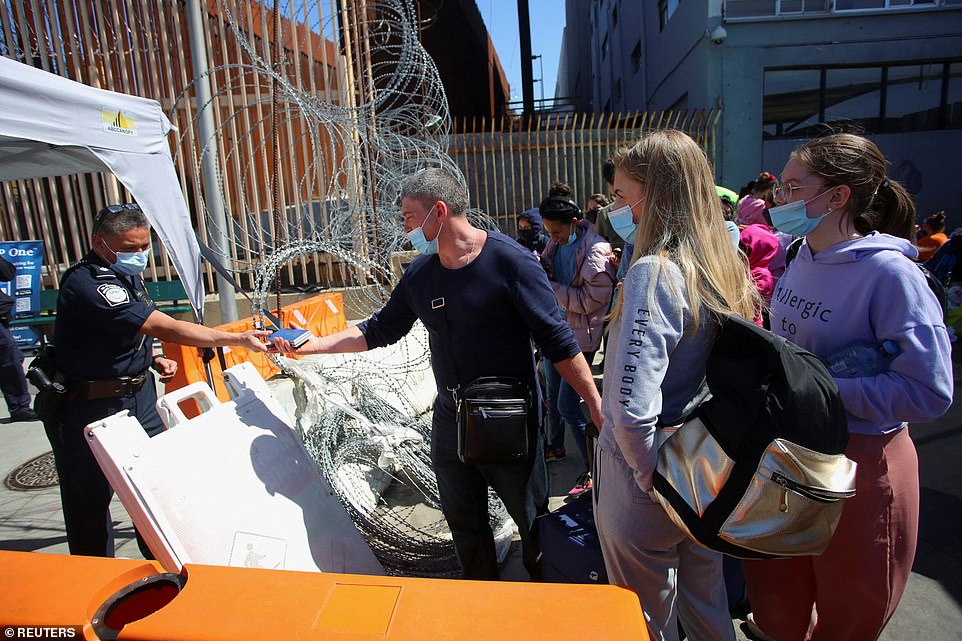 A Ukrainian family fleeing Russian aggression interacts with a Customs and Border Protect (CBP) agent at the San Ysidro Port of Entry of the U.S.-Mexico border in Tijuana, Mexico on Tuesday, March 15 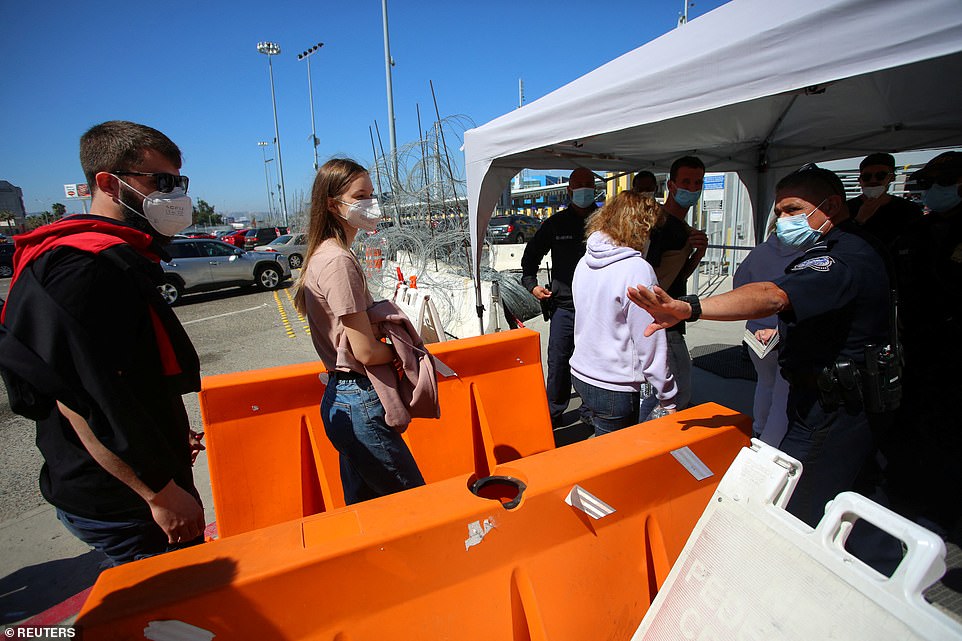 A Ukrainian family seeks humanitarian visas at the San Ysidro Port of Entry at the U.S.-Mexico border in Tijuana, Mexico on Tuesday 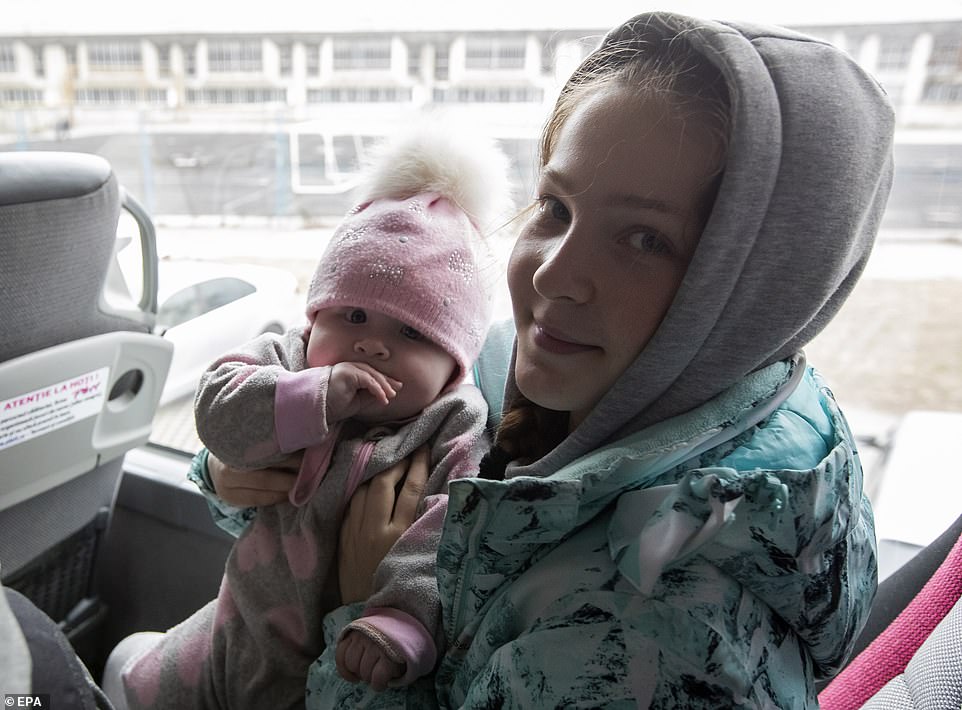 A Ukrainian girl smiles on her way rerouting to Germany from Moldova, a small country with limited resources, straining under the amount of refugees it has taken on 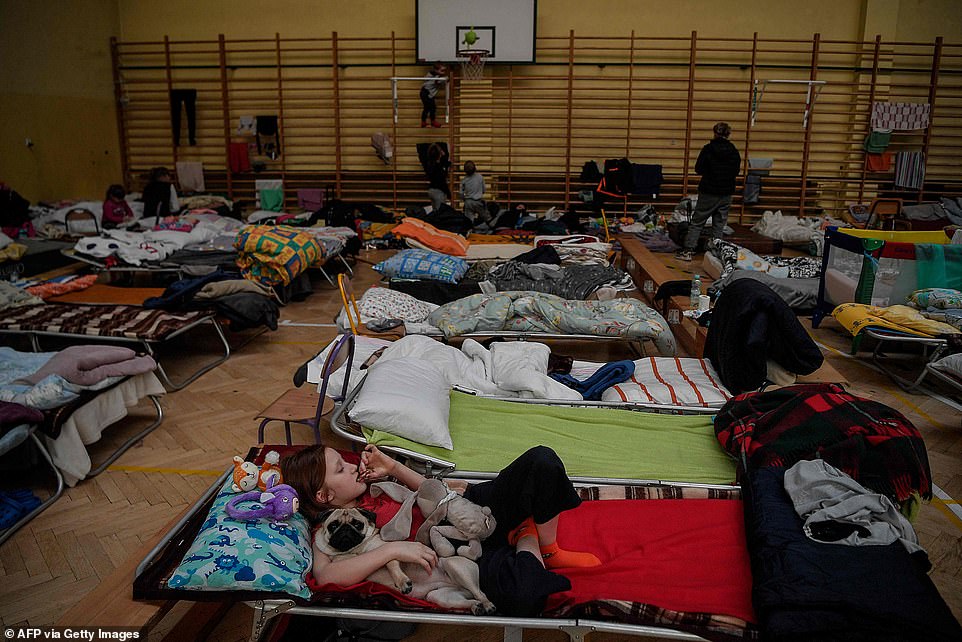 A girl rests with her dog in their temporary shelter in the gym of a primary school in Przemysl, near the Ukrainian-Polish border in southeastern Poland on March 16

As the administration struggles to find ways to deter migration and stop the surge at the southern border, it has continued use of Title 42 and is now facing calls to allow in Ukrainian refugees seeking asylum.

REFUGEE COUNT BY COUNTRY – HOW MANY IS AMERICA TAKING IN?

Russia invaded Ukraine on February 24, 2022, leading to a massive refugee crisis in Eastern Europe with millions fleeing the conflict.

In Europe, the countries surrounding Ukraine have been taking on the vast majority of refugees fleeing Putin’s savage war, with Pope Francis praising Polish people in particular for accepting over one million desperate Ukrainians into their homes.

The United Nations predicts that more than 3 million people have fled Ukraine in the more than three weeks since the invasion last month, the vast majority of which have landed in Poland.

Currently more than 1.9 million refugees have fled to Poland, while much of the rest are scattered among Romania, Moldova, Slovakia and Hungary.

While many are going to neighboring countries, more and more are arriving in the U.S. now that Ukraine faces its 22nd day of attack from Vladimir Putin.

On the aggressor side, Russia has accepted 168,858 Ukrainians fleeing its troops, while Belarus has seen 2,127 coming across the border.

A remaining few tens of thousands are split between Spain, France, Germany and the United Kingdom, which are all European countries that do not touch Ukraine’s borders.

While the U.S. has not confirmed how many refugees have asked for or received asylum, married Ukrainian-American couple Igor and Galyna Semenkova are pleaded the U.S. administration to allow their daughter Kseniia and her husband Oleksandr Isaienko into the U.S.

The Long Island couple’s daughter was living in Kyiv, Ukraine with her new husband but fled after Russian bombing started in the capital city and are stranded in northern Italy.

The UN releases refugee figures every four days, with the most recent results from March 15 showing that more than 3.1 million people have fled the country.

The figure four days earlier was 2.5 million, underlying an enormous exodus, with roughly a million people fleeing the country every week.

The UN estimates that around 12.65 million people have been affected, with numbers soaring as Russia continues to target civilians.

Some 960,000 families are now without electricity in the country and 264,000 families have been cut off from gas supplies.

Since war broke out on February 24, European countries have flung open their borders to welcome the 3million refugees who have already fled the warzone.

The UK has issued 6,100 visas under its Ukraine Family Scheme as of March 16.

Around 100,000 British households have volunteered to welcome them into their own homes.

The US has not yet confirmed how many refugees have asked for asylum or received it. 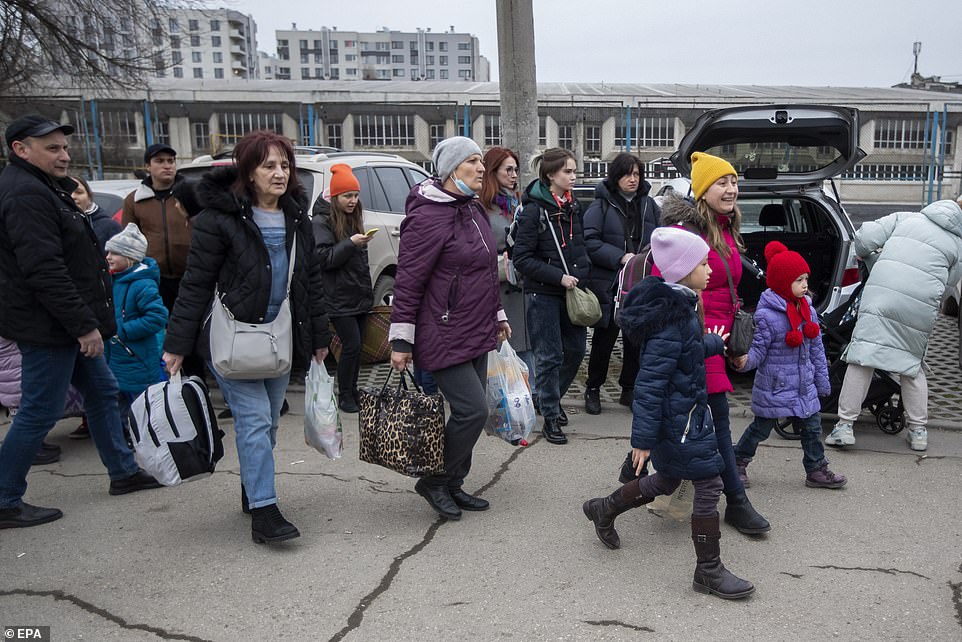 Ukrainian citizens fleeing Ukraine prepare to take a bus routing to Germany, near a refugee triage center at an atlethic sport arena in Chisinau, Moldova 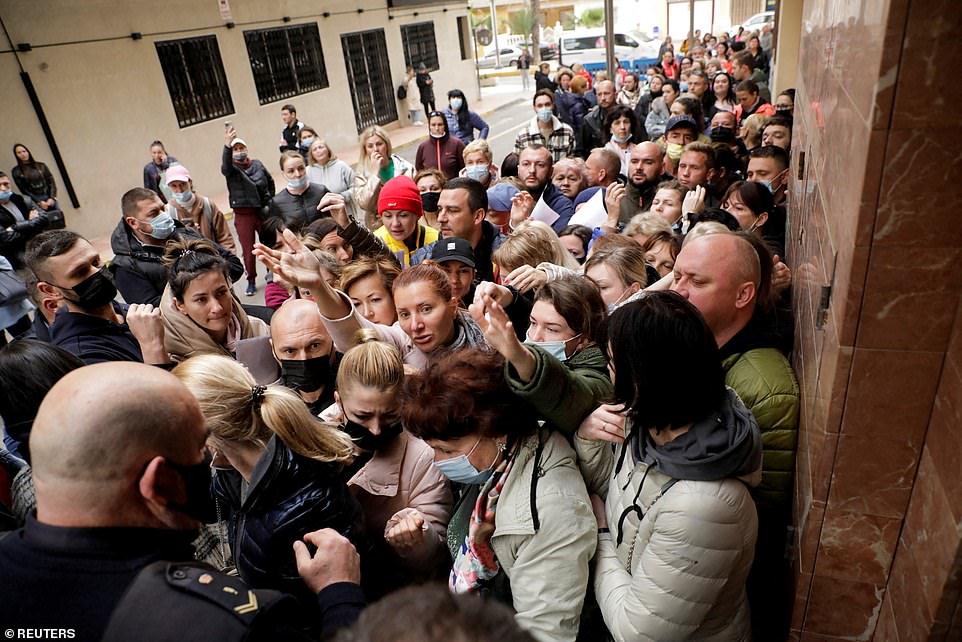 Ukrainian refugees queue to get one of the 100 daily appointments at the documentation office to apply for temporary protection approved by the European Union that allows residence and a work permit, in Torrevieja, Spain

In the meantime, Ukrainian-American families are waiting anxiously as their loved ones bounce from European country to European country, waiting for the greenlight to board a plane to the US and join them.

To enter the US, Ukrainians must first get a tourist visa, which can present challenges for those fleeing war.

Title 42 is a public health law used to detain or expel immigrants .

It is enforced by the Department of Homeland Security (DHS), despite being a heath measure.

The former Trump administration invoked section 265 of Title 42 during the pandemic, which effectively closes the border under health regulation.

Title 42 allows the DHS to expel single adults, and families, at the Southwest US border, under rules designed to protect Americans from Covid-19.

Under the order, Title 42 can also be used to expel individuals who have entered the United States.

Over 1.2 million expulsions have been carried out since the pandemic began, with the Biden administration  continuing to use the provision.

Many Ukrainians fleeing Russia’s invasion have travelled to the southern border after applying for asylum, but find themselves held under Covid-19 rules, unable to enter because of Title 42.

Mexico has a lower barrier-to-entry, and so many Ukrainians are heading to Mexico first with the expectation of being allowed into the US through the southern border after Biden’s comments.

Since October last year, 1,300 Ukrainians have presented themselves at the southern border.

Reuters confirmed to DailyMail.com after seeing State Department data, but the US government has yet to confirm the figure.

Alina Kutsenko told Newsweek in a phone interview that her cousin Natalya Skalska, her husband and their three young children were detained March 14 by US Customs and Border Protection as they tried to enter from Mexico at the border crossing in San Ysidro, California.

Another unnamed Ukrainian refugee trying to enter the southern border was transferred to an ICE detention center in Louisiana, and has been held there for almost two weeks, Newsweek reported.

The Ukrainians, planning to stay in the US until the end of the war, said they were not made aware of Title 42.

President Joe Biden has kept the Trump-era policy in place and his administration has defended it in court in order to help quell the southern border crisis as the pandemic prevails and record numbers of migrants arrive.

Immigration advocates have been calling for an end to enforcing Title 42 – even though the US is still in a state of emergency – and calls have increased this week as Ukrainians begin to arrive and request asylum, according to San Diego affiliate CBS8.

The outlet said Tijuana journalists have witnessed dozens of Ukrainian and Russian families gathering outside the US southern border and families in Tijuana claim Customs and Border Protection (CBP) agents are selective of who they let in.

No data is publicly available yet for March although the United States admitted only 514 Ukrainian refugees in January and February during Russia’s build-up to the war, according to US State Department data.

‘We commend our European Allies and partners for keeping their borders open to Ukrainian nationals and others fleeing Ukraine seeking international protection,’ said a US State Department spokesperson, responding to MailOnline.

‘We know the EU is working to rally support for refugees from and those displaced within Ukraine,’ the spokesperson added. 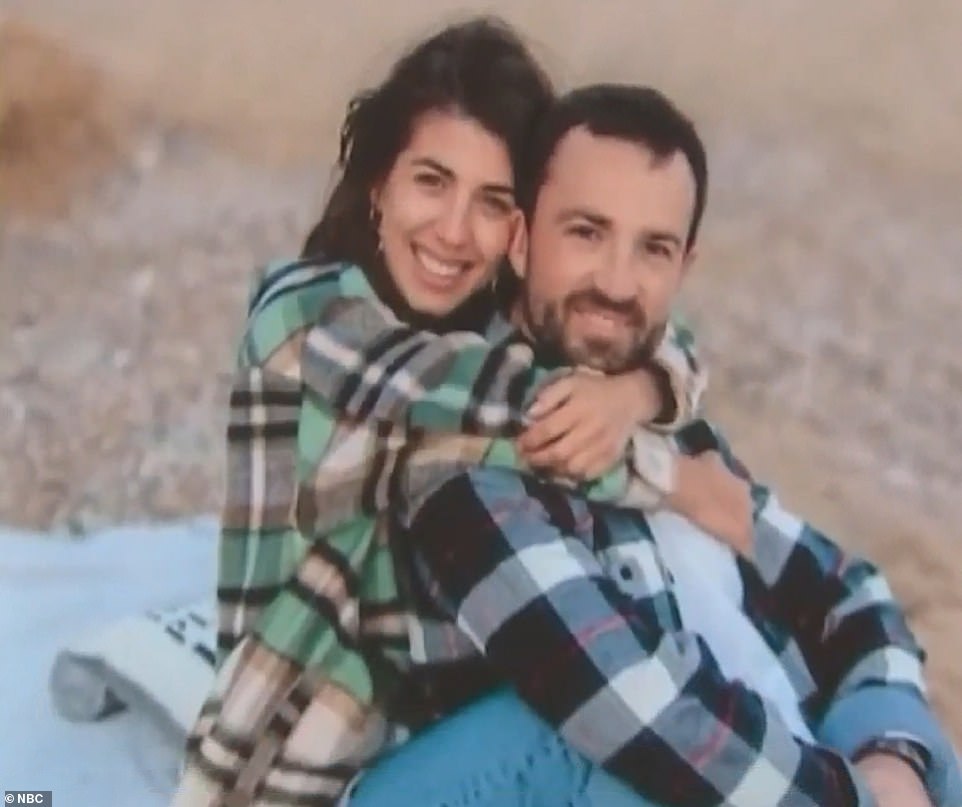 Kseniia and her husband Oleksandr Isaienko are stuck in northern Italy after fleeing Kyiv despite her entire family living in Long Island with green cards. They had their ESTA visa applications rejected 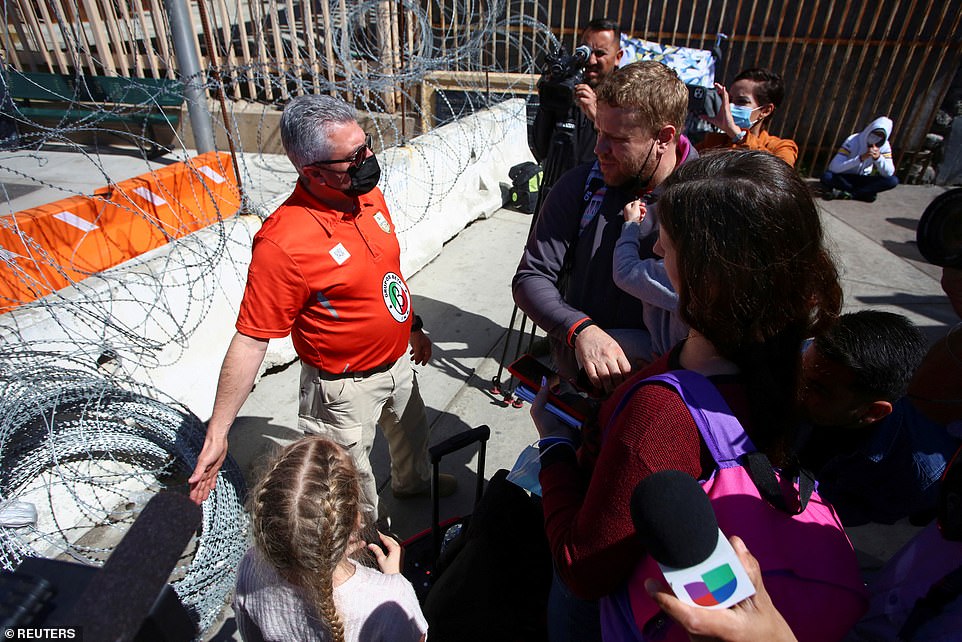 A Ukrainian family listen to an agent of the Mexican immigrant welfare agency Grupo Beta while waiting for a humanitarian visas outside the San Ysidro Port of Entry at the US-Mexico border in Tijuana on Friday, March 11 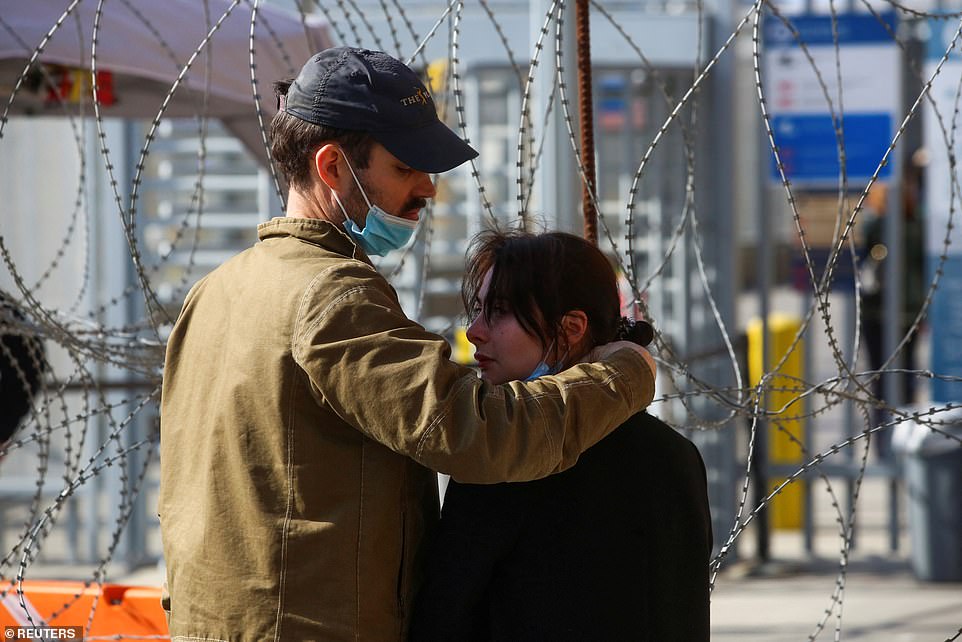 Ukrainian refugees are arriving at the US southern border seeking asylum but are being turned away due to Title 42, a provision that allows migrant expulsion due to the ongoing coronavirus pandemic. Pictured: a Ukrainian woman and her boyfriend wait for humanitarian visas outside the San Ysidro Port of Entry in Tijuana, Mexico on March 10

‘This challenge is likely to escalate in the near future, and the United States stands by to support our Allies and partners as they welcome and care for people in their hour of need.’

Immigration lawyers in San Diego argue the Title 42 policy is no longer needed and is leading to inhumane treatment of migrants and asylum-seekers at the border as the administration claims it’s necessary to prevent the spread of COVID-19.

The Biden administration already ended the policy for children crossing without their parents, but as restrictions in the US ease, there are increased calls to ditch the policy altogether.

‘This is actually an inhumane policy and people are calling to cancel it and it’s not safe for families who are fleeing their country and are trying to look for peace,’ Immigration Lawyer Jacob Sapochnick said.

Sapochnick, who has been helping Ukrainian families, says Border Patrol agents are taking advantage of Title 42 provisions and turning families away.

‘The moment they reach the US soil and they say they are here for asylum, they can’t send them back. They have to actually process them and go through the critical interview,’ Sapochnick detailed.

‘However, they are just sending them back and they are not supposed to do that.’

The Department of Homeland Security did not respond to request for comment.