By James Franey For The Mail On Sunday

Ukraine last night sang the praises of its army for ‘expelling’ Russian invaders from the city of Kharkiv.

In a further setback to Vladimir Putin, officials said the Russian President’s forces were withdrawing from the north-eastern city to focus on defending supply routes to the embattled Donbas region.

Heralding victory in the battle for Kharkiv, mayor Ihor Terekhov told the BBC there ‘were no Russian troops inside the city. Russian tanks and armoured fighting vehicles were eliminated by Ukrainian fighters’.

Sweet sounds: Ukrainian singer Svyatoslav Vakarchuk sings during The Music of the Resistance concert at an art gallery in Kharkiv yesterday

‘And due to the efforts of the Kharkiv territorial defence and Ukrainian armed forces, the Russians have now withdrawn far from the city – towards the border.’

He added: ‘People are gradually coming back to the city. We are providing water, gas and electricity supply to all the citizens.

However, unfortunately many residential buildings are destroyed or damaged. So, in the future we will have to do huge reconstruction.’

An indication of a return to some normality came last night as a concert entitled The Music of the Resistance was held at a Kharkiv art gallery. 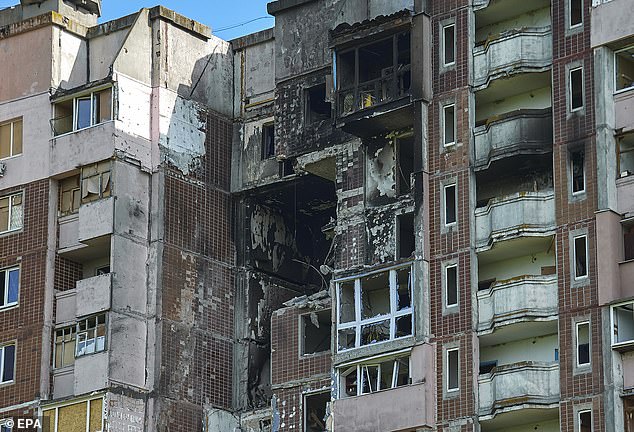 A damaged flat of a shelled residential building pictured on the outskirts of Kharkiv, Ukraine, yesterday 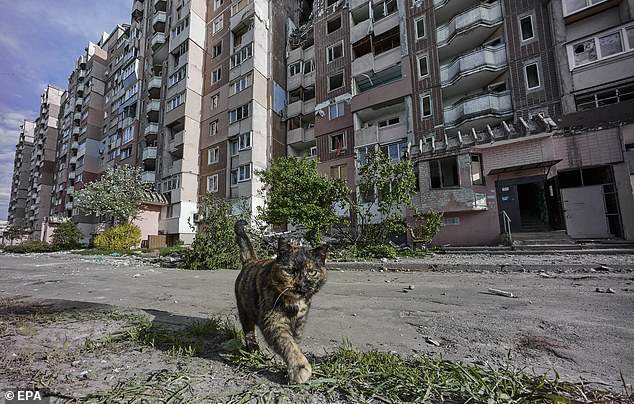 A cat pictured as it strolls past a shelled residential building on the outskirts of Kharkiv, Ukraine, yesterday

The Institute for the Study of War, a Washington-based think-tank, said the Ukrainian military ‘appears to have won the battle of Kharkiv’, adding: ‘Ukrainian forces prevented Russian troops from encircling, let alone seizing Kharkiv, and then expelled them from around the city.’

However, air raid sirens blared last night as officials detected the threat of more attacks on the city, Ukraine’s second biggest and a major strategic target for Putin.

Many of its 1.4 million residents fled before the Russian assault, but yesterday trains were packed with people returning home.

The city, only 30 miles from the Russian border, has withstood more than two months of bombardment.

Meanwhile, Ukrainian forces have reportedly launched a counter-offensive in Izyum, in the east of the country, which was seized by Russia on April 1.