UK’s best and worst places to take your driving test

Revealed: UK’s best and worst places to take your driving test including one centre in Birmingham where less than a third of learners pass first time

Learner drivers in Birmingham have been warned they face the most difficult task in passing their test as less than a third of candidates in the city are successful first time out.

Driving lessons and tests are currently suspended due to the ongoing Covid-19 lockdown, but thousands of Britons are looking at learning the vital skill, especially as social distancing rules are likely to last for several months.

However, data supplied by the Driver and Vehicle Standards Agency (DVSA)  has shown the massive variation in pass rates across the country’s 324 driving test centres.

Wales, Scotland, Yorkshire and Northumberland are the best places to sit your driving test, while Birmingham, London, Manchester and Leicester are among the worst 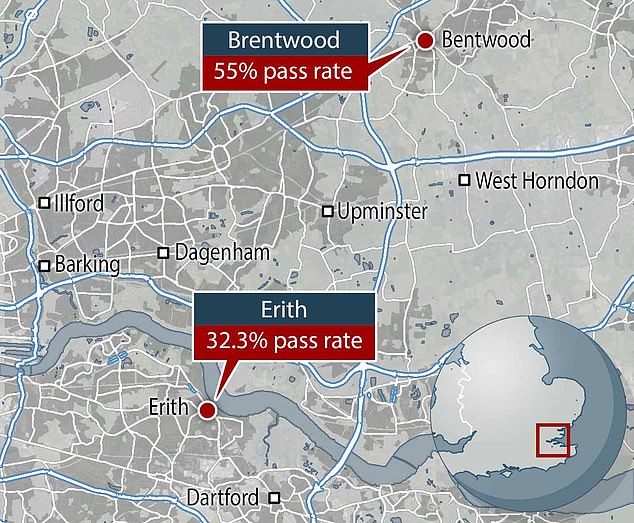 Travelling to a neighbouring test centre can dramatically increase the chance of success as the pass rate in Erith is just 32.3 per cent, while over in Brentwood, on the other side of the River Thames, it increases to 55 per cent 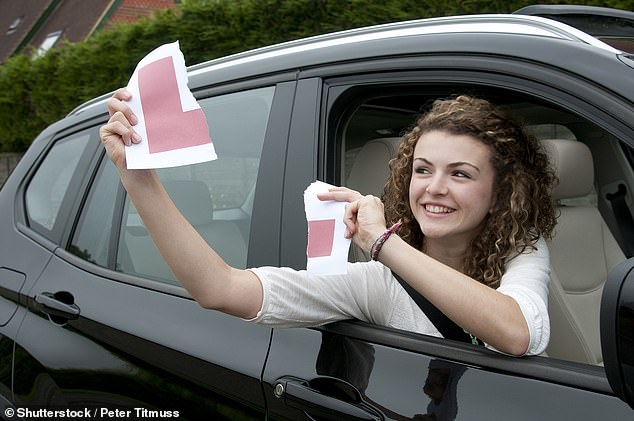 Learner drivers face a significantly better chance of passing their tests if they choose a rural testing centre and avoid built up towns and cities, according to new figures

According to the most recent figures, which have been compiled by insurance company Go Compare, Llandrindod Wells in Powys is the best place to attempt the driving test, with a first time pass rate of 76.3 per cent.

Motorists in one Birmingham test centre have a first time pass rate of 29.3 per cent.

According to analysts at the insurance company, ‘Scotland, Wales, Northumberland and Yorkshire have the highest pass rates.

Yet, in London, which features among the worst places to sit your test, the pass rate varies widely, with a 55 per cent pass rate in Brentwood, falling to 32.3 per cent in Erith.

The UK Driving Test report compiled by GoCompare found that on average drivers spend £647 and take 22 lessons to secure the freedom of the roads on the first time of asking.

Those who need multiple attempts can spend thousands of pounds, so determining ‘a friendly driving test centre’ can save significant money.

GoCompare’s driving expert Matt Oliver said: ‘Preparation is always the key when it comes to tackling any challenge. But there’s no harm in looking at extra ways to boost your chances, and choosing a quieter route can keep your nerves at a minimum.

‘The most common reason for failure in driving tests is responding incorrectly at lights. At busy junctions, it’s easy to lose your concentration when surrounded by different distractions – choosing a quieter location is a good way to limit this risk.

‘To make sure you’re prepared, try to practise in a variety of conditions. Once you’ve chosen your test centre, drive the routes as often as possible, so you can get used to the trickier roads.’

1. Arrive at least 20 minutes early for your test following an early night in bed. Rushing at the last minute will increase stress and the potential for failure

2. Try to use the same car you have been taking lessons in as you will be more familiar with the controls and able to show the examiner how to operate the vehicle safely

3. Don’t worry about minor mistakes as you are allowed to make 15 before you fail.

4. Try and think of the test as an ordinary driving lesson to reduce the tension

6.  Practice learning to drive in all weather conditions as you cannot control what happens on the day of the test

7. Exaggerate your neck movements so the examiner can see you are making use of your mirrors

8. Learn the Highway Code. You need to know what all the signs mean even though you have already passed your driving test

9. Do not try an look at the examiner’s clipboard as they mark your driving. Not looking at the road is dangerous and will lead to failure

10. Anticipate the hazards ahead. Even if you’ve driven the test route a dozen times, watch out for children running out on the road or rogue cyclists