Britain should have done mass coronavirus testing on the public at the beginning of the crisis and carried it on, the Government’s chief scientist has said.

Sir Patrick Vallance, the chief scientific adviser to Downing Street, admitted yesterday that it ‘would have been beneficial’ to get a handle on testing faster.

When the first cases of the coronavirus appeared in the UK every person suspected of having it was being tested and any positive cases would be quarantined in a specialist disease hospital.

As the infection spread, however, the Government gave up trying to test everyone.

On March 12, officials announced testing would be limited to patients and staff in hospitals so that authorities could focus on preparing hospitals for disaster.

That policy continued for six weeks until April 28, when testing was expanded to key workers and over-65s with symptoms, and later to those without signs of the illness.

Speaking to MPs in Parliament’s Health Select Committee yesterday, Sir Patrick said: ‘I think that probably we, in the early phases – and I’ve said this before – I think if we’d managed to ramp testing capacity quicker it would have been beneficial.

‘For all sorts of reasons that didn’t happen.’

One former World Health Organization director, commenting on the lack of focus on testing, said: ‘This should not have happened’.

The UK Government has only allowed members of the public to get coronavirus tests from last week, and there are still restrictions on who is eligible, even if they have symptoms (Pictured: A woman has a nasal swab taken at the Royal Papworth Hospital in Cambridge) 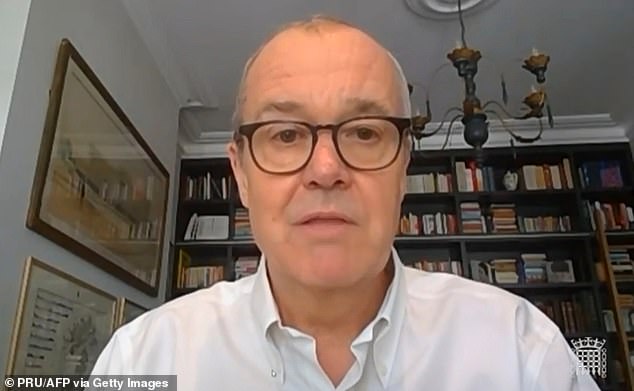 Sir Patrick Vallance, the UK’s chief scientific adviser, admitted it ‘would have been beneficial’ for the UK to have testing ramped up weeks earlier than it did

Sir Patrick added: ‘I think it’s clear you need lots of testing for this but, to echo what Jenny Harries has said, it’s completely wrong to think of testing as the answer.

‘It’s just part of the system that you need to get right. The entire system needs to work properly.’

Dr Jenny Harries, the deputy chief medical officer for England, has explained that the UK stopped its policy of testing everyone so officials could focus on preparing the NHS.

When officials realised Britain was on the cusp of a full-blown epidemic the Government scrambled to try and prepare the already-crumbling NHS for patients.

Videos and reports emerging from Italy, which battled what is still perceived as the worst outbreak in the world, showed patients in corridors and hospitals overwhelmed with the sick and dying.

Afraid Britain faced the same fate, the Government rushed to cancel all non-urgent operations, empty hospital wards and buy as many ventilators as it could get its hands on.

In the process, testing, tracking and tracing of people infected with the virus in the community fell by the wayside.

Professor Chris Whitty, the chief medical officer, said on March 12: ‘It is no longer necessary for us to identify every case’.

Throughout March, the Government never tested more than 9,000 people in a day, and the number hovered below 15,000 until mid-April.

During that time, hundreds of thousands of people – potentially millions – are believed to have been infected with the coronavirus and almost 18,000 people had died by the first time the Government managed to test 15,000 in a day.

Dr Tedros Adhanom Ghebreyesus, its director-general, said not doing so would be like ‘trying to fight a fire blindfolded’.

A former director at the WHO and now academic at University College London, Professor Anthony Costello, said the UK should never have let testing slip.

He said on Twitter: ‘On March 12 we stopped all community testing at a time when there were less than 10 deaths and only 500 confirmed cases countrywide.

‘Most local authorities had tiny numbers of cases. Before we stopped we were only doing 1,500 tests per day. This should not have happened.

‘And contact tracing could have easily continued with local authority public health teams, GPs, environmental health officers and trained volunteers. Except maybe in London and W Midlands. This would have reduced spread.’

Sir David King, a chemist at the University of Cambridge, agreed that testing could have spared the UK some of the devastation it has gone through.

Asked whether he thought testing could have cut the death toll he told the BBC: ‘I don’t think there’s any might about it, of course it would.’