A record high 854 coronavirus deaths have been announced in the UK today, taking the total to 6,227.

NHS England has confirmed 758 people have died, with authorities in Scotland, Wales and Northern Ireland announcing a further 96 between them.

Scotland revealed 74 more deaths had been recorded in the past 24 hours, along with 19 in Wales and three in Northern Ireland.

The death toll is more than double the number announced yesterday and marks a new low for Britain in its battle against the epidemic.

Scientists have, in recent weeks, predicted that the peak of the outbreak would come at Easter, suggesting the nation is in for a turbulent seven days.

Today’s statistics come as Prime Minister Boris Johnson remains in intensive care in St Thomas’ Hospital in London after being transferred there last night. His spokesman says, however, that he is in good spirits and breathing on his own.

Although the surge in the number of deaths recorded today is a drastic rise on the 439 which emerged yesterday, a delay in recording data could be to blame.

Some of the fatalities announced each day actually happened 10 days ago or more but had not been recorded earlier because of paperwork delays.

And deaths being announced today are likely from patients who were infected weeks ago, meaning they do not indicate that the virus is spreading faster than it was.

In Spain, officials have admitted that deaths tend to build up over the weekend, get missed from statistics released on Monday, and then surge later in the week.

Figures in the UK show that death numbers tend to dip on Mondays before a spike on Tuesday. Last week, however, the number continued to rise all week from Tuesday onwards.

Spain’s deputy emergency health director, Maria Jose Sierra, insisted Spain was still on the right track despite a rise in the number of deaths and new infections today.

She blamed the increase on an accumulation of cases which had not been reported from the weekend. It is not clear whether the same thing is happening in the UK.

Ms Sierra said: ‘This is due to the weekend adjustment. It is still a downwards tendency.’ 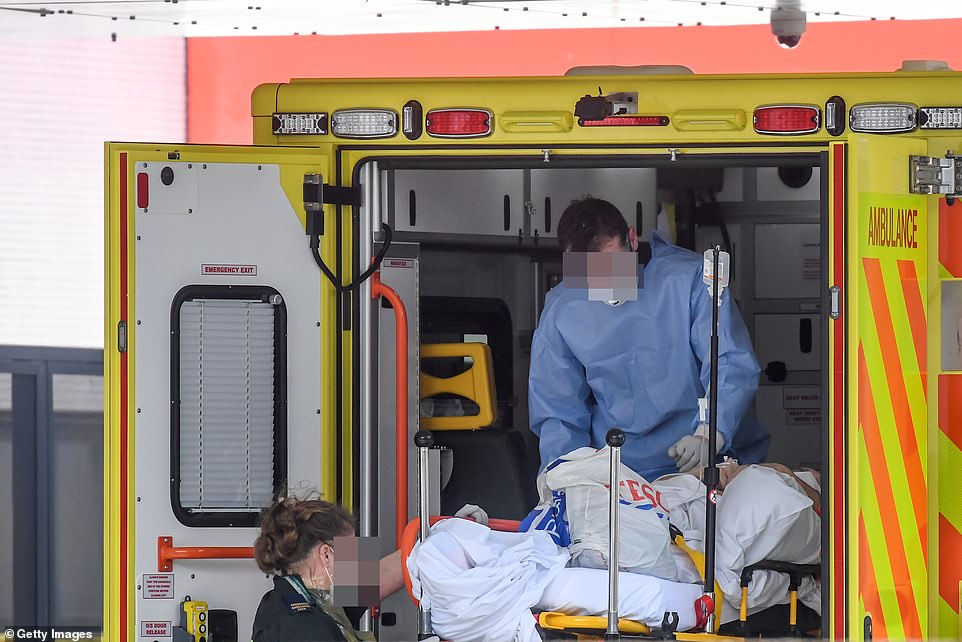 Medical staff are pictured in an ambulance outside St Thomas’ Hospital in London, where Prime Minister Boris Johnson is being treated

In brighter news for Britain this afternoon, Prime Minister Boris Johnson’s spokesperson has confirmed he is still in a stable condition and breathing on his own.

The premier was taken into intensive care in Westminster last night at around 7pm because his fever had lasted for more than 10 days.

His spokesperson says he is still ‘in good spirits’ and his having ‘standard oxygen therapy’, which is believed to be mild therapy via a mask or nasal tube.

He has not been diagnosed with pneumonia, Downing Street confirmed.

The 55-year-old’s spokesman said today: ‘The Prime Minister has been stable overnight and remains in good spirits.

In a round of broadcast interviews this morning, Cabinet minister Michael Gove played down concerns that the Government will be paralysed with the leader out of action, insisting that Mr Johnson had already been on a ‘stripped back diary’ for days and ‘Cabinet is the supreme decision making body’,

However, within hours it had emerged that Mr Gove himself had also been impacted by coronavirus, as he has gone into self-isolation following a family member displaying symptoms.