UK’s coronavirus outbreak was even deadlier than SAGE’s ‘worst-case scenario’ which predicted 50,000 deaths by September and easing lockdown without robust contact tracing scheme will push R above 1, government papers reveal

SAGE estimated 50,000 people could die by September if compliance with lockdown was low, in a report submitted to ministers on March 29.

But as of today the official Covid-19 death toll already stands at 44,000, but separate government figures show the UK topped the dreaded 50,000 mark a month ago.

Another scientific report presented to ministers warned that easing lockdown without a robust track and trace system would push the reproduction rate above 1.

The paper was handed to Number 10 on May 27, four days before the Government sent a chunk of the workforce back to work and let some non-essential shops reopen.

Writing in the study, SAGE said: ‘Without a highly effective system of testing, tracing and isolating, there is little headroom for loosening measures without R returning above 1.’

Nine documents were today published by the Government Office for Science, which is headed by Sir Patrick Vallance, England’s chief scientific adviser.

They are among dozens in a tranche of papers presented to SAGE over recent months to help guide ministers through the crisis.

SAGE estimated 50,000 people could die by September if compliance with lockdown was low, in a report submitted to ministers on March 29 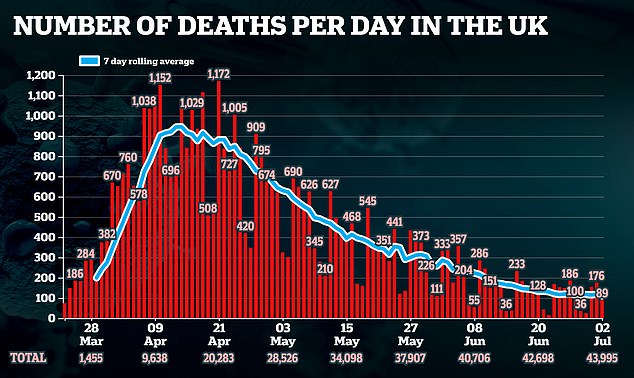 But, as of today, the official coronavirus death toll in Britain already stands at nearly 44,000

SAGE’s 50,000 deaths prediction came on March 29, five days after the UK went into lockdown and cases were doubling every two to three days.

On the day the scientific paper was published, the UK’s coronavirus death toll stood at 1,669.

It estimated that cases would only rise to 50,000 if half of households ignored stay-at-home measures and three in 10 people with symptoms disregarded them.

The report estimated that there would be no Covid-19 deaths by July 7 if there was good compliance from the British public.

SAGE said this prediction relied on 75 per cent of families adhering to household quarantine and 70 per cent of symptomatic cases self-isolating.

Oxford University surveys have concluded that about 70 per cent of Britons have followed the Covid rules to the letter of the law through the crisis.

Figures by the Office for National Statistics, a non-ministerial Government department, predict the true death rate to be well beyond 50,000.

The ONS includes deaths that are suspected Covid. Many cases and deaths early in the crisis were missed because of a lack of widespread testing.

SAGE scientists have since admitted publicly that they underestimated how many cases had already been imported into the UK from Europe by mid-March, which may explain the low estimate.

A separate paper submitted to ministers in May warned that the R rate – the average number of people a coronavirus patient infects – would shoot above 1 unless contact tracing was up to scratch.

Keeping the R below 1 is critical because it prevents cases from growing exponentially and the epidemic spiralling back out of control.