Britain’s coronavirus outbreak is still shrinking by up to 5 per cent a day, according to official data released today — but SAGE has warned the R rate could be above one in the South West of England and London.

The Government’s scientific advisory panel revealed the UK’s current growth rate — how the number of new cases is changing day-by-day — is between minus five and minus one per cent.

It is more confirmation the crisis is still petering out and suggests the reopening of pubs, restaurants, hairdressers and beauty salons on July 4, dubbed ‘Super Saturday’, has not triggered a resurgence yet.

But the figures show the UK’s outbreak is now be shrinking at a slightly slower speed because the growth rate has crept up from last week’s rate of minus 5 per cent to minus 2 per cent per day.

Scientists today said they were ‘cautiously optimistic’ about the data, which they say shows ‘there is no indication the epidemic has gotten out of hand as a result of the easement’ of lockdown.

But they warned Brits ‘must stay completely vigilant’ because a lag in the statistics means it is at least two weeks behind and it could take until next week for any spike to become visible.

Separate figures released by SAGE today shows the virus’s reproduction rate — the average number of people each Covid-19 patient infects — is still between 0.7 and 0.9 as a whole for the UK, meaning it hasn’t changed in two months.

But SAGE admitted the R could be as high as 1.1 in the South West of England, where Britons have been flocking for stay-cations to enjoy the coastline of Cornwall, Devon and Dorset, and in London, where pubs have been rammed with customers after reopening earlier this month.

For England as a whole, the R is slightly higher than the rest of the country, with the reproduction number hovering between 0.8 and 1. Keeping the rate below one is considered key because it means the outbreak is shrinking as not everyone who catches it passes it on.

It comes after Boris Johnson today urged all workers to return to offices in August as he set out his timetable for life in the UK to return to normal by Christmas. In a Downing Street press conference, he revealed restrictions on the use of public transport in England are being dropped immediately with trips on the train and bus to no longer be viewed as the option of last resort. 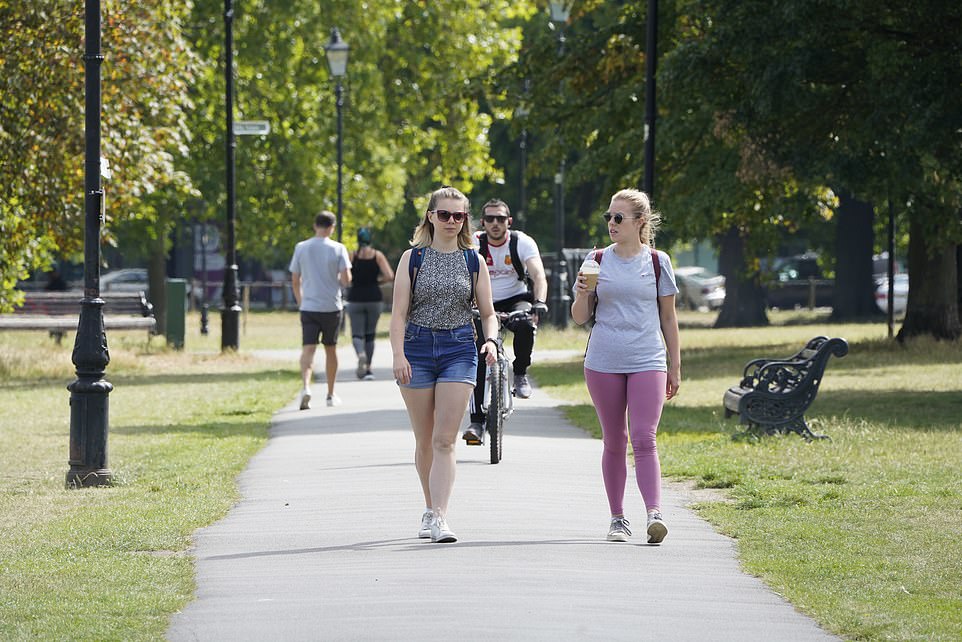 Two women walk through Clapham Common in London today, without wearing face masks. It comes as SAGE has warned the R rate could be above one in the South West of England and London 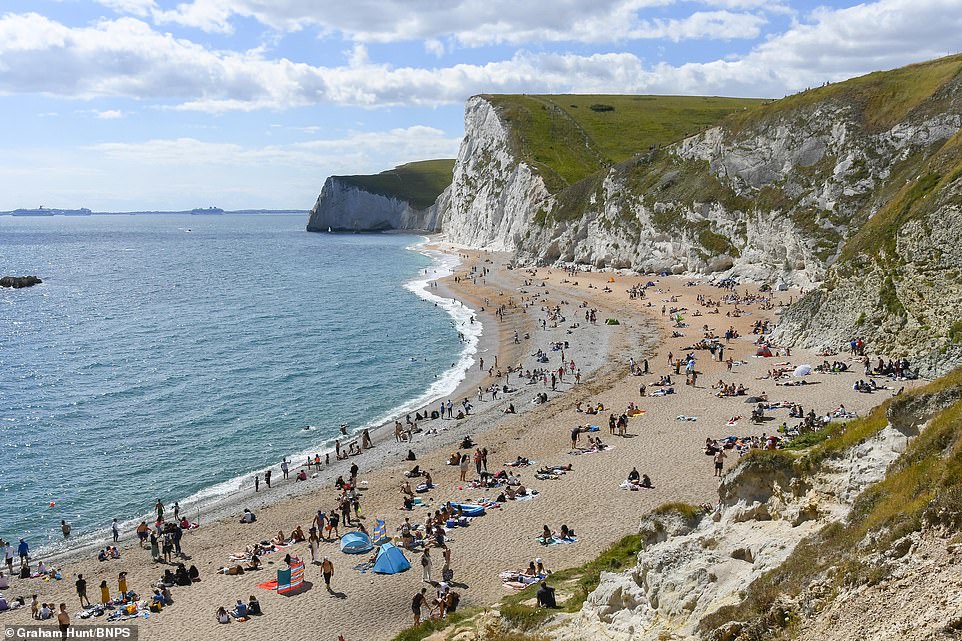 SAGE admitted the R could be as high as 1.1 in the South West of England, where Britons have been flocking for stay-cations to enjoy the coastline of Cornwall, Devon and Dorset (pictured, sunbathers at Durdle Door), and in London, where pubs have been rammed with customers after reopening earlier this month.

Reacting to the findings, Dr Daniel Lawson, a statistician at the University of Bristol, said: ‘These data allow us to be cautiously optimistic. There is no indication that the epidemic has gotten out of hand as a result of the easements.

‘However we must stay completely vigilant because there is a delay of at least two weeks before an increase in the reproductive rate of the virus is visible in the data.’

The figures come as beauty salons, outdoor pools and other businesses were allowed to reopen to the public with a further relaxation of lockdown restrictions.

HOW HAS THE GROWTH RATE CHANGED?

In the North East and Yorkshire, the growth rate is unchanged at minus 5 per cent to minus 1 per cent. Its R number is 0.7-0.9. 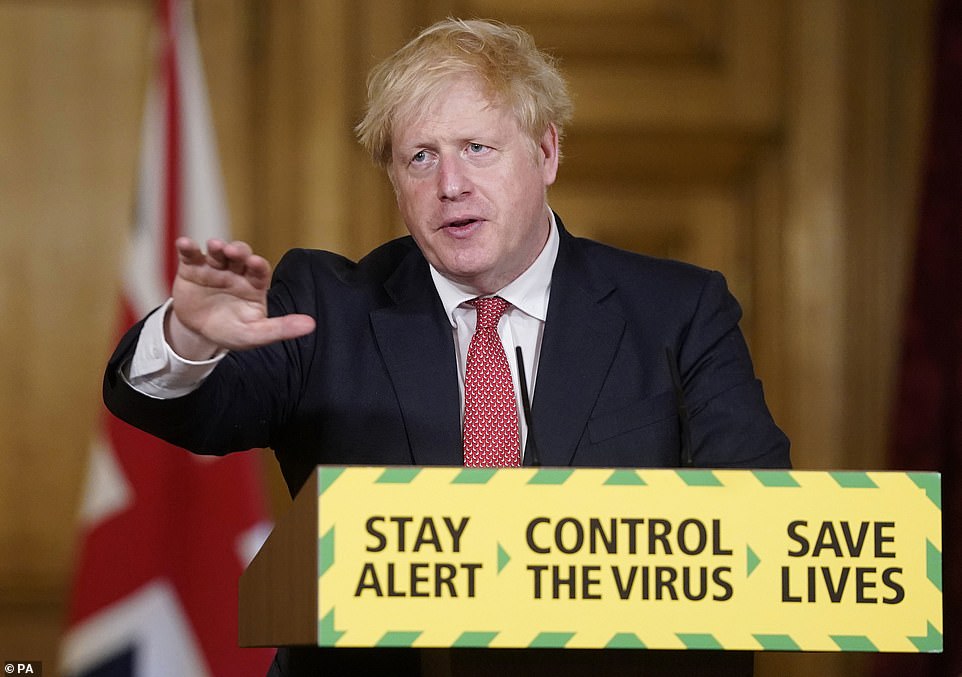 Next week: New local lockdown draft powers for ministers will be published to allow them to issue stay at home orders and travel restrictions.

August: New rules on working from home to be introduced to encourage more workers to return to their offices. Remaining leisure facilities like bowling alleys, casinos and skating rinks will be able to reopen from August 1.

November: All outstanding restrictions to be reviewed and eased in November at the earliest and ‘possibly in time for Christmas’.

An R of 1 means the coronavirus spreads one-to-one and the outbreak is neither growing nor shrinking. Higher, and it will get larger as more people get infected; lower, and the outbreak will shrink and eventually fade away.

At the start of Britain’s outbreak it was thought to be around 4 and tens of thousands of people were infected, meaning the number of cases spiralled out of control.

The R has now been between 0.7 and 0.9 since the end of May, according to the Government, but experts say it will start to fluctuate more as the number of cases gets lower.

The fewer cases there are, the greater the chance that one or two ‘super-spreading’ events will seriously impact the R rate estimate, which are at least three weeks behind.

Sir Patrick Vallance, the Government’s chief scientific adviser, explained last month that the UK is approaching the point where the R will no longer be an accurate measure for this reason.

The Scientific Pandemic Influenza Group on Modelling (SPI-M) – a subgroup of SAGE – use data on the number of Covid-19 deaths and positive tests to work out how quickly outbreaks are growing. Monitoring confirmed cases, hospitalisations and deaths is a more accurate way to identify local hotspots, they say.

As the number of people with the virus falls, the data measuring them will be more volatile and affected by small outliers or unusual events. A large margin of error could mean one ‘super-spreading’ event, when one person infects a lot of others, could send the R rate for one area soaring, mathematicians warn.

R rates also fluctuate depending on mobility, and are likely to shoot up when lockdown eases because infected patients will come into contact with more people, on average – especially if they show none of the tell-tale symptoms. But a temporarily high R rate is not necessarily cause for concern if the actual number of infections stays low. 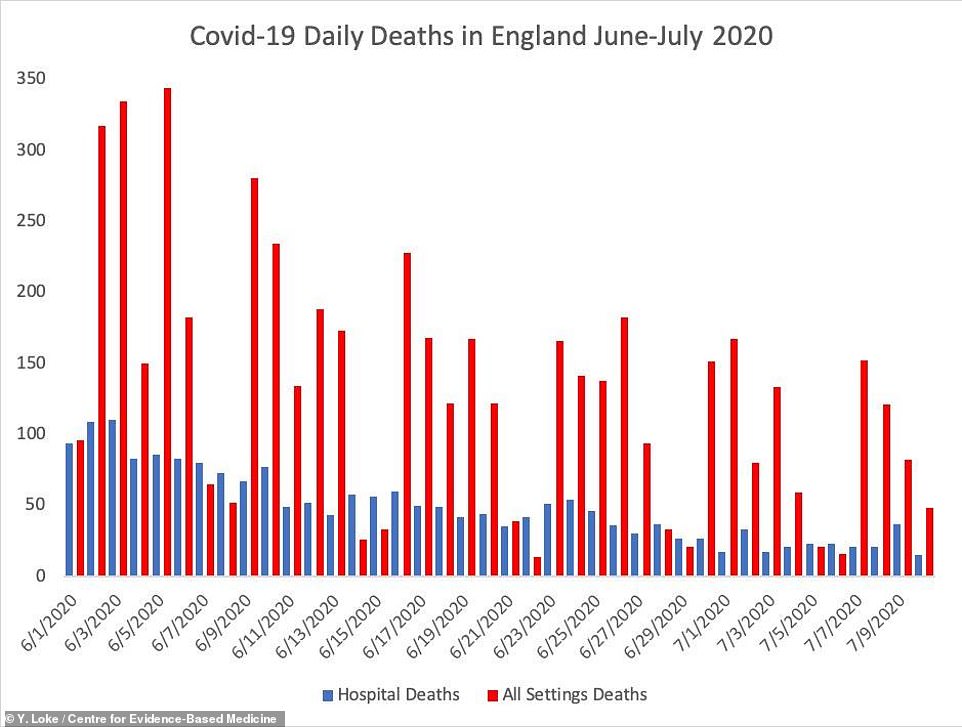 Health Secretary Matt Hancock today ordered Public Health England to review the way it counts deaths because of a ‘statistical flaw’ that means officials are ‘over-exaggerating’ the daily toll.

PHE counts people as victims if they die of any cause any time after testing positive for Covid-19 – even if they were hit by a bus months after beating the life-threatening infection, top academics revealed last night.

The method is likely why the daily fatality tolls are not dropping quickly in England because survivors never truly recover from the disease as their deaths are blamed on the coronavirus – regardless of their real cause.

One of the leading experts who uncovered the flaw told MailOnline his ‘best guess’ was that more than 1,000 people have had their deaths wrongly recorded as caused by Covid-19.

Dr Yoon Loke, a pharmacologist at the University of East Anglia, warned that it is ‘not a good way of collecting data’, has had a significant impact in the past two months and is happening because PHE ‘chose a quick and easy technique’.

And the daily death tolls may not hit zero ‘for months to come’ because of a long tail of elderly people who beat Covid-19 but will die of other causes, Dr Loke added. He uncovered the flaw alongside Oxford University’s Professor Carl Heneghan.

Dr Loke said: ‘By this PHE definition, no-one with Covid in England is allowed to ever recover from their illness.’

Prime Minister Boris Johnson confirmed in a press conference today that the Health Secretary has ordered PHE to review the way it is counting people’s deaths.

It comes after a string of mistakes at PHE, including stopping testing and tracing at the peak of Britain’s outbreak. Tory MP David Davis this month told MailOnline the organisation had ‘made a complete mess’ of Covid-19 testing.

But if 995 of them infect 0.8 people each, on average, but five of them don’t realise they are ill and infect 10 people each, there are now a total of 846 extra patients. This means the R rate is 0.846 – a marginal increase.

It comes as Boris Johnson today announced he is aiming for life in the UK to return to something close to normal by Christmas as he said workers will be encouraged to stop working from home from August.

The Prime Minister today used a Downing Street press conference to set out his timetable for the further easing of lockdown measures.

He said restrictions on the use of public transport in England are being dropped from today with trips on the train and bus to no longer be viewed as the option of last resort.

He said the Government will publish new guidance applying from August on the crunch issue of working from home in the hope that more employees will physically return to their desks to give the economy a much needed boost.

He made that pledge despite Sir Patrick Vallance, the Government’s chief scientific adviser, warning yesterday that there was ‘absolutely no reason’ to change the policy.

Meanwhile, the Prime Minister said the Government is targeting the reopening of stadiums in the autumn with audiences potentially returning to football matches and outdoor gigs in October.

Crucially, the PM also said the Government is hoping to review all the remaining ‘outstanding restrictions’ in the coming months in order to allow a ‘more significant return to normality from November’ and ‘possibly in time for Christmas’.

However, Mr Johnson insisted that all of the proposed changes would only go ahead if the spread of coronavirus continues to fall and that ‘we will not hesitate at any stage to put on the brakes’ if there is an increase in infections.

He stressed the UK must be prepared for a second wave in the winter as he announced £3 billion of extra funding for the NHS and vowed new powers to enable ministers and councils to impose strict local lockdowns.

He also pledged to increase the UK’s daily coronavirus testing capacity to 500,000 a day by the end of October with the NHS Test and Trace programme tasked with playing a key role in stopping the spread of the disease.