‘Look, it’s where the princesses live!’ my five-year-old daughter gasps, wide-eyed and grinning from ear to ear as she excitedly breaks into a run.

We really can’t miss the 189ft-high pretty pink, blue and golden turrets of the moat-surrounded Cinderella-inspired castle emblazoned with a huge ’50’, as we make our way into Walt Disney World’s Magic Kingdom.

Even as adults, the iconic structure that’s embedded in a thousand childhood memories is an impressive sight to behold – a symbol of magical adventures and fantasy lands.

Carol Driver and her family visit Walt Disney World’s Magic Kingdom on their first-ever trip to Orlando, Florida. Their trip coincides with the theme park’s 50th-anniversary celebrations, which end in March 2023. Carol downloads the Disney Genie+ service to plan her visit – its app offers a map, ride waiting times, show times, and allows you to check dining availability and order food

It’s our first holiday in Orlando, Florida, and has taken weeks of planning in an attempt to make sure we make the most of our time here, for the 50th-anniversary celebrations of The Most Magical Place on Earth.

And we’re glad we put in the effort, especially as, when we arrive, it’s clear to see that there are many very dedicated Disney superfans who know the parks like the back of their hands.

First thing first – our accommodation. We wanted to stay close to the parks, but somewhere that would also allow us to easily check out some of Florida’s other incredible attractions. 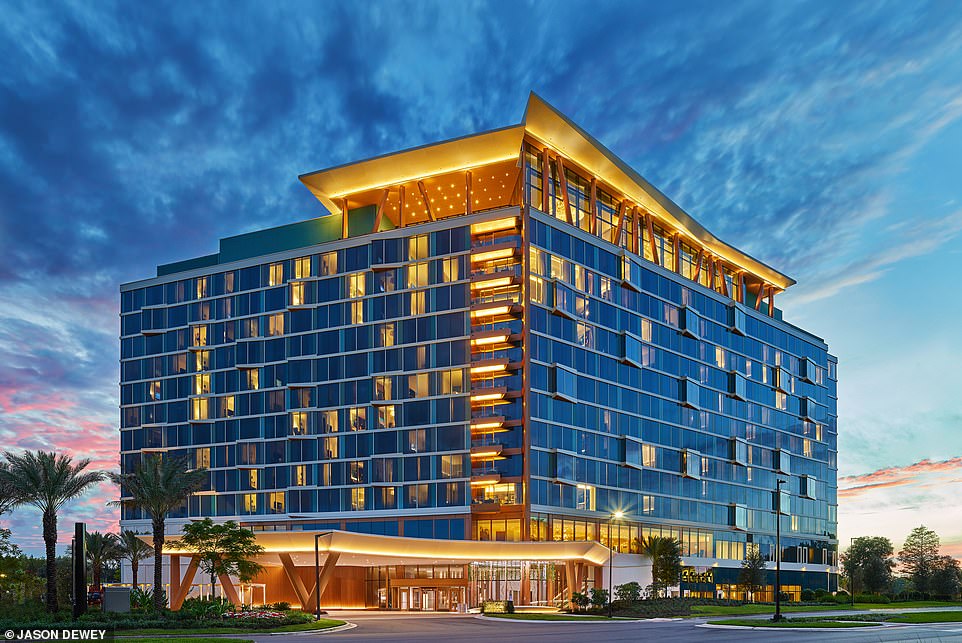 The 349-room luxury hotel tower is chicly designed inside and out. It’s awash with stylish neutral colours, including lots of cooling blues and greens, as well as striking artwork hanging in every room.

There’s a sprawling deck area with a fire pit and an outdoor pool, as well as a rooftop reception with incredible views across the parks.

We check into our ‘traditional’ room, which has a king-size bed as well as impressive floor-to-ceiling windows from where we can watch the famous fireworks display.

But first, we feast in the hotel’s Mediterranean restaurant, Amare, with delights such as hearth-fired tiger prawns, grilled Mahi Mahi and hand-made manti dumplings on the menu. 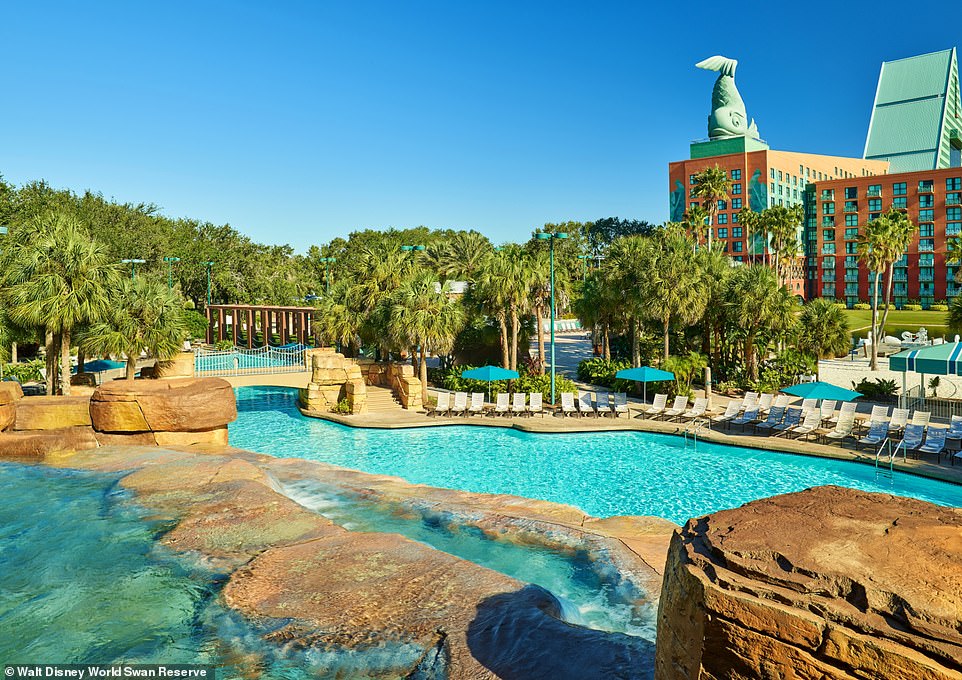 Above is Walt Disney World Swan Reserve’s Grotto Pool. Carol describes the hotel as ‘chicly designed inside and out’

Then, it’s off for an early night – we’ve got a busy day ahead of us.

After a sumptuous buffet breakfast at the hotel (everything from eggs and pancakes to fruit salad and waffles), we hop in our hire car and make the 15-minute drive to Magic Kingdom.

There are new attractions, nighttime spectaculars and other magical experiences being held at all the Disney parks as part of the 18-month celebration to mark the 50th anniversary, ending in March 2023.

But with the Cinderella Castle at the heart of the Magic Kingdom Park, we felt that one was the best option for a family with a five-year-old. And our Park Hopper tickets mean that after 2pm, we can head to other parks if we wish. 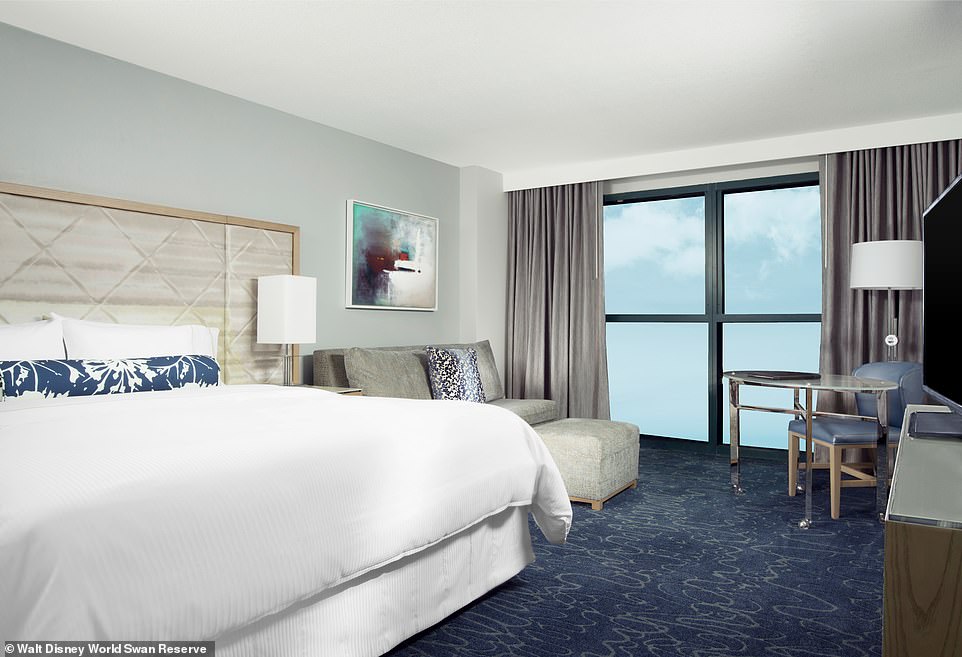 The hotel is ‘awash with stylish neutral colours, including lots of cooling blues and greens, as well as striking artwork hanging in every room’. Carol stays in a ‘traditional’ room (above) 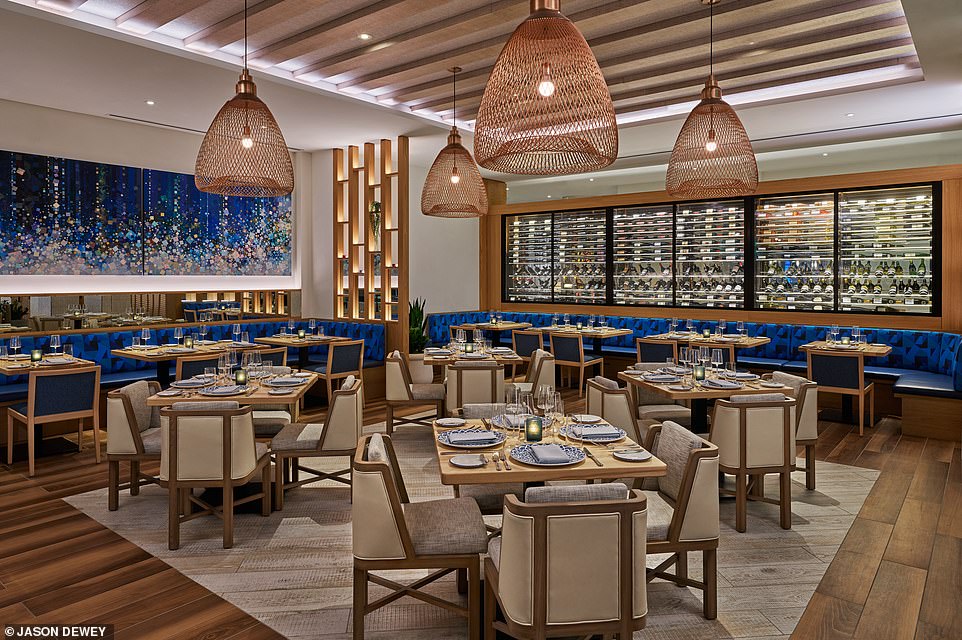 Carol and her family feast in the hotel’s Mediterranean restaurant, Amare, where delights such as hearth-fired tiger prawns, grilled Mahi Mahi and hand-made manti dumplings are served up

After parking and being transported to the monorail entrance, we then journey to the impressive entrance of the park – phones in hand.

It also allows us to select the next available arrival window for Lightning Lane entrances at select attractions – so less time queuing.

The sheer scale of the park is overwhelming and, as Disney newbies with an impatient child, I feel we need all the help we can get.

We start at the castle, dancing to the sounds of the Main Street Philharmonic marching band playing show tunes, and Disney movie classics. It’s a celebration in itself.

Then it’s off to Fantasyland – one of the park’s six themed areas that are brimming with rides, shows, shops and restaurants. We spin in the Mad Tea Party teacups; ride the Prince Charming Regal Carrousel; and hold on tight for the Barnstormer roller coaster. 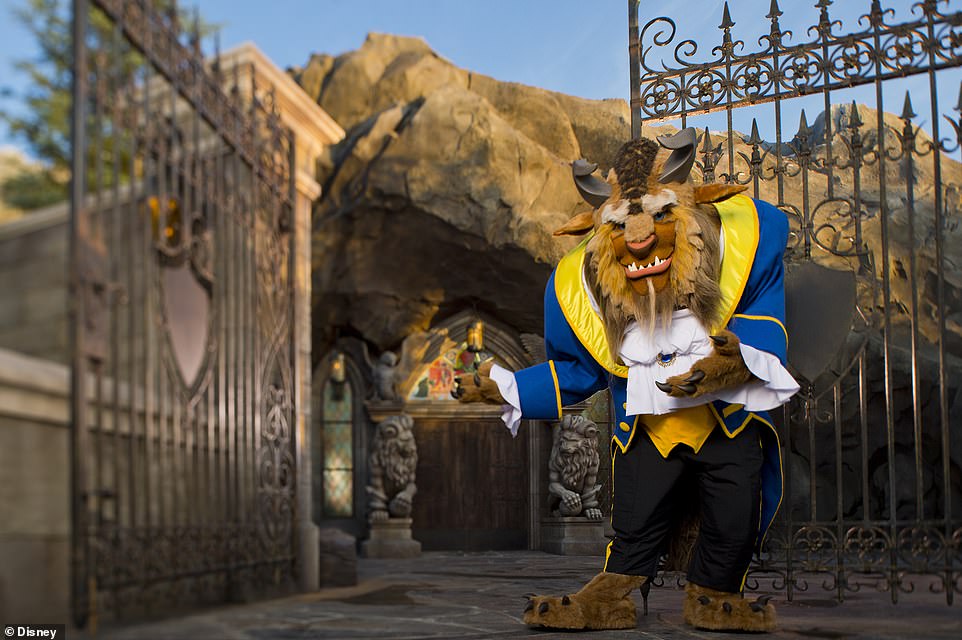 One of the stops on Carol’s Disney tour is Fantasyland – one of six themed areas brimming with rides, shows, shops and restaurants. Above is the entrance to Fantasyland’s Be Our Guest Restaurant

Enough of an adrenaline rush, it’s time for Mickey’s PhilharMagic – a 4D 10-minute show with a twist, combining characters from Disney classics, from Donald Duck and Peter Pan, to Aladdin and Mickey Mouse.

Our daughter jumps as our 3D glasses make it seem as though Mickey is leaping out of the stage. And when the magic carpet flies, we all feel as though we’re moving. Spoiler alert: during the water scene, we get wet!

Adventureland is a 10-minute walk away, so we use the app to book flying high on the Magic Carpets of Aladdin, while we take in a show at the Enchanted Tiki Room – complete with audio-animatronic birds singing and kid-friendly jokes.

Even though they’re two of the most popular rides, we skip Pirates of the Caribbean and the Jungle Cruise, due to long waiting times and having a little one who definitely won’t stand still for longer than an hour, and instead stroll around the treehouse inspired by the Swiss Family Robinson. We don’t feel as though we’re missing out as there’s so much to do. 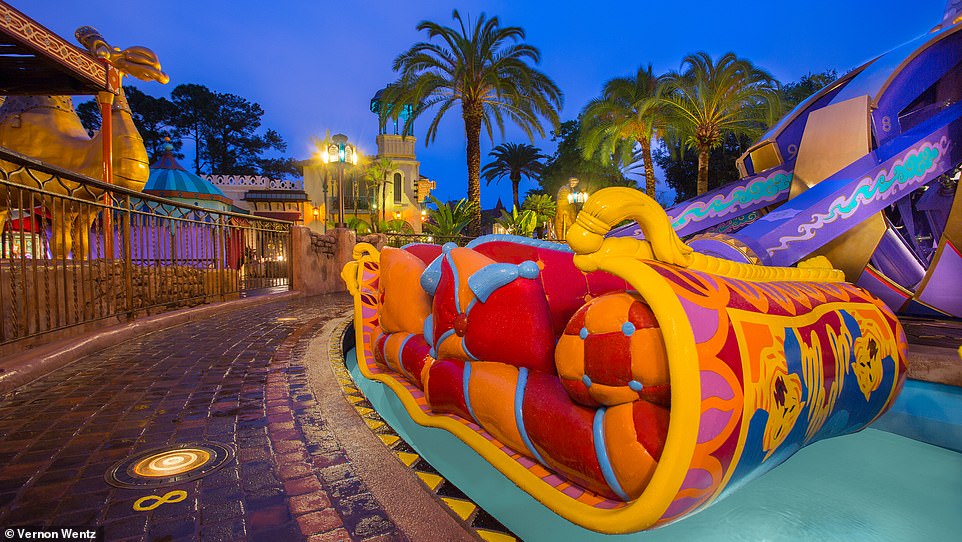 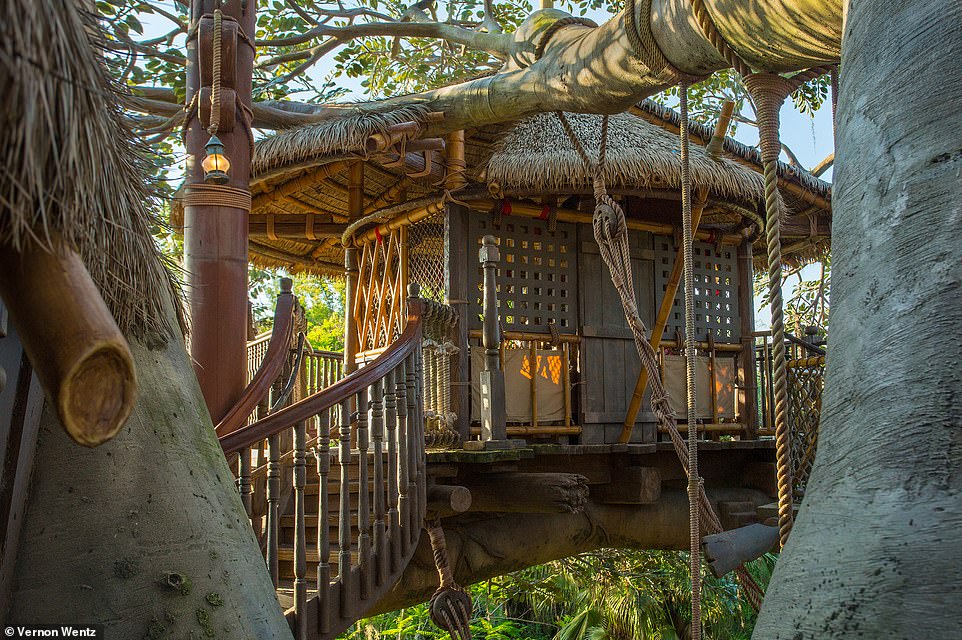 Instead of spending time queueing for the more popular rides, Carol opts to stroll around the treehouse inspired by the Swiss Family Robinson (above)

Back at Main Street, we order hot dogs and fries from Casey’s Corner, and plan our next ride – and we’re just in time for a parade, with a mix of floats and Disney characters that pass by slowly, much to my daughter’s delight, as she waves frantically at the princesses.

We barely have time to catch our breath before we head off to Tomorrowland – with rides themed around Disney’s portrayal of the future. We hop on the Transit Authority PeopleMover which gives us a leisurely view of the area.

Inside the 10-minute Monsters Inc, Laugh Floor is an animated comedy show, where laughs are ‘collected’ and used to generate electricity for Monstropolis. We’re told if there aren’t enough giggles, they might not be able to open the exit door – cue lots of laughs.

Our daughter is too small for the Tomorrowland Speedway, a 2,000ft track with mini gas-powered sports cars, so we book in for Buzz Lightyear’s Space Ranger Spin, where we shoot lasers to earn points for a showdown with evil emperor Zurg. 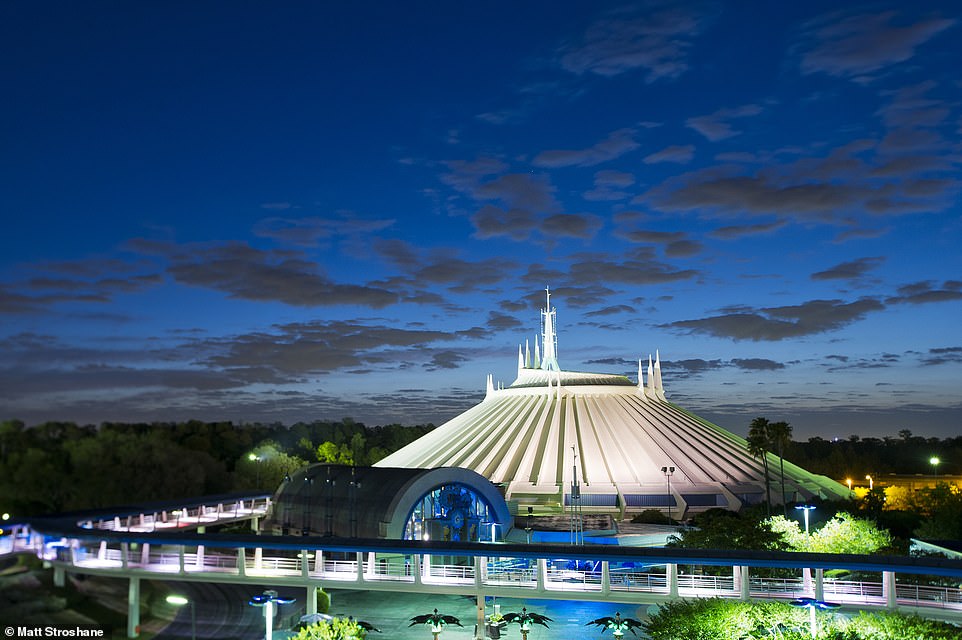 ‘We barely have time to catch our breath before we head off to Tomorrowland (pictured) – with rides themed around Disney’s portrayal of the future,’ Carol writes 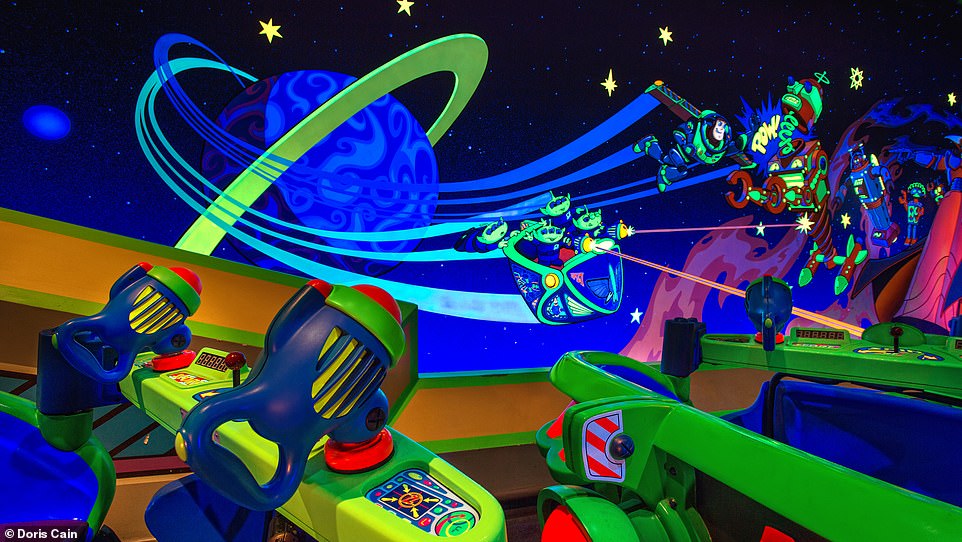 In Buzz Lightyear’s Space Ranger Spin (above), Carol and her family ‘shoot lasers to earn points for a showdown with evil emperor Zurg’ 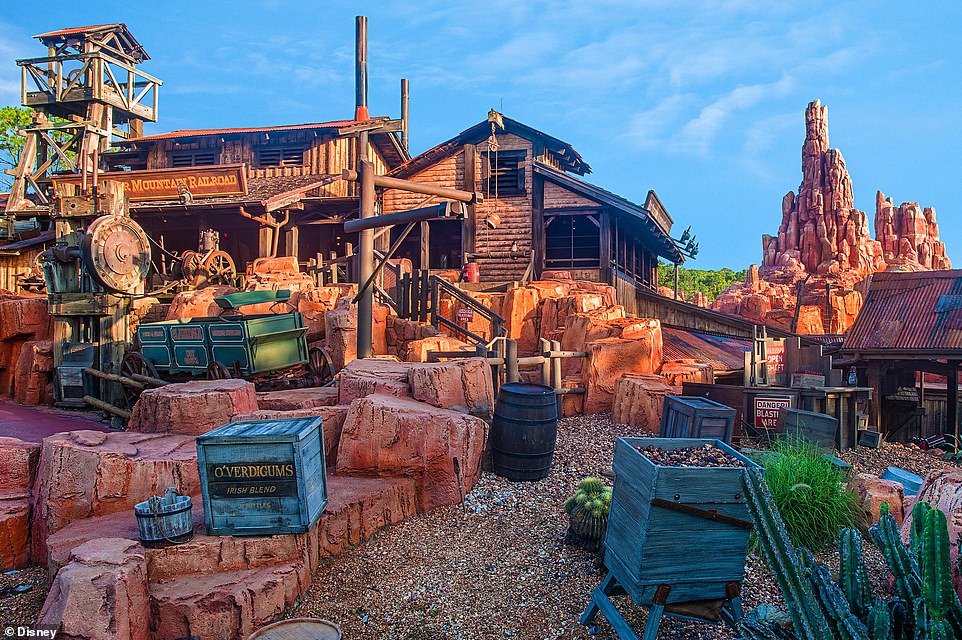 ‘The Big Thunder Mountain Railroad (above) will be a ride for our next trip to Disney,’ says Carol

Find out more about Disney park tickets at www.disneyworld.co.uk.

Find out more about the Genie+ services at www.disneyworld.co.uk/genie/information.

Our daughter has been promised ice cream, so we head back to the quaint, 50s-themed Plaza Ice Cream Parlor on Main Street.

We choose a sundae and a float to share, and sit on the grass area outside, soaking up the afternoon sun.

Then, we stroll past Liberty Square for the wild west of Frontierland, where we decide Splash Mountain and the Big Thunder Mountain Railroad will be rides for our next trip to Disney, and instead, we take in the 12-minute Country Bear Jamboree, with 20 audio-animatronic bears enjoying a knee-slapping hoe-down. Our little girl loves it.

Then it’s back to main street to check out the Disney shops, which are filled with princess and character dress-up outfits, teddies, toys, dolls – you name it. It’s every child’s dream come true.

We make it out with a Tangled archery set, and a music-playing bubble wand and count ourselves lucky.

There’s pasta for dinner at Tony’s Town Square Restaurant, before we head back to Cinderella’s castle for the fireworks extravaganza to mark the anniversary.

Set to music, Disney characters are projected onto the castle in the dark, as colourful explosions erupt behind it. It’s a spectacular 15-minute display.

The theme behind the Disney Enchantment event is to inspire everyone to ‘believe in magic’.

And as we leave the park after what’s been an incredible day, I look at our daughter who’s asleep in the back of the hire car after having ‘one of the best days of her life’ and I think it certainly has.