People who eat a lot of ultra-processed foods are more likely to get type 2 diabetes, a study has found.

Researchers followed more than 100,000 people, regularly tracking what they ate and who developed diabetes.

For every 10 per cent of the diet made up of ‘ultra-processed foods’, the risk of the deadly condition rose by 15 per cent.

The study, led by scientists at the Paris 13 University, adds to growing evidence that processed foods are resoundingly unhealthy.

Evidence shows they make people fatter, put strain on the heart, and contribute to illnesses including cancer, depression and high blood pressure.

Experts urged people to take the findings with a pinch of salt, saying the study has done nothing to prove the foods actually cause type 2 diabetes.

Processed foods do, however, make people gain weight and being overweight is one of the biggest risk factors for developing the condition.

‘These results suggest an association between ultra-processed food consumption and type 2 diabetes risk,’ the researchers said.

Their study followed 104,707 people with an average age of 42 for around six years each, tracking what they ate and how many of them got diabetes.

A total of just 821 people got diagnosed during the course of the study, but the risk was higher for processed food lovers.

They measured how much processed food people ate in weight – as a proportion of the grams of all food they consumed in a day on average.

People were allowed to eat whatever they wanted, but were asked to record their diets for a short period every six months.

On average, 17.3 per cent of people’s diets was made up of ultra-processed foods, according to the results of the study. 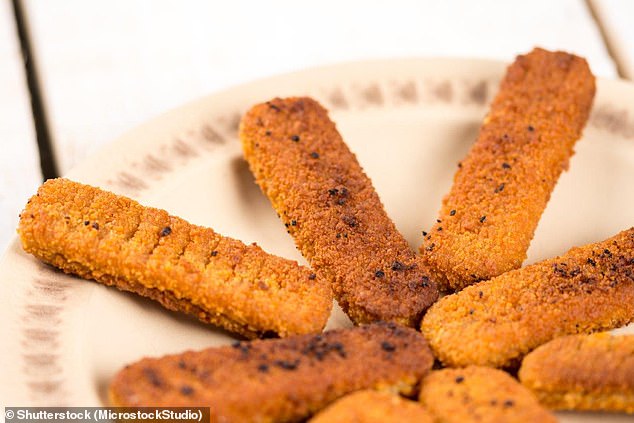 An extra 10 per cent – so just over a quarter of someone’s daily intake – raised the person’s risk of diabetes by 15 per cent, the study claimed.

WHAT ARE PROCESSED FOODS?

A processed food has been altered in some way during its preparation.

This can be via freezing, canning, baking or drying.

Processed foods are not necessarily unhealthy unless sugar, salt or fat are added to make them more palatable or extend their shelf life.

This can lead to people eating more than the recommended allowance of sugar, salt and fat a day as they unaware of the levels in processed foods.

People can reduce their intake by reading nutrition labels on processed products to check their fat, salt and sugar content.

It is worth noting some healthy foods require processing, such as pressing olives to make oil.

The paper did not make clear exactly how much daily intake of ultra-processed foods – defined as having very few intact raw ingredients in their natural forms – was considered to be unhealthy.

Pre-prepared frozen goods, soft drinks, packaged snacks and reconstituted meats such as ham and bacon are all included in the category.

For people eating the most ultra-processed food there were 166 cases of diabetes per 100,000 people in any given year.

This compared to just 113 in the group which ate the least, and 132 on average.

Researchers suggested the increased risk could be caused by poorly-understood chemicals created during processes such as pre-frying and hydrogenating.

Other ingredients such as sweeteners, thickening agents, oils, colourants or sugars may have damaging health effects.

And frozen products may spend more time in contact with plastic packaging, which is known to have health risks of its own, they suggested.

However, people who ate the most of them also tended to be overweight, inactive or smokers.

Although the scientists took this into account and still found a link, it suggests the processed foods may just be part of a bigger, unhealthier picture.

Experts not involved with the research said the study could not even come close to proving the foods were causing the diabetes.

‘The new study does not really throw much new light on how ultraprocessed food consumption might possibly be a cause of changes in diabetes risk,’ said Professor Kevin McConway, a statistics expert at The Open University.

‘They do list various ways by which certain components or properties of some processed foods might have effects on the processes that lead to type 2 diabetes.

‘The possible causal pathways from the foods to the diabetes do not apply to every food on the ultraprocessed list, so it would need analysis of individual foods or groups of foods to throw clearer light on what might be going on, and despite the 100,000 participants, there isn’t really enough data for most such investigations.’

Dr Duane Mellor a dietitian at Aston University in Birmingham, said: ‘Reducing how much of these ultraprocessed foods, which is already a core part of current dietary guidelines is a simple step that could improve our health individually and as a society, so this study largely tells us what we already know.’

The French team’s research was published in the journal JAMA Internal Medicine, by the American Medical Association.

WHAT IS TYPE 2 DIABETES?

Type 2 diabetes is a condition which causes a person’s blood sugar to get too high.

More than 4million people in the UK are thought to have some form of diabetes.

Type 2 diabetes is associated with being overweight and you may be more likely to get it if it’s in the family.

The condition means the body does not react properly to insulin – the hormone which controls absorption of sugar into the blood – and cannot properly regulate sugar glucose levels in the blood.

Excess fat in the liver increases the risk of developing type 2 diabetes as the buildup makes it harder to control glucose levels, and also makes the body more resistant to insulin.

Weight loss is the key to reducing liver fat and getting symptoms under control.

It can lead to more serious problems with nerves, vision and the heart.