Ultra-rich flock to Italy after it reveals flat €100K tax

The world’s ultra-rich have flocked to Italy after the country revealed new low tax rates for top-tier earners last year.

Millionaires from Russia, Norway and the US have upped sticks looking to take advantage of the nation’s flat-rate tax of €100,000 a year.

The measure lets wealthy individuals taking up residency pay a flat tax regardless of their income.

Millionaires have moved to the glamourous Italian cities of Milan (pictured) and Venice looking to take advantage of the nation’s flat-rate tax of €100,000 a year, which top-tier earners pay regardless of income

The bid appears to have worked with around 150 people, including some with wealth in the ‘hundreds of millions,’ inquiring about the measure.

This was revealed by Fabrizio Pagani, head of the office of the Minister of Economy and Finance, during an interview in London, Bloomberg reports.

The country has also seen an influx of millionaires from Norway and Holland as well as from the UK, Switzerland, Russia and US.

‘We are talking about very, very rich people,’ Pagani said.

However, under the tax measure, individuals are expected to move their residencies to Italy. 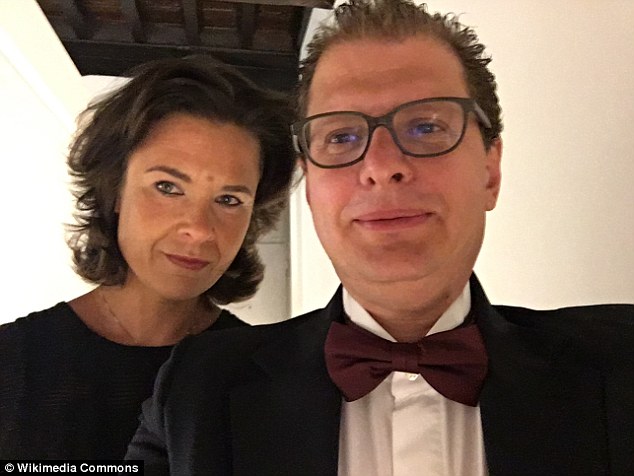 The influx was revealed by Fabrizio Pagani, head of the office of the Minister of Economy and Finance (pictured with his wife, Katharina Eikenberg)

Many millionaires have reportedly chosen to settle in Milan, Venice and small towns around the base of the Alps, Pagani added.

The number expected to take up the offer will grow ‘exponentially’ as was the case in Portugal, he added.

The figure of ‘150 is a very good number for the first year,’ he concluded.

The scheme is part of a plan to boost the economy with investments, consumption and fresh capital and it comes as Italy struggles to accelerate its economic recovery after years of recession.