Unbearable heat. Roads blocked with nose-to-tail cars — not to mention all those Dutch caravanners. Mosquitoes on biting raids every night.

Sadly, these are intrinsic elements of too many Mediterranean holidays in peak season. So why not choose September or early October instead? The weather is still sunny. The pools and sea still warm. And tourist sites are relatively deserted.

Our base for a late-September week in Umbria was Segreto Gelsomino, a hill-top villa six miles from Orvieto. This Etruscan-heritage city may not have the fame of Siena, Florence or Perugia. Indeed, I had always associated Orvieto with a tart white wine I’d bought under-age from Sainsbury’s when its own brand cider had run out.

But now, Orvieto wines are drooled over by wine buffs who speak of how the vines have ‘taken advantage of the soft tufa [chalky limestone] rock and are perfect for all occasions’.

After an hour’s drive from Rome, we reached the city at 7pm and found free parking next to the cathedral (about which Pope Leo XIII suggested: ‘On Judgment Day, its beauty will carry it right up to Heaven’.)

In search of somewhere to eat before the traditional holiday horror of trying to find a villa in the pitch dark with inept instructions and a dodgy map, we spotted a poster for a production of Verdi’s La Traviata in the city’s theatre, due to start in 20 minutes.

Like any adventurous Briton abroad, we made a beeline for the venue, paid £15 for a ticket — and found time to scoff free ham rolls, olives and other snacks with a glass of non-Sainsbury’s Orvieto Bianco Superior in the foyer bar. No evening meal needed.

The rousing performance of Verdi in the 1866-built Luigi Mancinelli Theatre (with frescoes by Cesare Fracassini, no less) gave us the oomph to find our villa at midnight without a hitch. Apart, that is, from the bewildering sight of a porcupine scuttling along the dark road behind a badger.

Waking up the next morning to a view of vineyards, tumbling ploughed fields, a ruined chapel in the garden, and a lake and mountains in the distance was special.

The house may have once been a rundown farmstead which took five years to renovate, but the high- tech gadgetry was stupendous. You know the sort: a dishwasher with a floor-projected green LED spotlight which signals wash completion; a glass induction cooker hob (which made our stove at home seem like a crude Palaeolithic pot) and a sound system to control the speakers in every room and poolside via a mobile phone. 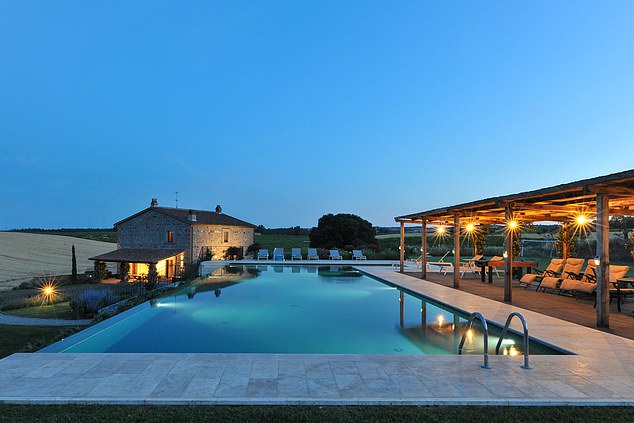 Late break: Segreto Gelsomino, above, is a hill-top villa six miles from Orvieto

If you insist on cooking your own food in your villa, make sure you buy the ingredients from a corner shop run by one of those classic granny-types made famous by movies such as Cinema Paradiso.

Our favourite was Centro Spesa store in Strada di Stranieri Rosa Maria in the village of Porano, where the eightysomething owner spoons out ricotta cheese as if it were ambrosial food of the gods.

Sleeping ten people, the villa is perfect for extended family gatherings or groups of friends.

One admission of failure on our part: the high-spec TV proved too tricky for us — despite three remote controls, detailed instruction manuals and notes on how to tune into English-language programmes, we were defeated.

Talking of remote controls, there was a zapper, too, to operate the whirlpool spa bath in one of the bedrooms, which could easily have accommodated six and still have room to spare.

Highlights beyond the villa were an evening trip to swim in nearby Lake Bolsena, 44 sq miles of freshwater in the bowl of an extinct volcano. And the hauntingly eerie Civita di Bagnoregio, known as the ‘Dying City’, a medieval hamlet which looks about to crumble into oblivion as the hilltop it’s perched on is threatened by erosion.

A visit to the Tenuta Vitalonga Winery was a joy, tasting 14-day-old mosto — the first pressing of grapes and stalks from the very recent harvest. Indeed, it was no surprise to learn that the great Tuscan artist Luca Signorelli was told by the Pope that when he finished the frescoes in Orvieto cathedral’s San Brizio Chapel, in 1504, he must be paid with as much wine as he wanted.

Today’s architects may not create such masterpieces, but the infinity pool at villa Segreto Gelsomino was something to behold.

A last morning’s swim as the sun rose over the brow of the Umbrian hills, with Monteverdi’s The Coronation Of Poppea playing on the poolside speakers, and you couldn’t be further from the madding crowds of July and August.

Tuscany Now & More (tuscanynowandmore.com, 020 7684 8884) offers Segreto Gelsomino from £2,837 for seven days for six people (maximum ten) on a self-catering basis, and features a range of properties across the region and Italy. It can also provide private chefs, excursions and other services on request.