UN investigators have demanded that the US ‘immediately’ launch an investigation into evidence that Jeff Bezos’s cell phone was hacked by Mohammed bin Salman.

David Kaye and Agnes Callamard, two special rapporteurs for the UN, say they have seen forensic evidence which suggests Bezos was hacked after being sent a video file over WhatsApp in May 2018 from the account of the Saudi Crown Prince.

The analysis that Kaye and Callamard refer to is thought to have been carried out by a firm Bezos hired to trace the source of a data leak after the National Enquirer broke news of his affair with Lauren Sanchez in January 2019.

The probe, by David Kaye and Agnes Callamard, is expected to conclude with ‘high confidence’ that the hack is real and came from Bin Salman 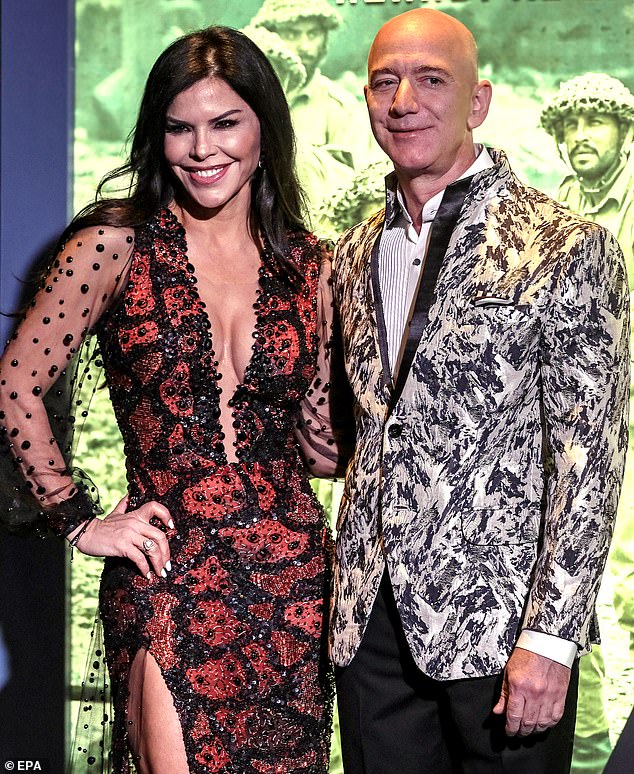 Investigators traced the leak back to a video of a Swedish flag overlaid on a Saudi flag with Arabic text on it that Bin Salman sent to Bezos out of the blue on May 1, 2018, the New York Times reported.

It is not clear whether Bezos opened the file, but data being transferred from his phone immediately went up three hundred-fold, investigators said.

Then, in November 2018 ahead of the release of the National Enquirer story, Bin Salman’s account is thought to have sent Bezos a photo of a woman who looks like Sanchez along with a taunting caption.

‘Arguing with a woman is like reading the software license agreement. In the end you have to ignore everything and click I agree,’ the message said.

According to the Times, Bezos and his wife were discussing a divorce at the time – which was not public knowledge but would have been obvious to someone reading his private messages.

HOW THE ‘HACK’ UNFOLDED

The first person to publicly point the finger at Saudi Arabia over the hack was Gavin de Becker, Bezos’s long-term security contractor, in a column in the The Daily Beast in March last year.

However, Becker did not reveal what evidence drew him to that conclusion nor precisely who was responsible.

Then, on Tuesday, The Guardian reported that evidence had been uncovered directly linking Bin Salman to the hack.

According to two sources, Bezos was sent spyware during a WhatsApp conversation with the Saudi Crown Prince – known as MBS – on May 1, 2018.

The sources said the pair – who first met in Riyadh in 2016 and had dinner just weeks before the alleged hack – had been having a good-natured conversation before a corrupt video file was sent from MBS to Bezos.

The video file is thought to have contained a powerful piece of spyware known as Pegasus, which was developed by Israeli tech firm NSO Group.

Pegasus is capable of accessing messages on an infected phone, tracking calls, collecting passwords, tracing the location of the phone, accessing the phone’s microphone and video camera, and scalping data from apps.

Within hours of Bezos receiving the message, a large amount of data was transferred off the phone, it is alleged.

Five months after the data transfer journalist Jamal Khashoggi – a columnist who worked for the Washington Post which Bezos owned – was murdered in the Saudi consulate in Istanbul.

The Post led criticism of Saudi Arabia over the attack – including stories which implicated a Saudi hit squad and MBS personally in the killing.

Three months after the killing – and as world and business leaders turned their backs on MBS and his plans to modernise Saudi’s economy – the National Enquirer released its story about Bezos’s affair.

The magazine claimed to know of the affair from texts ‘obtained’ from Bezos’s phone, and to have naked photos of Bezos and Sanchez that they sent to one-another.

David Pecker, the publisher of AMI which owns the National Enquirer met the crown prince in September 2017.

Both have strenuously denied working together in the past to attack Bezos. 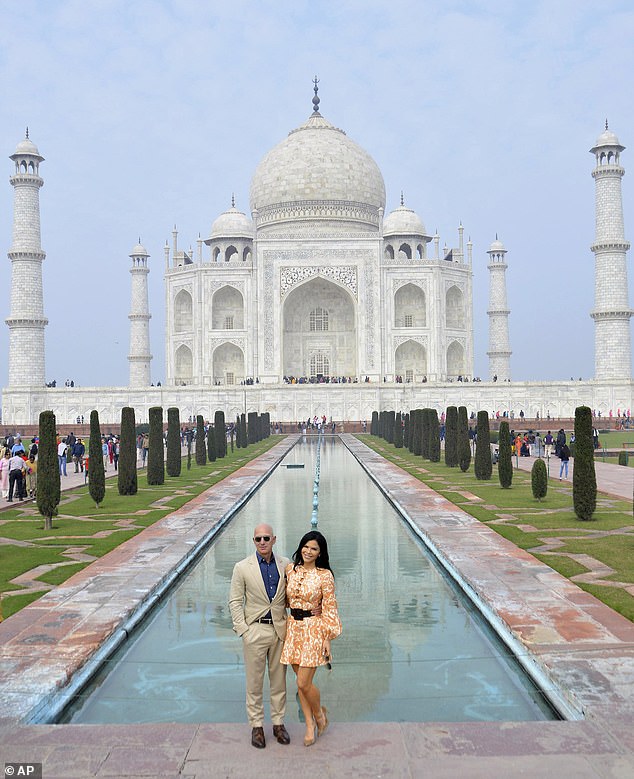 Bezos and Lauren Sanchez were photographed in front of the Taj Mahal in Agra, India on Tuesday 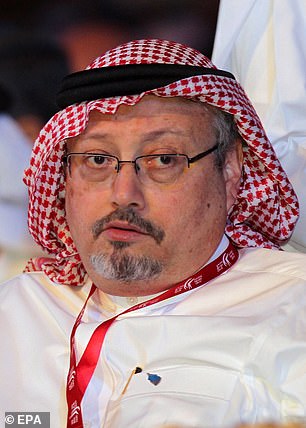 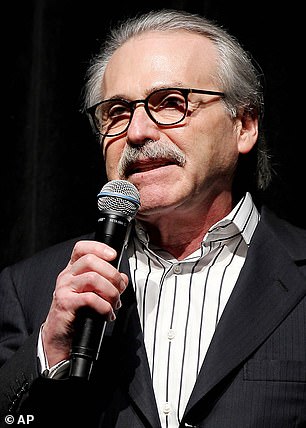 Saudi Arabia was furious over the Washington Posts coverage of the death of Jamal Khashoggi (left) at the hands of a Saudi hit squad. David Pecker (right), the publisher of AMI which owns the National Enquirer, met the crown prince in September 2017

In April 2018, AMI published a 97-page glossy magazine praising Saudi Arabia and bin Salman, which mysteriously appeared on newsstands in Walmarts and rural supermarkets across the nation with no explanation.

Bezos and Bin Salman had a good relationship for a time after they first met, with the Amazon founder pitching the ruler-in-waiting on a $1billion plan to build three data centers in the kingdom.

But their friendship soured after the Post hired Khashoggi, a member of the Saudi elite and critic of Bin Salman, as a columnist in 2017.

As reports of the hack began to circulate, the Saudi embassy in Washington tweeted: ‘Recent media reports that suggest the Kingdom is behind a hacking of Mr. Jeff Bezos’ phone are absurd.

‘We call for an investigation on these claims so that we can have all the facts out.’

Investigators at the UN are now considering a formal approach to Saudi Arabia to ask for an explanation, their unnamed sources say.

Both Saudi Arabia and AMI has said Saudi Arabia had nothing to do with the publication of the story about Bezos’ affair with Sanchez.

A lawyer for Bezos told The Guardian: ‘I have no comment on this except to say that Mr Bezos is cooperating with investigations.’

De Becker had been tasked with investigating any weak links in Bezos’ operation after the public exposure of his months-long fling with his now girlfriend Lauren Sanchez was revealed in excruciating detail by The National Enquirer.

De Becker noted that David Pecker, the AMI executive behind the Enquirer, and the crown prince have a friendly relationship.

Before his death, Khashoggi had been critical of the Saudi Arabian government in his columns for The Post.

In December a Saudi court exonerated Prince Mohammed’s top aides over the murder of Khashoggi, a verdict condemned globally as a travesty of justice but backed by Washington.

Five others were sentenced to death over the murder in a closed-door trial.

Both the CIA and United Nations special envoy Agnes Callamard have directly linked Prince Mohammed to the killing, a charge the kingdom vehemently denies.