Una Healy’s children have been blocked from entering America from their native Ireland, to visit their father, Ben Foden – who lives in the US with his second wife Jackie Smith and their 14-month-old daughter Farrah.

The Saturdays singer, 39, had handed Aoife, nine, and Tadhg, six, over to their stepmother Jackie, 36, after she flew from New York to Dublin to accompany the youngsters on the plane to spend the summer in the US; but after spending hours at the airport, immigration officials refused to let the children travel.

Current rules surrounding entry into the US from the UK and Republic of Ireland amid the COVID-19 crisis reject children of non-citizens from traveling to the states, unless in special circumstances.

35-year-old Ben – who was married to singer Una from 2012-2019, but split from her amid cheating allegations – is currently awaiting authorisation on his US Green Card and cannot leave the states while this is processed.

He moved to America following his divorce to play for Rugby United New York. He met Jackie in the US during the summer of 2019 and married her on board a luxury yacht in Nantucket, Massachusetts, two weeks after they started dating.

The socialite announced her pregnancy soon after, and the couple welcomed their daughter in May last year.

As Ben’s Green Card is still being processed, Aoife and Tadhg have been disallowed entry to visit their father.

The rules currently allow some exceptions, including ‘certain family members of US citizens or lawful permanent residents including spouses, minor children, parents, and siblings. 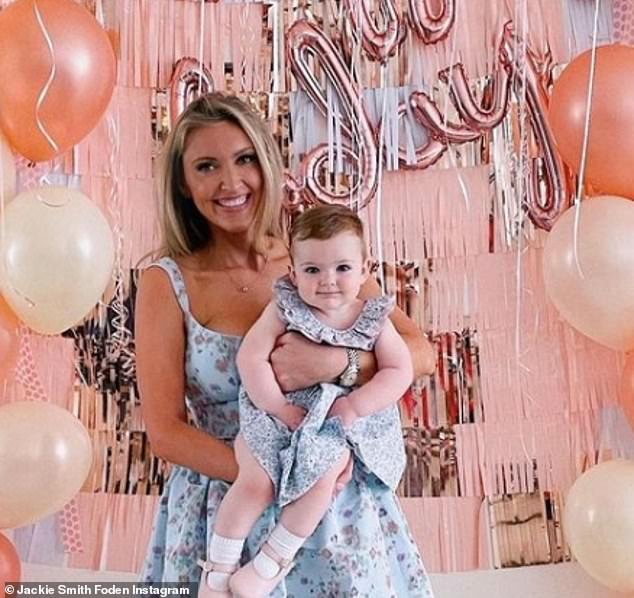 Blocked! Una handed the kids over to their stepmother Jackie Smith Foden [pictured with daughter Farrah] after she flew from New York to Dublin to accompany the youngsters on the plane to spend the summer in the US, but after spending hours at the airport, immigration officials refused to let the youngsters travel 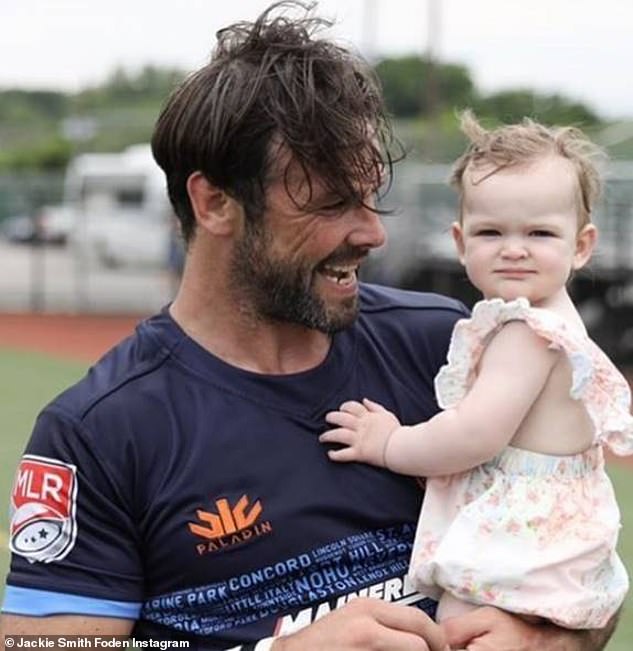 Jackie explained: ‘Hours on the phone with Aer Lingus making sure their stepmother can bring them over and booking their ESTAs. Ben [pictured] can’t travel because he is getting his greencard processed and can’t leave the country’ 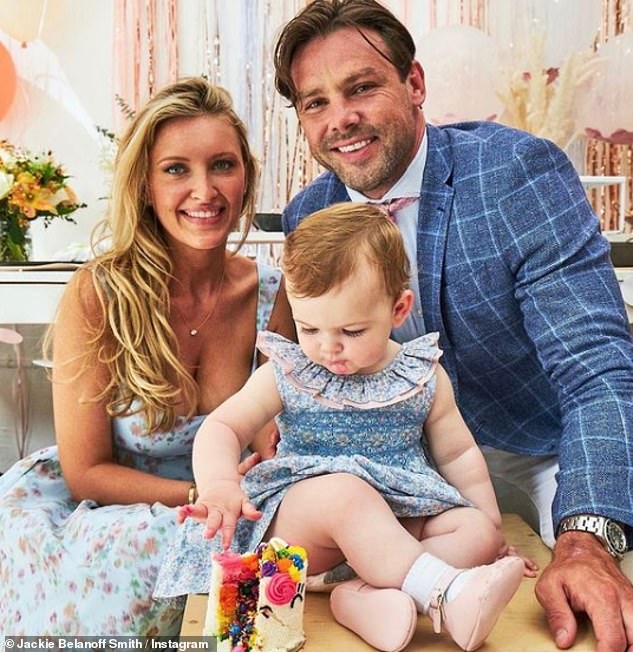 Baby number two/four? Rugby player Ben and his second wife are thinking about having another child and relocating to the UK

However, Ben’s in-limbo Green Card is likely to be what’s stopping his son and daughter from traveling.

Entering the US from the UK: What are the current rules?

As further provided in each proclamation, citizens and lawful permanent residents of the United States, certain family members, and other individuals who meet specified exceptionse who have been in one of the countries listed above in the past 14 days will be allowed to enter the United State

The ‘Presidential Proclamations on Novel Coronavirus’ were set out by the White House in January 2021, and are yet to be updated amid the vaccine rollout.

American Jackie slammed President Biden in an Instagram rant, as she explained the situation for her followers, friends and family.

She wrote: ‘I currently just spent the past month organising their trips over to the US- getting tickets booked.

‘Hours on the phone with Aer Lingus making sure their stepmother can bring them over and booking their ESTAs. Ben can’t travel because he is getting his greencard processed and can’t leave the country.

‘I take the red eye to Dublin last night. When I checked in at JFK the attendants check on the kids return flights. Everyone was made aware of my plans to turn right back around with my stepkids.

‘I pick them up in Dublin today only to have their tickets blocked by immigration.

‘An hour at check in trying to get them through and then another 1-2 hours stuck in immigration offices only to be told there is a ban on EU citizens and there’s nothing possible we can do other than fly to Turkey or Mexico quarantine for 14 days and then bring them over from there.’

Jackie admitted she and the children were devastated and praised their parents for being able to calm the children down.

She continued: ‘Having to break these poor babies hearts who had their hopes up for a fun summer with their dad and sister, we are all not okay right now.

‘Una was a rock star with them, they were on the phone with their dad. Both Una and he calmed them down. I am very much not okay and I am a complete mess.’

The family are now looking into options for alternative plans over the summer.

She wrote: ‘We will [be] filing for emergency travel for Ben and probably be spending the rest of the summer in England/Ireland when Ben’s rugby season is done.’ 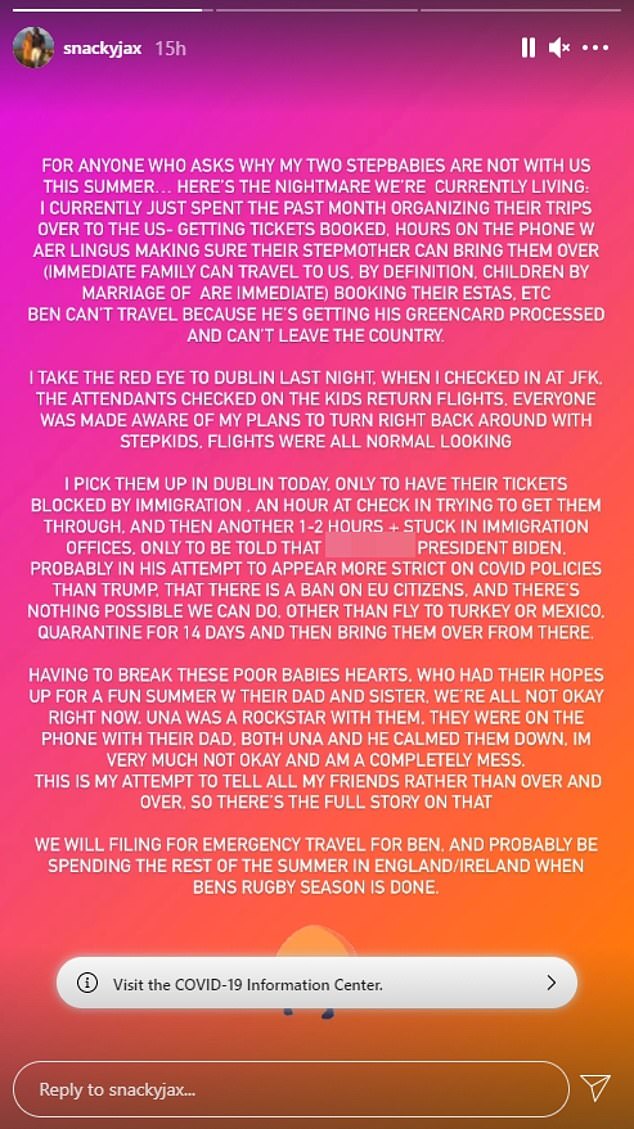 Rant! Jackie took to Instagram to rage about the inconvenience 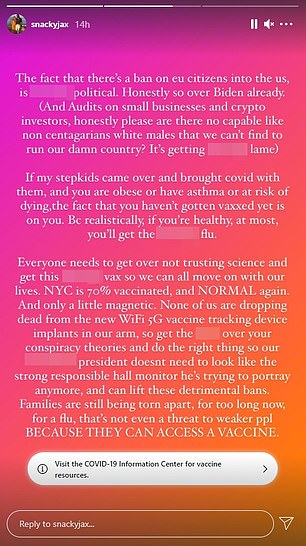 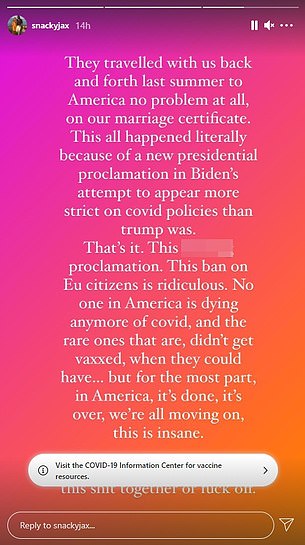 She continued: ‘Having to break these poor babies hearts who had their hopes up for a fun summer with their dad and sister, we are all not okay right now’

Ben and Jackie have recently expressed that they might have another child.

Speaking to OK! Magazine three months ago, Jackie said: ‘We might have another baby next year.’

She also admitted that Farrah ‘lights up’ when she gets to spend time with her half-brother and sister.

Remarking that Ben and Una’s children are very well behaved, Jackie also added that she believes she and Ben will relocate to the UK one day, returning to the US for holidays.

Ben also previously told MailOnline that they might move to England.

Speaking pre-pandemic, and pre-Farrah, he said: ‘We’re planning to move back to England…and buy a house in Cheshire!’ 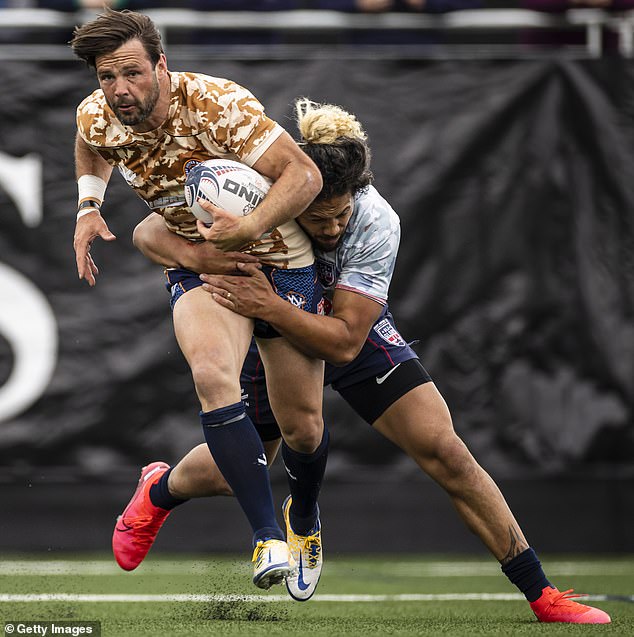 Stateside: Ben plays for Rugby United New York in the US currently 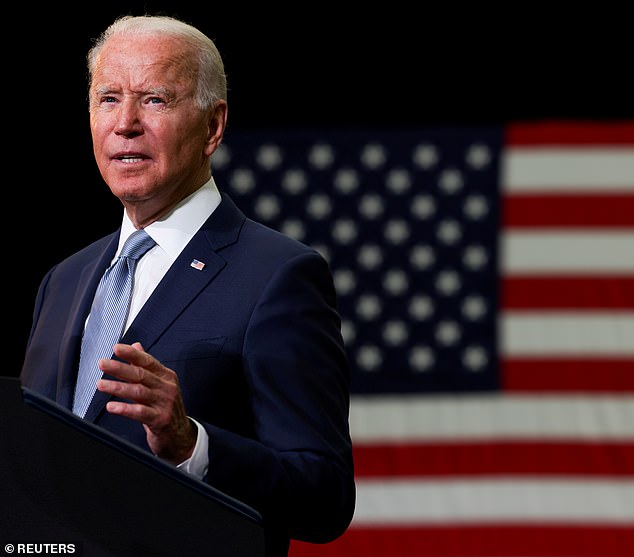 Fuming! Jackie branded President Biden [pictured last week] a ‘c**k face’ in an expletive-filled rant about the ‘Presidential Proclamations on Novel Coronavirus’ that were set out by the White House in January 2021, and are yet to be updated amid the vaccine rollout

Ben allegedly cheated on first wife Una with PR girl Becky Milne, who denied the claims; he then turned to excessive partying in a bid to cure his loneliness – but soon met entrepreneur Jackie, shocking friends and family by marrying within two weeks.

He revealed that Jackie made a positive impact on his life, saying in the autumn of 2019: ‘My life has changed a lot over the last seven months. I have been in America and I got married. In New York it’s a very busy way of life, everyone is quite healthy.

‘Jackie loves all these shakes in the morning. She’s not a vegan or vegetarian but we have more of a vegetarian diet together. She has been a very positive influence on my life and my diet. I have always been rubbish nutrition wise – nutrition is so important now coming away from rugby to stay fit and healthy.’ 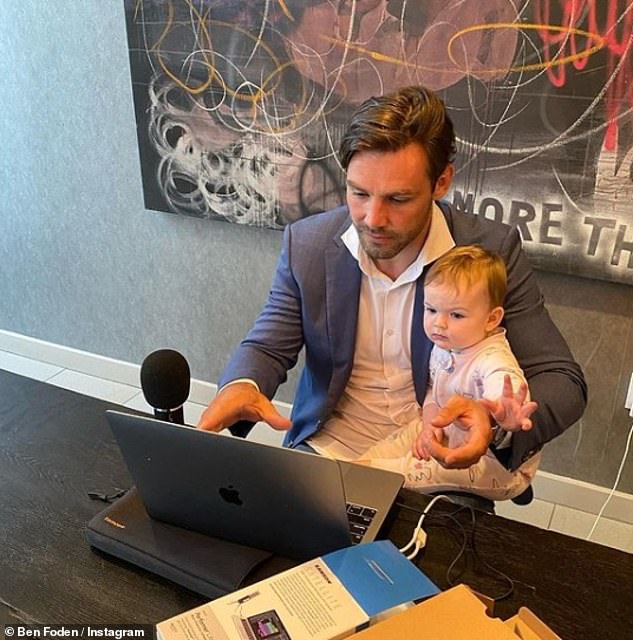 Busy: Ben, 35, is a father-of-three, welcoming Farrah a year ago with Jackie, 36

He added: ‘It is really good to be busy, if I’m left to my own devices and have lots of free time then I get bored and lethargic.’

In March this year, Una spoke about how she negotiates her relationship with her ex-husband Ben for the sake of their children during a chat on Lorraine.

During the interview, Una talked about why she believes it is important to ‘preserve the best relationship with Ben, even though he is far away’. 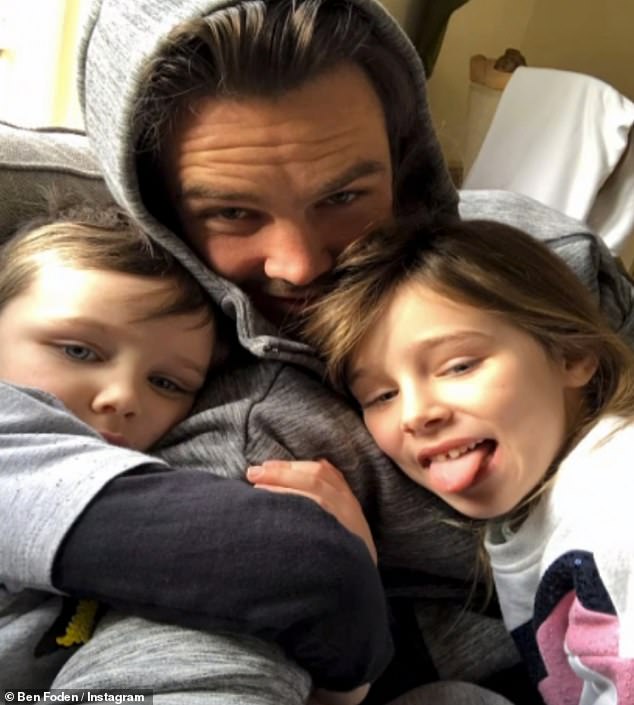 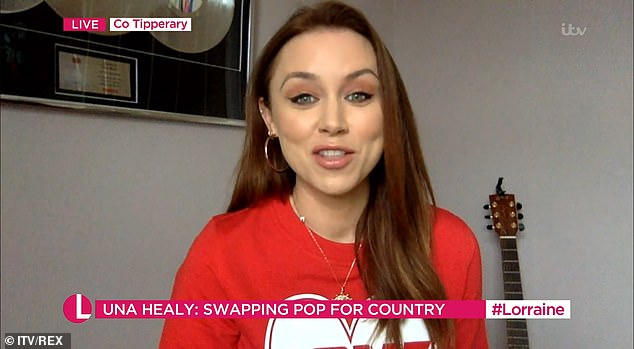 Family: Back in March, Una spoke about how she negotiates her relationship with her ex-husband for the sake of their children during a chat on Lorraine

Lorraine Kelly told Una: ‘I congratulate you for making sure that’s worked for them, because the children are the most important things, aren’t they?’

Una said: ‘They absolutely are, they are my world, Aoife and Tadhg, they really are.

‘They’re still so young as well so it’s very important to preserve the best relationship as possible with their dad, although he does live very far away and he has a new wife and a child.

‘I always try and nurture that relationship that they have, they communicate… they were just on FaceTime yesterday. 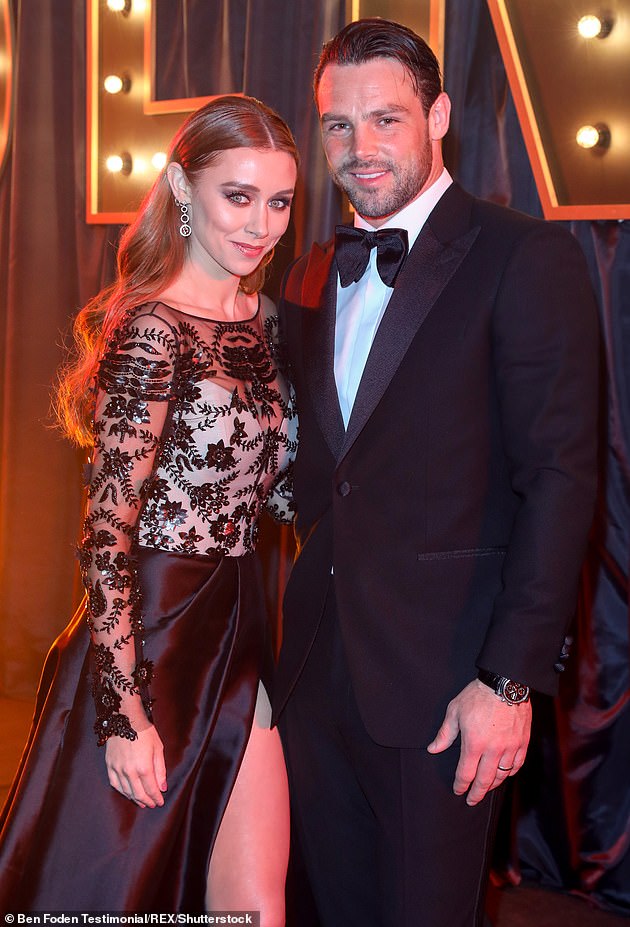 Divorce: The singer split from the rugby player in 2018 after Ben allegedly cheated on her with PR girl, Becky Milne, who denied the claims [pictured in 2018]

‘He sees them when he can and I will always try and protect that relationship as best as possible and because I’m in the public eye, I get asked about him, I would never bad-mouth him or say anything bad because I don’t think that’s fair on the kids.

‘That’s just how I feel on the whole thing.’

The Saturdays star relocated back to Ireland following the breakdown of her marriage.

She went on to have a relationship with David Breen, but split from him last year.

The songstress is now looking to date again and her only criteria is that they are a ‘nice person’. 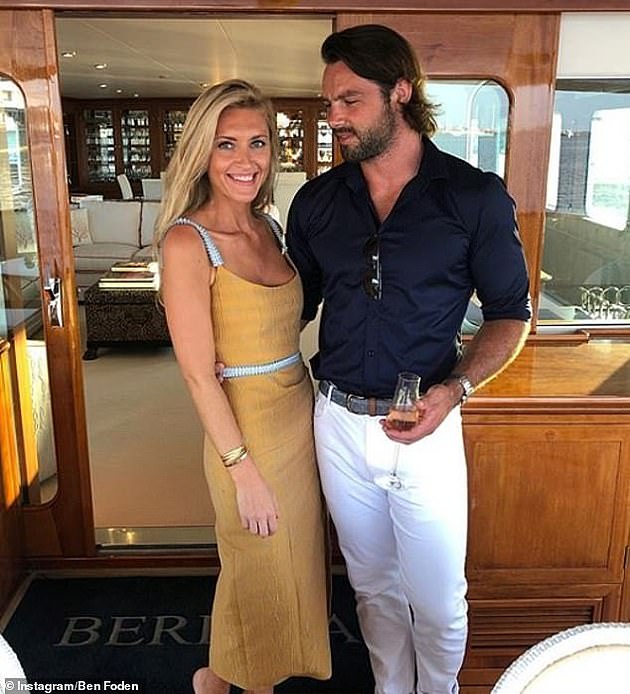 Moved on: Just one year after their split, Ben married his second wife on board a luxury yacht in Nantucket, Massachusetts and welcomed Farrah last May 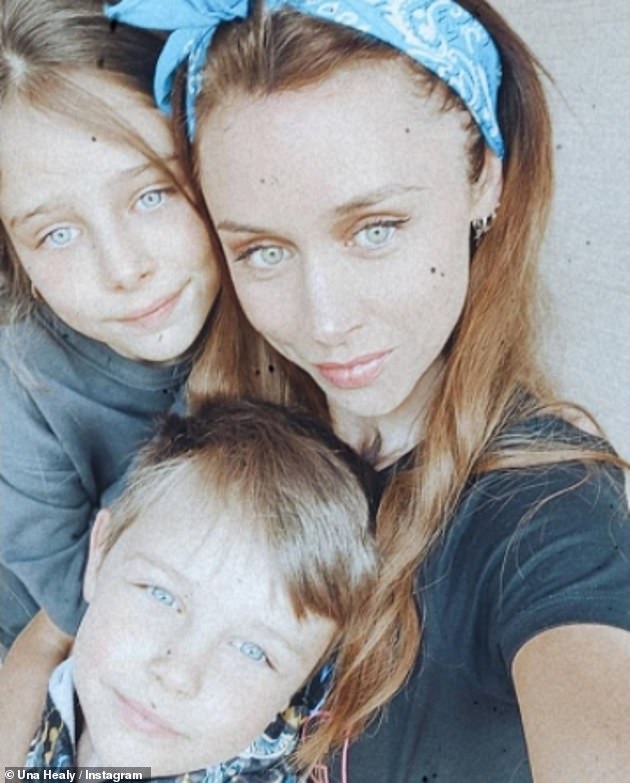 Family: Una added she had to ‘get used to my new life’ and that she couldn’t be at a ‘better place’ than with her family after relocating back to Ireland [pictured in April]

Talking about a disastrous date with the host, Una said: I’m finished with dating apps.

‘We were chatting for weeks, I had a Skype dinner date. I was going to meet him and then I got a text saying, “I’ve just been knocked down, hit by a van” and he said he felt concussed.’

Una explained how the date told her he went to hospital and when they eventually did go on for a walk, they didn’t hit it off.

She said: ‘That’s the danger of online dating. Building this date up in your head but it could be a let down.’ 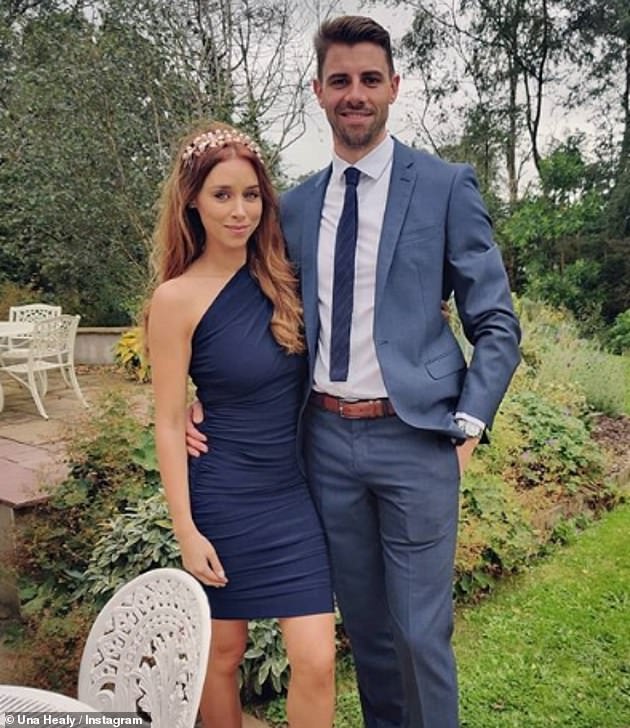 Ready to mingle! The Irish singer, who split from boyfriend David Breen last year [pictured], said she is now looking to date again and her only criteria is that they are a ‘nice person’