New Arsenal manager Unai Emery has arrived at the club’s London Colney training complex for the first time since his appointment.

The 46-year-old Emery, who left Paris Saint-Germain this summer after two years in Ligue 1, has replaced Arsene Wenger as boss at the Emirates Stadium on a three-year contract worth £5million a year.

And having been presented at the Emirates on Wednesday, the Spaniard was seen paying his first visit the the place where the majority of his work will be done. 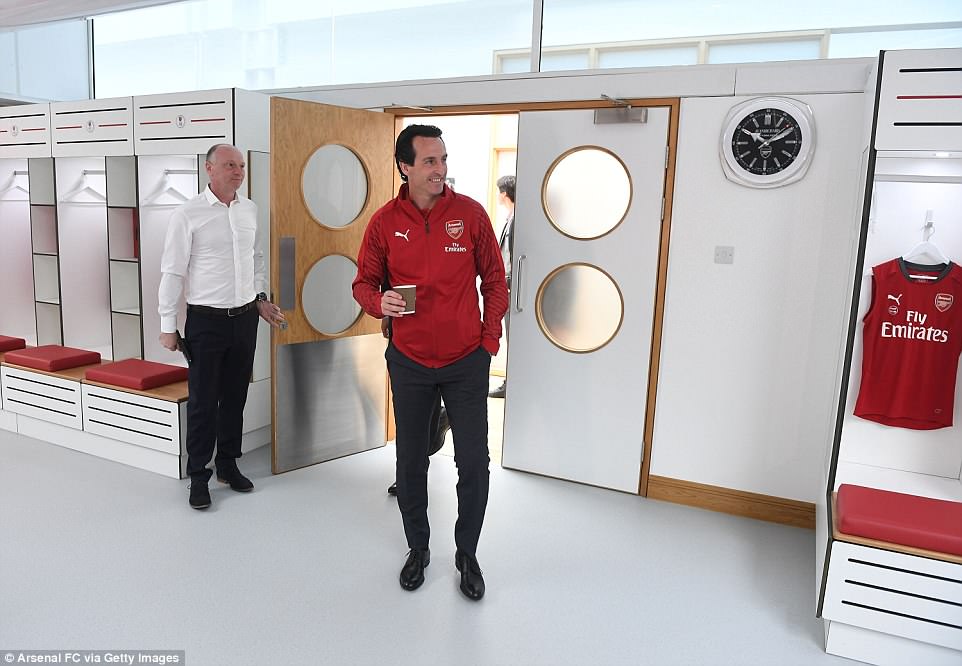 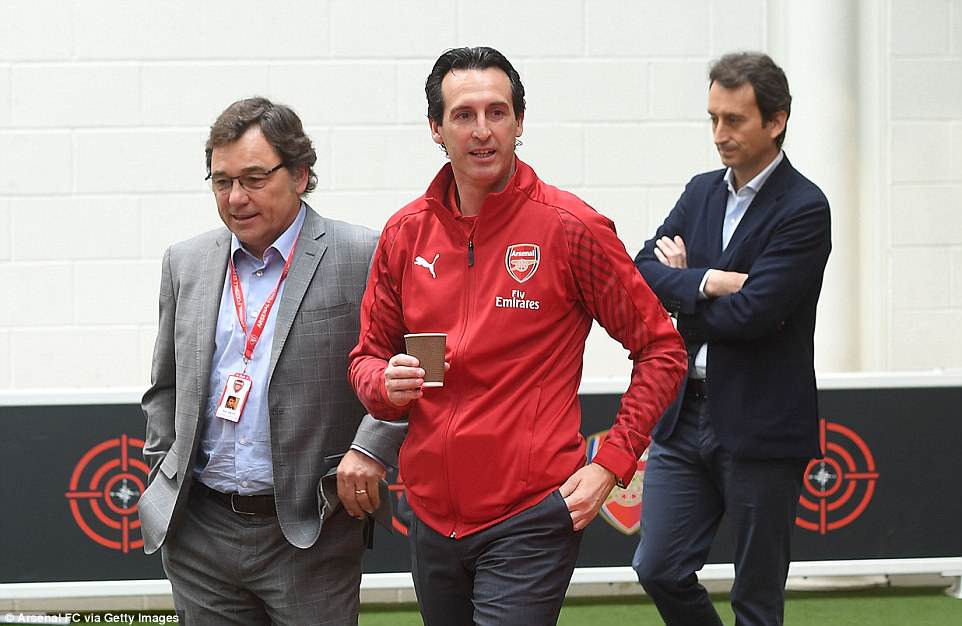 Arsenal took to Twitter to share a video of their new boss who was all smiles as he made his way inside, captioning: ‘Unai Emery arriving for his first day at the training ground’.

Joined by chief executive Ivan Gazidis and Head Of Football Relations Raul Sanllehi, Emery wore a huge smile on his face as he inspected the facilities on offer at the state-of-the-art venue.

Guided by Head Of Facilities Sean O’Connor, the former Paris Saint-Germain manager was then taken to meet injured defender Laurent Koscielny, who is working on his recovery following an operation on a ruptured Achilles.

The pair looked please to meet one-another as they engaged in an animated conservation before Emery made his way to the tactics room. 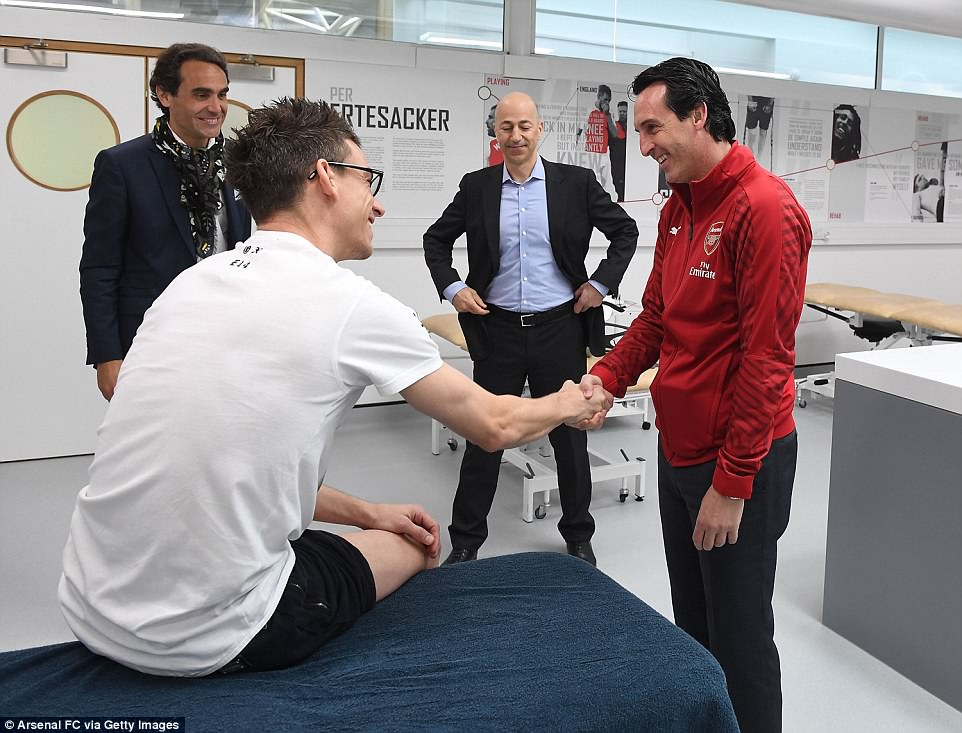 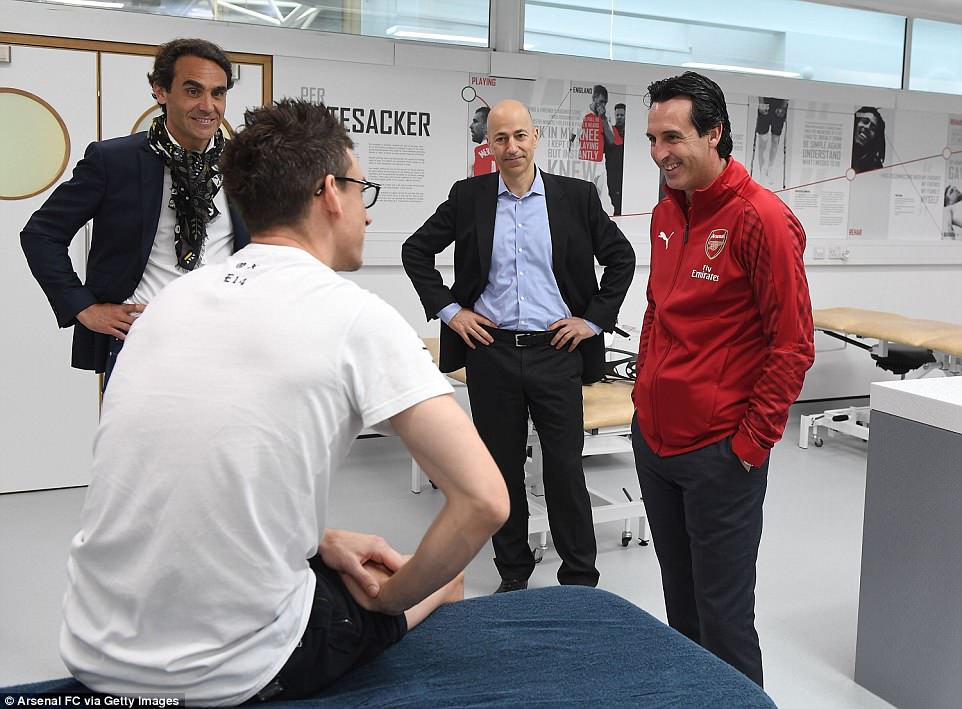 The new Gunners boss then proceeded to pretend to use the interactive whiteboard as he imagined what it would be like to issue instructions to his new set of players.

Arsenal broke the news of their new manager just after 9am on Wednesday morning, proclaiming that Emery’s announcement marked: ‘A new dawn. A new era. A new chapter.’

The Spaniard was then formally unveiled at a press conference after being given a tour of the Emirates by Gunners chief executive Ivan Gazidis.

‘I am thrilled to be joining one of the great clubs in the game,’ Emery said as he addressed the media. ‘Arsenal is known and loved throughout the world for its style of play, its commitment to young players, the fantastic stadium, the way the club is run. 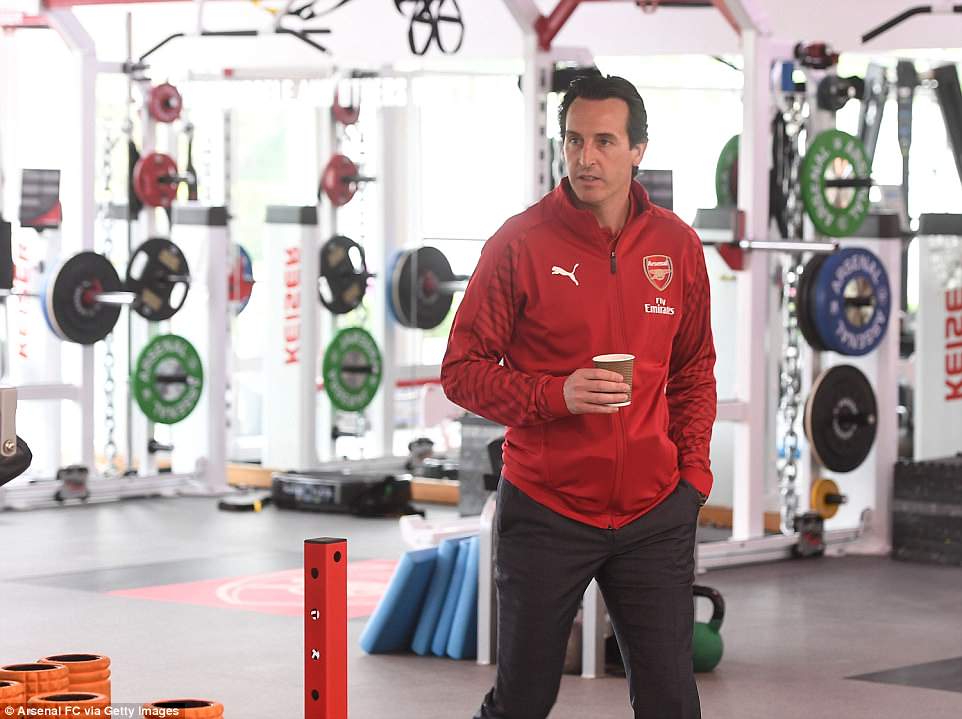 ‘I’m very excited to be given the responsibility to start this important new chapter in Arsenal’s history. I have met Stan and Josh Kroenke and it’s clear they have great ambitions for the club and are committed to bringing future success.

‘I’m excited about what we can do together and I look forward to giving everyone who loves Arsenal some special moments and memories.’ 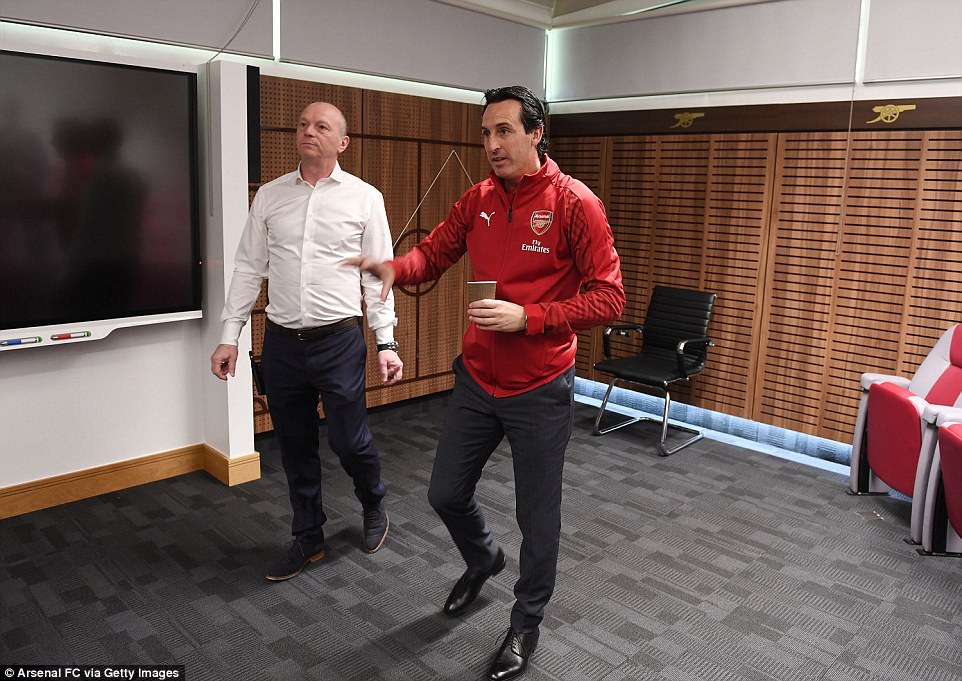 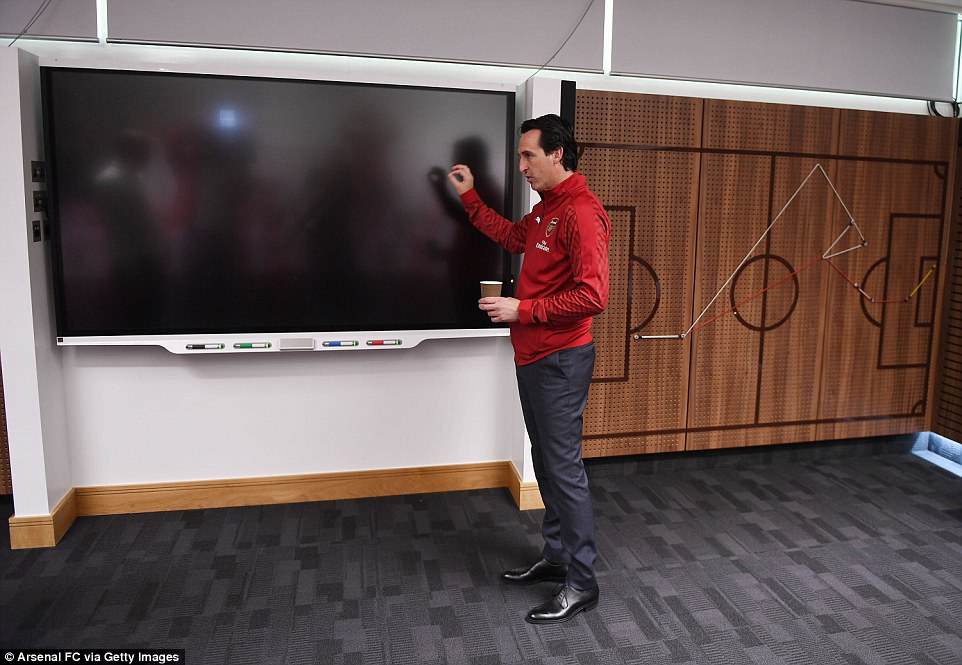 ‘That is our objective (to catch Manchester City), Arsenal is a club with fantastic personality and identity and I believe and the club has shown me that they believe,’ Emery said.

‘It is about showing that personality and showing the stature of this football club.

‘What we want to do is not fear any team neither here in the Premier League or in Europe and our objective is to be among the best and to beat the best. 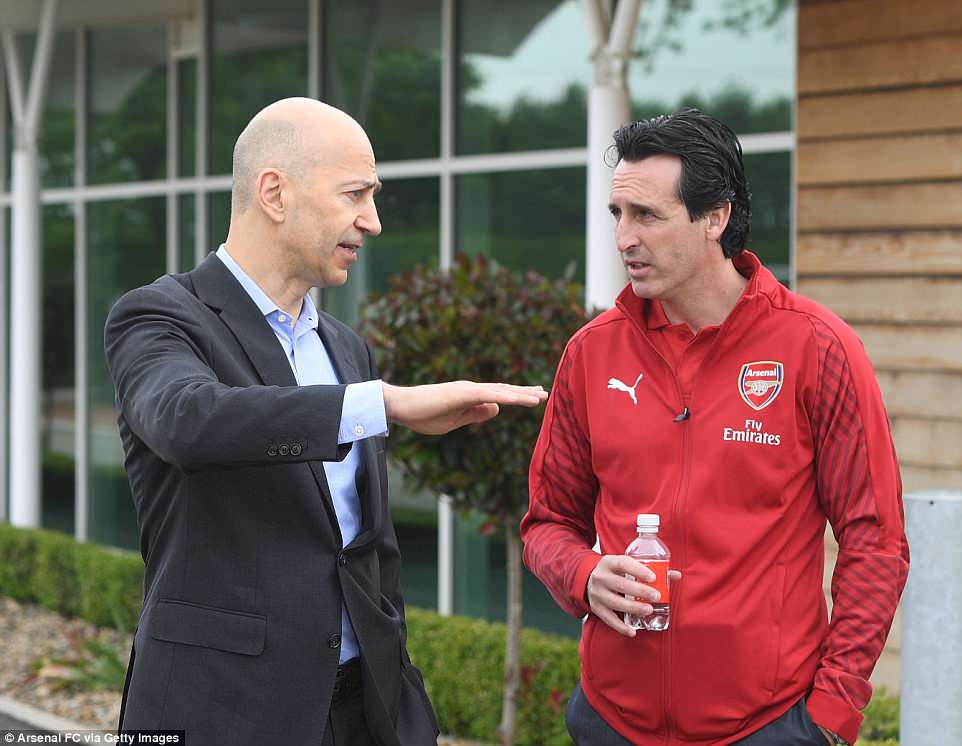 ‘I’m the type of coach who has always worked really hard, not because I do it better than anyone else but because that is what I believe the most important thing is.

‘I’m very demanding of myself, I’m passionate and I really want to transmit that to the people around me – that we can, and must, improve in the future.

‘That is the kind of thing I want to transmit, that desire to be better and I think that will lead us to improve in the Premier League and in Europe.’

Started at Real Sociedad, playing five La Liga games at left wing before making his name with Toledo in the second tier, where he would spent the bulk of his career.

Promotion to second division for first time in club’s history

Promotion to top flight for first time in club’s history