By Nick Callow For Mail On Sunday

Arsenal could crash out of Champions League contention this week, but head coach Unai Emery insists he is not under pressure and loving life in the best league in the world.

And having managed in Spain at Seville and Valencia, and France with PSG, Emery believes he is finally working at the top.

He explained: ‘It is the most competitive here. Each team gives us a difficult game and the spirit here is very high.

‘Tactically they are also improving a lot here with very good coaches, also the English coaches. I think now the championship here with 20 teams is the best.’

Arsenal had a top four place in their hands this time last week, but dismal defeats by Crystal Palace and Wolves have left them out of the top four with three matches to go.

The Leicester trip is quickly followed by Thursday’s visit of Valencia in the Europa League semi-final – Emery’s second way of getting the club back in to Europe’s elite in his first season as Arsene Wenger’s successor.

‘In my career I do not feel pressure but the demand [to do well]. I want to be demanding with the club and players because I know it’s a difficult way for us, but never I felt the pressure. I enjoy my job.’ 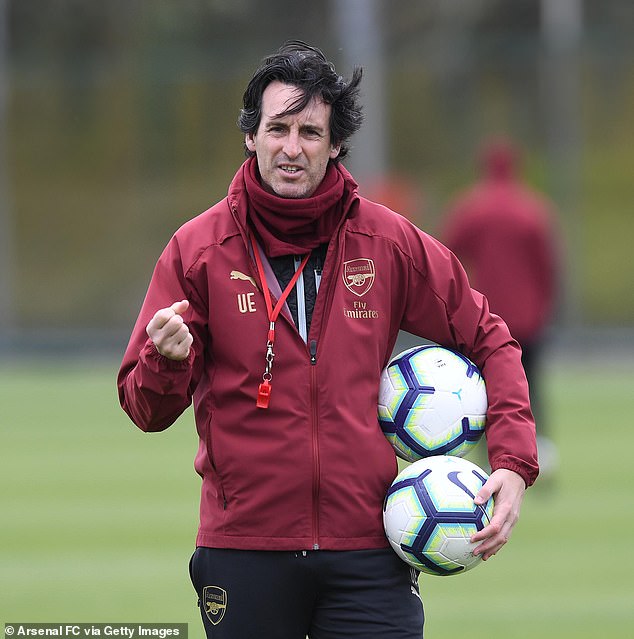 And his only focus now is getting Arsenal back into a Champions League qualification challenge at a time when some of Europe’s bigger clubs are again discussing a Super League to exclude the likes of Leicester, even though they reached the last eight two years ago.

Emery commented: ‘When I was in Spain, I looked at Leicester’s victory in the Premier League and the possibility of how that happens. They are a big club, but small in comparison (to the top six) so to win was a surprise. They have players that the best teams in Europe, the world can sign and this is good for the Premier League.

‘The Super League? I cannot speak a lot about it, but my opinion is we need to keep each domestic championship as they are and do the best European league possible.

‘I think it is normal that who wins the championship deserves to play with the best in the world.’

The last time the two coaches clashed ended in a 12-1 aggregate win for Emery’s PSG over Celtic at the end of 2017.

Emery noted: ‘This is very different. I think he is doing positive things in football as a coach and the gap is closer.’