This is the astonishing moment a brawl broke out between two voters in Queensland in a row over coronavirus.

Footage of the incident posted online shows a man wrestling with a larger man on the footpath outside the polling booth at Redbank Plains.

As the pair fall to the ground, a security officer rushes over and attempts to pull them apart as residents watched on in horror. 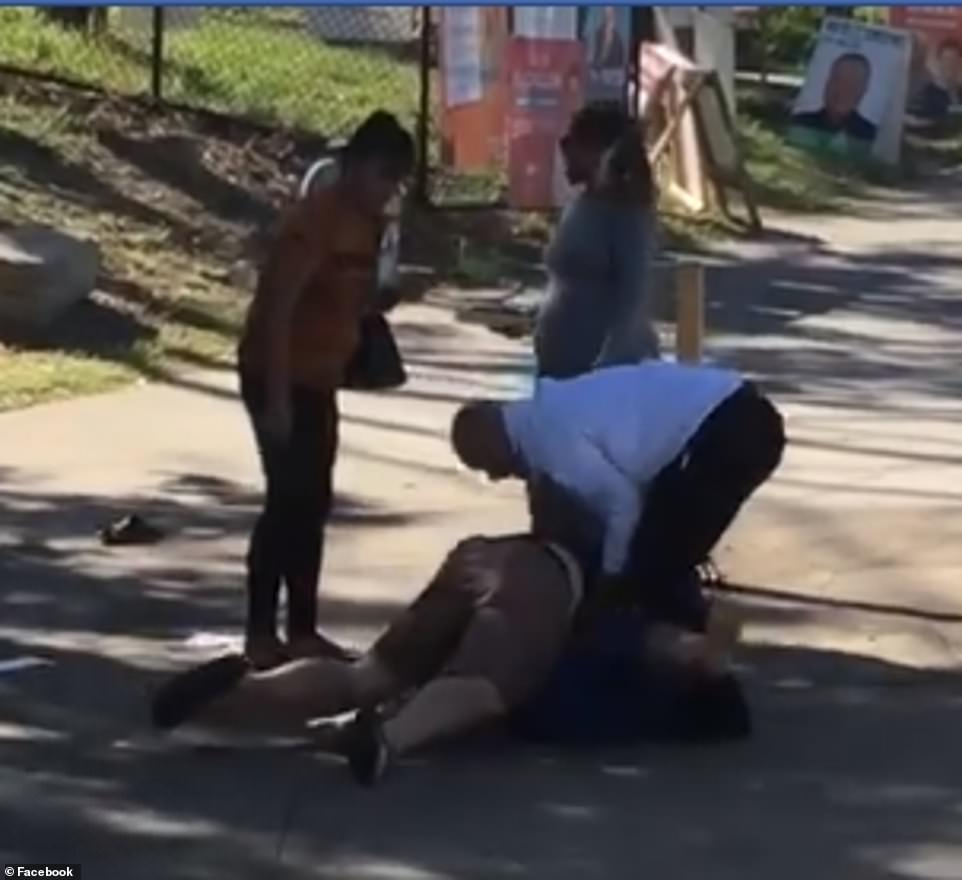 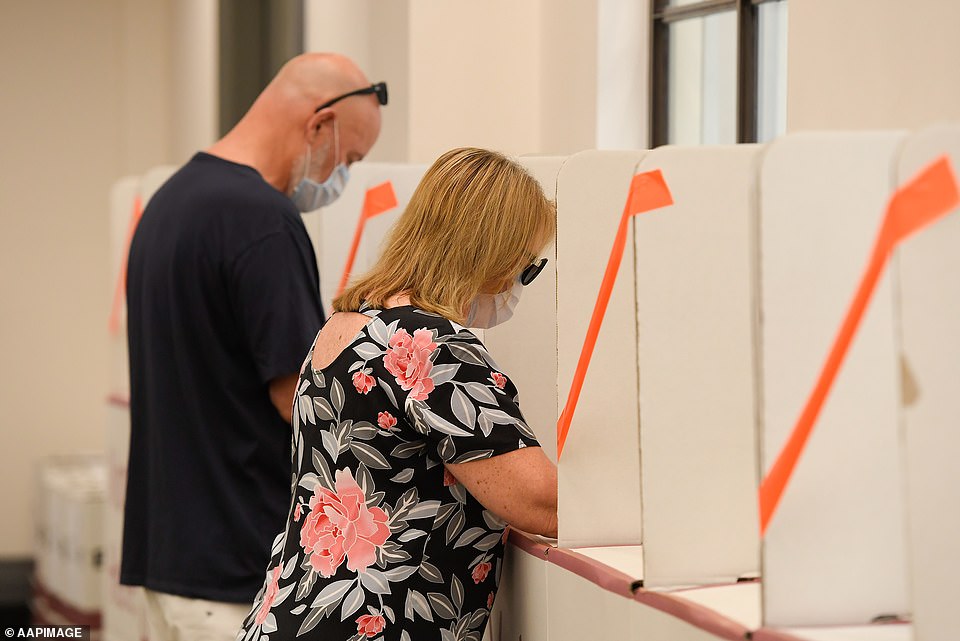 Residents were forced to vote in Queensland elections on Saturday despite widespread pleas for people to self-isolate to stop the spread of infection (Pictured: People wearing a masks are seen at Brisbane City Hall in Brisbane) 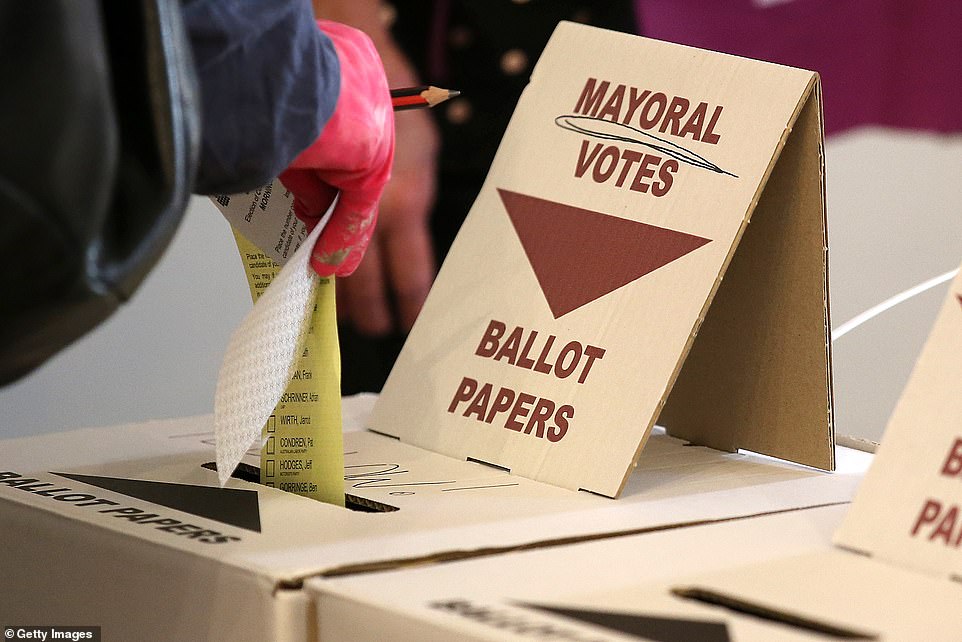 Voters were told to bring their own pens, gloves and facemasks to polling booths to protect themselves against the deadly virus

Social media users were quick to slam the pair for causing a ruckus and not adhering to social distancing amid the coronavirus outbreak.

‘Not only are they all over each other, they’ve involved an innocent security guard too. Just ridiculous…. not everyone takes the CV social distancing seriously,’ one person wrote.

‘What did the government think was gonna happen when they keep an election going during a pandemic?’ another wrote.

‘And the thin veneer of civilisation is ripped away in just days,’ someone else commented. 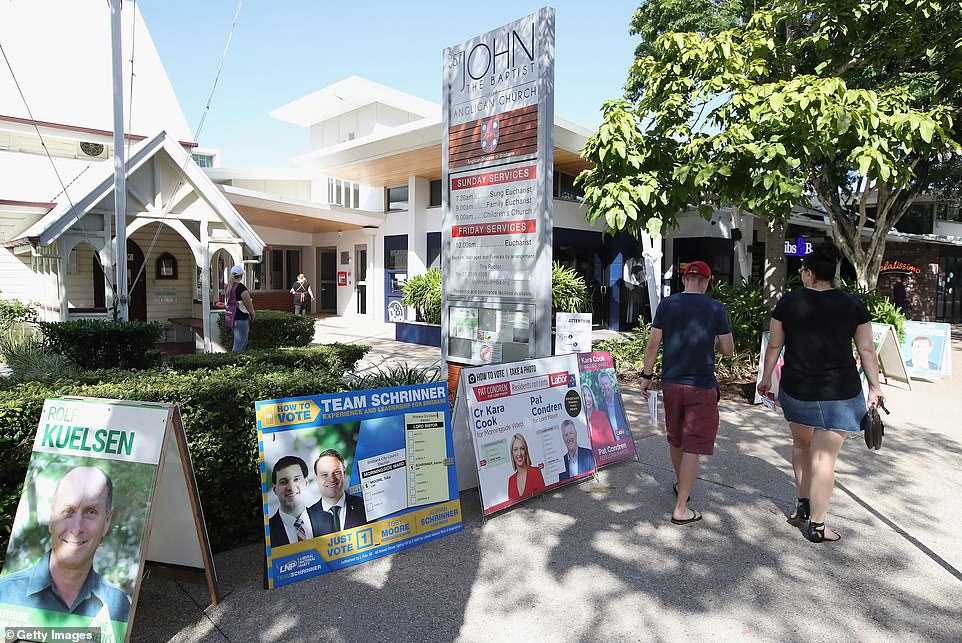 Voters arrive at a polling station in Queensland. These residents chose not to wear personal protective equipment 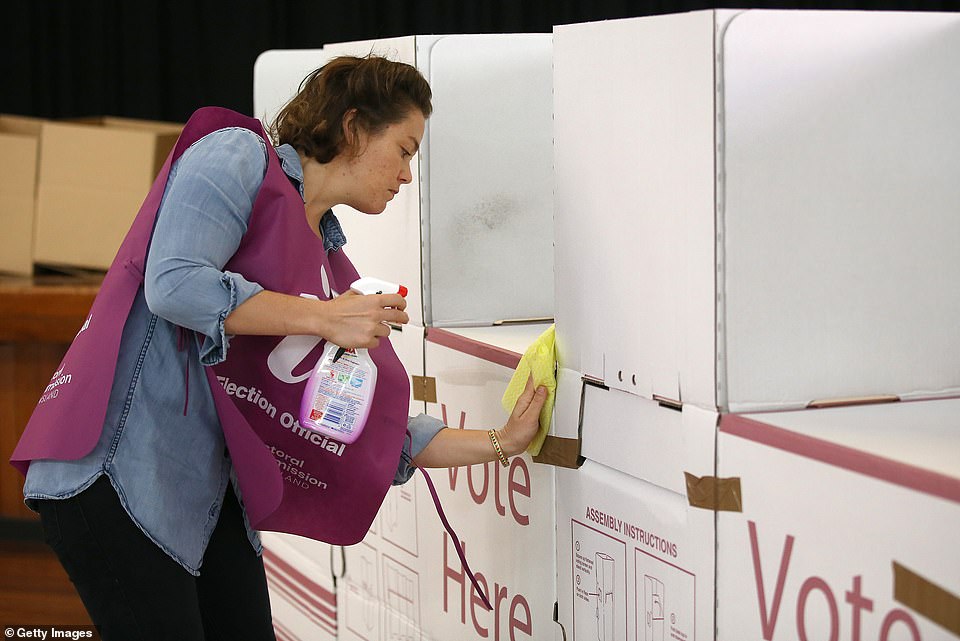 Safety first! An election official wipes down boxes with sanitiser to stop the spread of COVID-19 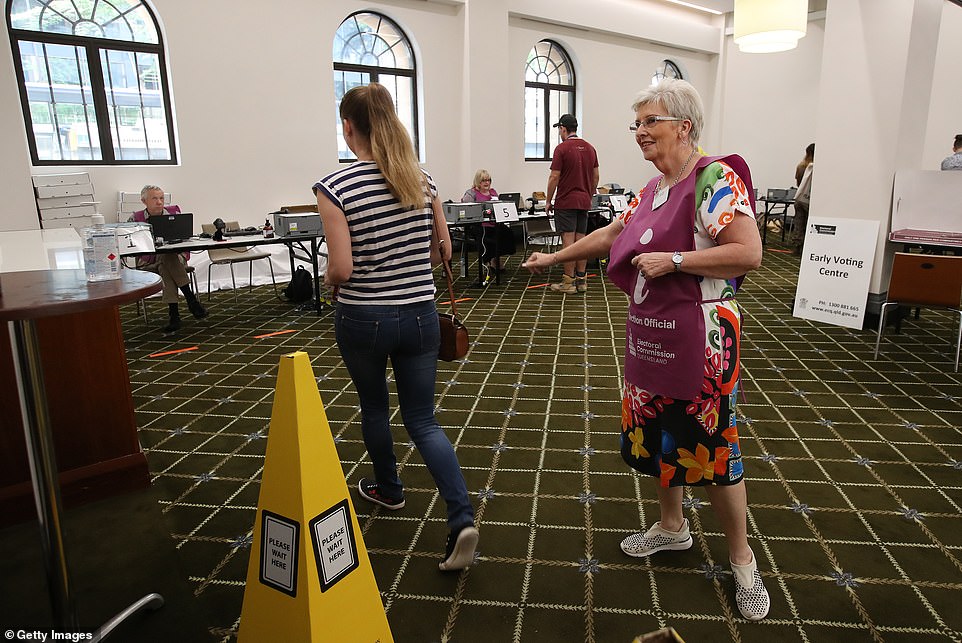 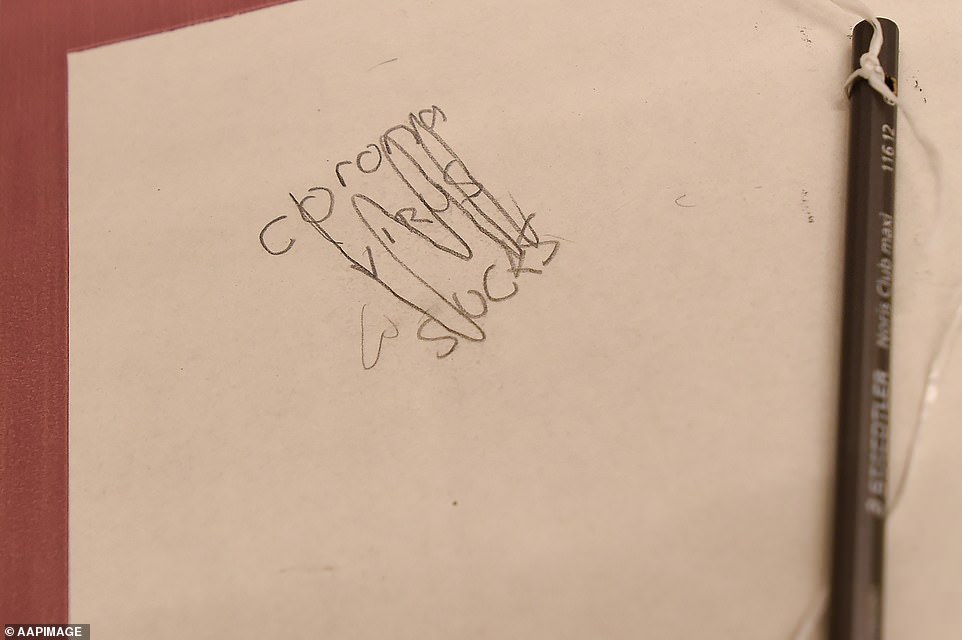 Spoiled ballot: One voter seemed to echo the sentiments of many by writing ‘corona virus sucks’ on their ballot paper 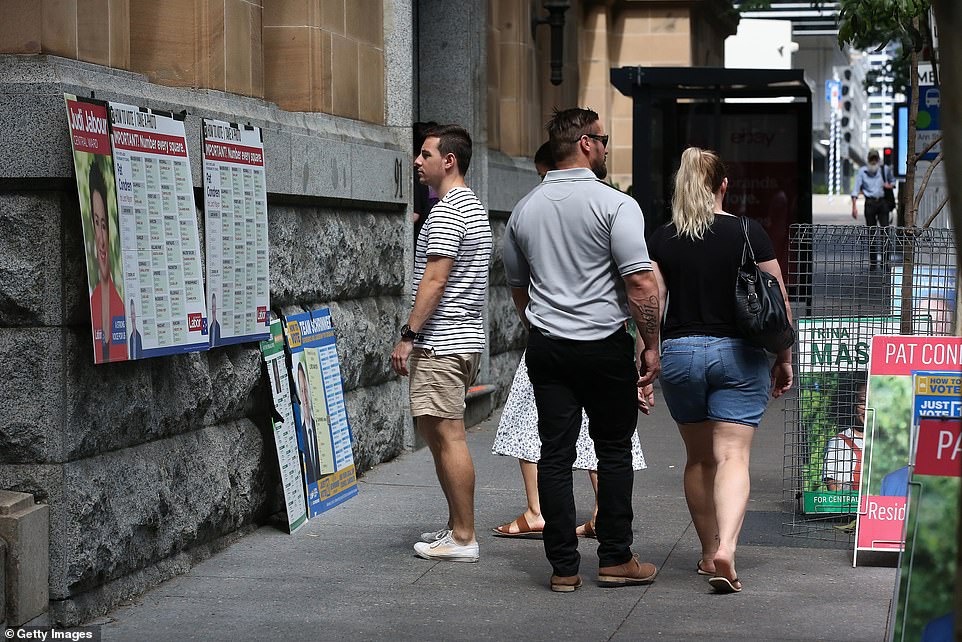 Can’t decide? One voter weighs up the candidates as he looks at election posters in Queensland on Saturday

Queenslanders were called to the election booths on Saturday despite a lockdown during the coronavirus.

Limits on the number people allowed to gather indoors mean fewer people within a polling station at any one time and potentially long queues.

Residents were also to bring their own pens and come wearing masks to prevent the spread of COVID-19.

Queensland Chief Health Officer Jeannette Young has not only this week urged everyone to ‘get in and ‘get out’ but also urged people to protect themselves from the sun.

‘If you’re sick, stay home but when you’re out and about maintain a 1.5-metre distance,’ Ms Young said.

‘And then when you go to vote … take your own pen, make sure you have the card you need for your name to be ticked off the electoral roll.

‘And while you’re standing out in those queues my only recommendation is to wear a hat and sunscreen.’

She said there would be ‘no harm’ if people adhered to a 1.5m space in an open environment. 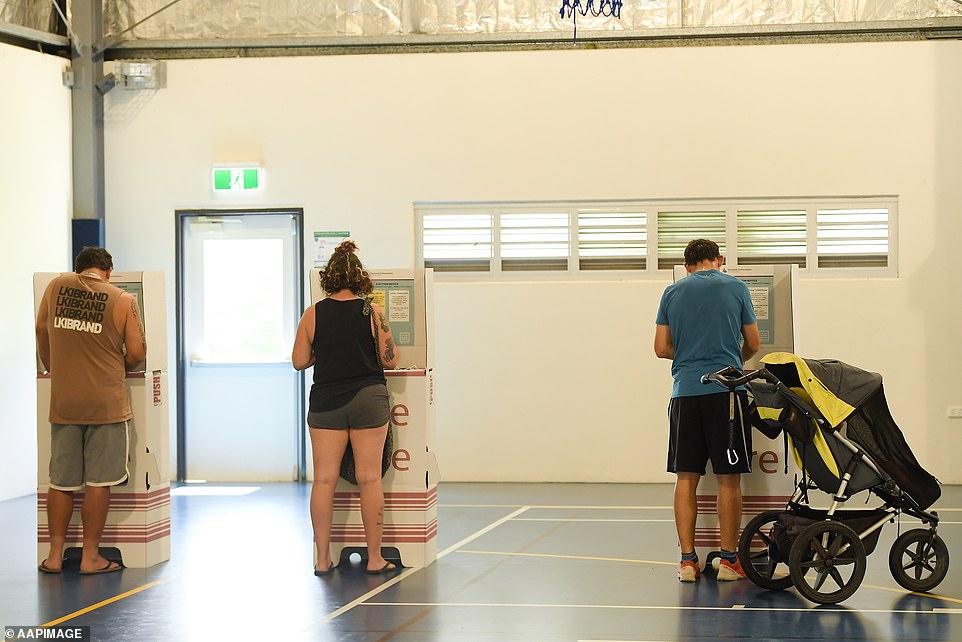 Numbers of people allowed into polling stations were limited meaning that some voters had to endure long queues (pictured: Voters fill out their ballots for the Ipswich City Count election at Ipswich Central State School) 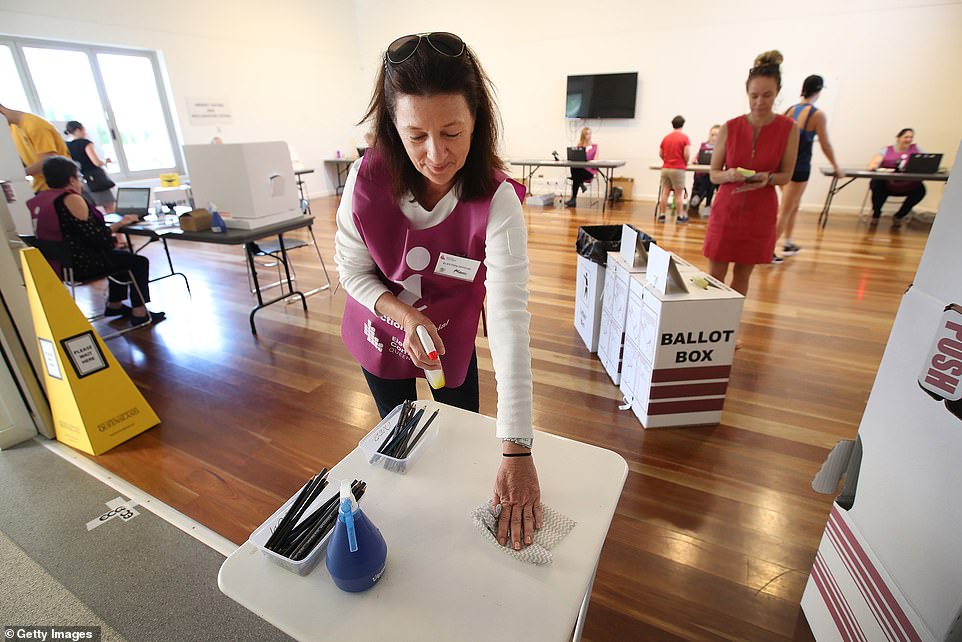 This election official is sanitising a table after a voter has cast their vote in Brisbane, Queensland 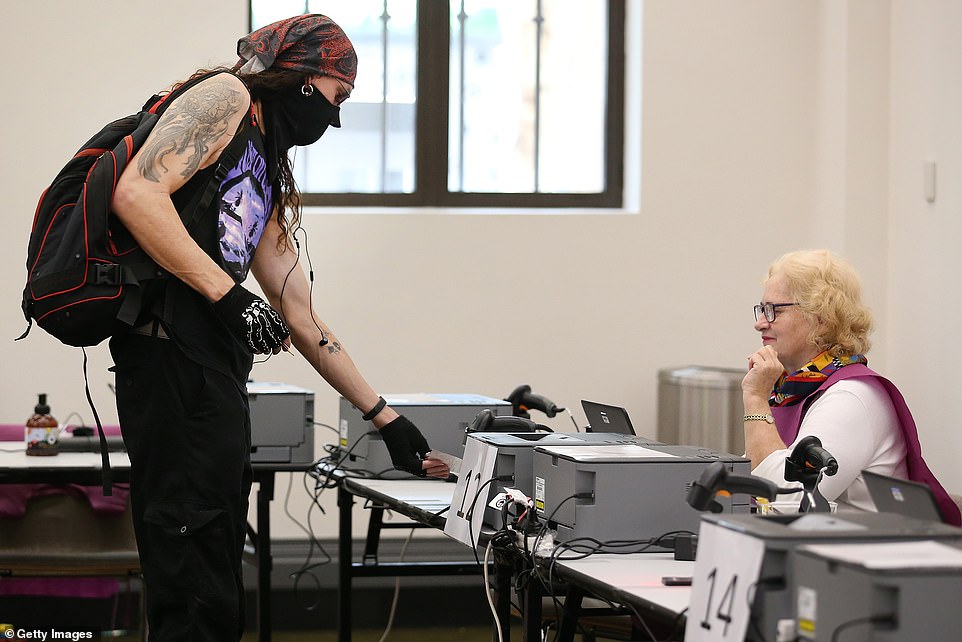 Queensland Chief Health Officer Jeannette Young has not only this week urged everyone to ‘get in and ‘get out’ but also urged people to protect themselves from the sun (pictured: A voter is seen wearing a mask as they register) 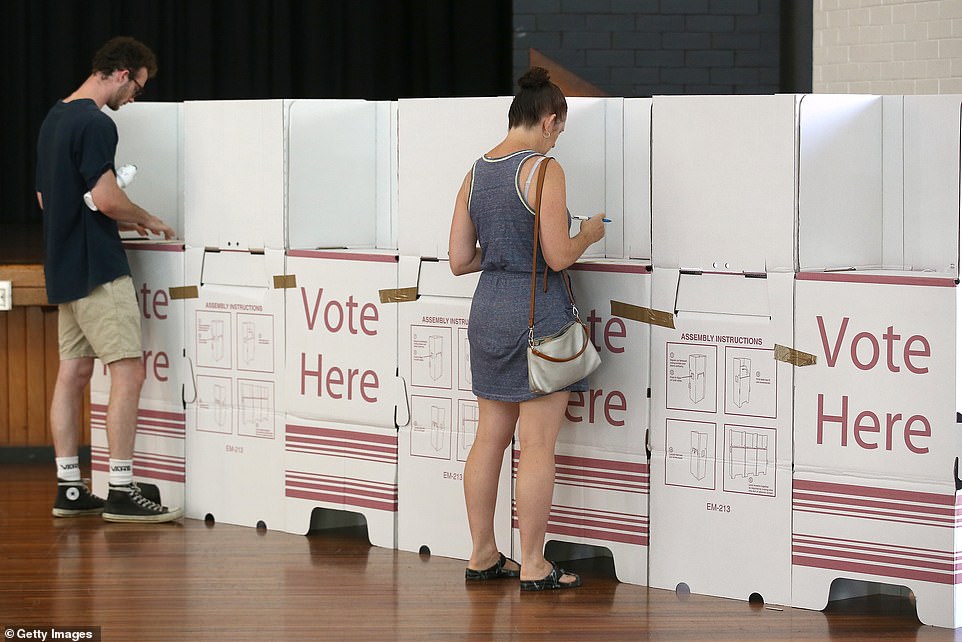 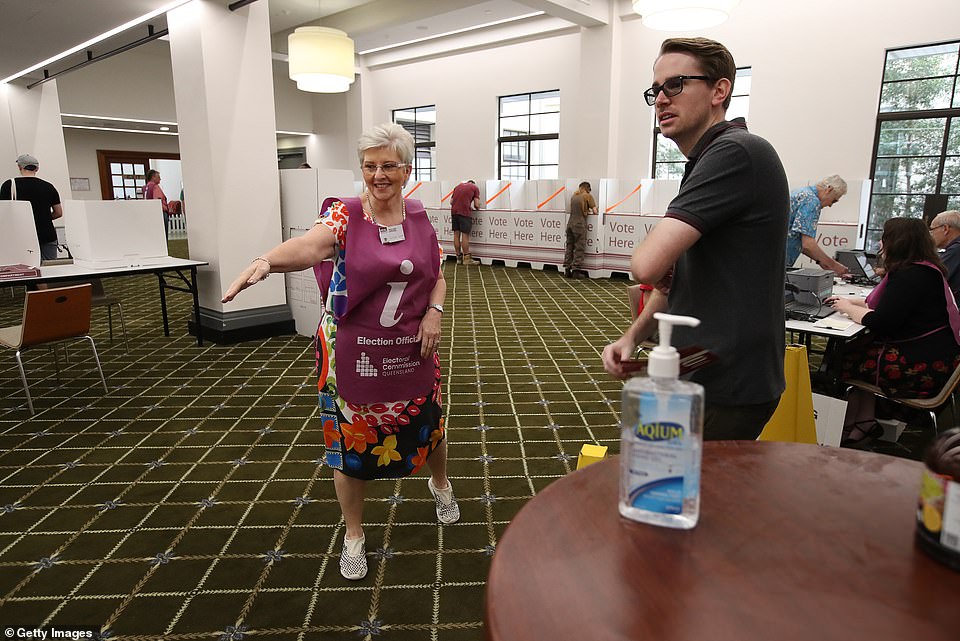 The Queensland branch of the Australian Medical Association this week recommended voters who had face masks to wear them at polling stations.

Polling booth attendances will be down after more than half of those registered to vote already visited a pre-polling station or applied for a postal vote.

The election covers 77 councils and two state electorates and brings with it a wealth of narratives after what has been a chaotic four years.

The voters in Ipswich and Logan have had their victorious mayors of 2016 either resign or be sacked following a corruption investigation.

The mayoral race in Brisbane is between LNP candidate Adrian Schrinner and Labor candidate and former journalist Patrick Condren.

Queenslanders in two-state government electorates will also be voting in by-elections at Bundamba (Ipswich) and Currumbin (Gold Coast).

Polling booths will open at 8am and close and 6pm. 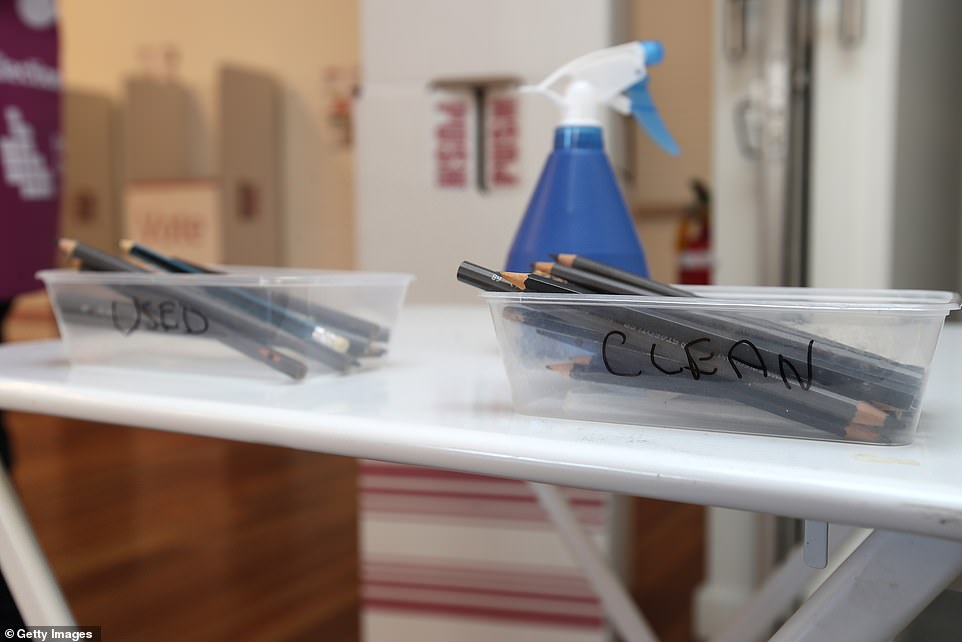 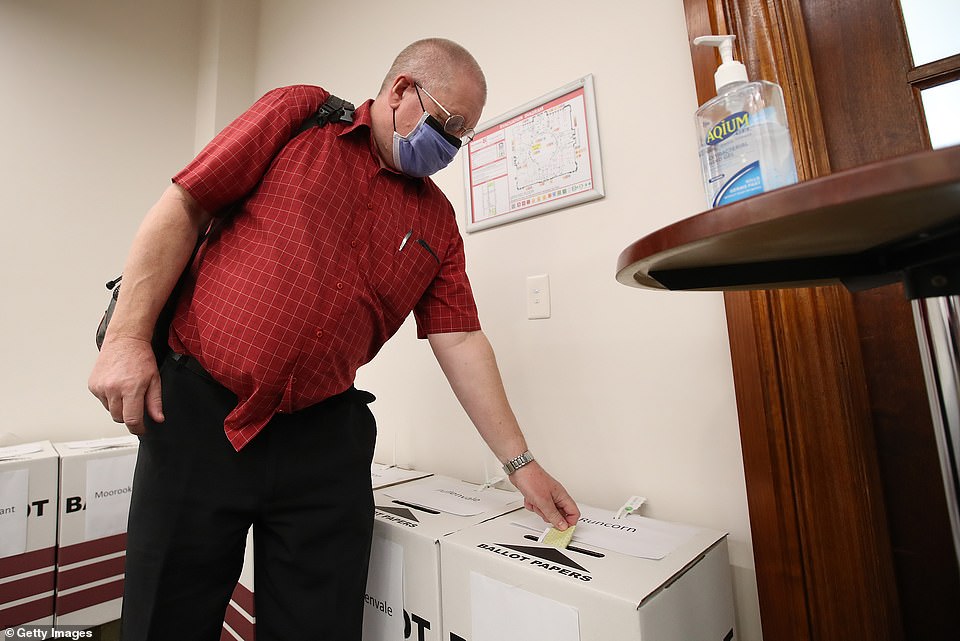 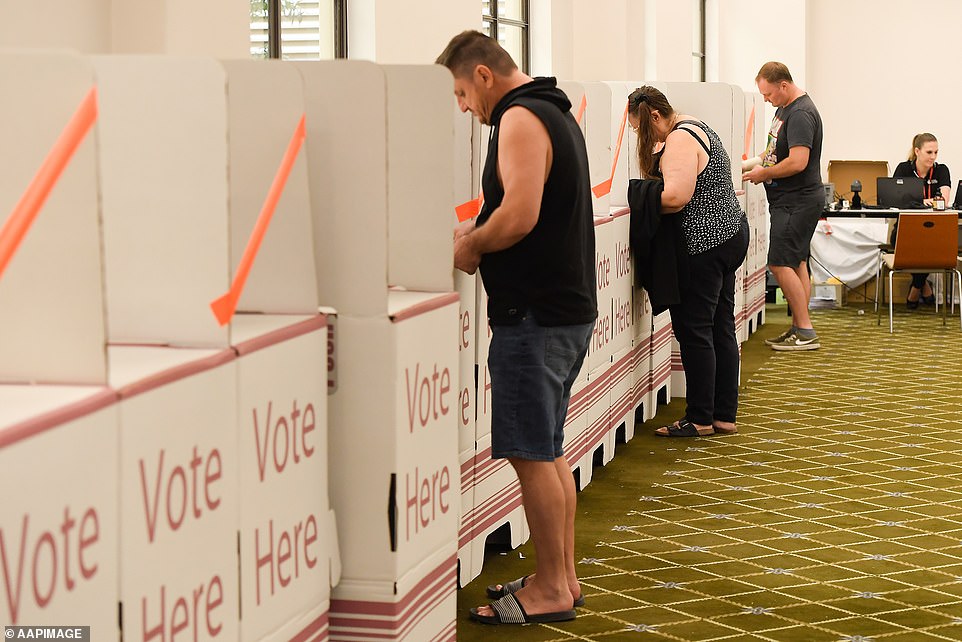 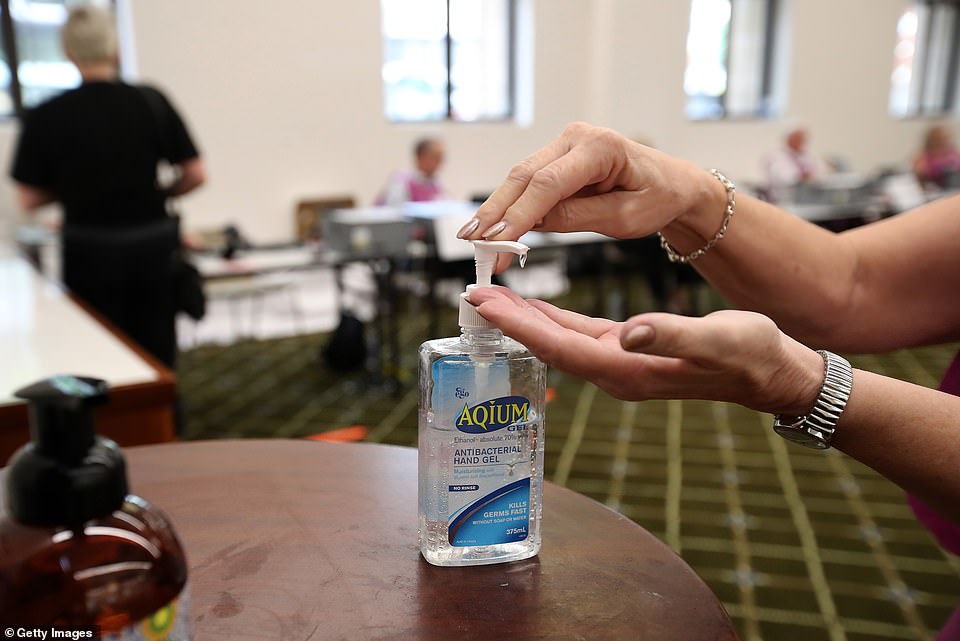 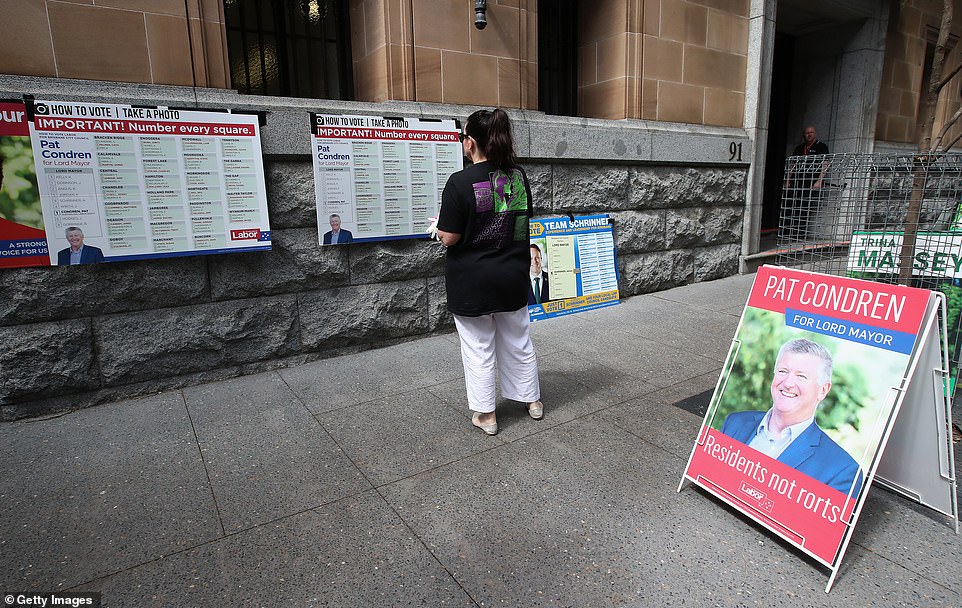