An unborn baby is believed to be among 14 people killed in a Russian air strike in northern Syria.

The foetus is said to have been blown from its mother’s womb when she was hit by shockwaves from a bomb blast, according to local reports.

The corpse was recovered from the remains of a building in harrowing scenes recorded on smartphones and shared on social media.

While The Mail on Sunday has been unable to independently verify the distressing footage, respected international observers of the Syrian conflict are convinced it is genuine.

Harrowing: The dead foetus being carried out of the destroyed building in northern Syria

Distraught aid workers also found the decapitated remains of a toddler following the strike in one of the country’s remaining rebel-held areas. A further 30 people are understood to have been injured in the blast on Friday in the town of Hass in Idlib province.

Last night, Conservative MP Richard Benyon told The Mail on Sunday: ‘Unborn babies are being pulverised by Russian bombs, yet we seem oblivious to this catastrophe on Europe’s doorstep.’

Former British Army officer Hamish de Bretton-Gordon, who has recently returned from Syria, said that Russia and Syrian leader President Assad have started a ‘scorched earth’ policy in rebel-controlled areas. He said: ‘Even unborn babies are targeted and most of the casualties appear to be children – surely nobody can claim they are terrorists. 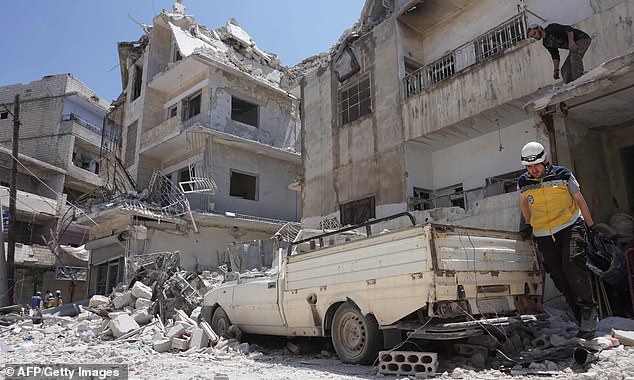 Pictured: Members of the Syrian Civil Defence (White Helmets) search through the rubble at the site of a reported air strike on the town of Ariha, in the south of Syria’s Idlib province on July 27

‘A humanitarian peace deal is required as soon as possible.’

Fighting has intensified in recent weeks in Idlib province, where more than three million refugees are understood to have sought shelter having been bombed out of their homes in other areas of Syria.

The horrifying footage from Hass comes just three weeks after children were seen dangling from the third floor of a building hit by an air strike, also in northern Syria. Heart-stopping images and video footage captured the frantic efforts to save a little girl who was about to fall to her death. She was rescued just in time.

According to aid agencies, more children have been killed in the fighting in the last month than throughout 2018. Since the conflict began in 2011, more than 370,000 people have lost their lives and millions of people have been made refugees.