An unborn baby with a life-threatening blood disorder was saved after a doctor gave him transfusions into his umbilical cord in the womb.

Edward Banham, known as Teddy, developed severe anaemia after his blood cells were attacked by his mother Emma’s immune system.

This caused Teddy to develop hydrops fetalis, which occurs when an unborn baby’s heart starts to fail and large amounts of fluid accumulate in their organs.

With Teddy desperately needing blood, an obstetrician injected donor samples into his umbilical cord just 20 weeks into the pregnancy – thought to be one of the earliest procedures ever carried out in the UK.

Teddy received a total of five transfusions before he was born at 35 weeks via C-section on February 5.

Although he arrived with a collapsed lung, the youngster is now healthy and ‘growing out of his condition’.

Baby Edward Banham had blood transfusion into his umbilical cord after he became severely anaemic. His mother Emma has rhesus disease, which caused her immune system to attack his blood cells. The mother-son pair are pictured with his father Gary and sister Elizabeth

Mrs Banham, who is married to Gary, has rhesus disease. This occurs when infection-fighting proteins called antibodies in a pregnant woman’s blood destroy her baby’s red blood cells.

The mother-of-two, 33, required similar transfusions when she was pregnant with her daughter Elizabeth.

Blood tests taken during her second pregnancy revealed the disease had struck again.

Rhesus disease can occur if a mother has the blood type rhesus negative when her unborn baby is rhesus positive.

In order to survive, Teddy required rhesus negative blood transfusions. This removed some of his own blood and replaced it with that of suitable donors.

Dr Amarnath Bhide, consultant in obstetrics and foetal medicine, used a 15cm-long needle to inject the blood into the umbilical cord, which was no easy task.

‘You lay as still as you can,’ Mrs Banham told the Evening Standard.

‘If you are breathing normally, you are taking deep breaths and it’s hard for the doctor to hold the needle.

‘For the last one I felt like I was going to lose consciousness.’

Dr Bhide had carried out the procedure before. However, due to Mrs Banham only  being 20 weeks along, the umbilical cord was small, which raised the risk of complications.

The medic claims most babies usually only require out two transfusions, starting at 28 or 29 weeks. However, Teddy underwent five between weeks 20 and 32.

The procedure may need to be carried out several times if tests show a high amount of the substance bilirubin in the body. Bilirubin is created when red blood cells break down.

Teddy was born at at St George’s Hospital, south London, and has since undergone a further four infusions.

Mrs Banham claims he is growing out of the condition, which most babies do after around three months old. 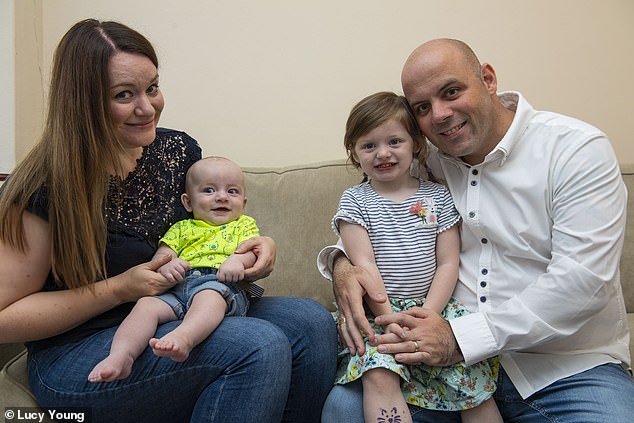 Mrs Banham (pictured with her family) also required umbilical transfusions while expecting Elizabeth. She underwent the procedure just 20 weeks into the pregnancy, which is thought to be one of the earliest umbilical blood transfusions ever carried out in the UK

WHAT IS HYDROPS FETALIS?

Hydrops fetalis is defined as severe swelling in an unborn baby or newborn.

This is usually ‘nonimmune’ and comes about due to other diseases that affect how a baby manages fluids.

Nonimmune hydrops can be triggered by severe anaemia, infections in the womb, heart or lung defects, chromosomal abnormalities or birth defects, or liver disease.

Immune hydrops can develop if a mother has the blood type rhesus negative when her baby is rhesus positive.

This can trigger rhesus disease, which occurs when the woman’s immune system attacks her unborn baby’s red blood cells.

This causes anaemia, which can lead to hydrops if the baby cannot overcome the condition.

Immune hydrops is defined as the baby’s heart starting to fail, and fluid accumulating in its tissues and organs.

This form of the disease is less common due to it being detected in pregnant women’s blood tests.

If the mother is rhesus negative, the NHS offers injections to neutralise any rhesus positive antigens that may have entered her blood.

If hydrops does develop during pregnancy, symptoms may include:

After birth, symptoms may include:

The severe swelling that occurs with hydrops can overwhelm a baby’s organs. Around half of unborn babies with the condition do not survive.

Unborn babies may be treated with light therapy, blood transfusions and neutralising injections.

Newborn babies are often first treated with oxygen or breathing machines. Excess fluid is then removed from around their organs via a needle.