Uncle Vanya review: It’s a perfect blend of the tragic and absurd

Chekhov’s Uncle Vanya should have been played by John Cleese in his prime. The sarcasm and his manic outbursts make Vanya a Russian prototype Basil Fawlty. That said, Toby Jones is terrific in the part.

He’s withering and hilarious, his hair like a wheat field after a typhoon.

Vanya has been running the estate thanklessly for his brother-in-law, Serebryakov (Ciarán Hinds), a pompous professor who has returned with Yelena, his glamorous, much younger new wife, and with plans to flog the property and buy a villa in Finland.

The unmarried Vanya boils at the injustice of it all. 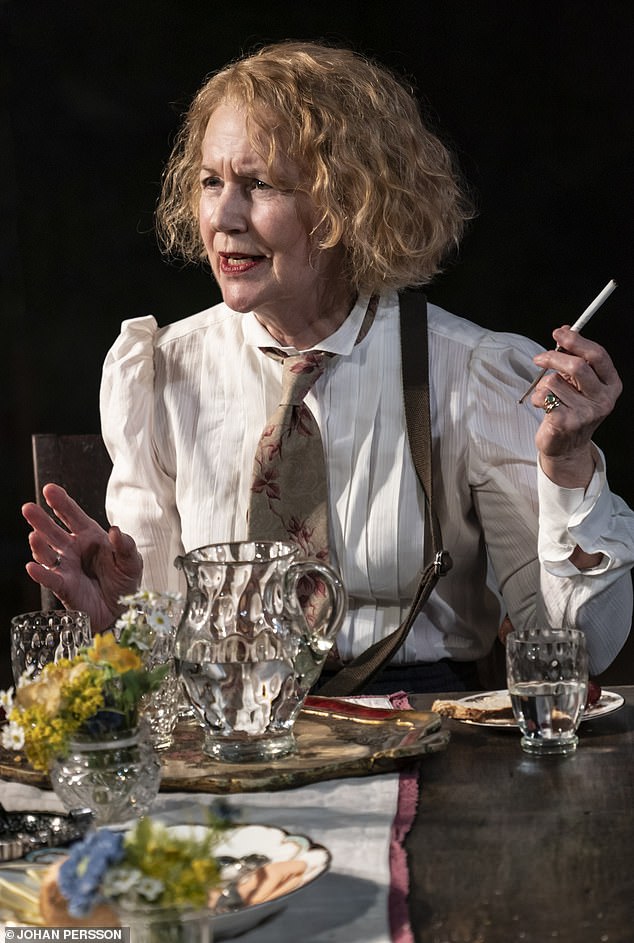 The production is decked out with a fine cast, with Dearbhla Molloy (above) as Vanya’s stately but bohemian mother

Yelena (Rosalind Eleazar) has realised she’s married a crashing bore and latches on to Astrov, the handsome, alcoholic doctor (Richard Armitage) with a passion for trees. Vanya falls for Yelena but he’s got no hope; never had.

Sonya, Vanya’s niece – played heartbreakingly by Aimee Lou Wood – is utterly smitten with Astrov, who barely even notices her. The stage is thus set for a giant bonfire of romantic illusions.

Conor McPherson’s version of this 1898 play intrusively uses the feminist word ‘agency’ and adds the F-word. I wasn’t sure, either, what the director Ian Rickson was trying to do with this dimly lit version, which has characters delivering speeches as bolted-on, un-Chekhovian soliloquies. 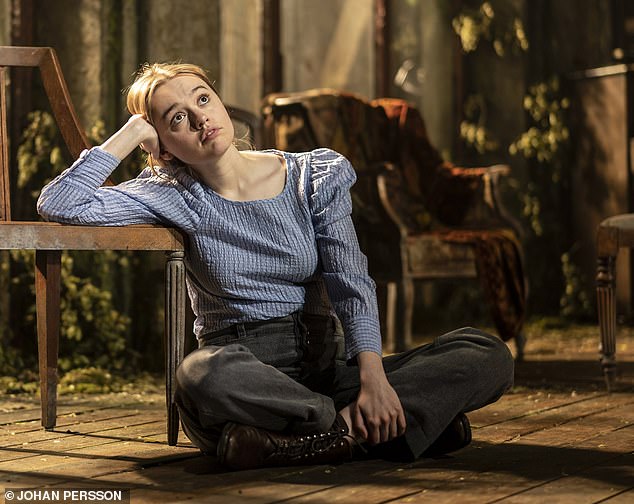 Sonya, Vanya’s niece – played heartbreakingly by Aimee Lou Wood (above) – is utterly smitten with Astrov, who barely even notices her

But the production is decked out with a fine cast, with Dearbhla Molloy as Vanya’s stately but bohemian mother, Mariya, Anna Calder-Marshall as the old retainer, Nana and Peter Wight as a futile estate employee.

But Toby Jones’s wonderfully funny Vanya is the real pay-off. When he comes on with a gun, he fires at the author of his woes and misses – twice – before slumping in self-disgust that he can’t even shoot straight.

It’s a perfect blend of the tragic and the absurd, as the play – and the century – closes in on the lot of them.

Terrible rural accents alert! We’re in East Anglia, 1759. The cast does a semi-audible local dialect that’s beyond awful. To err is human but to ‘ahhrrr’ is less forgivable.

The story? The noose awaits a young woman accused of murder. She claims she’s pregnant and, if so, her sentence must be commuted. Is she lying? A ‘jury of matrons’ decides her fate.

Instead of a gripping courtroom drama, Lucy Kirk-wood’s play is actually an eventless, veiled critique of today’s patriarchy done in Poldark costumes. At one point a crow comes down the chimney, causing an explosion.

The ladies in grey are covered head to toe in black soot. 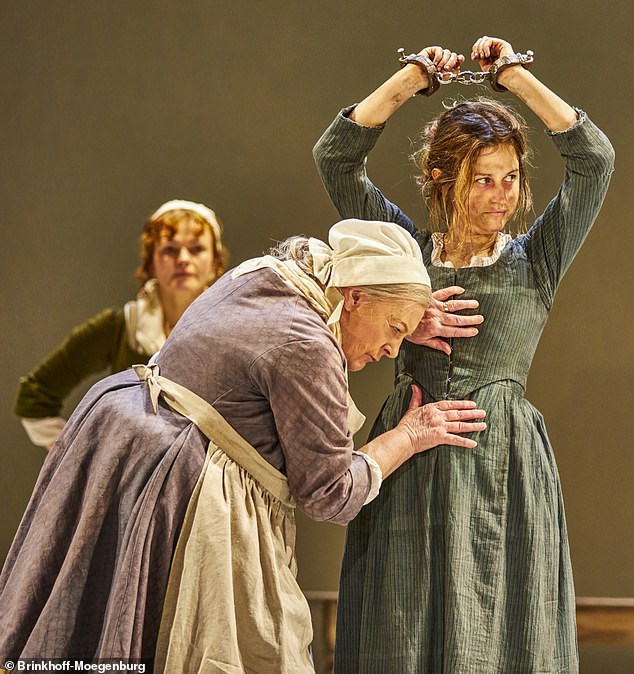 There’s a sniff of some evidence of the excused being pregnant when Sally Poppy (Ria Zmitrowicz, above with June Watson) expresses black milk

Maxine Peake heads up the sweary cast as the accused’s supportive midwife. There’s a sniff of some evidence when the accused Sally Poppy (Ria Zmitrowicz) expresses black milk.

Perhaps it’s all that soot. More baffling is why these Georgian women suddenly sing Kate Bush’s Running Up That Hill.

Director James Macdonald stuffs the evening with fancy visuals but it doesn’t help.

A black guy stops a white professor from jumping under a subway train and takes him home to his Manhattan tenement. There’s a Bible on the table. The suicidal prof asks him: ‘Tell me, do you think Jesus is in this room?’

What follows is a sustained wrangle about God and the purpose of living. American novelist Cormac McCarthy’s wordy play often feels like a talking book. But Terry Johnson’s production has emotional clout – and it’s largely because Gary Beadle (ex-EastEnders) is so appealing and funny as the reborn ex-con; while Jasper Britton exhales despair as the professor who’s so envious of the dead. 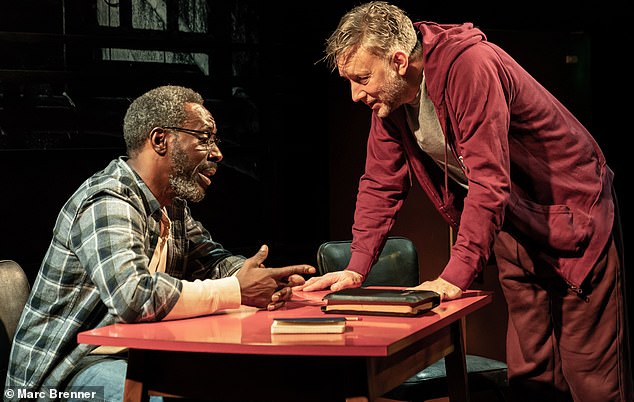 Terry Johnson’s production has emotional clout – and it’s largely because Gary Beadle (ex- EastEnders) is so appealing and funny; while Jasper Britton exhales despair as the professor

True, the ending is an almighty downer. But this short, brilliantly acted battle of hope versus futility has moments of really piercing insight.

Samuel Beckett is gloomier than a global-warming forecast. But these three short plays grab you by the lapels.

In Krapp’s Last Tape, James Hayes plays an old, failed writer hunched over a tape recorder, on which he listens to his 30-year-old audio diary. I last saw Krapp wonderfully played by John Hurt.

With Hayes, too, you can almost see the dust of an unlived life pouring from his mouth. 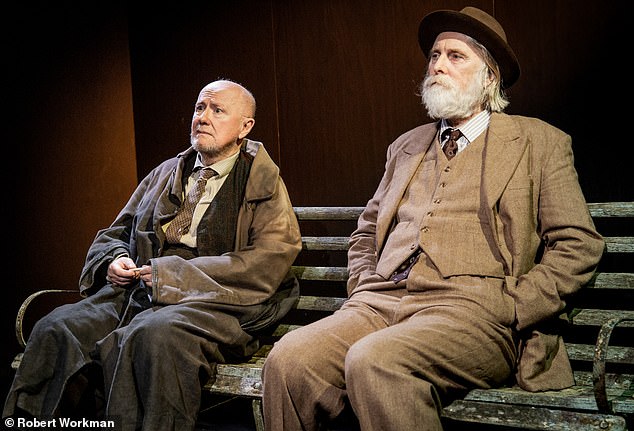 Shameless star David Threlfall is splendid in tweeds opposite Niall Buggy in The Old Tune, a garrulous, delightful Irish piece about two oldsters sitting on a bench

Niall Buggy is in Eh Joe, sitting on an unmade bed, eyes filled with horror as a taped voice (Lisa Dwan’s evocative brogue) accuses him of abuse of a young woman. Somehow he was complicit in her misery.

He says not a word but his magnificently haunted face tells this terrible, ambiguous tale.

Shameless star David Threlfall is splendid in tweeds opposite Buggy in The Old Tune, a garrulous, delightful Irish piece about two oldsters sitting on a bench trading faulty reminiscences. You wonder if Beckett ever thought of giving it to the Two Ronnies.

In Trevor Nunn’s production, each play feels as brief as a birthday candle and unforgettably etched.

This is the first revival of Lucy Prebble’s 2003 debut, and while it feels smaller-scale than later work such as the big hit ENRON, it is just as curious and human.

We’re back in the dial-up internet years of the Noughties, when 17-year-old Dani seeks solace in chatrooms from a troubled home life and an eating disorder. One contact is thirtysomething Tim, who initially thinks Dani’s a boy; he has a criminal record for paedophilia.

But this isn’t a play about grooming – Dani takes the lead in their friendship, naively believing she can help him. 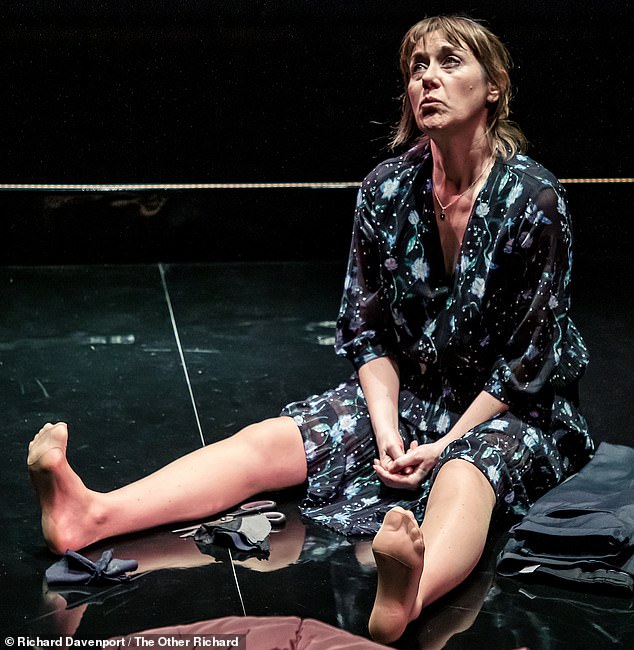 Digital life has evolved radically since the play was written, but Oscar Toeman’s production nails the fact that relationships are knotty (Alexandra Gilbreath as Dani’s mother Jan, above)

As Dani, Jessica Rhodes has a spark that works well with Prebble’s punchy script. Digital life has evolved radically since the play was written, but Oscar Toeman’s production nails the fact that relationships are knotty, online or offline.